Sherlock and Watson have finally made it to Vienna to meet Dr. Sigmund Freud where Freud hopes to treat Sherlock’s cocaine addiction. Will he succeed and what can the two men learn from each other? How does it fare?

David and Scott Tipton masterfully display the consequences of cocaine addiction for Holmes. He has become so blinded by his addiction, his remarkable deductive abilities are unable to deduce the reason he has been brought to Sigmund Freud. They do this through some wonderful verbal sparring between Freud and Holmes that leads Holmes to confess to his addiction.

After his confession, Holmes agrees to treatment where David and Scott move away from the verbal sparring and logic chains to hit you in the stomach with emotions. The struggle Holmes faces during his withdrawal is dramatic and displays even the greatest minds can be lost to addiction, hurting and wounding their friends in the process.

Not only does the book address addiction, but it also examines anti-Semitism in an exchange focusing on Freud and a young upstart at a tennis club. The exchange highlights Freud’s maturity, but his observation skills as well. It also showcases that one must defend oneself against bullies, but it does not have to be physical confrontation.

The second half of the book moves away from exploring personal and social issues to begin a detective story. There is a mystery to be solved and Holmes’ mind is necessary to solve the case. It also brings Holmes out of his lethargy and boredom, which caused him to turn to cocaine in the first place. His mind is once again focused and sharp. His observation skills are at their height as he begins to look into a case involving the Baron Von Leinsdorf and his newly-wed American wife, Nancy Osborn Slater von Leinsdorf. 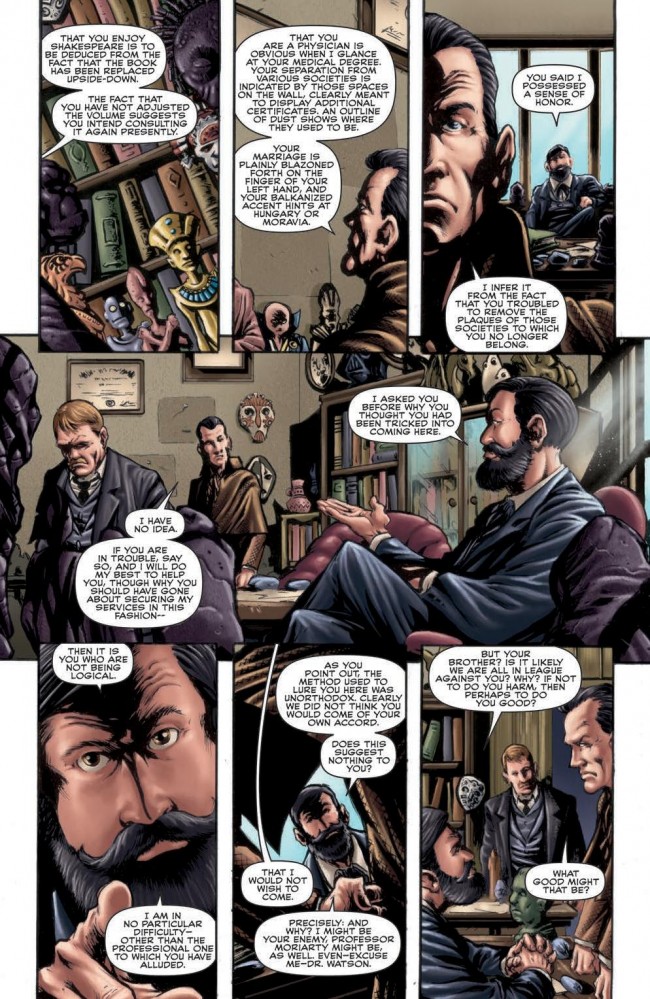 The writing here can be a little daunting and there is one page where the word bubbles take up over two-thirds of the panels. Yet, the dialogue is necessary. It shows Holmes’ state of mind as he and Watson discuss possible scenarios and logically eliminate them one by one. There was one part of the script that seemed to abruptly end. Holmes and Freud are interrogating a woman claiming to be the late Baron Von Leinsdorf’s new bride. She is answering all of their questions until suddenly Freud snaps his fingers telling her to sleep. It stops the flow of the interrogation in its tracks. On a separate note, this new case also begins to showcase the pride and respect Holmes and Freud have for each other’s work.

Ron Joseph’s artwork is what we have come to expect from the series. There are some solid panels with great facial expressions. One of those is when Freud hypnotizes Holmes with his pocket watch. Holmes’ expression is fantastic as he stares at the stop watch his mind wandering off to sleep. There was one panel that did stand out and it was one of the few action panels where Watson is forced to strike Holmes. The artwork depicts Watson backhanding Holmes with a clenched fist. It looks awkward as if Joseph couldn’t decide whether Watson was going to open hand smack Holmes or give him a good fist to the face. 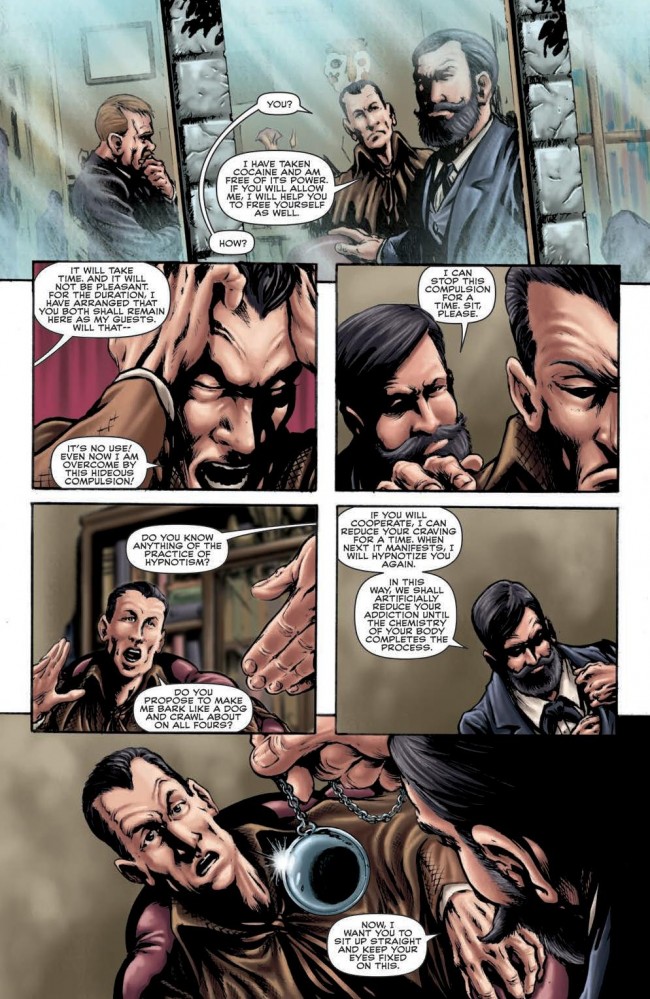 [easyazon_link identifier=”B0155M09EY” locale=”US” tag=”bounintocomi-20″]Nicholas Meyer’s Seven-Per-Cent Solution #3[/easyazon_link] is the best book in the series so far. It combines a personal examination of Holmes and his addiction with a compelling and interesting detective story that not only will require Holmes to be at the top of his game, but Freud as well. The dialogue is well-crafted with a really good verbal spar between Holmes and Freud in the beginning and later with Holmes and Watson logically deducing potentialities; although, the latter is a little heavy and slows down the pace of the book quite a bit.