Newborn Aliens have hatched inside Vampirella and her exploration team leaving the majority of them dead. Vampirella and Lars, the last two remaining of the original expedition team, plan to hunt down the Aliens to prevent them from reaching the surface. Meanwhile, a second team is en route to the ruins. Will they prove helpful? How does it fare?

Writer Corinna Bechko begins [easyazon_link identifier=”B0158NAFZS” locale=”US” tag=”bounintocomi-20″]Aliens / Vampirella #2[/easyazon_link] on a light-hearted note, delivering some stinging banter between shipmates who have become a little grouchy being stuck with each other on a spaceship for so long. It catches you off-guard a little bit and makes you a tad too comfortable; ripe for being frightened!

Not only does Bechko bring the horror, but she is also able to masterfully remind readers of what happened in the previous issue without a recap or summary in the beginning of the book. Instead, she incorporates it into the current story by using Lars’ point of view.

Bechko also complicates matters with the arrival of the second team. Despite the trust and faith Vampirella’s original team had in her, there is still a huge lack of trust and quite a bit of fear of Vampirella. This is an interesting dynamic Bechko introduces. Not only are the Aliens monsters to be feared, but Vampirella is a monster herself and should be feared and, possibly, the only way to defeat monsters is with a monster of your own.

After the entertaining dialogue between the second crew in the beginning, Bechko struggles a bit with the conversation between Lars and Vampirella. Vampirella goes off on a monologue about how Lars needs to let her suck his blood for a number of different reasons. She is trying to convince him to allow her to do so. However, he never does; but she sucks his blood anyways. 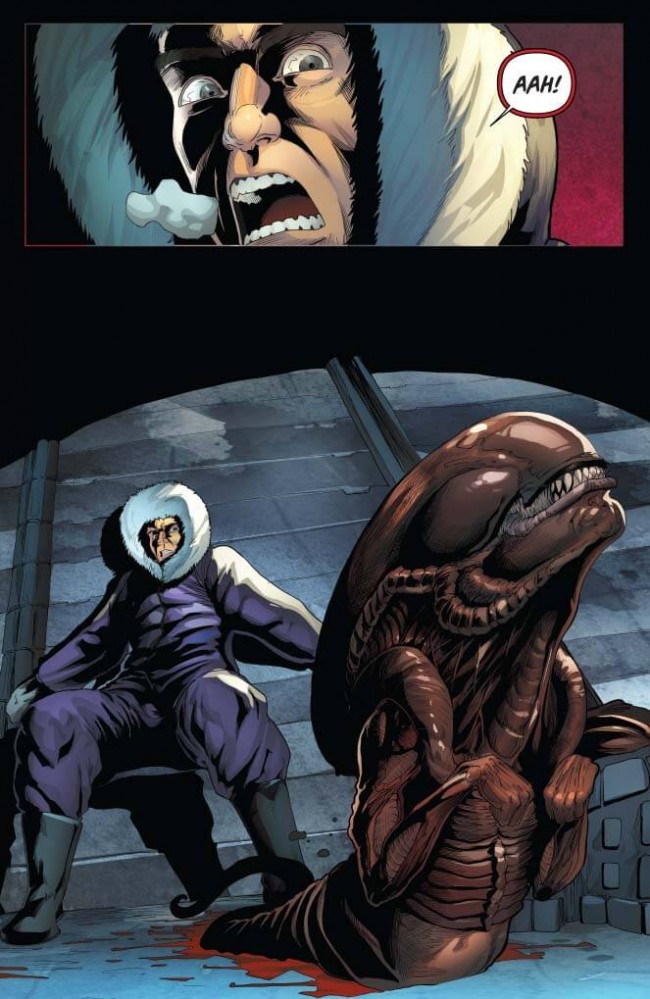 Bechko does do a good job of showing Vampirella’s empathy and her determination even in her weakened state. Not only does she delve into Vampirella’s character, but she expands on the threat of the Aliens and what they could possibly do once they reach the surface. It’s also an interesting look at how different people deal with traumatic experiences. Vampirella has taken it in stride and set her mind to defeating the Aliens while Lars is still in shock trying to make sense of what he just witnessed.

The best parts of Bechko’s story are the action and slasher sequences. The dialogue is short and to the point. Javier García-Miranda draws truly horrific scenes as Vampirella, the Aliens, and the second expeditionary team fight for survival. He uses a number of different camera angles to heighten the fear and terror. There are some great panels with an Alien creeping in the background just waiting to pounce.

There is also one page that is beautifully laid out showing the action in a step-by-step process. García-Miranda uses long horizontal panels to accentuate the narrow corridors Vampi and Lars find themselves running down. He does a great job of showing depth as well as the vastness of the ruin. I really enjoyed the way he draws the blood almost exploding from the Aliens’ victims as they tear them apart. It highlights the extreme violence the Aliens are inflicting.

Finally, Bechko leaves a huge teaser at the end of the story that brings the story back to the first issue and figuring out what the ruin they inhabit is. 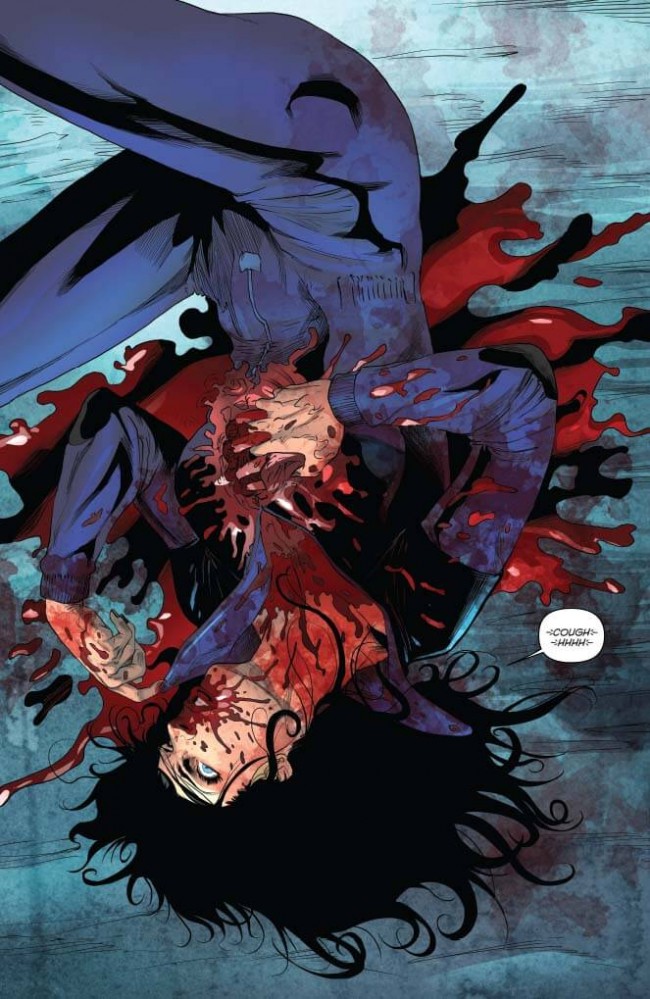 [easyazon_link identifier=”B0158NAFZS” locale=”US” tag=”bounintocomi-20″]Aliens / Vampirella #2[/easyazon_link] builds upon the horror and slasher themes from the first issue. It is exhilarating, thrilling, suspenseful, and above all frightening when the Aliens come calling. Bechko highlights the horror by lulling you into comfort with biting team humor and emotional bonding moments. Javier García-Miranda’s artwork does an excellent job of providing the shock and horror and displaying the sheer violence of the Aliens. If you are into slashers this is a book for you.