This review will contain some spoilers regarding what happened in the previous book and the beginning of this one.

When we last left the Turtles it was in a very tragic moment. Donatello was seemingly left dead at the hands of Beebop and Rocksteady. The current status quo sees Shredder defeated and gone, his daughter now in charge of the Foot Clan. But as it soon turns out Donatello’s spirit could be salvaged and put inside a robot’s body while his body slowly heals.

The death of Donatello was a very powerful and talked about moment. It’s a shame to see it cheapened almost directly after it occurred. While this book is full of action it lacks the kind of gravity and danger that would make the book really thrilling. Nothing important seems at stake here. As expected,one of the most interesting storylines is involves Casey Jones, and the fact he takes more beatings than the Turtles ever do in this book. In fact, the only moment they do get into a fight is during the FCBD special and its only purpose is exposition rather than having any stakes or consequences.

Thankfully, the Casey Jones moments save the book. His fight to save his neighborhood, protect it from a clan of bad guys while rejecting a violent and dangerous father figure is in many ways “Hero 101” after all. He’s the one with no animal power, no super strength, and nothing but a blunt weapon, but he always know when to do the right thing, in spite of dangers. And ultimately he inspire others to do so as well. He’s all I want in an action book. 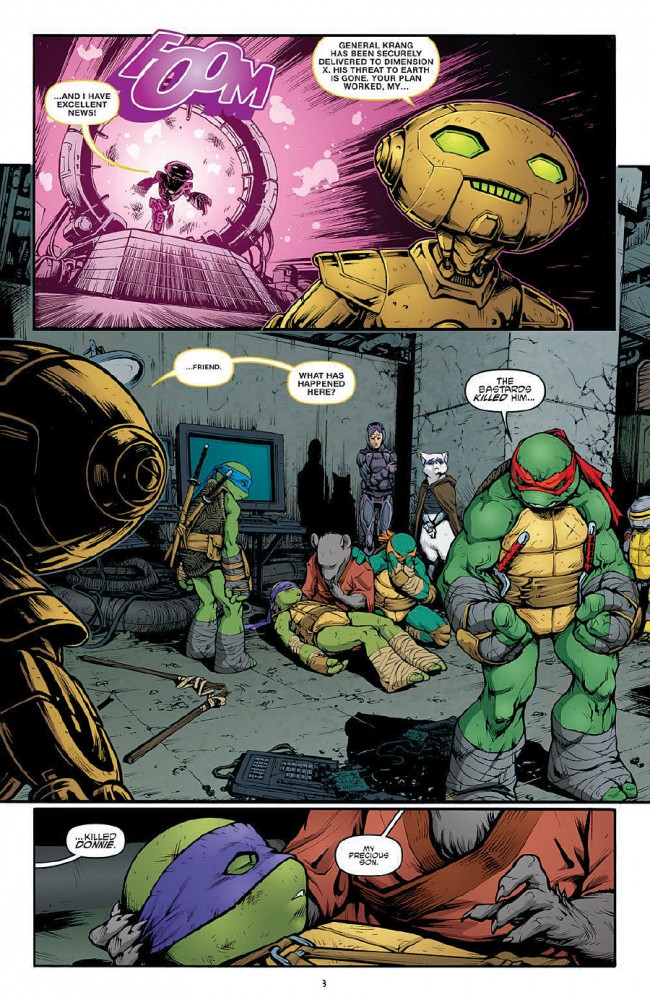 The fact that the FCBD special is here when it’s for the most part a recap of what happened recently in TMNT wouldn’t be such a problem, maybe it would even be welcome if it was in the beginning of the book and would let you catch up with recent events, but that would also have spoiled issues 45 and 46, so they’ve put it in the middle of the book. It totally breaks the flow of the story. And the fact is, the Foot Clan talks about doing things but don’t actually do anything, Shredder is crawling back to power but when he’s finally launching his big attack, that’s when the book ends. There’s so many things that are stuck in a transitional state throughout the book, it’s ultimately very frustrating.It seems to be setting up quite a number of interesting storylines for the next book though.

The art by Mateus Santolouco is fantastic. It’s sleek, vivid, and when he gets the chance todraw some action, he sure knows how to take full advantage of it. The first issue sees some art shifts with Charles Paul Wilson III doing flashback scenes (well, not really flashback, it’s complicated). And those art shifts can be a bit surprising as both styles are very much at odds with each other. Wilson III uses a pencil style without inks, and pastel color palettes. Santolouco uses very fine inks and vivid digital colors. Both styles are great on their own but leave a strange effect next to each other. But overall there is really no other complaint in terms of art, this book is very much a delight for the eyes. I should say I especially like how Santolouco draws the Turtles as they really feel “Teenage” and not adults or fully grown. 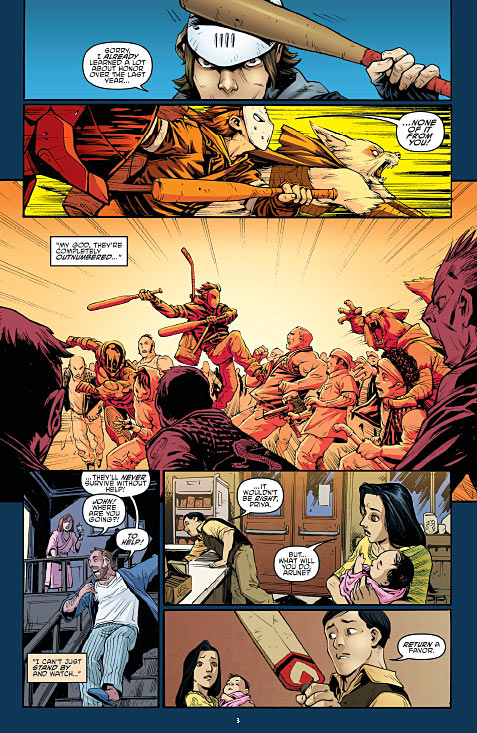 It’s disappointing to see a TPB with only three actual issues, the FCBD special being more of a recap of previous events. And that out of those issues you don’t see much action outside of Casey Jones. Still, [easyazon_link identifier=”1631404504″ locale=”US” tag=”bounintocomi-20″]this book[/easyazon_link] should probably be read in order to enjoy the next one, which will definitely see a lot more action. And the art was great throughout the book. So it’s good, but not great. You should purchase it for the Casey Jones story.