On an idyllic world in the distant future humans live at peace with a unique organism. These natives, known as Shan’tee are a race of “conceptual beings,” existing only as “incomprehensible shifts in quantum foam.” The Tenth doctor, having decided to give his newest companion a tour of this world, must now help it to overcome the calamity that inevitably appears in his wake. How does it fare?

If this set up sounds a lot like the first ten minutes of early Tenth Doctor episodes, know that it’s only because it’s leading into something much like an early Tenth Doctor two-parter. The first half of Titan’s latest issue of [easyazon_link identifier=”B015PY87BE” locale=”US” tag=”bounintocomi-20″]Doctor Who: The Tenth Doctor #2.1[/easyazon_link] begins with a giant pile of exposition about the time and place we now find ourselves in. The second half then moves right into explaining the problem The Doctor and his companion are going to have to solve.

It’s a trite and formulaic approach. It’s also very transparent, as immersion can be broken seeing the invisible boxes being “checked” next to each of the bullet points the comic needs to hit in order to feel like a second or third season episode. And while that can be a bit off-putting, it might actually feel refreshing to someone who doesn’t like the direction the show has been going for the last couple of years.

Getting into the nitty gritty of this world and it’s inhabitants would probably spoil the fun of this classic Whovian adventure. It suffices to say that it’s full of the kind of techno-babble with a fantastical bent that the series is known for. It works well in service of the story, but on it’s own it falls apart. 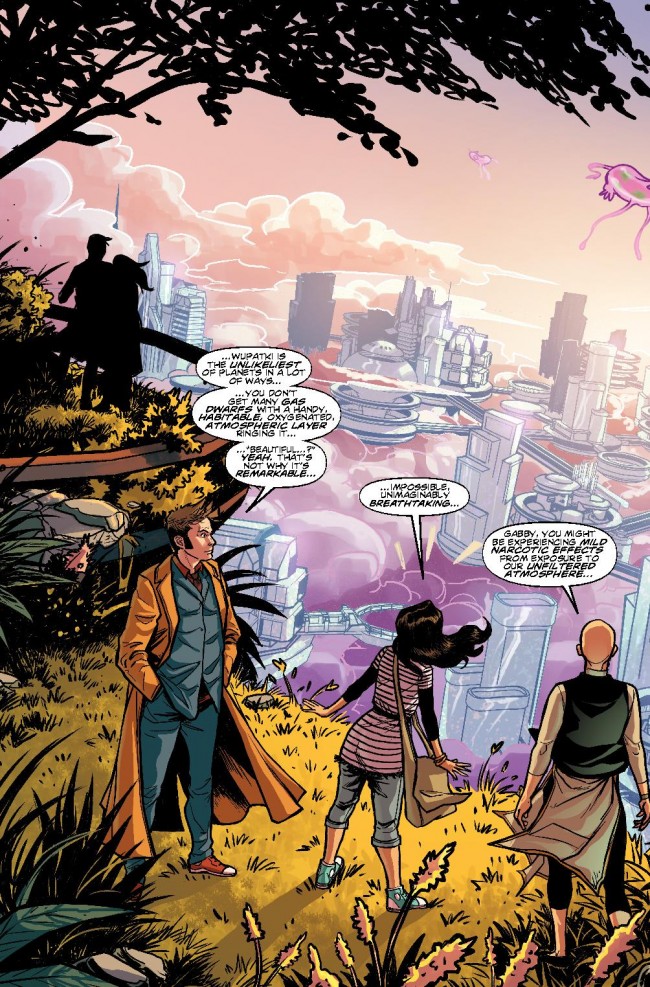 Luckily the story sweeps you right along, never giving you too much time to think about the exposition of plot developments before presenting you with the next one. It’s not that the cracks don’t show, but rather that you don’t get a chance to stare at them for want of something newer or more interesting.

However, a break-neck pace can’t really do much to alleviate the strange leaps in logic and convenient plot devices The Doctor uses in this issue to figure out exactly what’s going on. I know this sort of thing is a trope of the series, but writer Nick Abadzis seems to lean a little too much on it. I found it hard to ignore, but I imagine a lot of people are willing to forgive him for it. In the end, reading this issue makes you feel like we’re back with the Tenth Doctor, and that’s what really matters.

This issue is being marketed as a jumping off point. There isn’t really any baggage from previous issues being discussed here. This is despite that fact that The Doctor’s companion, Cindy, is a comic-only character. She’s serviceable as an analogue for the reader as we explore this world, but she doesn’t get much of an opportunity to display her personality. She’s the most forgettable thing about the comic. It’s a shame, too, because The Doctor’s companions have often been just as much of a driving force in shaping the tone of the stories as he is. 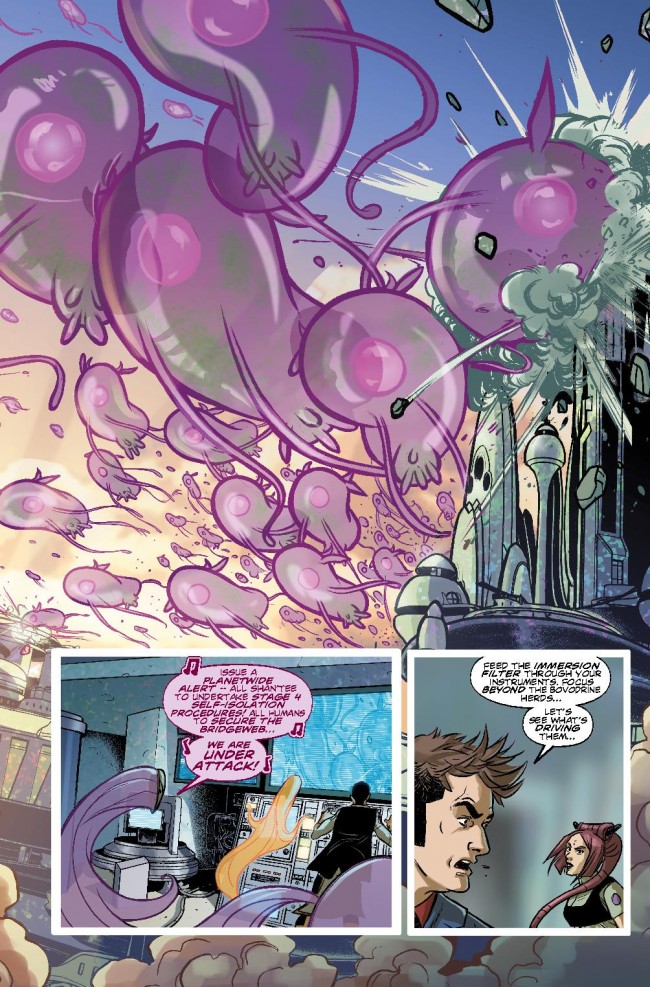 The artwork is largely forgettable as well, but that’s not because of anything artist Eleonora Carlini or colorist Claudia Sg Iannicello did wrong. Rather, it’s because they do such a great job of emulating the show. Sure, Doctor Who features an absurd budget and cutting edge effects these days, but it wasn’t so long ago that cheesy sets and b-movie props were the norm. The art tries to mimic those times as much as the story does. It succeeds fantastically at it! But by definition, that means it looks fake.

If you miss that good ol’ days of David Tenant’s Doctor this comic is for you. [easyazon_link identifier=”B015PY87BE” locale=”US” tag=”bounintocomi-20″]Doctor Who: The Tenth Doctor #2.1[/easyazon_link] is a great jumping-on point, feels like an old episode of the reboot, and hits the right notes. The story is formulaic and of somewhat lower quality than the show, but who cares? It’s classic Tenth Doctor stuff.