Charlotte de la Cruz is a bank teller with a big heart who, after a failed job interview and an illegal transfer of funds to a client’s bank account, finds herself in the middle of the war between the Assassins and the Templars. How does it fare?

Writers Anthony Del Col and Conor McCreery begin [easyazon_link identifier=”B015ODHCV2″ locale=”US” tag=”bounintocomi-20″]Assassin’s Creed #1[/easyazon_link] with a ton of action in the Great Basin Desert during the middle of the California Gold Rush. We are introduced to Charlotte as she commandeers a Conestoga wagon full of gold and picks off a sniper holed up in the hills overlooking the basin.

After this brief stint of excitement in the Old West, Del Col and McCreery reveal that Charlotte is not in an Animus, a device that allows you to access your ancestors’ memories, but is playing the Abstergo game, Helix, in the modern day. While in present day San Diego, they begin to really dive into her character and explore who she is.

She is a firebrand who really cares about the well-being of other people. However, her passion can get the better of her and she is rash to make decisions, plowing ahead without taking a step to think about her decisions. She also has a very jaded view of the world, believing the system is rigged against her even with companies she once believed were aligned with her ideals. She’s also unscrupulous, deciding to steal money from people she labels “slumlords” in order to assist an elderly woman whose child is sick.

After revealing who Charlotte is, Del Col and McCreery throw her headfirst into the world of Assassins and Templars. She finds herself in the middle of a conspiracy where an Assassin has gone deep undercover within Abstergo to draw out a top Templar agent. The group of Assassins who recruit her need her to use an Animus to confirm the location of a Piece of Eden, magical artifacts left on Earth. 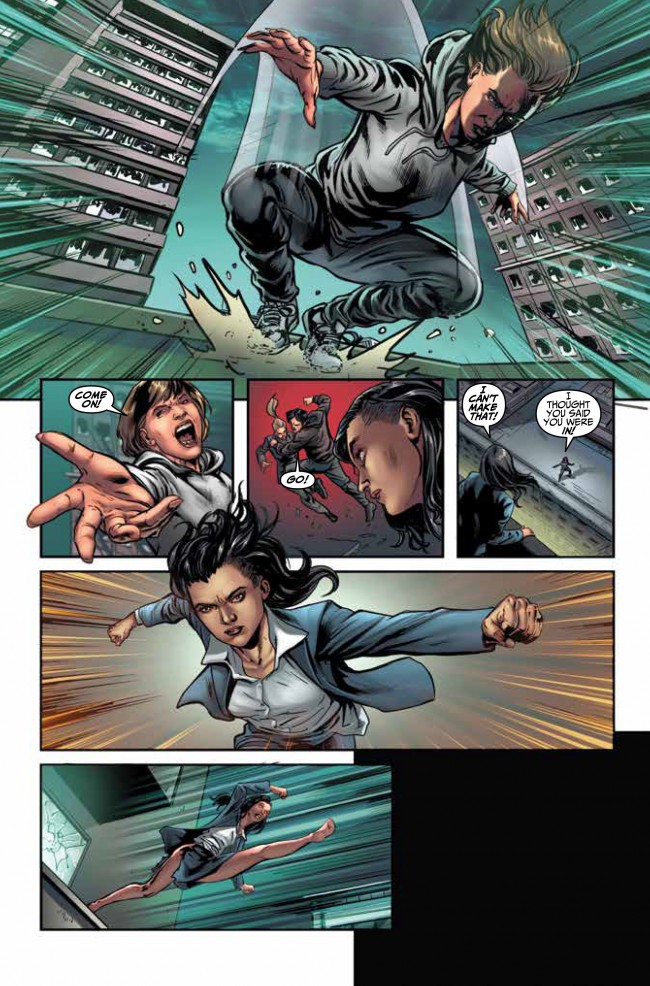 McCreery and Del Col are able to effectively convey to new readers, who may not be familiar with the video game, how this world works, explaining what the Animus is, who Abstergo is, and what the Assassins and Templars are fighting for. Not only do they do this, they also seem to setup an exploration of Charlotte’s belief system and how experiencing the past may grant her invaluable experience that will shape her outlook on life moving forward. It will be interesting to see if they continue to explore this theme moving forward.

Neil Edwards does a decent job with the artwork. The opening sequence is absolutely exhilarating with a very neat albeit unrealistic splash page depicting Charlotte flying through the air. Towards the end of the sequence it is a little difficult to figure out what is happening. It is unclear whether Charlotte or someone else shot someone in the canyon, although McCreery and Del Col do attempt to clear up the confusion through some dialogue.

Edwards depicts some really good facial emotions. There is one panel where he really captures the essence of determination on Charlotte’s face as she leaps across a rooftop. He also does a good job of conveying the Assassins’ financial situation. They are at an abandoned beach resort and does it ever look abandoned with debris strewn throughout the floor, but the highlight is one of the most ramshackle and beat up looking Animuses. 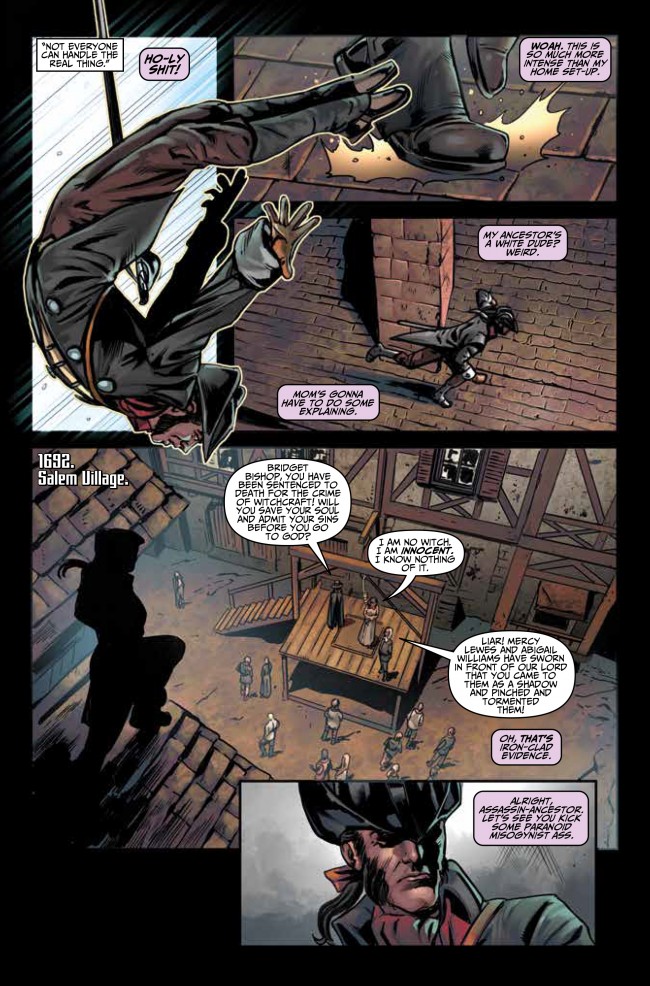 There are some issues. A bottle of wine Charlotte carries into her home changes distortions wildly from panel to panel. In one panel it is short and fat and in another it is tall and thin. There is also a panel where projectile vomit appears like a cloud of smoke rather than vomit.

[easyazon_link identifier=”B015ODHCV2″ locale=”US” tag=”bounintocomi-20″]Assassin’s Creed #1[/easyazon_link] does a good job of combining exposition, action, and character building. Anthony Del Col and Conor McCreery have created an interesting character and story that looks to explore and challenge what Charlotte believes. The artwork is pretty good overall with some minor slip-ups. It will be interesting to see how Edwards tackles colonial Salem moving forward as we only got a brief glimpse at the end of this issue.