The Shadow comes face-to-face with The Sandman as he continues to follow leads in order to secure justice for Bess Houdini. Will The Shadow be able to enact justice or will the secrets of the Last Illusion be unleashed on the world? How does it fare?

[easyazon_link identifier=”B016IRNZPA” locale=”US” tag=”bounintocomi-20″]The Shadow Vol. 2 #3[/easyazon_link] picks up right where the previous issue left us. The Shadow must confront The Sandman’s ravenous monkeys. Writer Cullen Bunn uses an internal monologue during the fight sequence which unveils The Shadow’s disposition towards the beasts. His feeling that he would “loathe” putting down ravenous animals that are attempting to kill him seems highly uncharacteristic of The Shadow. Bunn doubles down on this emotional Shadow, “What sort of monster could do such things to a living creature?” It feels hollow and empty for a character whose main mission is to enact justice and who resolves by the end of this issue to carry out this mission no matter who or what stands in his path.

After The Shadow’s encounter with the ravenous monkeys he comes face-to-face with The Sandman. The encounter seems to break from everything we learned about The Sandman in the previous issue. He no longer hopes to kill The Shadow, but instead use him for his own devious schemes. Bunn also directs the conversation to question The Shadow’s principles and ideals. It is unclear whether Bunn intends to further pursue this train of thought or he deliberately has The Shadow ignore much of The Sandman’s claims due to The Shadow’s rooted belief in justice. Either way Bunn brings it up and then leaves it alone, not really wrapping it up.

As the story progresses, the dialogue has its ups and downs. During a scene with Lamont Cranston and a university professor, the dialogue is rough. Bunn has the professor cut straight to the chase, offering his assistance in exchange for a large donation. However, he has Cranston use subterfuge in the conversation in an attempt to acquire information. It makes the conversation feel unnatural and fake. 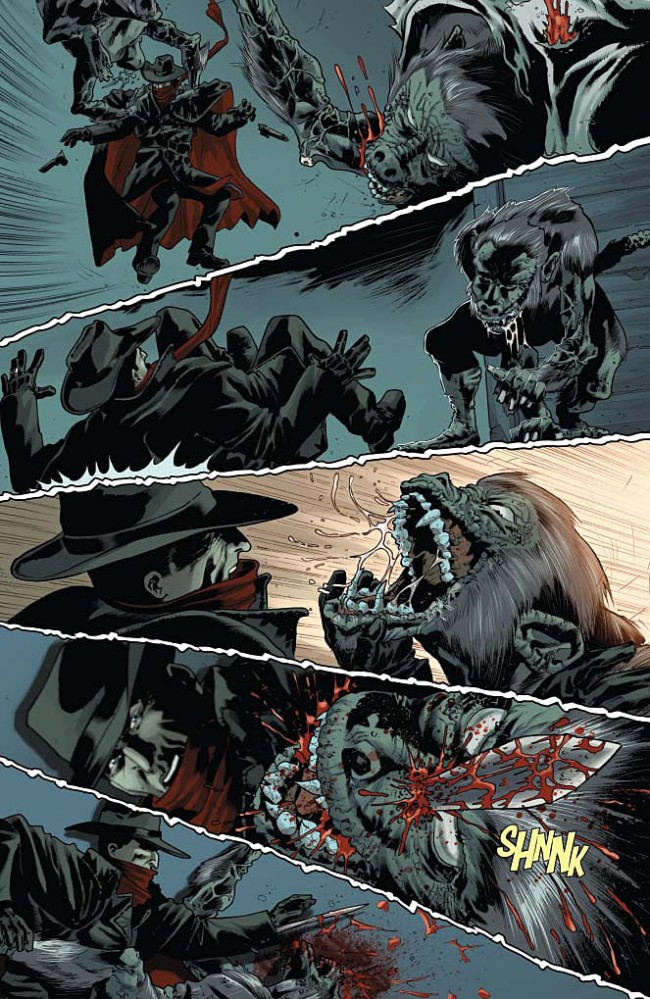 However, the dialogue vastly improves in the next sequence. It is crisp, full of subterfuge, and respect for each other. It feels natural and Bunn writes Nitocris as one who could be a potential rival to The Shadow. Of note, Bunn really widens the lens of the story with the introduction of Nitocris, detailing two separate factions fighting over the Last Illusion. The first attempts to keep it from the world and the second to harness its powers.

Giovanni Timpano’s artwork for the most part is very good. The opening sequence with the ravenous monkeys is very enjoyable with some classic images of The Shadow, his cape on full display as he unloads his .45s.

Timpano also depicts the degree of violence individuals are willingly to take as they fight over the Last Illusion. It is pretty horrific with appendages being hacked up. Timpano also takes care to add plenty of supporting objects in his drawings, whether it is a bookshelf, pillows, or valuable china. It makes the world seem lived in. 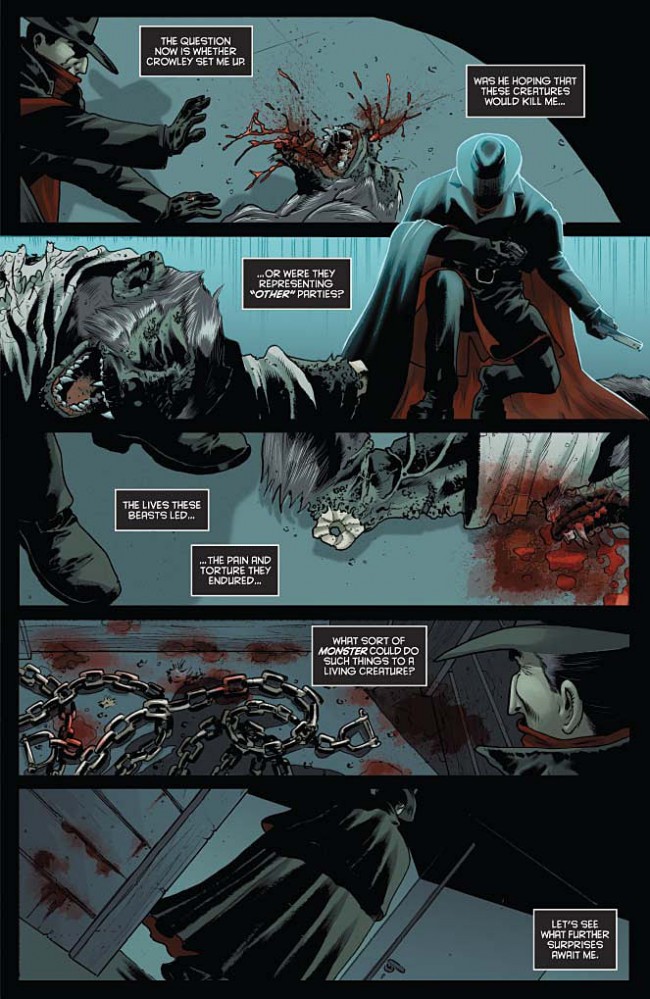 The final scene is absolutely brilliant and he captures Nitocris’ facial expressions perfectly and really highlights their change through his page design. He is able to capture how one’s recognition and awareness can happen within split seconds.

[easyazon_link identifier=”B016IRNZPA” locale=”US” tag=”bounintocomi-20″]The Shadow Vol. 2 #3[/easyazon_link] is a bit of a disappointment given the previous issue. Bunn uncharacteristically has The Shadow becoming overly emotional with regards to a pair of ravenous monkeys. He doesn’t wrap up the questioning of The Shadow’s beliefs and, in fact, ignores it for the rest of the issue. Finally, the conversation with the professor felt fake and completely unnatural. However, there were some standout points with the final sequence concerning Bunn’s dialogue and Timpano’s artwork. Timpano’s artwork overall is good with well-designed pages and attention to detail, making the world feel lived in.