Red Sonja and Conan’s army lay defeated. However, the two heroes continue to fight on, infiltrating Kal’Ang’s palace and fighting their way to the top encountering a number of enhanced creatures. Will they be able to stop Kal’Ang or will his Blood Root elixir prove too much for the likes of Red Sonja and Conan? How does it fare?

Victor Gischler and Roberto Castro continue to deliver an exciting and action packed series that even offers a nice surprise twist at the end in [easyazon_link identifier=”B016IRNZIM” locale=”US” tag=”bounintocomi-20″]Red Sonja / Conan #3[/easyazon_link]. Gischler scripts the book in an old school, dungeon crawling format with Red Sonja and Conan entering Kal’Ang’s palace and weaving their way through a number of different enhanced creatures and guards.

At one point during the ascent, Gischler examines Conan’s character as he accepts the surrender of a number of Kal’Ang’s still human guards. It shows a potentially more merciful Conan or, more likely, one who does not wish to waste his energy on lowly guards when their master is so close. Following this encounter, Conan’s character is brought to the forefront again as Red Sonja wonders whether or not they should continue to pursue Kal’Ang. Conan’s response shows his determination, but also the danger of the Blood Root.

While Conan and Red Sonja are busy working their way through the tower, Gischler examines Kal’Ang’s fears and toys with him through the use of The Seer’s riddles. It is quite entertaining to see the villain squirm under his own self-doubt and Gischler exposes Kal’Ang’s true self as a lowly mage who lacks any strategic brilliance or any skill beyond his herbology. He is out of his league when it comes to Conan and Red Sonja. 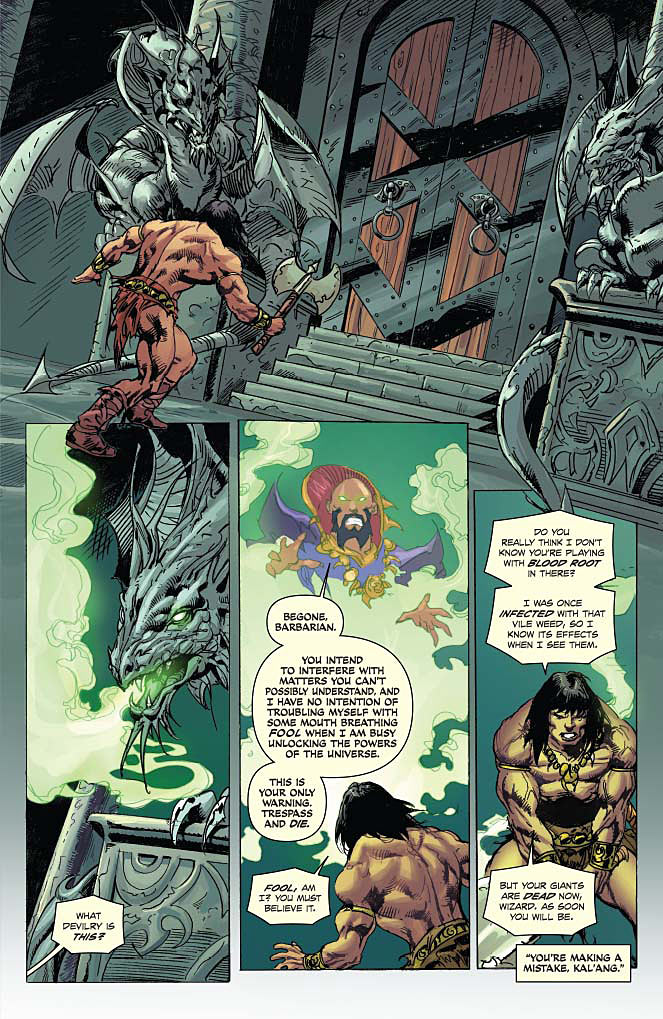 Roberto Castro has plenty of fun and is able to flex his creative muscles on a number of different ancient monsters including the Hydra. For example, he is able to put his own unique design on them such as putting rat heads on the Hydra. The action sequences are well laid out and have a good flow to them. One of the action sequences does an excellent job of not only conveying motion as Red Sonja and Conan find themselves in varied positions as they dodge and tumble in order to evade, but also attacking one of Kal’Ang’s enhanced creatures.

Towards the end, Castro also does a wonderful job with facial expressions, capturing not only fear, but a delight in evil power. It reminds me of the Emperor in Episode III as he kills Windu. It’s that kind of evil. There are some minor issues with the artwork such as blood spurting from a guard’s neck but none dripping from his decapitated head, but these are few and far between.

Alex Guimaraes’ colors provide a great high fantasy, dungeon crawling aesthetic with dark corridors and hallways lit with torches. He is also able to use the torchlight to showcase Kal’Ang’s rage using a dark orange in the background of certain panels. 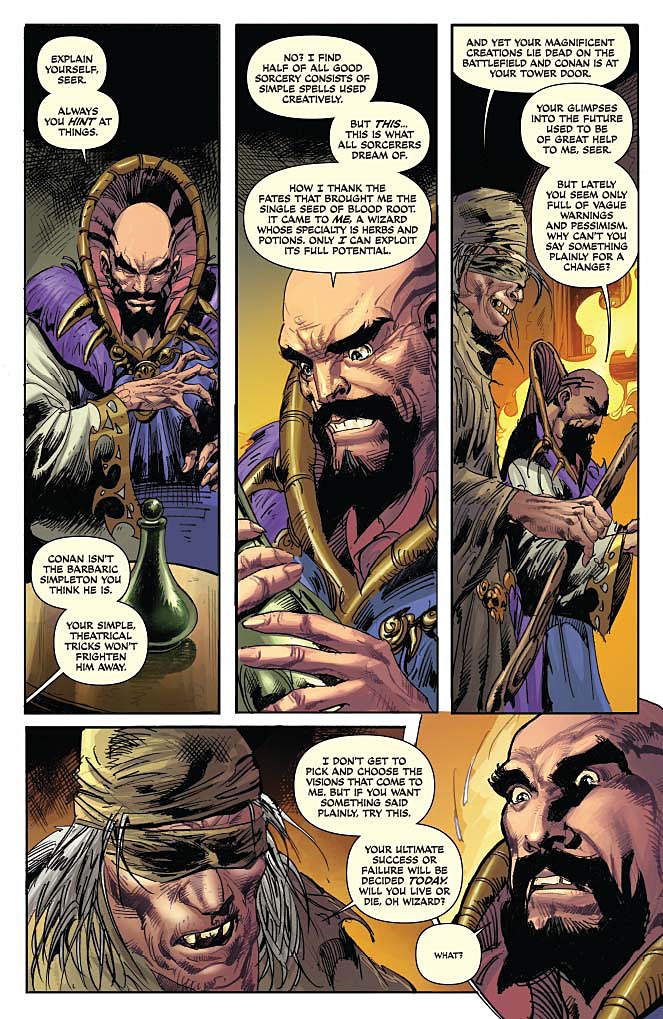 [easyazon_link identifier=”B016IRNZIM” locale=”US” tag=”bounintocomi-20″]Red Sonja / Conan #3[/easyazon_link] is a fast-paced, action adventure, dungeon crawling story that captures the essence and joy of high fantasy. The characterization of Kal’Ang is fantastic, topped only by the surprise ending. The action is well done with plenty of unique monsters and foes for Conan and Red Sonja to conquer. I definitely recommend this book for anyone who is looking for a good swords and sorcery adventure!