Abbey Chase continues to hunt down rare artifacts as she hopes to acquire enough money to begin her real goal: finding her Dad. However, her recent escapades are beginning to draw the wrong kind of attention. Will she be able to even start her search for her Dad? How does it fare?

Andy Hartnell begins [easyazon_link identifier=”B016251COE” locale=”US” tag=”bounintocomi-20″]Danger Girl: Renegade #2[/easyazon_link] in similar fashion to the first issue by taking us back into the past to meet another one of Abbey’s guardians. Much like the first issue, it provides plenty of excitement. Unfortunately, it is not Abbey on display but her guardian. It takes away from the mystique of Abbey and reveals her as the teenager she is.

This loss of mystique is quickly forgotten as Hartnell transitions back to the present where he introduces us to a saucy, even sassy Abbey Chase. The dialogue is fun and Hartnell reinforces how Abbey has changed from her time with David from the first issue. She is urged to run, but Abbey is not that young girl anymore.

Not only does Hartnell show Abbey’s sassy side and her willingness to fight, but he also examines what is driving her: the search for her Dad. He shows what she is willing to sacrifice and the lengths she is willing to go to find him. We also get a look into her new team, specifically Dallas, and how much he cares for Abbey and wants the best for her. 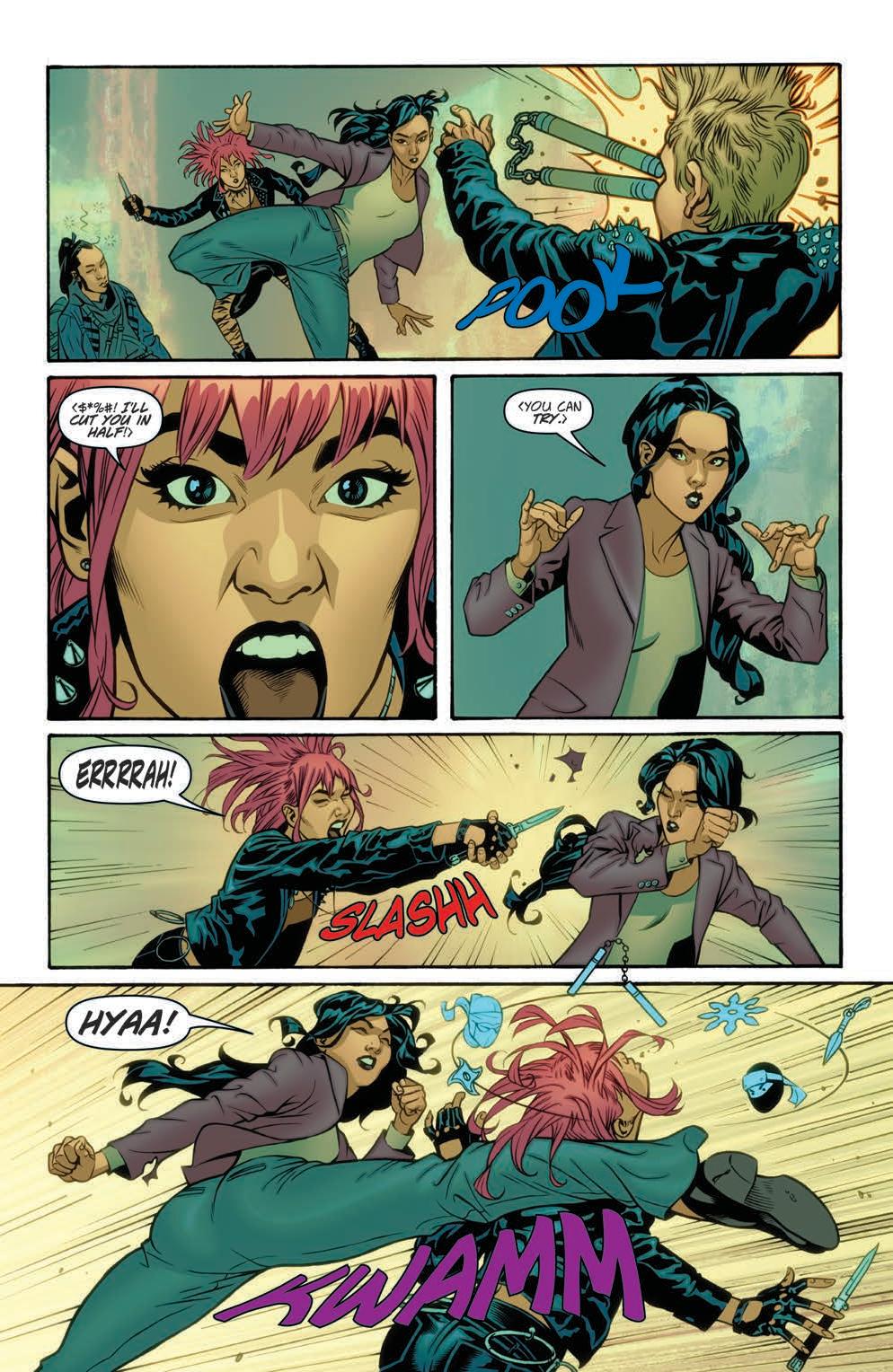 Probably the most interesting part of the story is Hartnell’s curve ball at the end which adds a whole new twist to the story and complicates Abbey’s adventures and the search for her Dad.

Stephen Molnar’s artwork can be incredibly awesome at some points while also a tad disappointing at others. During the first action sequence, he puts a nice twist on dizzy stars, choosing to use all kinds of ninja weapons and faces in place of the stars. It is a nice, unique touch.

However, Molnar struggles with profile shots of Abbey. Her eyes and mouth seem out of place and, rather than looking excited, she looks somewhat creepy. He also randomly has Abbey use a guitar in an action scene. The problem isn’t the actual art; it’s the choice of including the guitar because it doesn’t show up at all in the previous panels. It shows up out of nowhere.

The lack of details on computer screens is also disappointing. He just uses a bunch of blank boxes to denote activity. A little extra effort with some illegible lines of text or a faded-out photo could have added that extra touch. 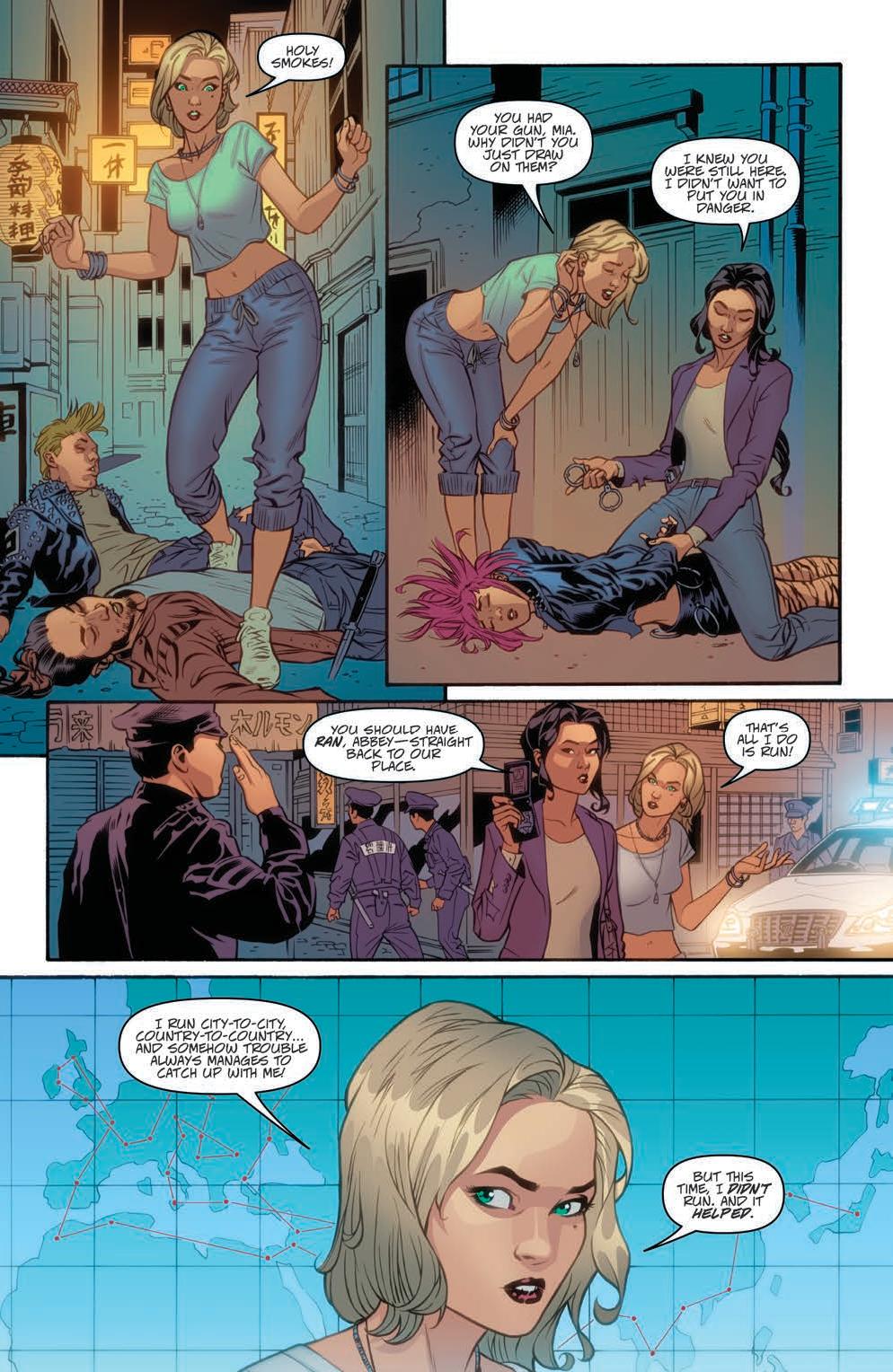 Colorist John Rauch attempts to add some flair to the computer screens by using different colors on the boxes and it is appreciated. He also does a good job of drawing your attention and highlighting certain aspects of Molnar’s art such as the sun reflecting off a knife blade. In addition, he does an excellent job of creating a divide between past and present by having the past take place at night using darker colors while the present day sequence takes place during the day utilizing a much brighter color palette.

[easyazon_link identifier=”B016251COE” locale=”US” tag=”bounintocomi-20″]Danger Girl: Renegade #2[/easyazon_link] is once again a fun adventure that gives us a different look at Abbey’s personality while also showing her overarching mission. In addition, it has a nice little twist at the end that opens up the story to go a number of different ways. Molnar’s artwork is outstanding in regards to depicting Abbey’s body language to sell her sassy attitude, but also struggles a bit with some profile shots and incorporates a random guitar in a fight sequence. Overall, this was an enjoyable book although it doesn’t provide the emotional response of the first issue.