Russ’ first mistake is making a huge assumption about Sam Wilson stating that he “grew up a black man in America, so if he has a particular political persuasion, you have to think it’s kind of been forced onto him through personal experience.” This is code for if you are black you have to be progressive. However, this is completely false. Neither the color of your skin, your gender, nor your sexuality dictate your politics despite what the Democrat agenda wants you to believe.

As for Sam Wilson, he was a respected community volunteer before he became consumed with his grief over the death of his parents and chose to be “Snap” Wilson, a professional criminal and gang member (although this has recently been retconned and turned into a fake memory). He then became Captain America’s partner, fighting with him in the Civil War storyline against The United States Government’s Superhuman Registration Act. I’m not really sure how his political persuasion is forced upon him other than the fact he is an obvious comic book character, but that is exactly what Nick Spencer did with the character. He gave him a specific political persuasion that he otherwise didn’t have.

After showing how comics have diverse stories that can be used to explore a number of different issues (which they should!), Russ dives into the actual story and characterization Nick Spencer creates in [easyazon_link identifier=”B015P661CE” locale=”US” tag=”bounintocomi-20″]Captain America: Sam Wilson #1[/easyazon_link]. To Russ’ credit he acknowledges his own political bias and understands how the depiction of the illegal immigrants comes off as “a little too glowing.” For the most part, these illegals actually seem to have it pretty easy with an honest coyote aiding them and even stashing water jugs for rehydration. There are plenty of real-life stories that portray the horror of the plight of illegals that are way more graphic than what is portrayed in the book.

Russ then transitions into attacking the Fox & Friends hosts for their reaction to the characterization of Supreme Serpent and his organization, the Sons of the Serpent. His main attack is on Clayton Morris’ ignorance of the Sons of the Serpent and the subtle et cetera, et cetera during the Supreme Serpent’s speech. However, as someone who has just started reading comics over the past year and this is my first Captain America book, it is easy to presume the Sons of the Serpent are Spencer’s depiction of U.S. conservatives. The et cetera, et cetera also didn’t seem subtle; it came off as Spencer not wanting to repeat himself. Although I will say the Supreme Serpent’s bit about the phone calls may be more of a subtle hint that he may not believe his own words, although it felt to me like a poor attempt at humor.

Russ attempts to deflect the terrible characterization of the Sons of the Serpent by referencing the group’s past in Marvel. However, in previous stories there were no direct descriptions attributed to what many conservatives believe, such as natural law (advocated by St. Thomas Aquinas) and the U.S. Constitution (a document millions of people have sworn to uphold). Russ also fails to provide the rest of Spencer’s characterization which involves noting that illegals are seeking employment and if they don’t find it, they apply for welfare paid with taxpayer dollars. Something that many conservatives and libertarians are opposed to.

The next point Russ makes is criticizing Morris for saying “These serpents are stopping people from coming across the border and Captain America is saying, ‘Uh-uh, that’s not going to happen on my watch; I’m Captain America.” Russ believes this is a contradiction because the Serpents are “illegally abducting other human beings, whether or not they are also doing something illegal.” However, this is exactly what people who enforce the law do. They arrest you and put you in jail to await trial or until you make bail. (I’m not a lawyer and I’m sure there are more steps involved.) It also isn’t unheard of for individual citizens to make…wait for it…a citizen’s arrest. That’s right! The way Spencer has crafted the story, the Sons of the Serpent aren’t actually killing or inflicting violence on the illegals, but rather only demanding they come with them, much like what a police officer does when arresting someone. And if they refuse they will use force. 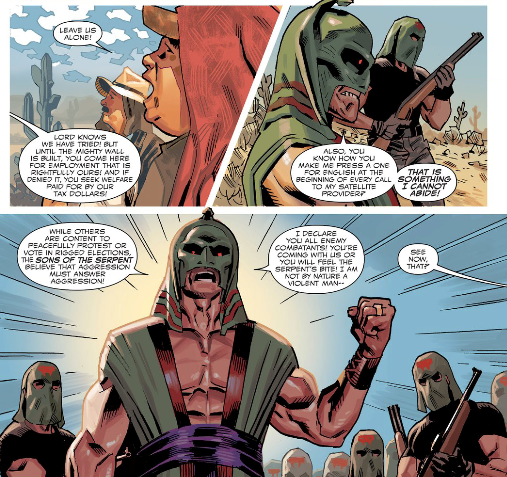 On a more philosophical note, believers in God’s law and natural law believe it trumps man-made law. The U.S. Constitution, while a man-made law, believes that God’s law and the rights people have are inherent and not granted by a government or an Earthly power. The text of the 9th Amendment confirms this idea: The enumeration in the Constitution, of certain rights, shall not be construed to deny or disparage others retained by the people.

Russ concludes the article by correcting Morris on his claim that comic books are struggling. The correction is well-deserved and really shows Morris’ lack of research into the subject on which he is reporting. He is definitely far from a comic book expert. Comic book unit sales have gone up from 69.26 million copies in 2000 to 82.65 million copies just last year. However, Morris does have some credence if he looked back to 1997 when 100.32 million copies were sold or even if he is comparing 2014 to 2013 where the industry took a close to 2 million unit hit from 84.51 million to 82.65 million. However, Morris doesn’t do this instead of citing a source that only shows a drop in sales based on comparing data between September in 2014 and 2015, which does not prove that comic book sales are struggling just they didn’t do as well as last September.

While Russ makes some much needed critiques of Fox & Friends regarding struggling comics sales, he fails to make a convincing argument on the denser topics and provides an extremely shallow defense of Spencer’s blatant characterization of the Sons of the Serpents as conservatives who are opposed to illegal immigration, support natural law, the Constitution, and don’t want to give welfare to illegals.

Spencer and Marvel can write and publish what they want, but this does not mean they are immune to criticism. Healthy criticism is good and there is plenty to criticize in Marvel and Spencer’s [easyazon_link identifier=”B015P661CE” locale=”US” tag=”bounintocomi-20″]Captain America: Sam Wilson #1[/easyazon_link].