Aric of Dacia has supposedly died and been buried in the same location as his grandfather, Alaric. However, the site has become a tourist attraction and drawn the ire of Commander Trill who aims to reclaim the legacy of Aric from “The False One.” What is the truth behind X-O Manowar’s death? How does it fare?

[easyazon_link identifier=”B015X5HTKK” locale=”US” tag=”bounintocomi-20″]Book of Death: The Fall of X-O Manowar #1[/easyazon_link] is the unveiling of a seemingly endless legacy for the Valiant universe. Robert Venditti crafts an intriguing story and perfectly sets up the huge reveal at the end that will take you by surprise.

In order to set up the reveal, Venditti does some leg work with the characterization of Commander Trill, showing us a different side to the Vine, but also keeping his core characterization intact. Where Venditti really puts in the work, is the introduction of a father and son who are visiting the museum. Venditti is able to tell the story of X-O Manowar’s death through the father explaining the legend of Aric of Dacia to his son as they walk around museum.

After the first third of the book focuses on the present, Venditti switches to the past and has Henry Clayton depict X-O Manowar’s death. He does this at the height of the climax, wanting you to forge ahead and figure out what is going to happen at the museum. However, the sequences leading up to Aric’s death are the heart of the story. Venditti looks at Aric’s three closest relationships and lays it all on the line in three separate and different, yet emotionally powerful scenes.

Venditti is also quite a master of the dialogue, leaving subtle hints about the surprise reveal that you will probably only recognize as tells after reading it a second time. 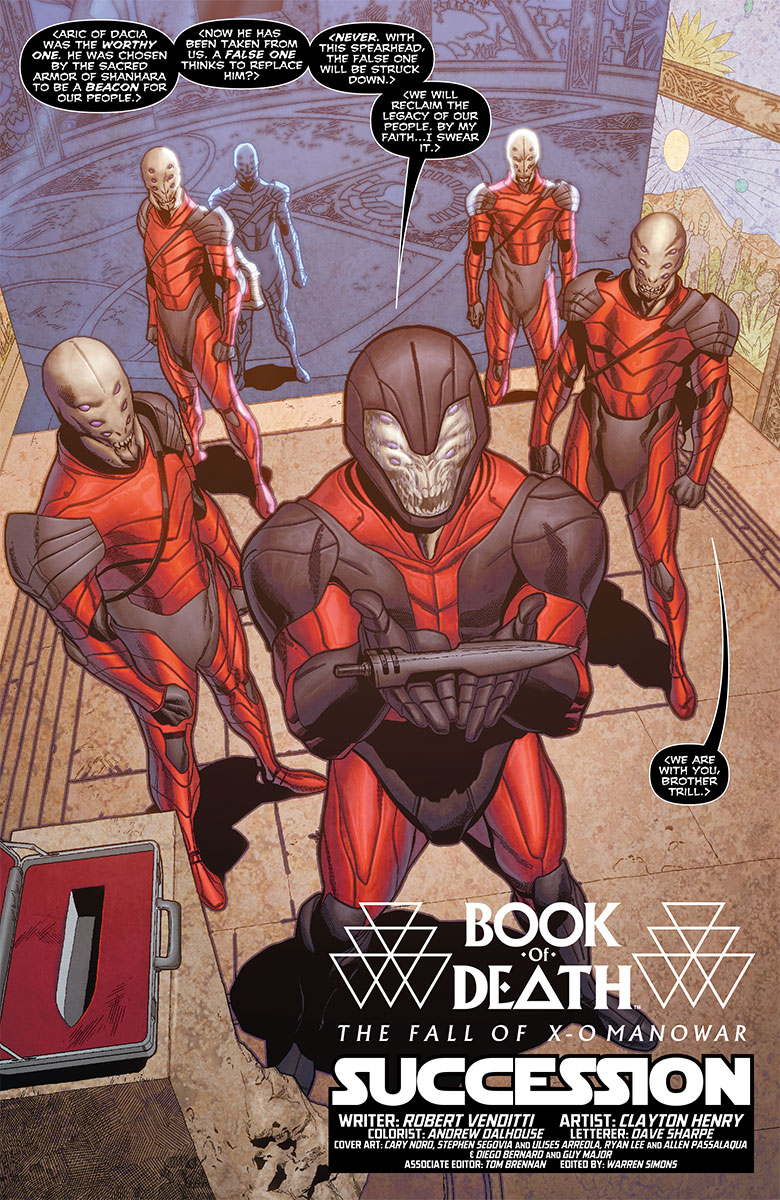 Clayton Henry’s artwork shines in the emotional scenes with Aric and his wife, daughter, and Shanhara. The body language and facial features show Aric’s weariness, but also the love he has for his wife and the pride in his daughter.

Henry also excels with some well-done action sequences that are able to capture motion effectively such as when Trill sends a coffin flying through the air. However, there are some issues. In one panel he has to cut off the lower torso completely because of its placement on top of Trill. The background also seems very sterile or desolate and the world doesn’t feel alive; rather, it feels barren. Henry includes other people in an attempt to populate the buildings, but the vast land in which he places them reduces their effect.

There are also some issues during combat scenes. One of those is when one of the characters loses their swords. They aren’t disarmed; rather, the swords are just gone in subsequent panels and then all of a sudden they reappear. 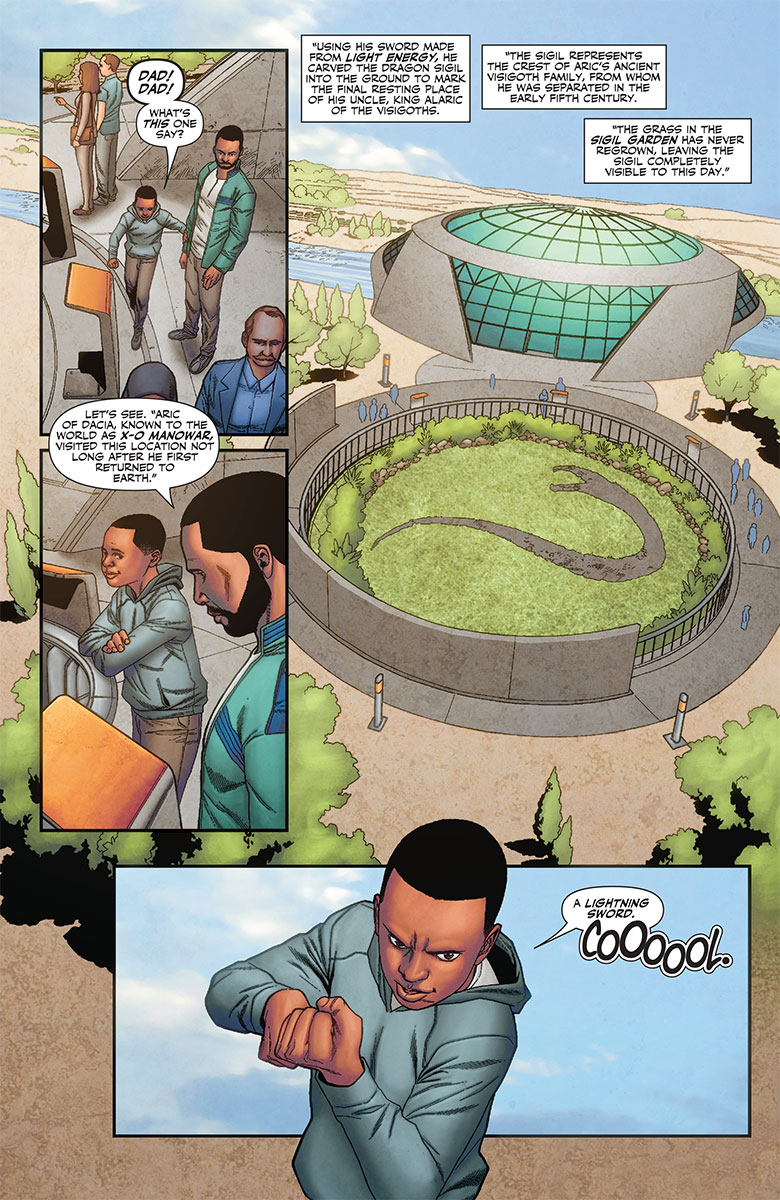 Andrew Dalhouse does a decent job with the coloring, but I think it his choice of using a lot of greys and whites that makes the world feel so lifeless. There are hardly any bright colors; when there is a green or a purple, it is muted and almost washed out.

[easyazon_link identifier=”B015X5HTKK” locale=”US” tag=”bounintocomi-20″]Book of Death: The Fall of X-O Manowar #1[/easyazon_link] is a wonderful, emotional tale detailing the legacy of Aric of Dacia with a nice surprise reveal. Clayton Henry does a fantastic job pulling your emotional strings with gripping facial expressions and body language. However, there are some issues with characters losing parts of their torsos and swords disappearing and reappearing. This book is a nice look into what the future holds for Aric of Dacia and a nice tie-in to Valiant’s series.