Charlotte has immersed herself into the Animus, following in the footsteps of her ancestor and Master Assassin Tom Stoddard who is an expert Piece of Eden tracker and is racing against the Templars to discover one in 17th century Salem, Massachusetts. That’s right during the witch hunts. How does it fare?

While the previous issue focused heavily on Charlotte in the modern day, this issue takes a completely different approach, focusing on Tom Stoddard as he hunts down a Piece of Eden in Salem, 1692. Writers Anthony Del Col and Conor McCreery do a good job of pacing out the book, following Tom on his quest to discover the Piece of Eden, doing everything you would expect a Master Assassin to do from acquiring aid from lesser assassins, stalking Templars, assassinating the opposition, and hunting down the Piece of Eden.

Not only is the book well-paced with plenty of action and intrigue, it also does a good job of characterizing Tom, his novice assassin informer, Jennifer Querry, and Templars Reverend Samuel Parris and Justice William Stoughton. They aren’t as well defined as Ezio or Rodrigo Borgia just yet, but the classic setup is there with plenty of potential ripples to make these memorable Assassins and Templars. They even added a pretty big twist to the Piece of Eden hunt which was a pleasant yet still mysterious surprise. (This may not be something new to the series as I have only played up to Assassin’s Creed IV.) 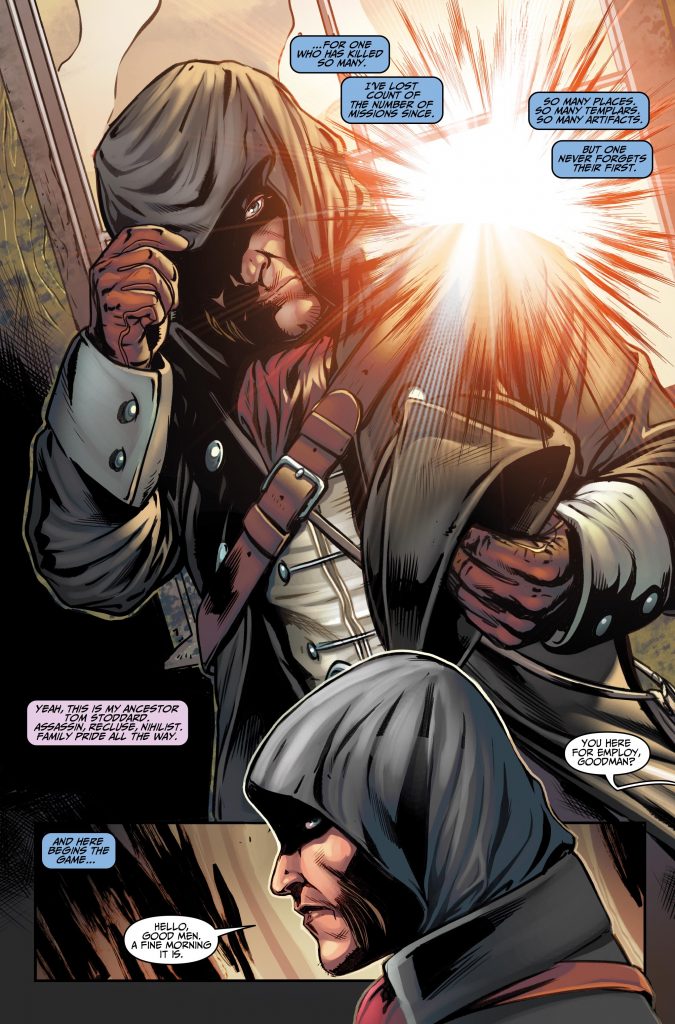 There was one flaw in the writing and that was the almost constant interjection of Charlotte into the dialogue. Not only was it distracting, it made her seem annoying, extremely judgmental, and completely naive. It also seemed like just a reminder that she was there in the Animus.

Neil Edwards’ artwork is serviceable. Due to certain camera angles he uses, characters’ proportions look off, especially one panel during a fight sequence when a Templar guard kicks Tom in the face. The guard’s leg looks abnormally short. There is also a panel where the Reverend’s chin bleeds into his neck. The characters’ facial expressions could also use some work to match the writing. At points some characters look obscenely angry, but the dialogue is only describing Tom.

Nevertheless, there are some really cool points such as the use of two page-length vertical panels depicting Tom’s descent. Edwards also adds some nice touches to 17th century architecture. He really shines in the initial action sequence where Tom uses a number of Assassin tricks and tools to overwhelm his opponents. It is extremely brutal and there is even a nod to Brotherhood with the entrance of fellow Assassin Jennifer Querry. 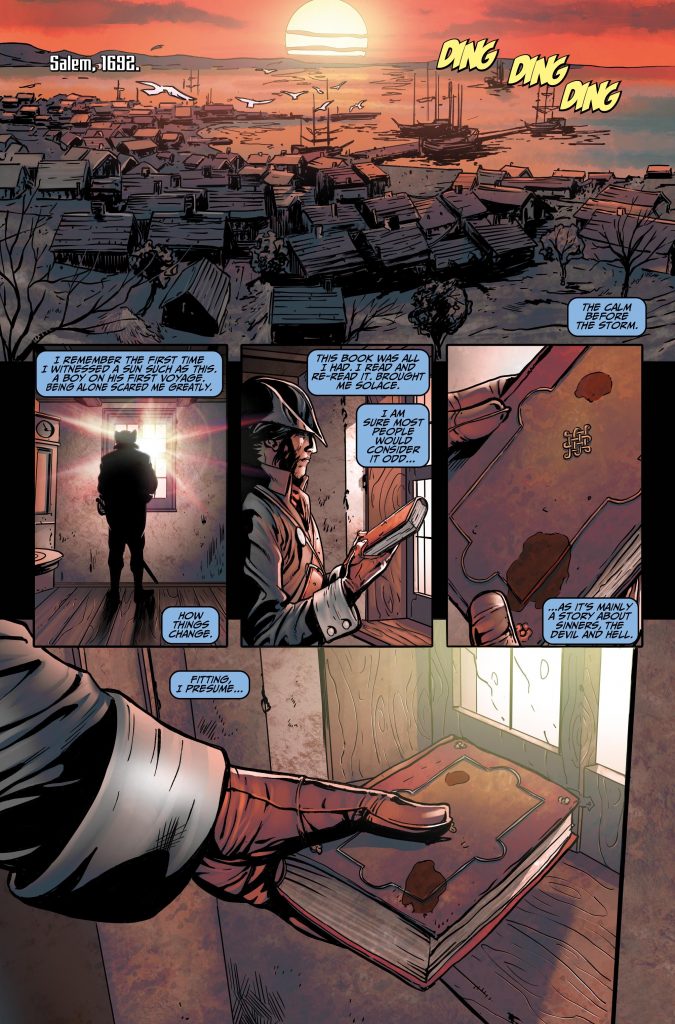 [easyazon_link identifier=”B0168WB49E” locale=”US” tag=”bounintocomi-20″]Assassin’s Creed #2[/easyazon_link] is a bloody adventure following one of the more interesting Assassins the series has given us. McCreery and Del Col do a great job of characterizing him, but also making him emotionally vulnerable towards the end of the issue. Neil Edwards’ artwork is serviceable with a number of mistakes, but also some bright spots. If you are into the story behind the Assassin’s Creed games this is an issue you don’t want to miss.