Quentin Tarantino is one of the greatest writers and directors in Hollywood history. Whether you like his films or not, you cannot deny the impact he has made to the world of film. Whether it be visually, with the soundtrack, or his beautiful scripts, a Tarantino movie is an experience you cannot miss.

That doesn’t mean everything he’s touched has turned to gold. I wasn’t the biggest fan of Django Unchained. I didn’t hate it but thought it was a rather weak effort. When I heard that he partnered with Dynamite Comics in order to have Django partner with Zorro in an adventure, the pairing intrigued me enough to see what the two could do together.

The story starts with Don Diego De La Vega coming across Django on a trip he is taking. From the start, the story starts off on a bad foot. I had a big problem with the randomness of their meeting. Zorro is off to stop a guy who is calling himself the Archduke of Arizona. From the outset, he makes it clear he has a plan to deal with this guy and out of nowhere, based on one gunfight at the beginning of the story, he decides it is a good idea to bring along a complete stranger in on his plan. It would have made more sense if it had been revealed in the story that Django had a reputation by this point and Zorro went out of his way to make sure their paths crossed. Then you could understand why he ended up picking him up like he did. The randomness of their meeting just comes off as too convenient for my tastes. 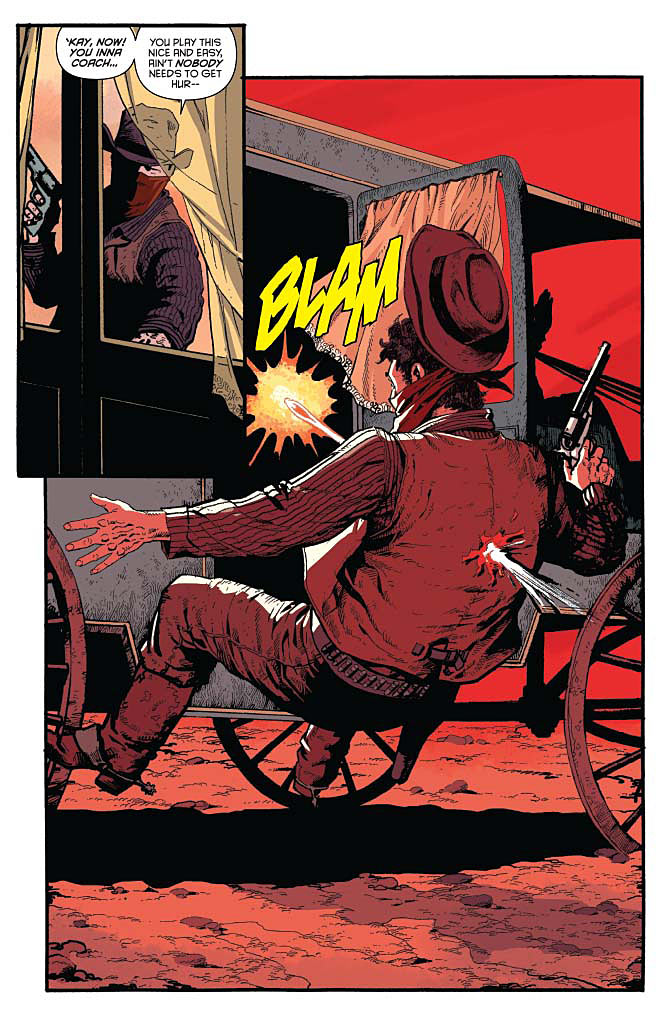 The villain in the story is someone you’re actively rooting against but his diabolical scheme ends up not making much sense at all. The plan takes years to execute. It takes him around the world in order to create a ruse believable enough that people would believe his wife is Spanish royalty. He does this all in order to perform one action. He wants to fleece the American government for money. Which begs the question, why would anyone smart enough to create such an elaborate plan end up screwing things up so badly by simply treating others that he felt were below him so horribly? The only reason Zorro apparently caught wind of the guy was the fact that he heard this gentleman was oppressing the locals. While you could argue that mad men don’t always think logically, you have again evidence that while this guy was ruthless in pursuit of his goal, he wouldn’t leave anything to chance, not the smallest detail which makes the little mistakes he makes so incomprehensible.

The artwork was pretty solid. I think the goal was to replicate the feel of an old movie. It did come across like an old grindhouse film which, considering the source, is understandable. I really enjoyed the use of solid colors throughout to emphasize a certain mood. 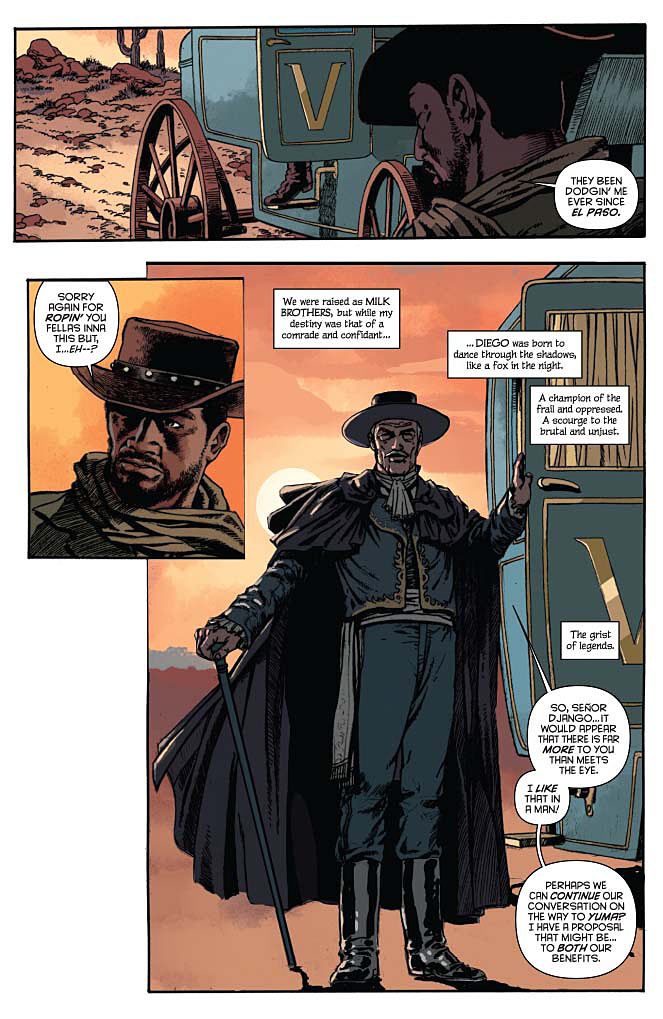 There was a scene a little over halfway through the story that involved the Archduke of Arizona killing Zorro’s driver, servant, man Friday, what have you. The panel showing the murder was a simple shot of the Archduke aiming a gun. The Archduke is drawn in black while everything else is in red. It does a lot to bring out the tension and anger that is felt by the Archduke. Really well done.

With this trade paperback, I also liked the extras which include covers for all the issues in the series as well as a feature that I liked which was the script for the first issue in the series. As a writer, I’ve seen various types of scripts but had not had much exposure to scripts for comic books. As a matter of fact, the first movie script I ever read was the script for Pulp Fiction which makes this kind of a full circle deal. It gives folks like myself who have wondered how a comic goes from script to page how the process starts. This alone makes this trade paperback a must buy for all aspiring comic book writers and artists. Not that this is the greatest comic book in human history but it gives you a chance to see the process from start to finish.

Overall this is not a bad series. While it doesn’t meet the expectations that Matt Wagner and Quentin Tarantino set from their original material, Quentin with Django Unchained and Matt with the Zorro stand-alone comic, it is a solid story from start to finish. There are some moments that will make you shake your head, but at the end of the day, when Django and Zorro save the day, you will find yourself happy at the resolution. If you get a chance to [easyazon_link identifier=”160690759X” locale=”US” tag=”bounintocomi-20″]purchase this trade paperback[/easyazon_link], it will be well worth your money.