Nick Roche and the Wreckers have returned after five years to find an unstable peace between the Autobots and the Decepticons. Unfortunately, that peace is at risk when human, Verity Carlo, threatens to release the Aequitas Files. Will the Wreckers be able to make things better? How does it fare?

[easyazon_link identifier=”B017V5U1MI” locale=”US” tag=”bounintocomi-20″]Transformers: Sins of the Wreckers #1[/easyazon_link] continues the story from Last Stand of the Wreckers which completed its run over five years ago. This can make Sins quite difficult to jump into. There are a number of plot and character threads that new readers, such as me, will not be able to fully grasp until the end of the issue and even then not everything fully clicks.

There are a ton of characters introduced or re-introduced. By the end of the issue, I think I was able to figure out who was who, but throughout most of the issue I was scratching my head or flipping back to previous pages to determine which Wrecker was which. I’m not sure if this is really an issue specific to this comic or to Transformers comics in general. The sheer numbers of the cast can be overwhelming, especially if you are not used to what they look like. I think a lot of the confusion comes from the lettering where there are a number of word bubbles that mention certain Wreckers, but don’t have tails so you aren’t sure which one is talking and to whom they are talking. Needless to say, it can be quite confusing.

Adding to this is the different color palettes used by Josh Burcham. In the beginning of the story he uses distinctive colors for Kup and Arcee, making them pretty distinguishable from each other. However, as the story progresses those distinctive colors fade and are gray-washed. Arcee is no longer pink and Kup’s light blue is gone in favor of grey. 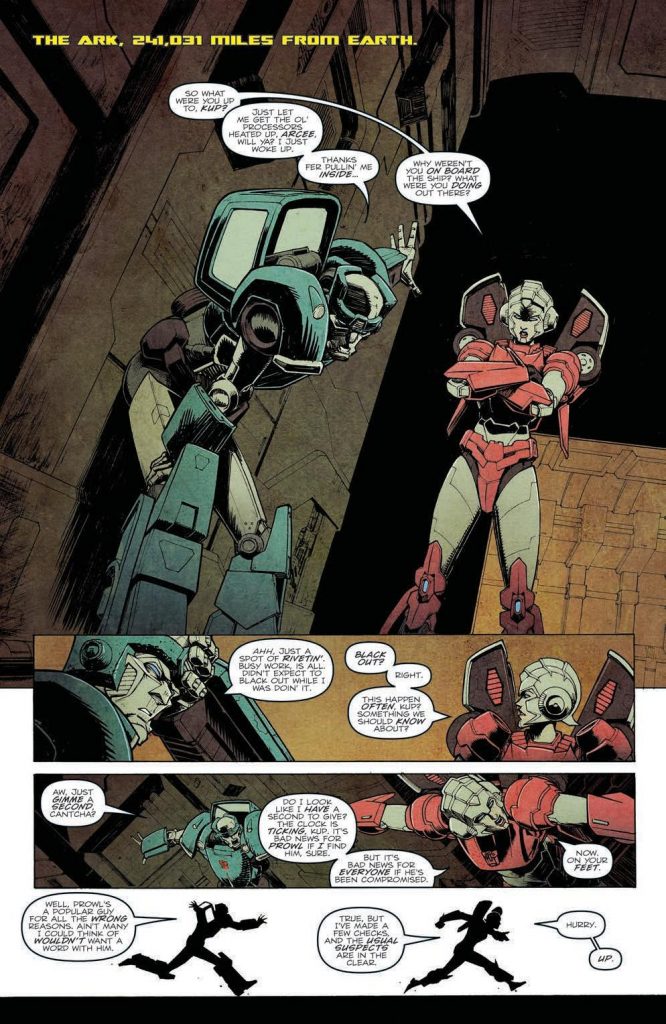 Aside from the confusion about which Transformer is which, there is also one very strange plot sequence that occurs. One of the main Wreckers, who was being kept in isolation, all of a sudden breaks free and becomes their leader. It doesn’t really make any sense and takes away a major story thread writer and artist Nick Roche had been building up: the cost and addiction to war the Wreckers face.

That being said, there is plenty of drama taking place in this story. Roche incorporates the disappearance of a super spy Wrecker into a manhunt and weaves it perfectly with the possibility of a major information leak that could reignite the war between the Autobots and the Decepticons. It isn’t even that straight forward. There are layers within the manhunt that complicate the story.

Roche’s artwork is pretty amazing. We only get to see one real transformation, but it was a simple yet unique take with the Transformer standing above his transformed self. Josh Burcham really makes this image work using a lighter shade of blue to depict the untransformed Transformer compared to the darker blue transformed form. 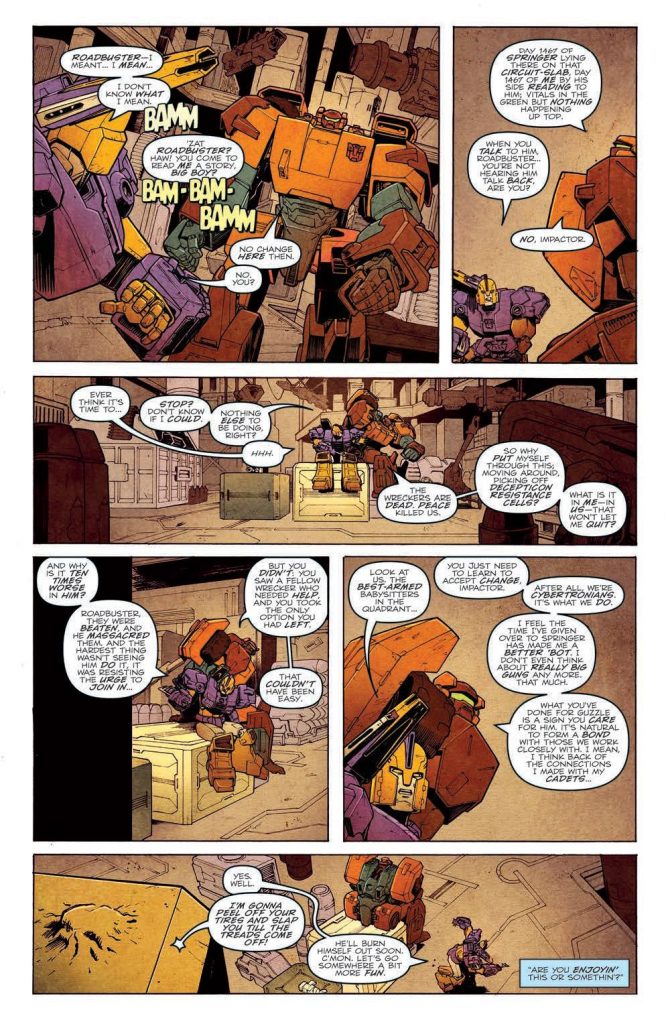 The action sequences in general are well done and Roche does a good job of using inset panels to push the action along while also separating what is happening between the two characters. For instance, he shows a large half page panel of Arcee attacking Verity Carlo. Within this large panel are three inset panels depicting the outcome of the attack on Verity.

[easyazon_link identifier=”B017V5U1MI” locale=”US” tag=”bounintocomi-20″]Transformers: Sins of the Wreckers #1[/easyazon_link] is a rough jumping-on point. It can be a little difficult to figure out all of the different characters and the overall plot. Despite this, Nick Roche creates a layered story with missing spies, a manhunt, and political intrigue all set in the Transformers universe. His artwork is also top notch with exciting action sequences and awesome weapon designs. However, Josh Burcham’s colors can make it difficult to differentiate certain Transformers, but at the same time does a great job depicting a Transformer transform.