If you’ve read the Grindhouse series, you know Alex de Campi can write some frightful, tense, and cruel stories with a vast variety of characters. With [easyazon_link identifier=”1632154439″ locale=”US” tag=”bounintocomi-20″]No Mercy, Vol. 1[/easyazon_link], helped by Carla Speed McNeil and Jenn Manley Lee, de Campi gets the opportunity to tell another story, no less cruel, but in a longer form. How does it fare?

The context in which the story takes place is fairly simple. A bunch of students freshly accepted to Princeton University are on a pre-college service trip to Central America to build schools. They get on a bus and a few problems arise quickly. The problems are bad; the area in which the students get stuck are even worse. Suddenly, what was supposed to be a fun journey becomes a fight for survival.

I should say that I’ve read a bunch of comics that had horror or survival components to them in the last few years, but what makes this book stand out and shine is the cast of teenagers that seem both realistic and interesting enough that I want to follow them. No Mercy does a great job of making me care for it’s wide range of diverse characters.

Of course, when you have a big cast it’s almost unavoidable to have some characters fit some stereotypes, which is not bad as long as those stereotypes are not the end game for them, only the basis upon which they get to evolve. The teenagers featured in the book all have different interests and aspirations, but what is really interesting is how they react when placed in a dramatic survivalist environment. Much like The Walking Dead, the horror is not the end game; it’s only the canvas for a much more interesting psychological study. 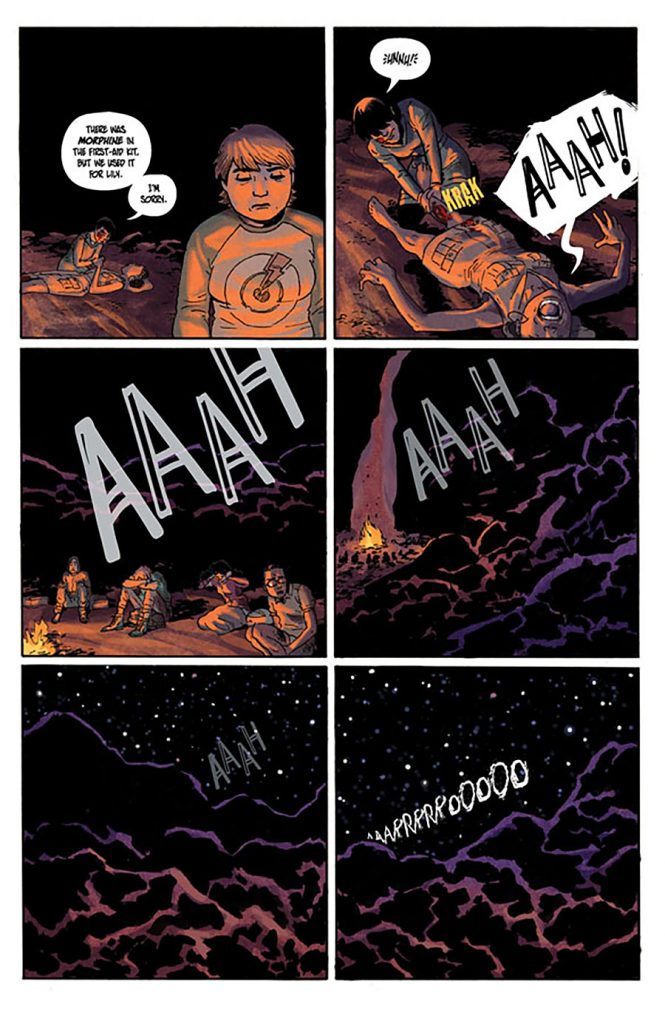 Still, de Campi knows how to keep a few surprises up her sleeve and throw you a curve ball when you’re not expecting it. The first trade only covers the first four comics (the fifth one is coming out December 9), but there’s still a lot happening there, enough to keep you turning the pages quite eagerly. And, as the title should let you know, there is no mercy given regarding the fate of the teenagers.

Carla Speed McNeil and Jenn Manley Lee are on art duties, respectively drawing and coloring the comic. I’ve been following McNeil’s art for a long time and she does not disappoint here; every character is distinctive enough to be recognized instantly (always a plus), and she is equally good at drawing action scenes and slower paced moments. The colors bring a lot of depth to the art. It feels audacious as it doesn’t shy away from bringing a lot of shiny colors to a pretty dark story. Actually, maybe that’s what is striking about the art. You would not expect this team of artists for a horror comic; yet it works really well.

It should be noted that while you only have four issues of story, you also get a very good amount of bonus and behind-the-scenes material. It’s always fun to stick your nose in a book’s creative process, at least for me. 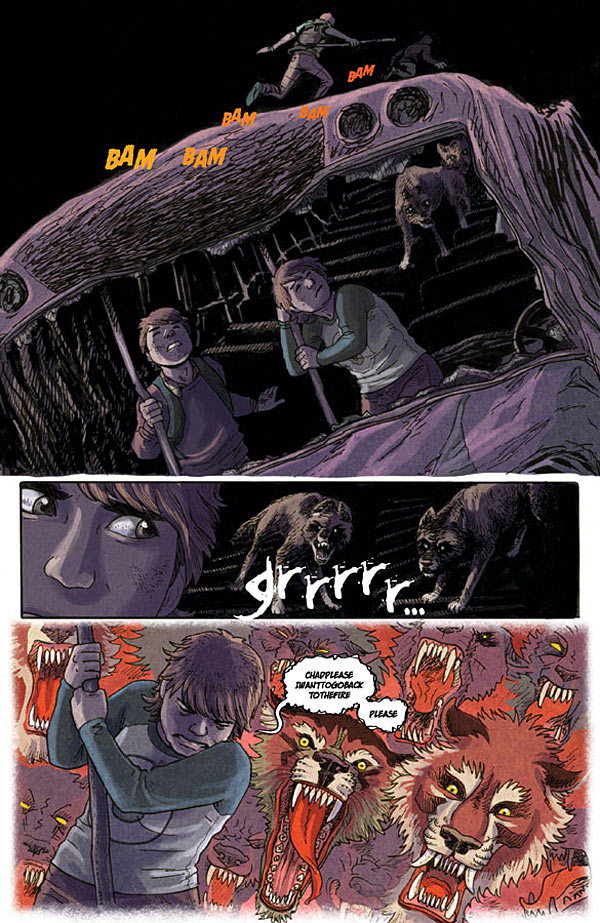 With a tense story, a well written and interesting cast, and enough action to keep you interested, this first trade already delivers everything you should expect from it. The excellent art only makes it stand out more and in my opinion [easyazon_link identifier=”1632154439″ locale=”US” tag=”bounintocomi-20″]No Mercy, Vol. 1[/easyazon_link] is a book you do not want to miss, and you should grab it before issue five comes out on December 9.