For as long as I can remember I have been a pro wrestling fan. I grew up in the 80’s so my big hero was Hulk Hogan. It started before Wrestlemania 3. The buildup to that show involved Andre the Giant betraying Hulk Hogan when Andre decided to team with evil manager Bobby the Brain Hennan. In what would go down in wrestling history, Hogan and Andre met in front of 93,000 plus fans in my home state of Michigan. It was one of the greatest matches in professional wrestling history. After taking a significant beating, Hogan took the upper hand and knocked the big man off his feet. From there, he hulked up, getting energy from the crowd as he picked Andre up for what would be called the slam heard round the world. 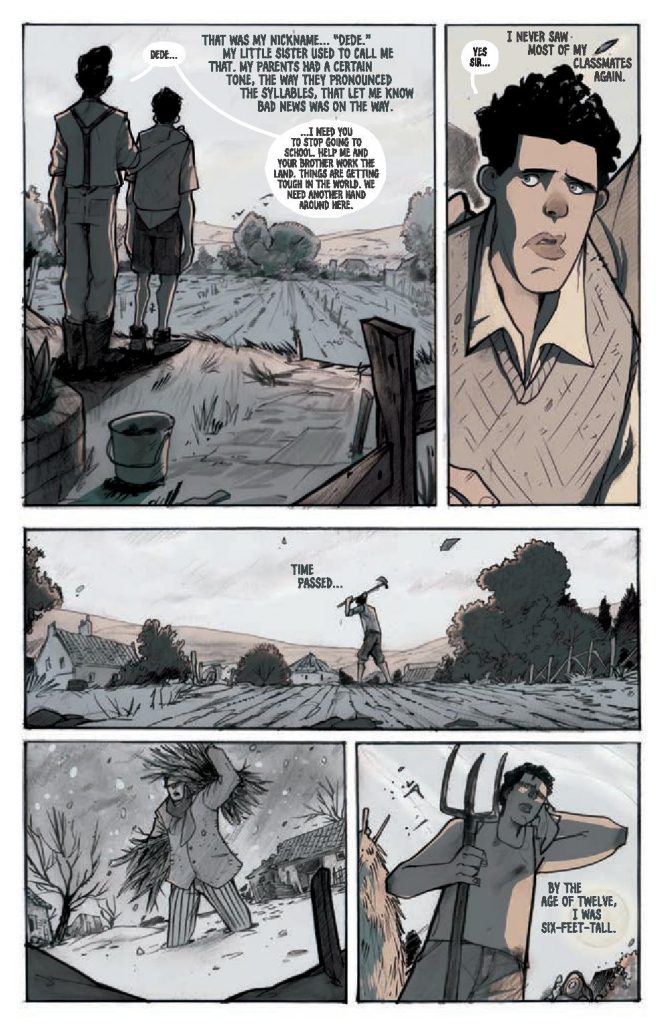 I had the honor of reading Andre the Giant: Closer to Heaven recently which is a graphic novel, told in the voice of Andre, detailing his life. I love how it starts out showing you the physical limitations he was going through near the end of his life. He had a disease called acromegaly, which forces the body to produce more growth hormone than it should have. You see how the disease was at first something that caused him undue grief but eventually became something he was able to reconcile.

Before the book starts off, we have an introduction from Andre’s daughter which adds its own unique wrinkle. You learn that for the longest time Andre thought there was no medical way he could be a father so he fought against it for a while. His daughter though clearly loves him despite his faults and I feel she must have had a hand in detailing some of the accounts in the story. With that involvement you would think the tendency would be to kind of whitewash the story, thankfully that doesn’t happen.

One of the stories recounts what happened in Japan when Andre was on a bus with the other wrestlers. They were being men in 1980 when Andre said something just plain wrong. He said something racial. Another passenger on that bus was the wrestler Bad News Allen. He demanded the bus driver pull over and called Andre out to fight. Andre goofed it off but didn’t leave the bus. Later Bad News confronted Andre and told him off, saying he didn’t expect that from him. He told Andre that he didn’t want to hear any more of the that nonsense. Andre ended up apologizing. Stories like this, and there are a number of them in this story, humanize the Giant. 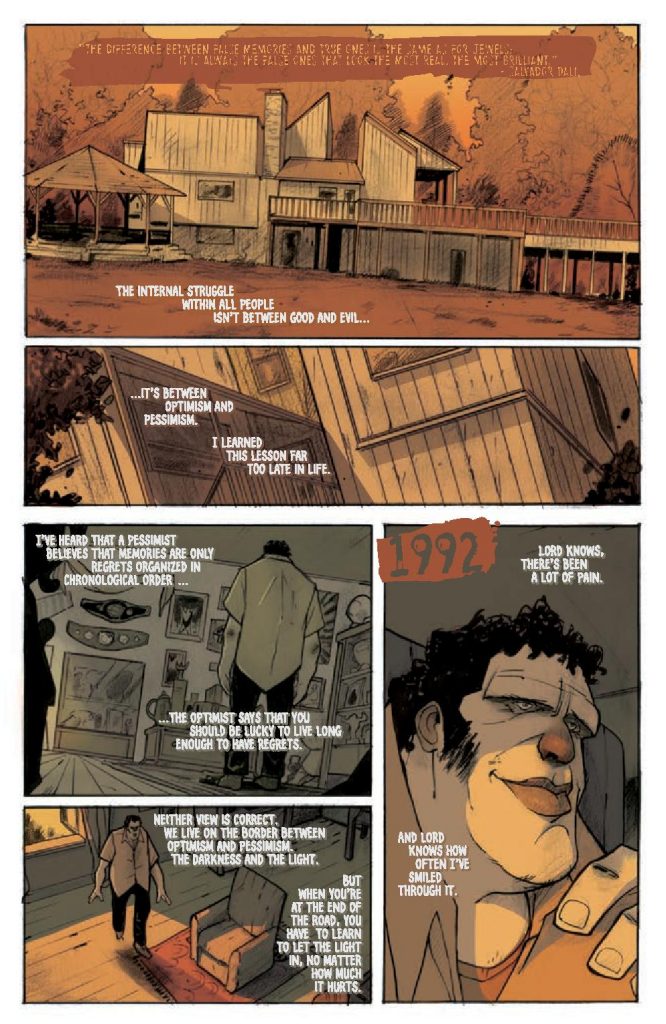 Throughout the book, Easton details events that wrestling fans pretty much know by heart. He talks about other wrestlers he’s met including big names like Hulk Hogan, Dusty Rhodes, Vince McMahon, and others. The story does a great job depicting how others felt of Andre too. He was pretty much the godfather of wrestling (Not the Godfather who wrestled for the WWF in the late 90’s mind you). For example, when Vince McMahon wants to include Andre in a scenario he respectfully presents the idea to him for his approval. Anyone with any knowledge of Vince McMahon knows that he doesn’t offer that courtesy to just anyone. There has to be a deep level of respect there and Andre more than had it.

Near the end of his life Andre suffered through some severe medical problems. He had back surgery which severely limited his mobility. This didn’t keep him down. He went back to work for the main event at Wrestemania 3 thanks to an offer from McMahon. Despite the pain he wrestled for three more years. He was in so much pain that apart from working a match he spent the rest of his days in a wheelchair or on crutches.

I know this personally because on September 18th, 1989, at the old Stadium Arena in Grand Rapids, Michigan, I saw my first World Wrestling Federation show live. There were some great performers that night like The Honkey Tonk Man and a very young Shawn Michaels in a tag team match that closed the show. The main event though was big. Intercontinental Champion The Ultimate Warrior faced off against Andre the Giant.

At that time, tradition was still honored so Andre, being the challenger, came out first. He lumbered down the aisle slow. I was in the cheap seats but man was he massive even from where I was sitting. Out next was The Warrior. His music hits and he runs down the aisle. He hits the ring, runs the ropes, clotheslines Andre, pins him, and runs out. The match was over in thirty seconds. The purpose of the feud was to get The Ultimate Warrior acceptance from the audience. By defeating someone like Andre who was considered such a massive threat, we as the audience would be endeared more to The Warrior. But even at age thirteen I knew something was wrong. Someone who was healthy didn’t move like Andre. Not soon after his WWF career was over. He ended up seeing the light after turning on Bobby Hennan at Wrestlemania 6. 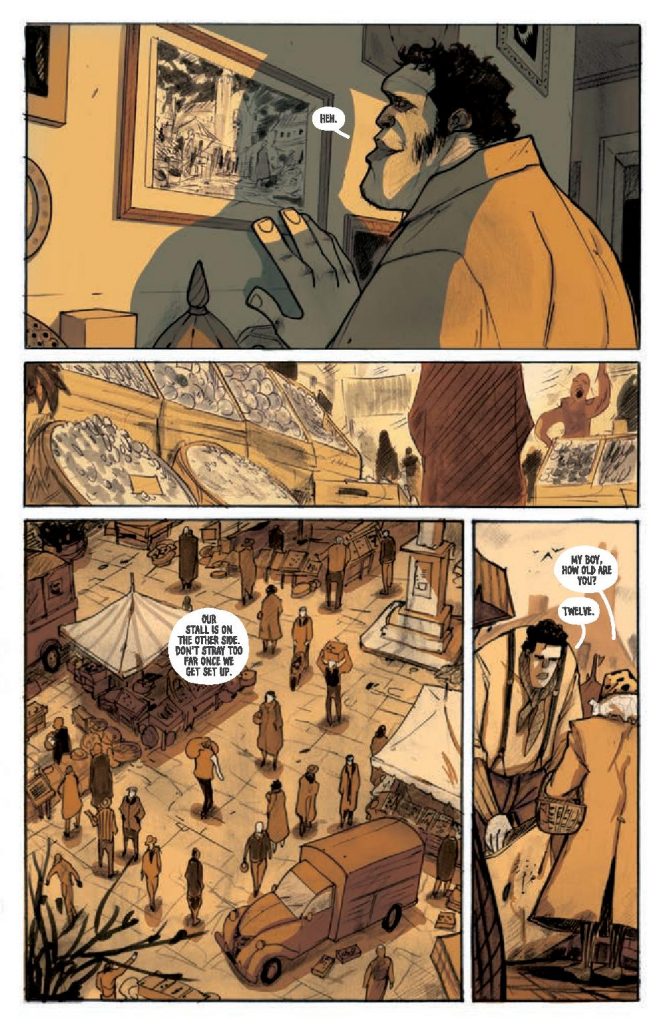 Professional wrestling to the average person can seem bizarre. Larger than life characters acting in ways that would get your or me arrested can seem silly to someone that doesn’t realize what makes it so great for us fans. What Andre the Giant: Closer to Heaven illustrates to me is that professional wrestling has heart.

Andre the Giant was not a perfect man. He made many, many mistakes. But at the end of the day, despite the pain he went through in his life whether it was self-inflicted or not, he was able to bring smiles to many faces. Whether that be as the good guy or as the bad guy being defeated by the new up and comers.

The artwork in this story does an amazing job of bringing out the heart of the piece too. It’s simplistic and cartoony…but if you think about it with the life whose story they are telling the art fits the piece. It has a warmth to it which brings a smile to your face during the bright times of his life and a darkness during the sad parts. If you’re not shedding a tear on the last page you may not have a soul.