Utopia has been achieved and society follows the Four Pillars of Community, Peace, Harmony, and Equality. In doing so, they have eliminated ambition, diversity, creativity, and instruments of capital. However, the utopia is about to be unraveled. How does it fare?

Matt Hawkins begins [easyazon_link identifier=”B018RDD6WA” locale=”US” tag=”bounintocomi-20″]Symmetry #1[/easyazon_link] introducing us to conflict and violence in an exciting chase sequence reminiscent of I, Robot. What makes the chase sequence really interesting is the narrative Hawkins provides detailing a perfect society without violence, sickness, or love. Yet, the protagonist is able to express love. The narrative contrasts with the art on the page really, reinforcing the falseness of the utopia.

Following the chase sequence, Matt Hawkins spends a significant number of pages fleshing out the world and explaining how utopia was achieved in Symmetry #1. However, he does it in a way that also develops the main protagonist, Michael. Hawkins details Michael’s journey through society from childbirth to a communal education facility to The Choosing and even on a vacation. The world is very reminiscent to what I saw on the big screen in The Giver. The main difference is the introduction of robots that perform all of the labor and a personal Responsive Artificial Intelligence Network Archetype (RAINA) that connects all of the citizens to the System Optimizer for Longevity (SOL).

The world has some definite holes and requires a willing suspension of disbelief to accept its premise. For example, Hawkins insists through the narrative that diversity has been eradicated; yet, citizens are still able to choose between a number of classes such as astronomy and plyometrics. Probably the most pressing issue is the equality pillar. Not all of the citizens are equal. There is a hierarchy created by age. You can’t move into a communal building until age 18, and you are not allowed to choose your name and gender until The Choosing at age 13. To top it off, the three eldest Elders are the only ones allowed to sit on the central committee and work with the AI. 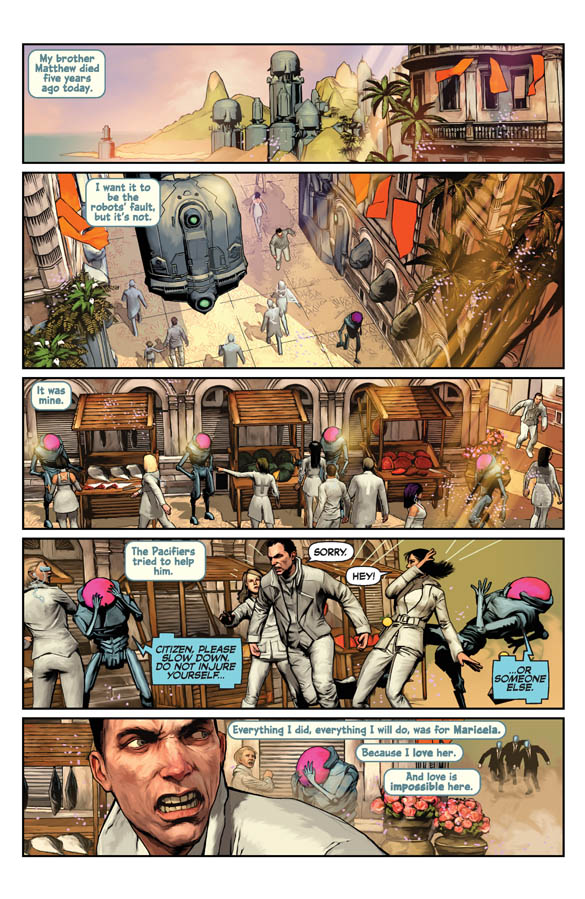 The main point of climax in the story also forces one to stretch the idea of utopia. It would seem the humans and artificial intelligence who created this utopian SOL forgot the first lesson Dr. Manhattan from Watchmen learned, “Re-assembling myself was the first trick I learned.”

Aside from these points of contention, Hawkins lays out an intriguing story that looks to examine the Four Pillars and what they eliminated in order to achieve them. Although, it is still a bit unclear as to where the story will be going besides questioning the fabric of society as all dystopians do. 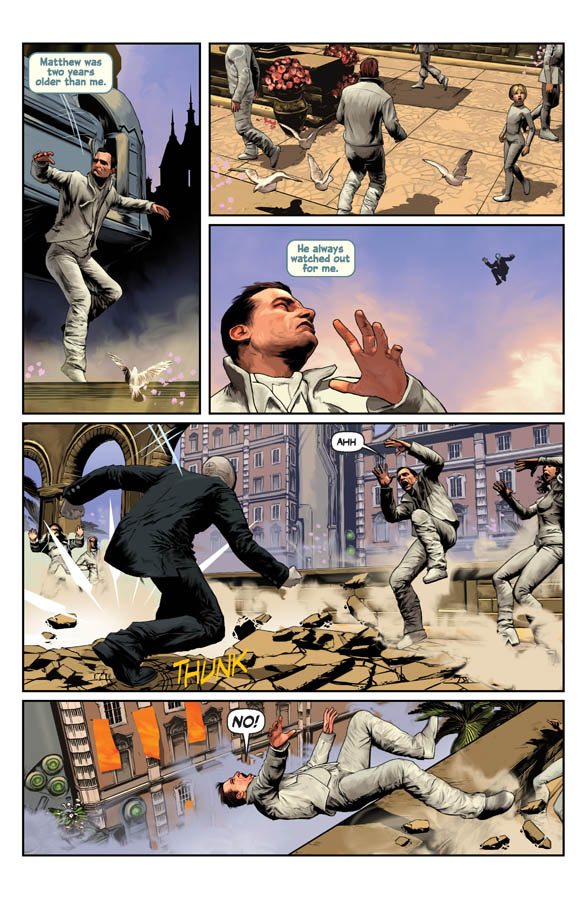 Raffaele Ienco’s artwork is decent. He gives you an idea that this is a futuristic society with sleek architecture. His use of lighting also evokes the sense of harmony Hawkins describes. However, it just doesn’t feel as austere as it should. For a society that lacks creativity, there are plenty of decorations on and inside the buildings. The buildings are also different shapes and sizes, once again neglecting the equality pillar. All of the citizens are also wearing different types of clothing, although he does make sure they are all plain white.

There are also some issues with Ienco’s facial expressions. At one point, Michael is supposed to be in shock. Instead, his expression looks like his face is being slowly melted off. It would fit well into Salvador Dali’s “The Persistence of Memory.”

[easyazon_link identifier=”B018RDD6WA” locale=”US” tag=”bounintocomi-20″]Symmetry #1[/easyazon_link] is an interesting dystopia that hopes to examine the faults and benefits in a society based on the Four Pillars. However, the world Hawkins creates based on these Pillars still needs some work as it requires quite a bit of suspension of disbelief. Ienco’s art doesn’t help you in suspending your disbelief with plenty of decorations, unique architecture, multiple clothing styles, and machine-made colors. There is definitely an intriguing dystopia here, but it is by far not the best we have seen in recent years.