DC Comics March 2016 Solicitations are here and are once again headlined by Frank Miller’s Dark Knight III: The Master Race. There are also a number of milestone issues with Batman, Superman, The Flash, Detective Comics, Action Comics, Aquaman, Batgirl, Catwoman, Green Arrow, Green Lantern, and Wonder Woman all reaching the 50 issue mark. I’ll be honest I haven’t been pulling much from DC except for Batman, Justice League, and Dark Knight. Are there any books you recommend that I should be reading in preparation for the March releases? 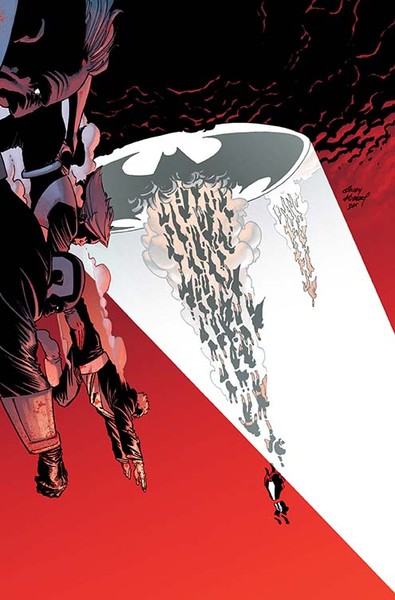 The Master Race will rise. Cities will fall. Bruce Wayne is dead. What will the heroes of the world do to save it? 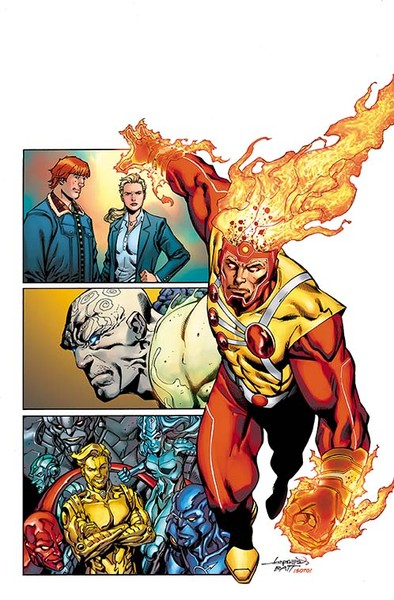 It’s four powerhouse tales in one colossal comic, as some of comics’ most legendary talents launch new tales of Firestorm, Metamorpho, Metal Men and Sugar and Spike—that’s right, Sugar and Spike!

FIRESTORM
Written by GERRY CONWAY
Art by EDUARDO PANSICA and ROB HUNTER
Firestorm is back! To save Jason Rausch, Firestorm will need to retrieve Danton Black’s stolen research from Professor Stein’s lab. But if Jason can’t fuse with Ronnie by the Firestorm Protocol…who can?

METAL MEN
Written by LEN WEIN
Art by YILDIRAY CINAR and TREVOR SCOTT
Doctor Will Magnus’ Metal Men may be the next step in robotics technology, but when the mysterious cyber-terrorist known only as Nameless comes after them, they may have met their match!

METAMORPHO
Written by AARON LOPRESTI
Art by AARON LOPRESTI with MATT BANNING
Metamorpho—a prisoner of millionaire industrialist Simon Stagg! Now, the only person who can save him is Stagg’s beautiful daughter, Sapphire!? But can they defeat Stagg’s prehistoric bodyguard, Java?

SUGAR & SPIKE
Written by KEITH GIFFEN
Art by BILQUIS EVELY
The last time we saw Sugar and Spike, they were still in diapers! Now, they’re grown up, and they’ve become private investigators who specialize in cleaning up embarrassing problems for the DCU’s greatest heroes. Sugar & Spike’s first assignment: retrieve a cache of Batman’s retired costumes that have been stolen by Killer Moth! 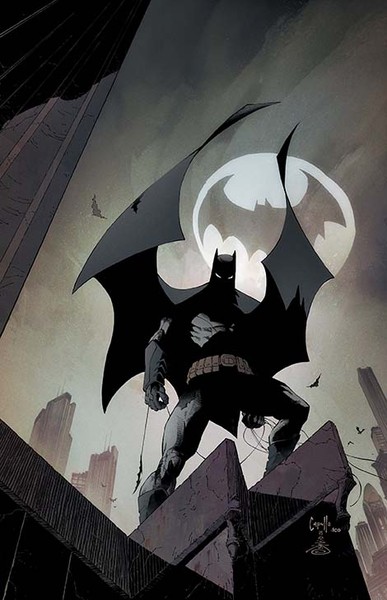 Batman has returned to Gotham City! In this extra-sized conclusion to Snyder and Capullo’s epic story “Superheavy,” Bruce Wayne returns to the cape and cowl to battle Mr. Bloom alongside Jim Gordon for the fate of the city they both love. 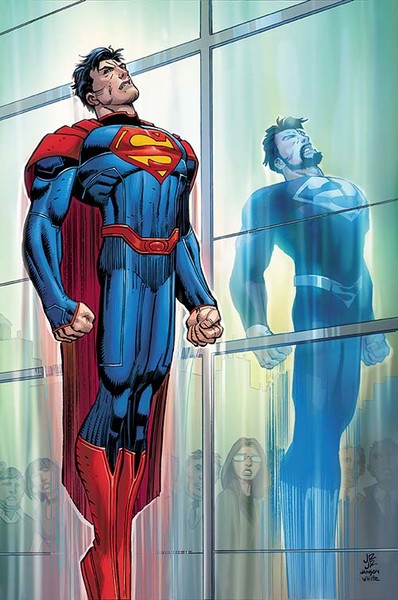 Superman returns in all his glory in this very special issue that sees the Man of Steel back to full power as he faces his greatest enemy and also comes face to face with the pre-Flashpoint Kal-El! At last, it’s the meeting of the Supermen you’ve been waiting for! 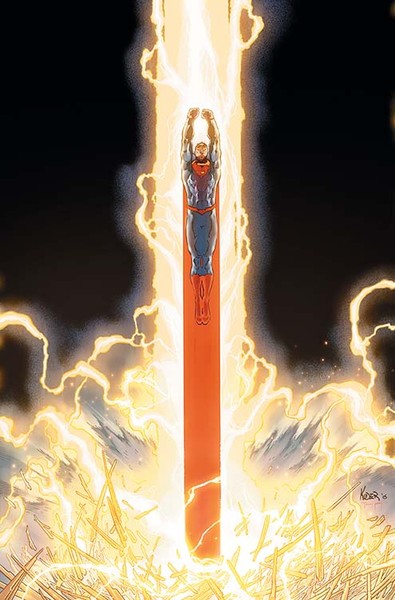 Clark battles his way through Vandal Savage’s hordes to reclaim what is rightfully his—the Fortress of Solitude and his birthright! This epic anniversary issue leads to the finale of “Savage Dawn” in this month’s SUPERMAN/WONDER WOMAN #27 and SUPERMAN #50! 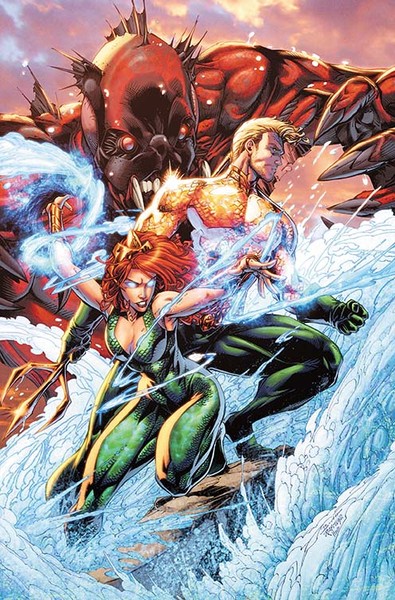 Dead Water is a killer and a monster. No matter where you go, he can reach you if there’s even one drop of water present. Pray that Aquaman finds you first! And the most famous oceanic hero on Earth is Aquaman, right? In our gala 50th issue, make way for…Aquawoman! 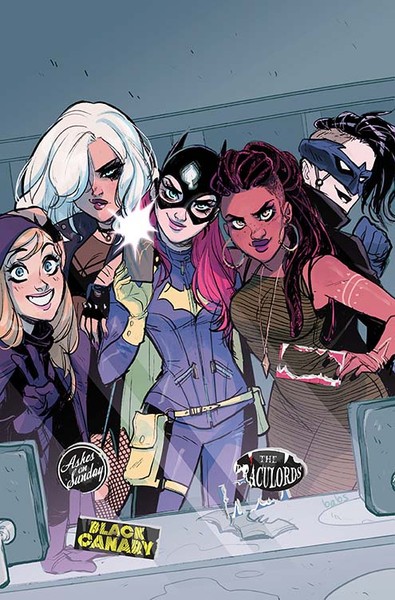 It’s the explosive conclusion of the epic that changed Barbara Gordon forever! The enemy lurking at the edges of Batgirl’s life has been revealed, as have the gang of heroes assembled to help her! From this point on, Batgirl doesn’t walk alone! It’s an extra-sized celebration of the greatest hero Burnside has ever known, from Cameron Stewart, Brenden Fletcher and Babs Tarr! 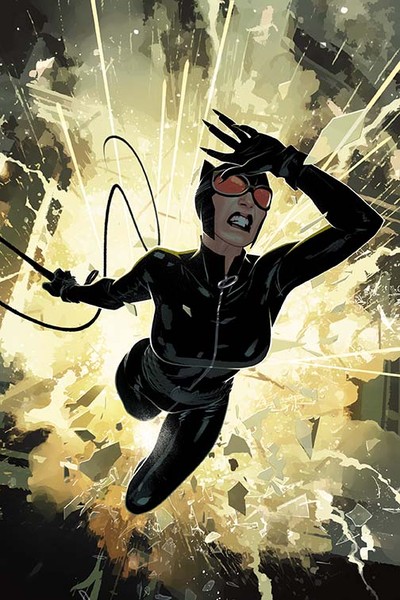 Catwoman behind bars?! Thrown into jail with criminals who are still looking to collect a bounty on her head, Selina has to work with her shadowy helper, Mr. Blond, in order to escape and get to the bottom of the mystery behind the Frost Diamond. Shocking revelations will be made before the end of this extra-sized conclusion to Tieri and Miranda’s “On the Run” adventure! 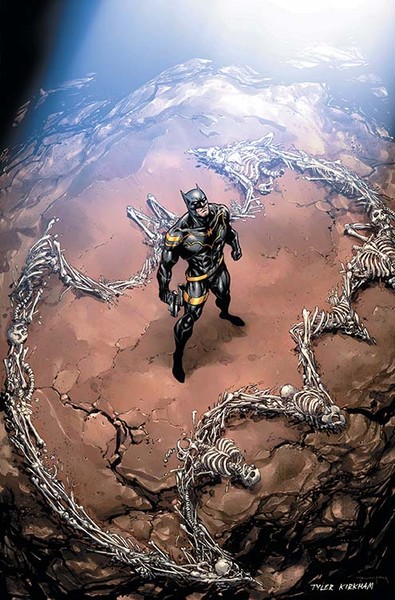 Jim Gordon faces his past in this extra-sized conclusion to his most shocking cold case yet. With history itself forcing him to reflect on the last year as Batman, Gordon must make a decision about what his future holds in Gotham City. 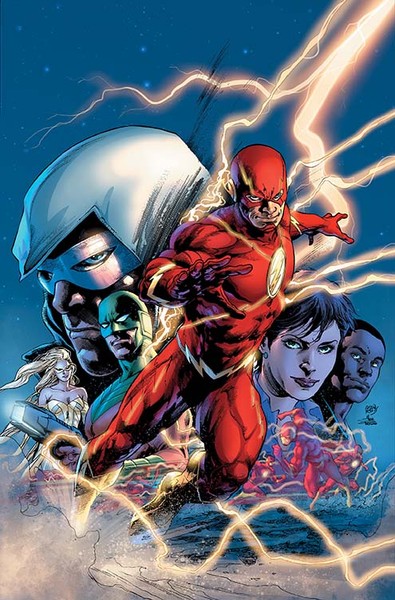 In our massive 50th issue, The Flash must win back the trust of Central City! But to do so, he needs to outrun the police force that’s been charged with bringing him down—with the awesome power of the Rogues behind it all! 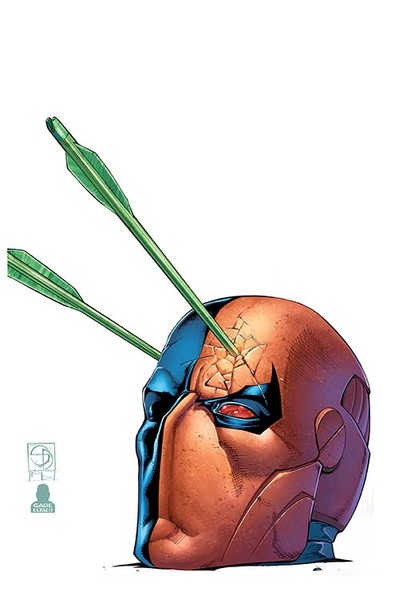 In our anniversary 50th issue, Green Arrow and Deathstroke race across the globe to find the Miracle Man, whose blood can cure any disease! And the Tarantula returns—but even with her assistance, she and Green Arrow are no match for the perfect assassin! 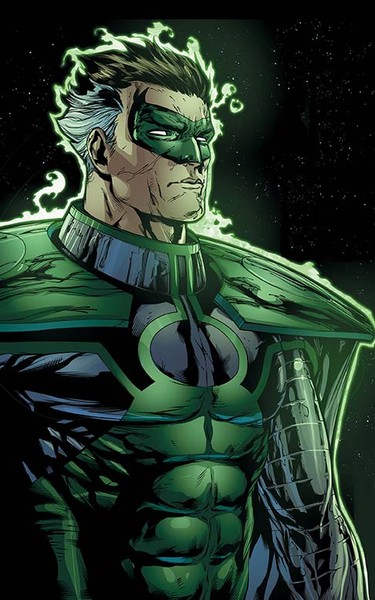 In this extra-sized issue, it’s a battle for the fate of Earth! Parallax believes Hal Jordan has failed this universe—and now, he’s prepared to wipe Hal out of existence! Hal has to get over the shock that Parallax still exists so he can unleash the power of his gauntlet to stop him! It’s a battle neither Jordan can win, and one that will change both forever. 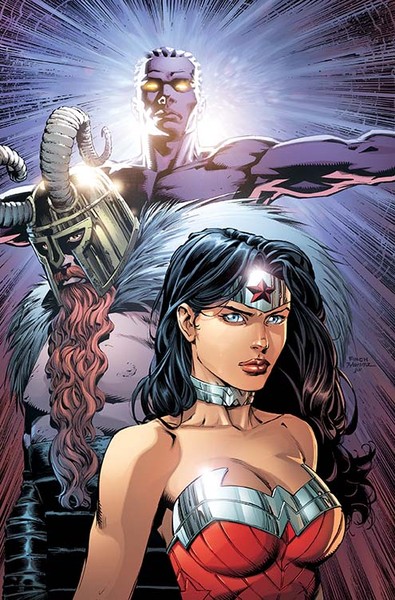 It’s a special super-sized 50th issue! Wonder Woman continues her quest to save Zeke and Olympus, but is she prepared for what she might find? Long-buried secrets suddenly brought to light will call into question everything she thought she knew about those she loves and trusts the most.