Prowl has been captured and his dark secrets may soon be revealed. However, The Wreckers are on the hunt to rescue him. Will they be able to get to him in time? How does it fare?

[easyazon_link identifier=”B0197AG4IU” locale=”US” tag=”bounintocomi-20″]Transformers: Sins of the Wreckers #2[/easyazon_link] at its heart is a rescue mission. Prowl and the Aequitas have been captured and The Wreckers are called into action to rescue him and recover the Aequitas. However, it is much more than a rescue mission. There is deception, intrigue, and plenty of action, but the highlight is the interaction between and among The Wreckers.

While the sheer number of The Wreckers still overwhelmed me, I truly enjoyed the dialogue and interaction they had with each other. You can start to see the very different personalities each of them has in their disagreements and arguments about what their next move will be or how they handle certain situations. It is truly a diverse cast that manages to work together despite their pointed differences.

Not only does writer Nick Roche give each of The Wreckers a different personality, he is also able to do an excellent job of exposing their character flaws, whether it is incessant bloodlust or an accusatory and suspicious nature. They each have their own little quirks that helps differentiate them and further flesh out their personalities. 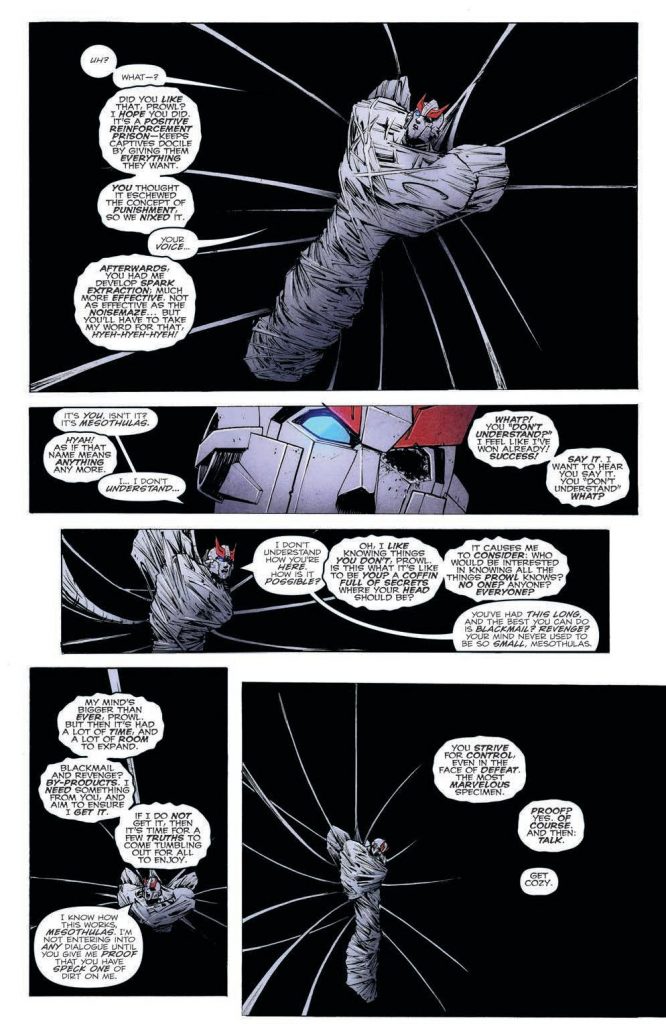 One of the best parts of the book is how Roche characterizes and reveals the villain. He does it almost exclusively through dialogue with assistance from letterer Tom B. Long. He never gives us an image of the villain, keeping him off page, but the dialogue is menacing as he threatens and coerces Prowl to his own seeming advantage. The lettering and word bubbles play up to his villainy as Long gives them an almost shaking effect. This effect makes the villain feel like he is constantly raging with anger, yet at the same time it is still under control, at least for the time being.

Nick Roche’s artwork is once again fabulous. I really love how he depicts the transformations, with the robots usually faded in the background and their machine shapes in the foreground or vice versa. There is one panel that really hits home when he depicts the core group of Wreckers heading out to track down Prowl.

The layouts are done really well and what he doesn’t explain in dialogue he captures in images to characterize The Wreckers. We really get to see this with Springer as he experiences a type of PTSD. It is really moving and makes you empathize with the character and adds to his traumatic back story. 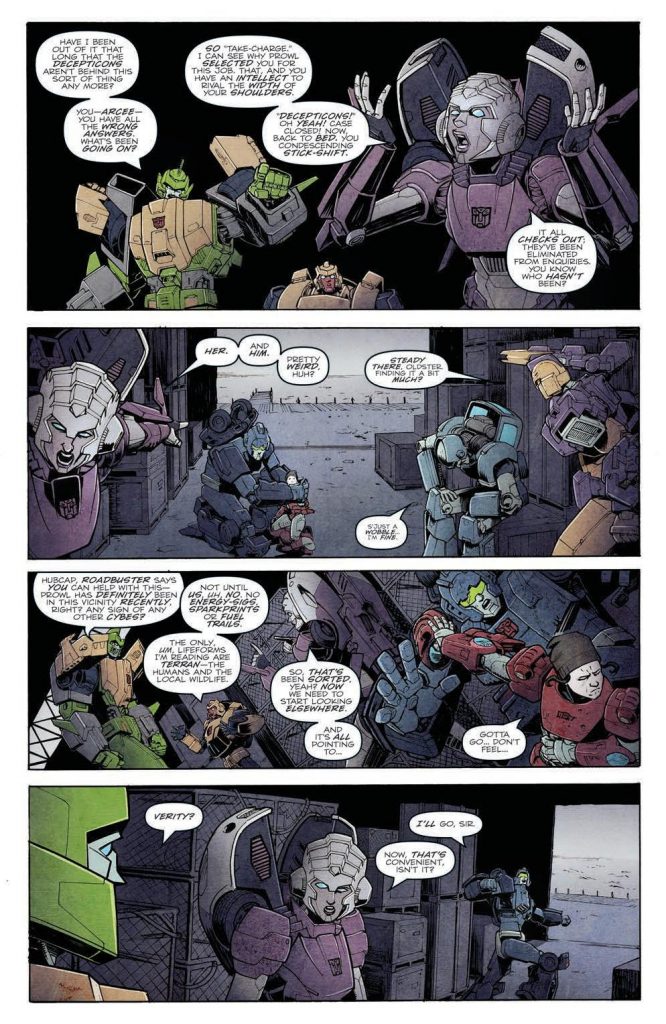 There was one minor issue with the art. There was a panel where Arcee is holding her sword, but it is juxtaposed with Springer firing his gun. Arcee’s sword looks like a gun blast striking her in the chest. I had to do a double take to see what if anything had happened to her. There is also a scene with Roadbuster wielding a gun that is almost smaller than his hand. It is almost comedic due to his massive size. It looks as if Roche ran out of space so he couldn’t make the gun any bigger on the panel.

The action sequences are a lot of fun and there is always a lot of tension and a sense of danger. However, it does lack strategic planning. The Wreckers just go in head first without making any plans to outmaneuver or outsmart their enemy. However, this does get to how individualistic The Wreckers are. Nevertheless, it is still exciting and puts you on the edge of your seat.

[easyazon_link identifier=”B0197AG4IU” locale=”US” tag=”bounintocomi-20″]Transformers: Sins of the Wreckers #2[/easyazon_link] is a gritty, dark tale that explores The Wreckers’ characters while expanding on the current state of affairs of the Transformers’ political landscape. It does a great job with characterization through the dialogue, lettering, and artwork. It also has a ton of enjoyable and satisfying action sequences. However, there were some minor issues with the art and a lack of planning when it came to confronting their enemy and it was still somewhat difficult to determine which Transformer is which.