Vampirella and Lars continue to be hunted by the Aliens, going so far as to provoke the wrath of a brood mother. Fortunately, they have found some help, but is the help another new foe? How does it fare?

[easyazon_link identifier=”B018W46JF0″ locale=”US” tag=”bounintocomi-20″]Aliens / Vampirella #5[/easyazon_link] begins right where the last issue left off with an intense horror sequence, having us worrying over what is going to happen to Vampirella and Lars as they fall into the clutches of this new character. It is quite exhilarating, fretting about what this new character is going to do to them while also somewhat of a relief to see what his initial action actually does. Corinna Bechko sends your emotions all over the place! She puts you in a place where you think you can relax, but then, right when you’ve gotten comfortable, she shakes things up and puts the characters in danger; and, it’s not just Vampirella and Lars.

She is also able to instill fear in Tucker’s ground crew. If this was a movie, it would be incredibly frightening and extremely gory. I can just imagine the popcorn flying into the air as the theater fills with screams. 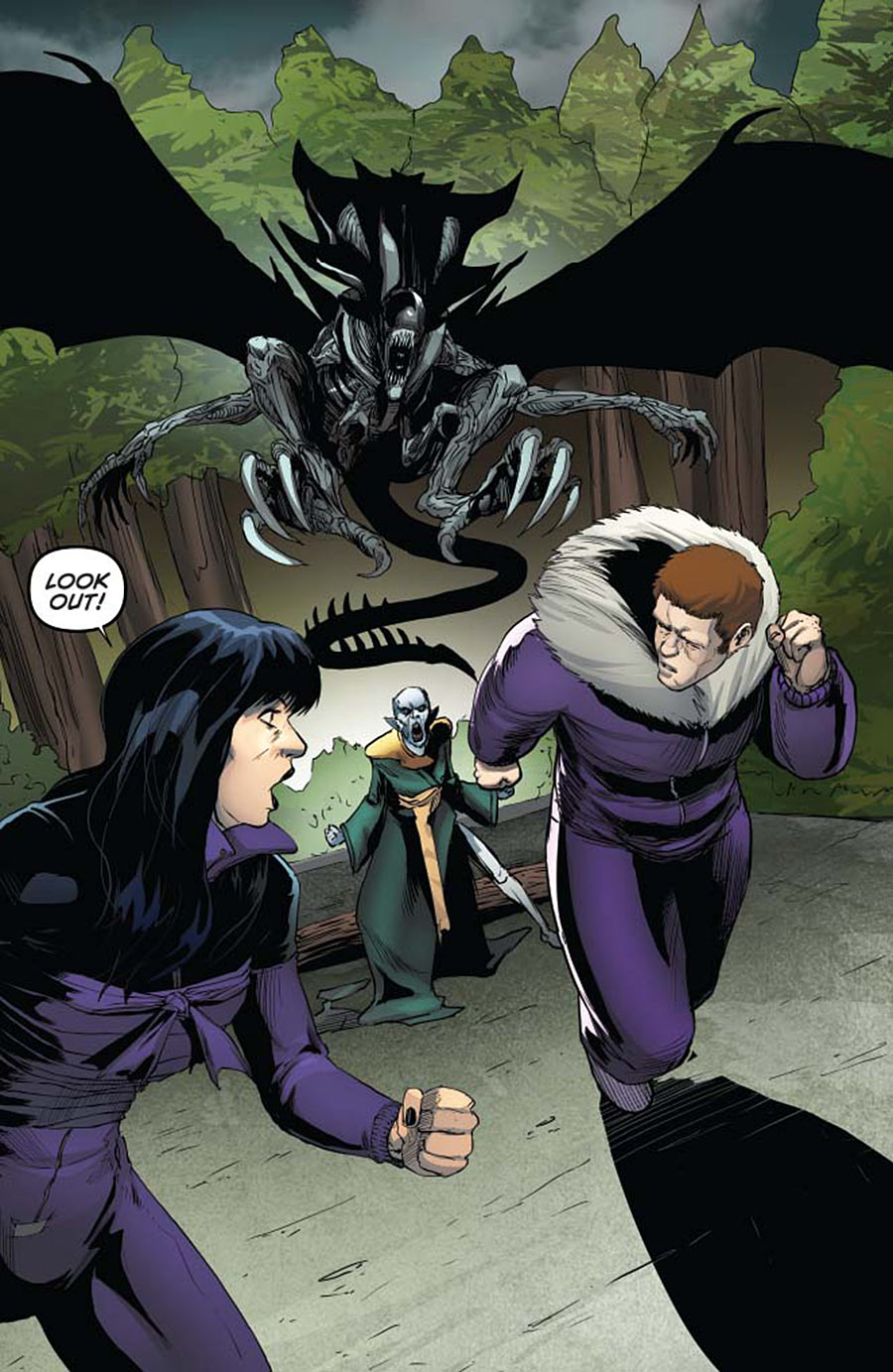 The pace of the story does grind to a halt about halfway through. Bechko for some reason decides to give us some lengthy exposition, detailing the reason for the vampire base and how the Aliens came to inhabit the facility. Oddly enough, the story is pretty similar to how they currently came to occupy the facility. It’s tough to get through and doesn’t really add anything to the core of the story. It appears to be page filler. It does do a good job of lulling you into complacency.

Bechko exploits this complacency with one of the cruelest scenes done to a character. It is absolutely terrible and shocking. At the same time you figured this was going to happen sooner rather than later. It is one of the most horrific scenes in comics I have read.

Garcia-Miranda’s artwork perfectly captures the scene using six sequential panels inset into a splash page. The sequential panels get progressively larger as you move across the page, showing the progression of emotions between two of the characters until you finally see what they are looking at. It is truly horrifying and crushing.

Not everything is as good as this scene. On the first page, Garcia-Miranda seems to give Lars’ jacket a little extra padding, making him appear to be much larger than what he has typically been portrayed. On the second page, there is a transformation sequence, but in one of the panels the head appears to have been blown off. It just looks odd and doesn’t fit in with the rest of the surrounding panels. 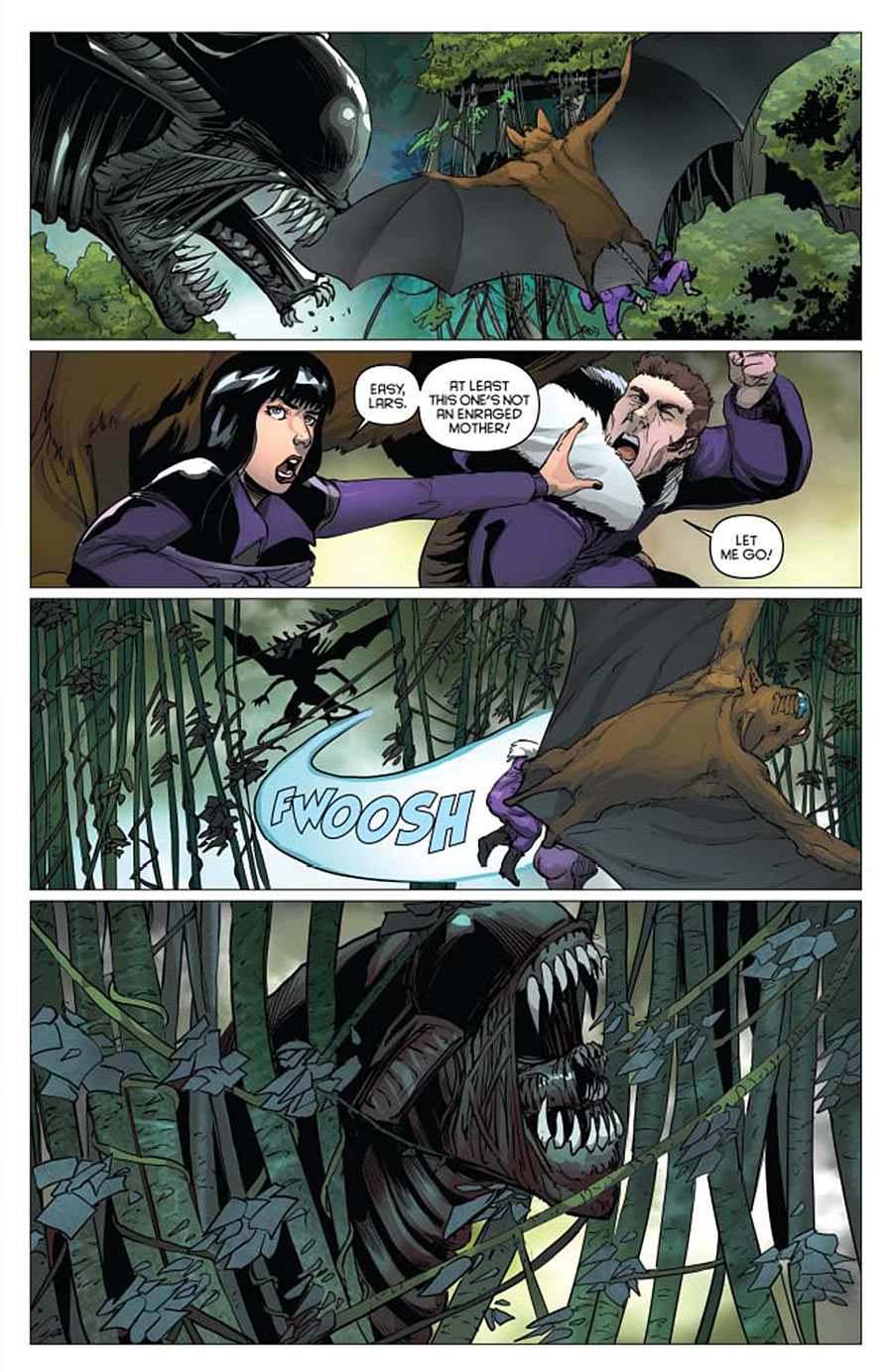 Probably the biggest error in the artwork comes from the geographical layout of a tunnel. It appears the tunnel runs horizontal as Vampirella, Lars, and their new guest are able to crawl through it. However, when Garcia-Miranda uses shots from outside the tunnel, it appears as if it runs vertically. In one panel, he specifically depicts the Alien brood mother mounting the tunnel in a vertical position. It’s a little disconcerting.

There are also some odd facial expressions. In the last panel of the book, Vampirella’s lips appear to be sagging down the right side of her face. It looks really odd and out of place given the desperate nature of Bechko’s dialogue for this panel.

[easyazon_link identifier=”B018WHUU52″ locale=”US” tag=”bounintocomi-20″]Aliens / Vampirella #5[/easyazon_link] continues a great horror tale with a number of excellent chase scenes, an absolutely gut wrenching emotional climax, and a never ending amount of trouble and danger that follows Vampirella. However, the book’s pace slows down quite a bit as Bechko provides a ton of really unnecessary exposition halfway through the book. There are also a number of minor art mistakes that add up throughout the book, but it is still one of the best horror stories out there right now.