Magic has long been in his bloodline, but Cinder was born without a connection to it. In order to acquire his family’s gift, he has spent ten years hunting down an ancient spell. Now he finally has the last piece of the spell, but his unscrupulous methods have caught up with him. Will he be able to acquire his connection with magic before he is dead? How does it fare?

[easyazon_link identifier=”B019JPQ97E” locale=”US” tag=”bounintocomi-20″]Gutter Magic #1[/easyazon_link] introduces us to an extremely interesting and bustling world filled with magic, artifacts, danger, intrigue, and even a taste of politics. It does this by following Cinder, a human on a mission to attain his family’s gift of magic, and his friend Blacktooth, a well-connected and knowledgeable goblin.

The story moves at a rapid pace as Cinder and Blacktooth find themselves in increasing levels of danger. However, it just doesn’t jump from action scene to action scene. Writer Rich Douek and artist Brett Barkley set up the story with three main points of conflict or action and in between they flesh out the world while also developing the main characters and progressing the story. Two of the more prominent supporting characters that make this world so interesting are a ratcatcher who has spies throughout the city and an information dealer with rare historical artifacts, one that just might have the answers Cinder is looking for.

Rich Douek’s dialogue is for the most part very good. He provides exposition in a very believable manner in conversations between Cinder and Blacktooth. He also does a great job of subtly hinting at the larger picture, asking questions on why a certain individual doesn’t have a statue next to his father. There was one point in the dialogue where it just didn’t make sense. It looked like Douek had wanted to go one way with the character, but then decided to make a change. However, it appears he forgot to edit out the original dialogue. 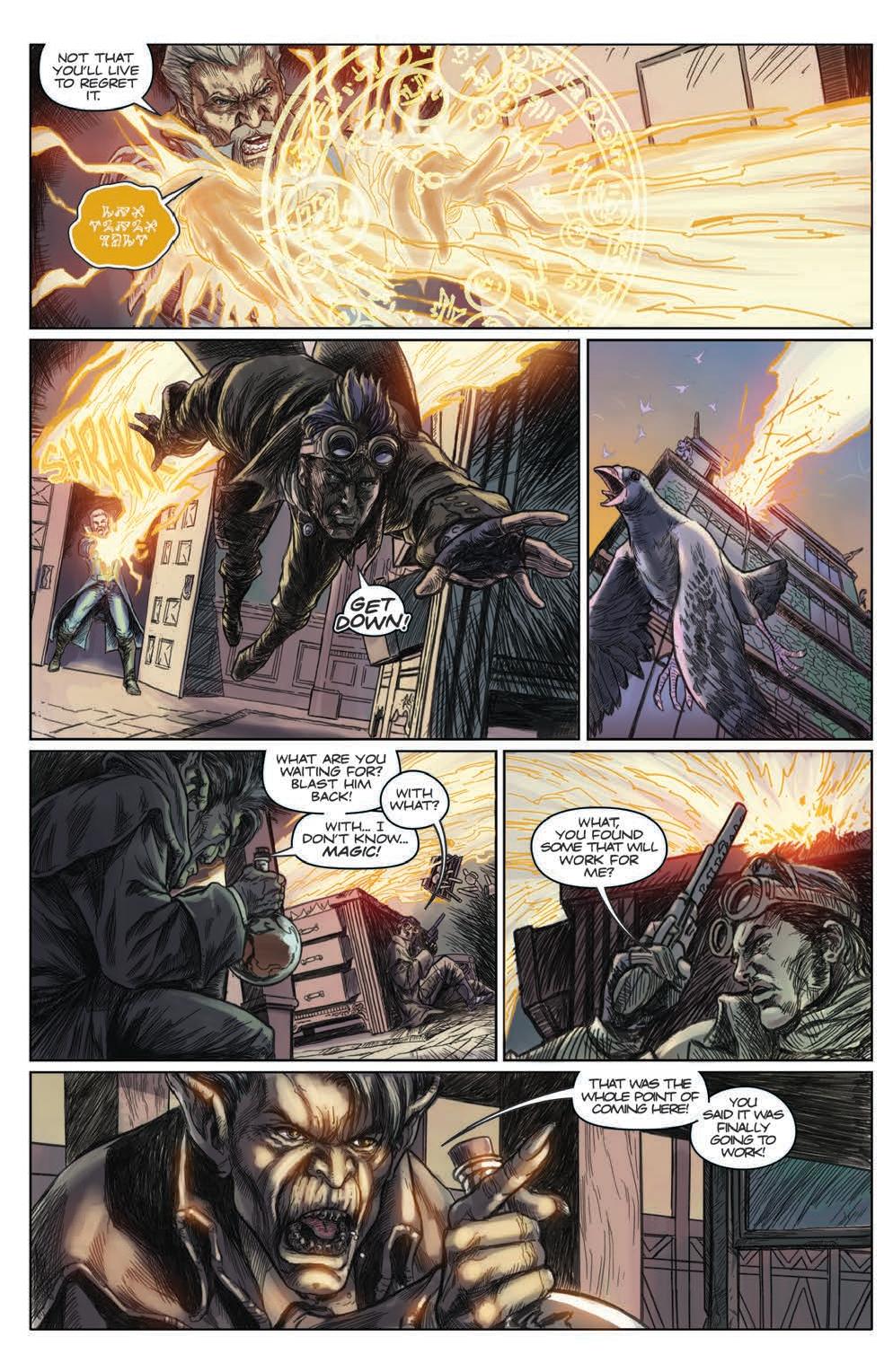 Brett Barkley’s art style captures the fantasy elements of the book in wondrous fashion. I love how he imagines the magic spells with runes and wards appearing in front of the magic caster that upon certain hand movements launch massive energy blasts or form a protective shield. You can also see the tiny pencil details he adds in every panel to give the world a rough and dangerous look. In addition, he does an excellent job with the character designs, giving it a steampunk quality with turn of the century styles such as top hats and three piece suits. Cinder’s glasses are also a defining characteristic; I just hope they also provide a function rather than just for looks.

The action sequences are exhilarating as you are unsure of what is going to happen because individual’s skills or abilities are still being detailed to us. The first action sequence is laid out fantastically in an eight-panel page that begins with large horizontal panels leading up to the climax of the battle. My favorite part of this sequence is two panels in the middle of the page that depict an enemy mage attacking Cinder while a flask comes hurtling at him. In the upper panel the mage is intense and focused, but in the subsequent page, the mage’s attention is drawn to the flask and you can just see this “Oh crap!” realization dawning on his face. It’s an excellent touch detailing the intensity of the battle.

One of my favorite parts of the book allows Barkley to use his imagination and show us that the possibilities for the world of Gutter Magic are almost endless. He channels Inception, depicting the market street defying the laws of physics as Cinder and Blacktooth attempt to flee a number of pursuers. It is a pretty trippy two-page spread. 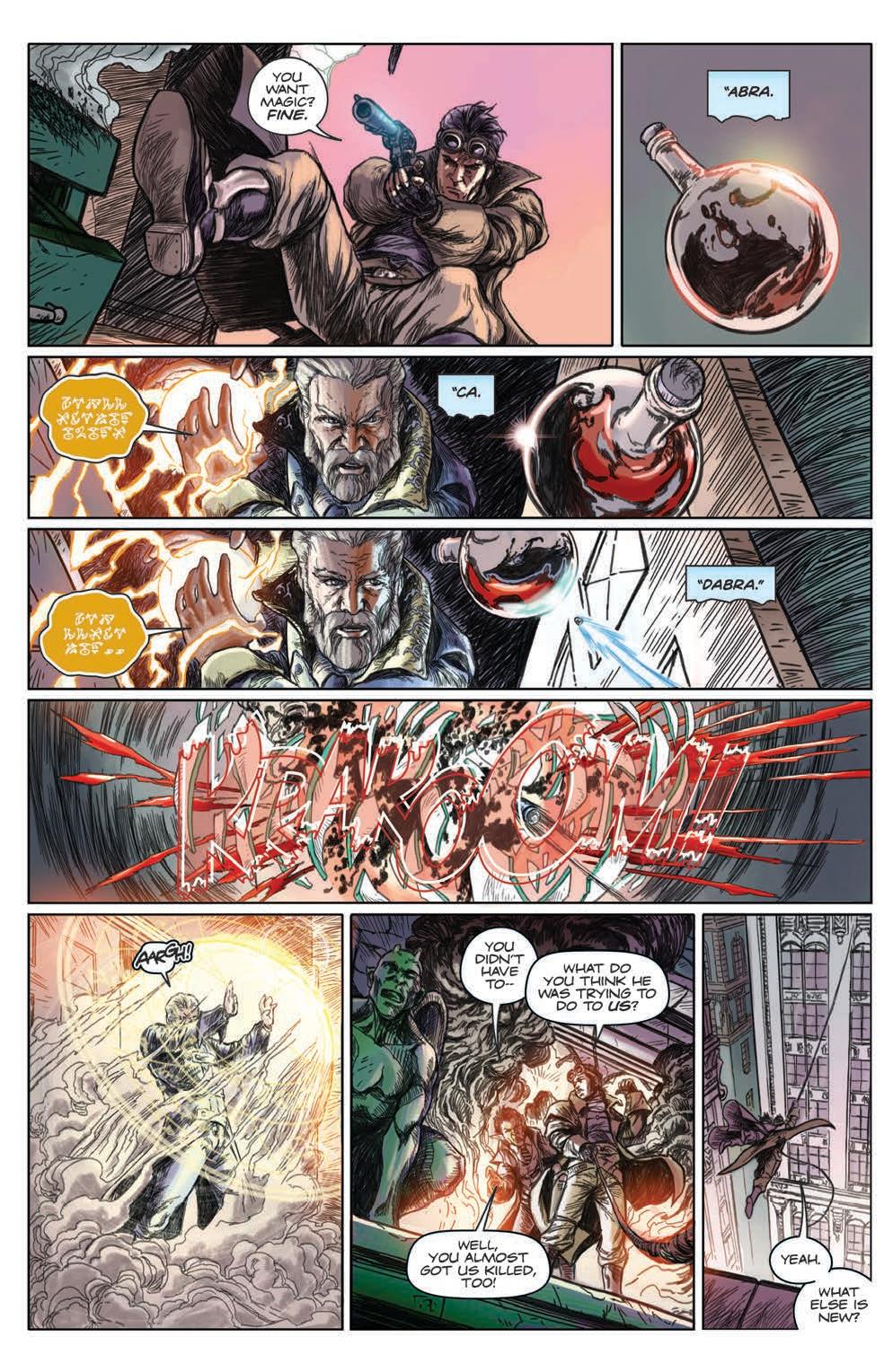 There are some issues. In one panel the characters and buildings in the background appear to lose their depth; they appear flat. Instead of having the corner of the building at a right angle, the side rolls into the connecting side making it look like one complete side where there should be two.

Jules Rivera’s colors set the tone for the book, keeping most of it rather dark with it taking place during the night or in a dimly lit tavern and mage’s tower. It adds to the sense of danger Cinder and Blacktooth seem to always find themselves. However, at one point he does brighten the scene quite a bit, showing the hustle and bustle of the market. It makes the world feel quite alive, but he is able to quickly remove this brightness with some bluish purple cloud cover signaling danger has once again found our protagonists.

[easyazon_link identifier=”B019JPQ97E” locale=”US” tag=”bounintocomi-20″]Gutter Magic #1[/easyazon_link] is an exciting, dark fantasy adventure that will want you coming back for more. It has awe-inspiring magic battles, cool magical artifacts, interesting and well thought out characters, and some great artwork. There are some minor setbacks with one out-of-place line of dialogue and some issues with the art. This is one you will want to check out if you are looking for something different in your fantasy genre that has an exciting, dangerous, and interesting world.