Get ready to follow Luna during her daily life as she adopts a pet, learns a cooking recipe, attempts to find her optimal figure, and just attempts to live her life as a Vampire in space. How does it fare?

[easyazon_link identifier=”B019X2ZOCE” locale=”US” tag=”bounintocomi-20″]Luna the Vampire #1[/easyazon_link] is split into three different and separate stories that humorously provide allegory for regular, everyday occurrences. The first story follows Luna as she receives an invitation to her uncle’s party. Writer and artist Yasmin Sheikh takes us through a range of Luna’s emotions as she prepares and attends the party. She uses a lot of exaggeration in both the lettering and her art style in order to portray these emotions. The exaggeration of Luna is what really sells the story’s humor although it can also make it a little too predictable. You are able to figure out what the joke is about, but you just don’t know the exact punch line.

Each of the three stories also provides a number of cultural critiques whether it is online shopping, the consumption of entertainment and advice magazines, following cooking recipes, or adopting a pet. Sheikh is able to make clear points about each of these issues, while also not having the comic feel like it is hitting you over the head with it; mainly because she makes her points through some pretty good visual sarcasm. 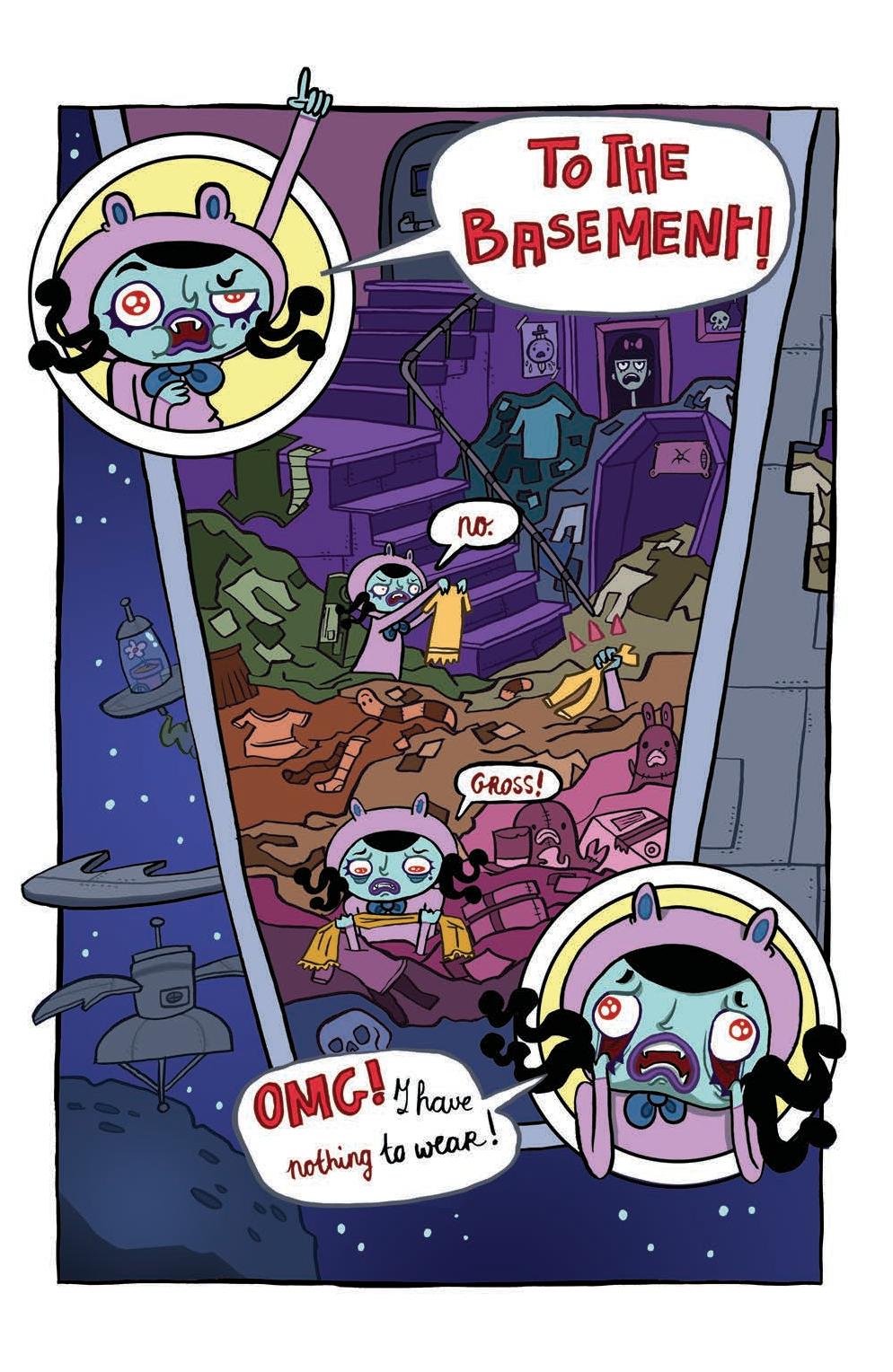 Sheikh’s art style probably won’t be for everybody and it is definitely not my favorite, but she is able to effectively get what she wants across. Her art style reminds me a lot of The Fairly Oddparents from Nickelodeon except she creates this gross vibe throughout each of the stories. She does this by adding in small details such as drool coming out of a character’s mouth or adding in odd lumps to the characters. Some characters even appear as if they are literally melting down in their old age as they walk into a pet store.

The panel layouts are pretty basic, although there are a couple of pages where she extends the panel count upwards of ten. On the first page, Sheikh for the most part eschews having the panels separated by hard lines. Instead, she allows the white space to act as a panel separator. It works really well and she even saw that there might be a place where you would be tempted to read down the page so she subtly added an arrow to show you where to go next. The second one creates three vertical panels, but within these three panels there are four separate panels each. It was a great way of showing each of the different responsibilities Luna had for taking care of her pet. 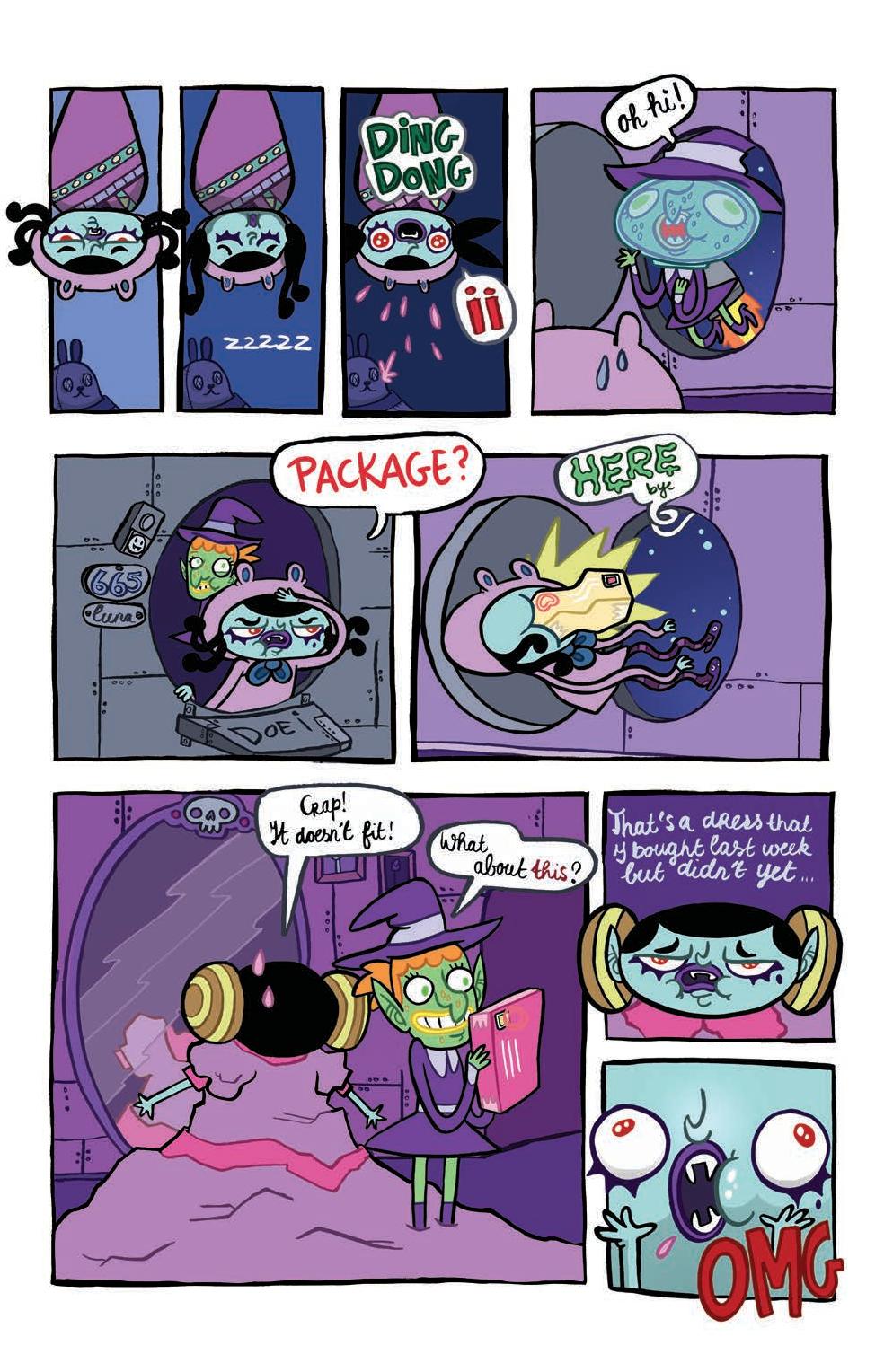 The lettering was very interesting. Sheikh predominantly used a cursive font, which does make some of the words a little difficult to read, but would also include massive block letters. She would also switch up the coloring of certain words within the dialogue to provide greater emphasis. The lettering with the cursive and larger emphasized words made it feel like you were almost reading a journal entry of someone’s life events. It gave the book a more personal touch like Luna was one of your friends.

[easyazon_link identifier=”B019X2ZOCE” locale=”US” tag=”bounintocomi-20″]Luna the Vampire #1[/easyazon_link] is a humorous adventure chronicling some of Luna’s everyday activities while also providing a clear, cultural critique of how Luna and her friends react to certain situations in addition to how her friends interact with her. The artwork is a tad too cartoony for my taste, but serves the humor and tone of the book. Yasmin Sheikh did a great job of exaggerating facial features to convey emotion as well as foreshadowing her punch lines. It was good.