Thomas Ketchum has been arrested, but in exchange for his freedom he is offered the job of Sheriff while the Judge and her Dusters continue to track him down. Will he be able to escape before she arrives? How does it fare?

Black Jack Ketchum #2 continues to keep the entire plot a mystery as writer Brian Schirmer takes us on a whirlwind and at times confusing journey in and around Snowtown. You aren’t able to fully comprehend or make sense of what is happening until the very end of the issue where Schirmer reveals enough for it to start making sense, letting you piece together the previous pages based off of this new knowledge about the world.

The story seemingly begins anew and completely unrelated to the first issue. The characters are all present from the previous issue, but the actual setting is radically different, taking place in and around Snowtown. Aside from the seemingly unrelated storylines, the story is told in a more linear fashion than the first issue. However, Schirmer jumps between scenes quite a bit with little to no mention of it happening. For instance, the dialogue seems to tell us Tom is making a deal with three individuals who have him inside a jail cell. Artist Claudia Balboni depicts the conversation happening, but as it continues her artwork transitions to a man flying through a window and then onto Tom’s sidekick with rifle in hand standing over a completely different person apparently lying dead in the snow. Balboni continues these transitions showing a different scene for about two pages. The pace moves rapidly making it hard to process what you are actually reading and seeing. 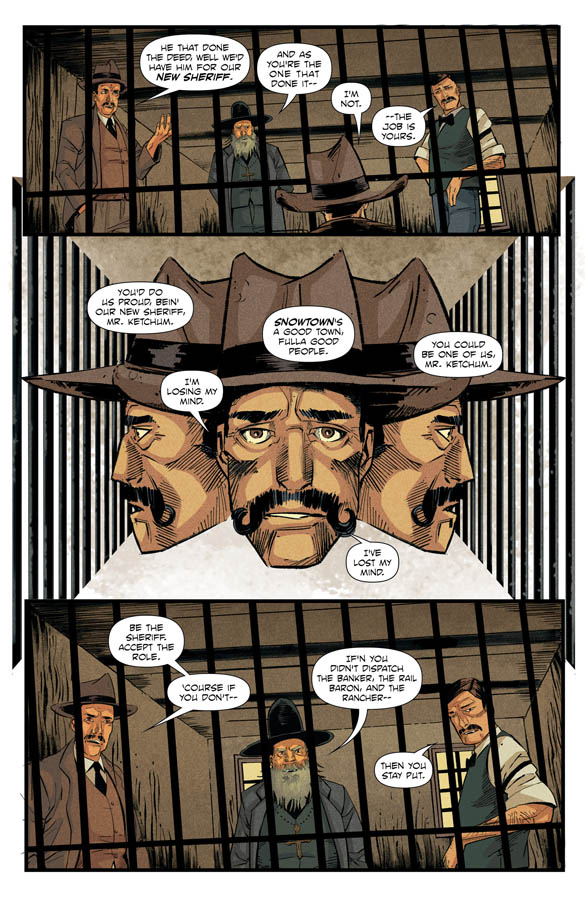 Once the pace finally slows down, Schirmer seems to provide some hints as to what exactly is happening to Tom and how the world of Black Jack Ketchum operates. However, he does it through the ravings of a seemingly mad man who ironically is now locked in the same jail Tom found himself in earlier.

Schirmer’s characters are all interesting, but he doesn’t really provide enough information about them in order to really figure out who they are. Certain characters like the raving madman only show up for a few pages and are gone. It adds to the mystery of the book, but also gives it a sense of madness. The one character he does characterize well is the villain. Not only was she extremely threatening just by her appearance in the first issue, but Schirmer gives a line of dialogue towards the end of this issue that will have you quaking in your boots. I would not want the Judge hunting me down. 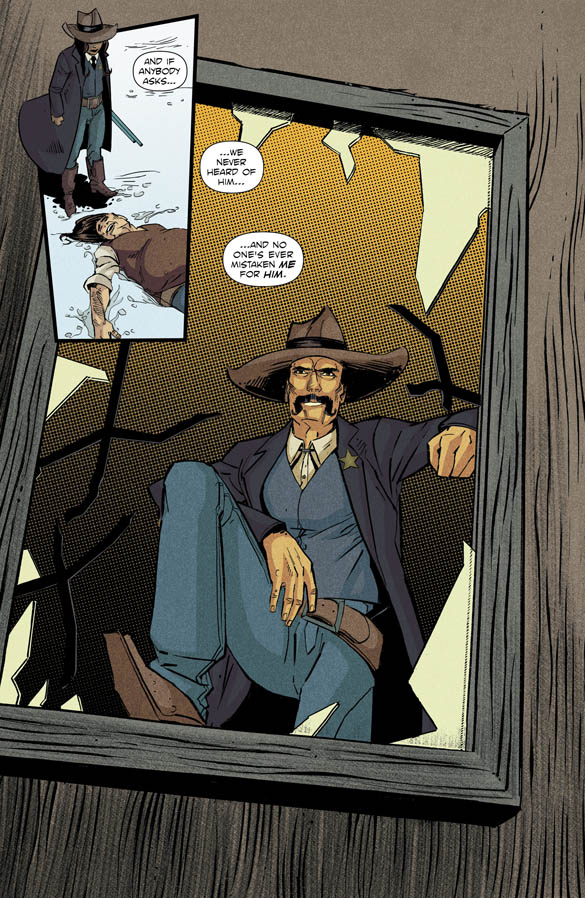 The dialogue is actually quite fantastic and foreshadows quite a bit of what happens throughout the book. It will probably take a second read through in order to appreciate just how good the dialogue is and how interconnected to the story it is. Every word Schirmer uses is meaningful.

Claudia Balboni’s artwork is solid. It definitely gives the book its Western feel. The page layouts are pretty standard with some minor play with basic inset panels. There was one inset panel which was radically different, being in the shape of a tombstone. I’m sure it has some kind of significant meaning, but at this point it is unclear. She does a good job of visualizing the conversations and provides a number of different camera angles and when she does use the same angle it is to emphasize a point and it plays extremely well with Schirmer’s dialogue.

Black Jack Ketchum #2 is an interesting story. It is definitely one that will require a couple of read throughs to truly get a grasp on what is happening, but the more you read it the more you see how well the book is structured and the dialogue is crafted to foreshadow and hint at future developments. Despite this, it will still be tough for some to get into this one as it does take you through a whirlwind and keeps a lot of its cards still close to its chest. For now the premise and the characters have me wanting more.