Archie and Dark Circle Comics April 2016 Solicitations are here! They include your mainstays such as Betty & Veronica Comics Double Digest and Archie Comics Annual as well as new on-going such as Black Hood, The Shield, Jughead, and Archie. They have also unveiled a 1000 page 75th Anniversary special! What will you be picking up in April from Archie and Dark Circle? 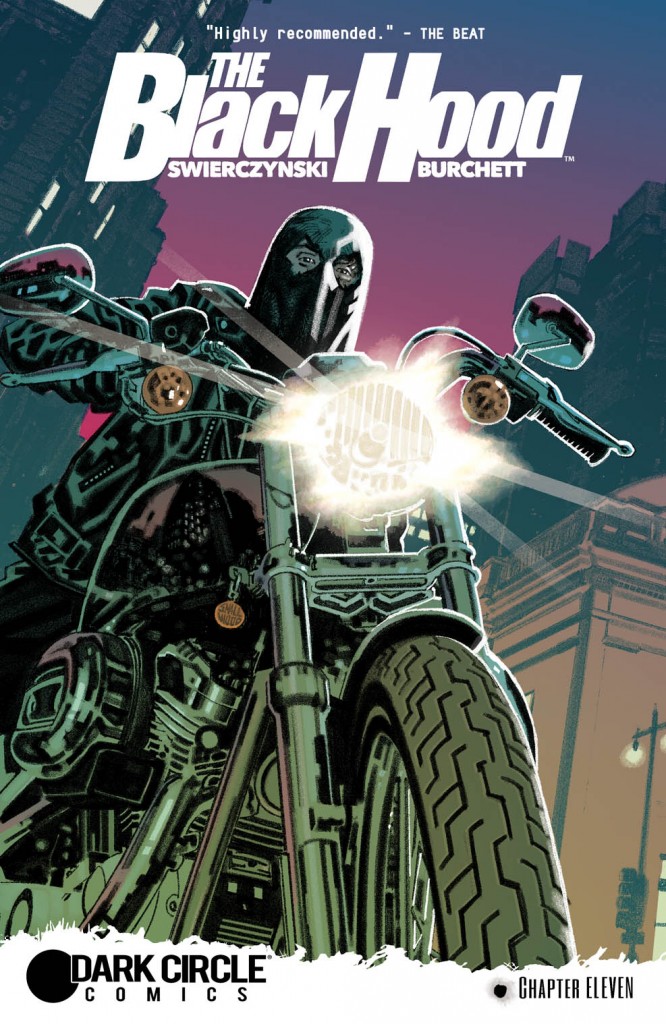 Cover A by Greg Smallwood 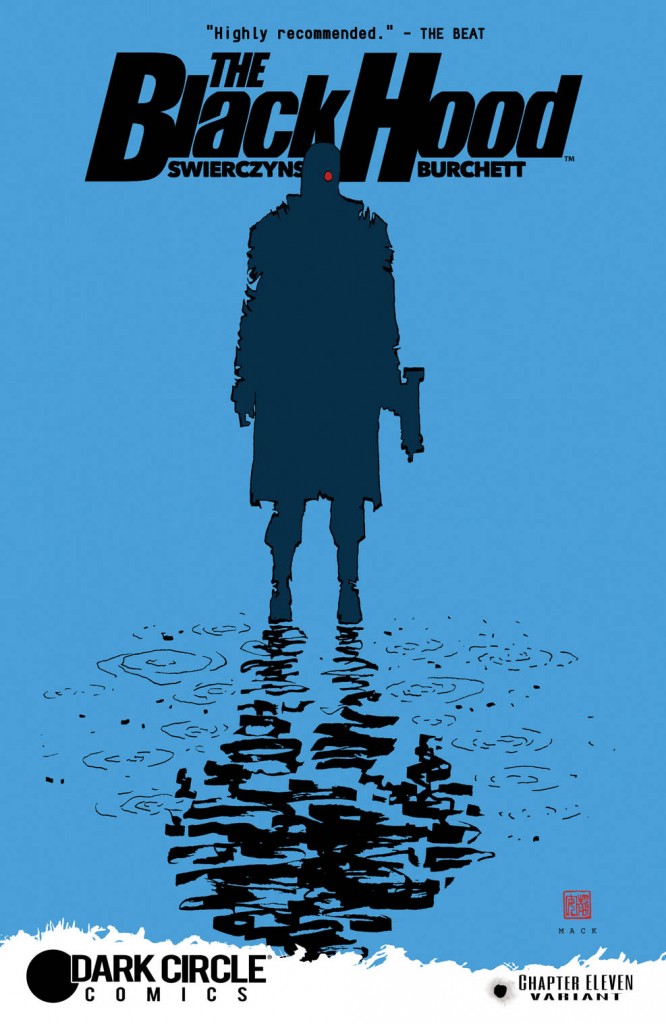 Before the cataclysmic events of “Bullet’s Kiss” and “The Lonely Crusade,” there was another Black Hood—Kip Burland, a former police officer who vowed to fight the crimes that he couldn’t while wearing a badge. But what was he doing in Philadelphia the day he was accidentally shot and killed by Highway Patrolman Greg Hettinger? You’ll find out in this special flashback issue starring the Original Hood… and learn the shocking truth about what really happened that day. This is an essential one-shot you don’t want to miss, featuring art from classic Black Hood artist Rick Burchett!

Cover A by Drew Johnson 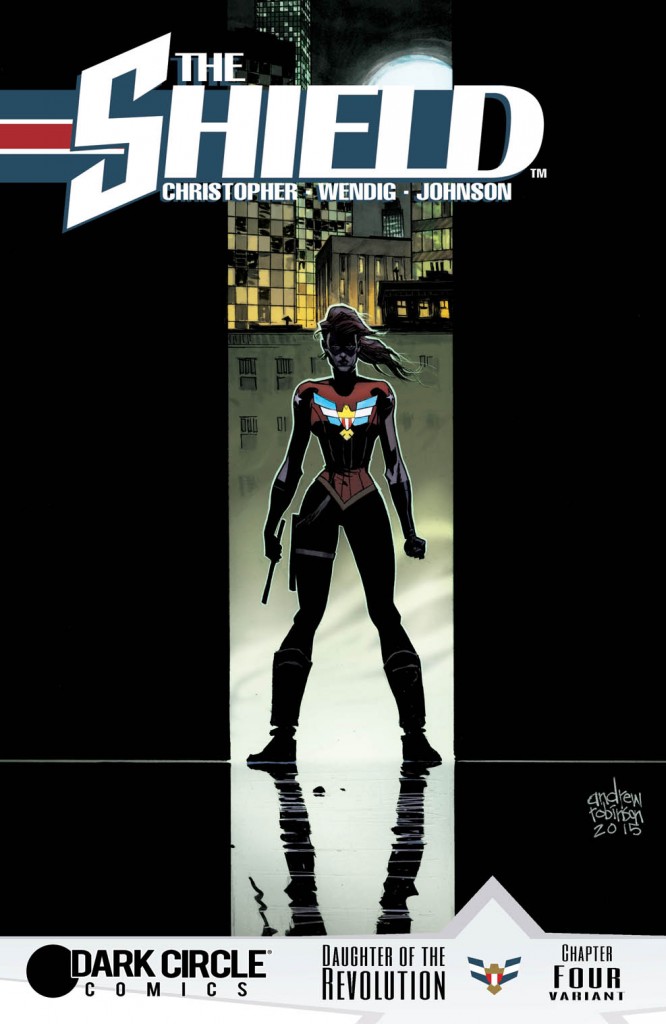 Cover B by Andrew Robinson

“Daughter of the Revolution, Part 4” She has served her country well, fighting for US interests the world over. But when the Shield’s next mission ends in tragedy on American soil—a tragedy televised live to every home in the country—the true nature of Black Seven is revealed as the superhero the world has been waiting generations for becomes… Public Enemy Number 1! 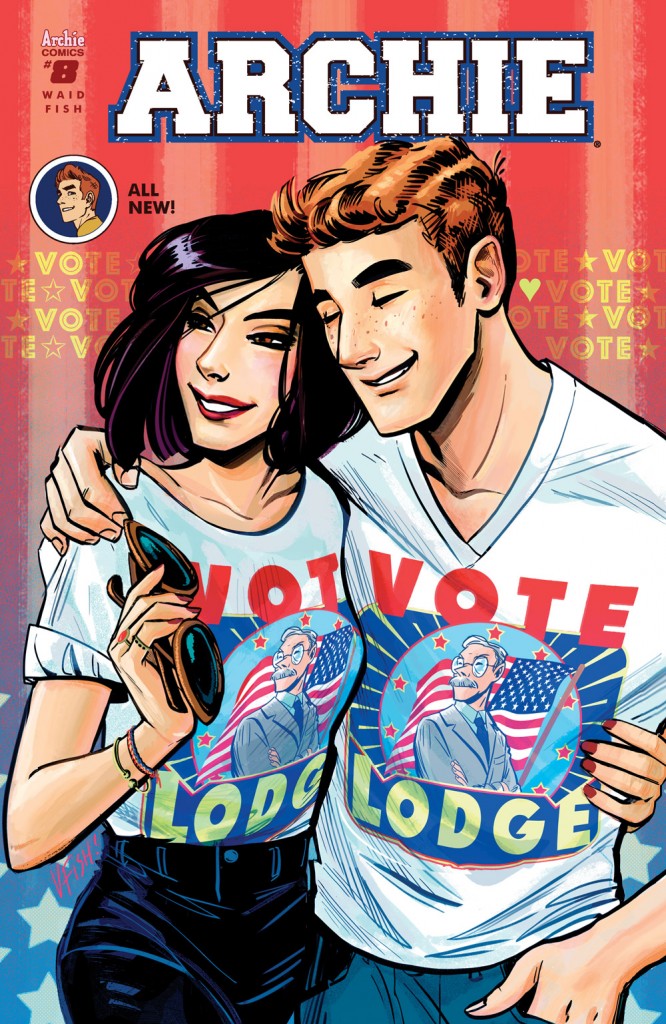 Cover A by Veronica Fish 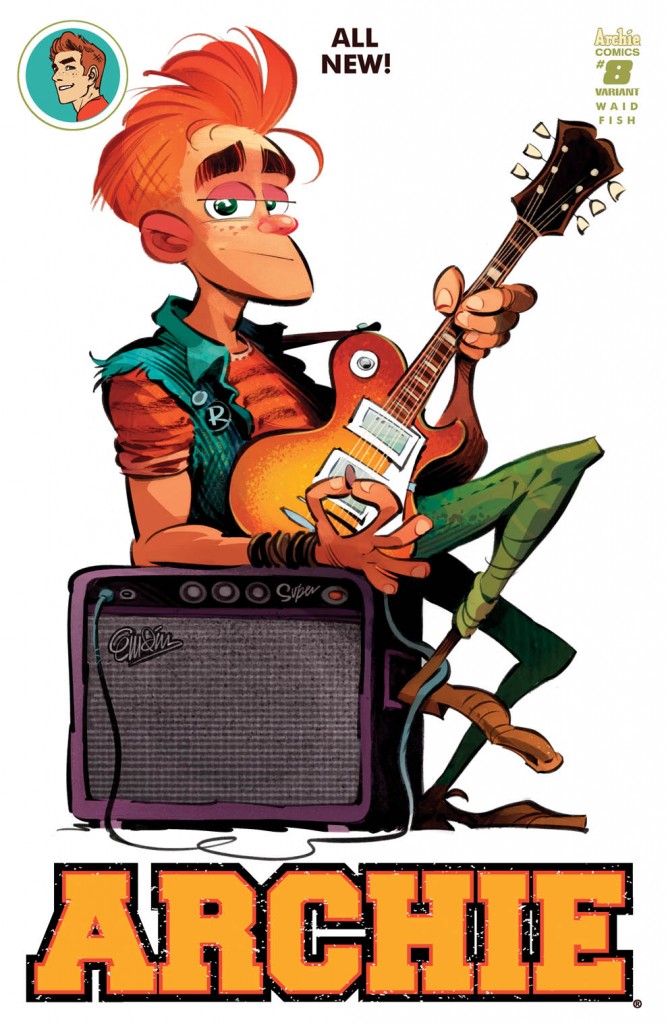 Cover B by Anton Emdin 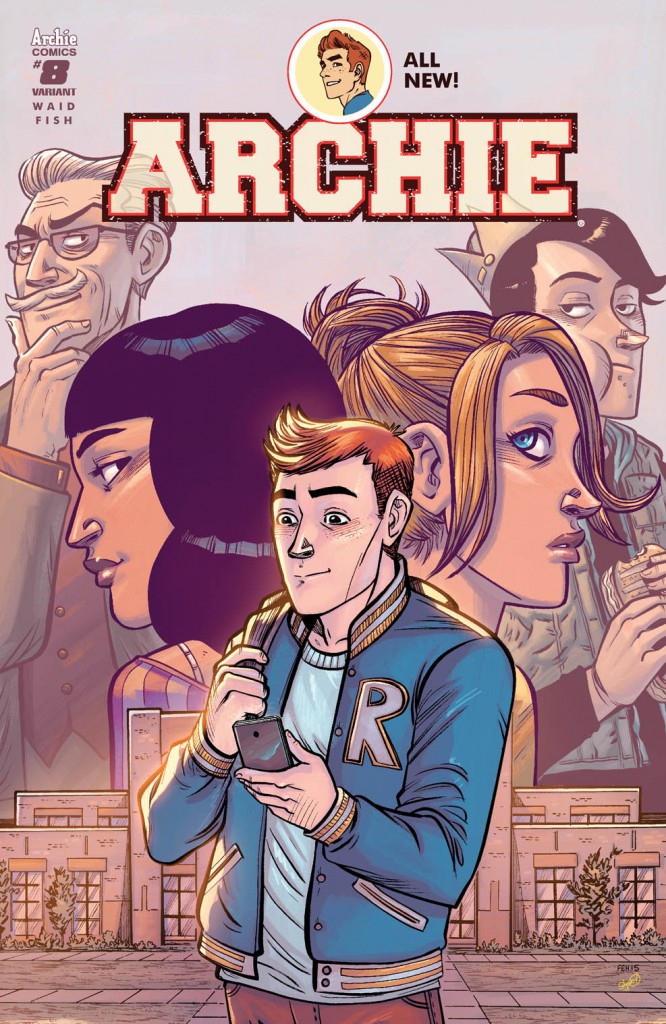 
Veronica’s father (and Archie’s arch-nemesis!), Hiram Lodge, is running for Mayor of Riverdale! But will he save, and even improve the town—or will he destroy it?​ Find out in this next installment of the hottest comic of the year! 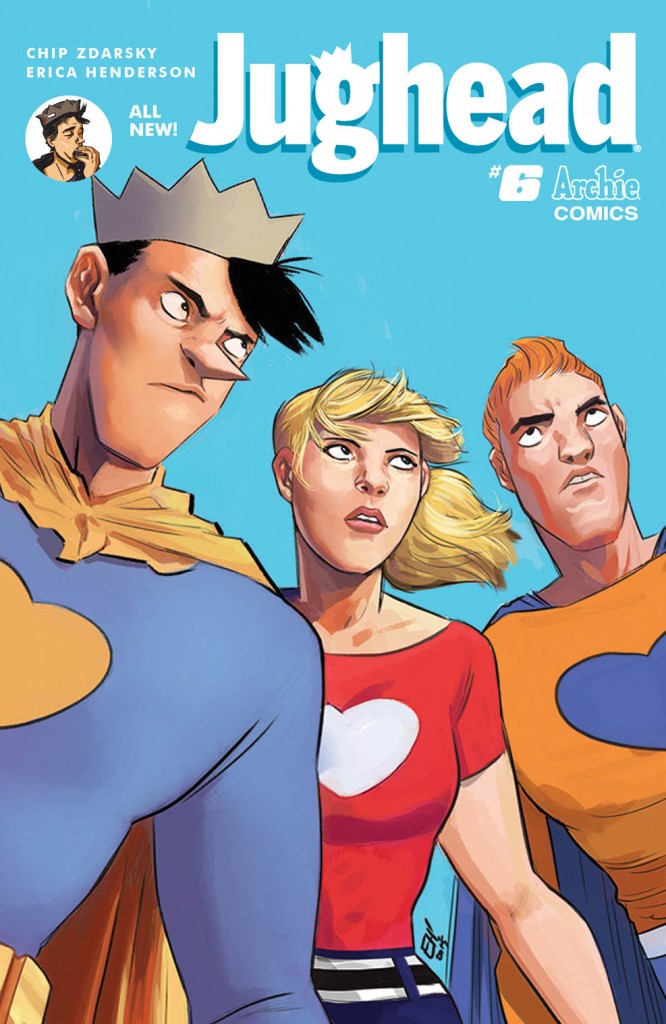 Cover A by Erica Henderson 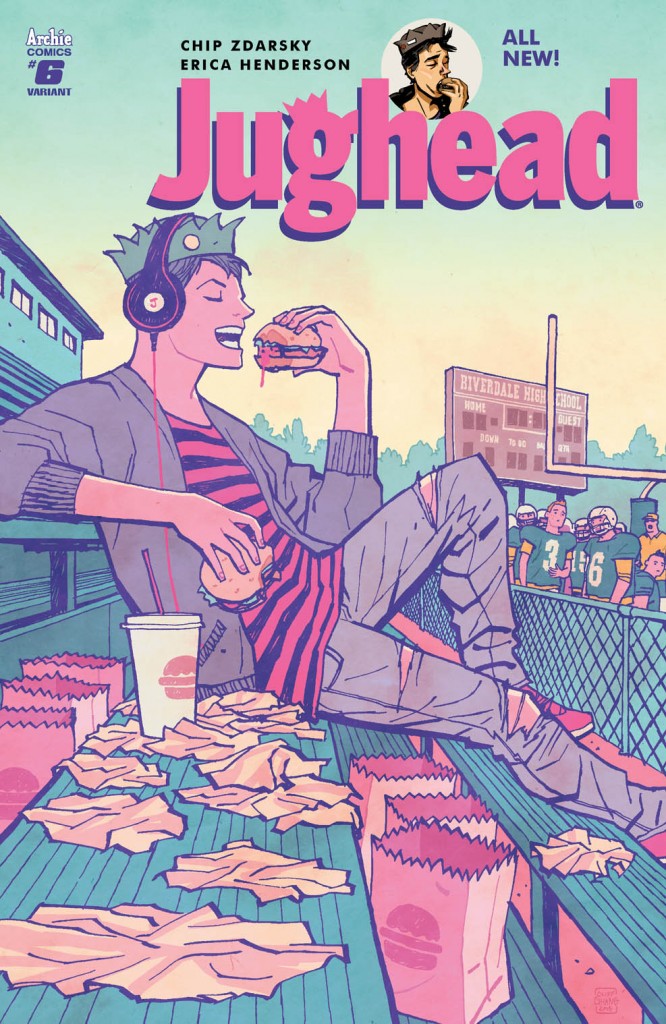 Cover B by Cliff Chiang 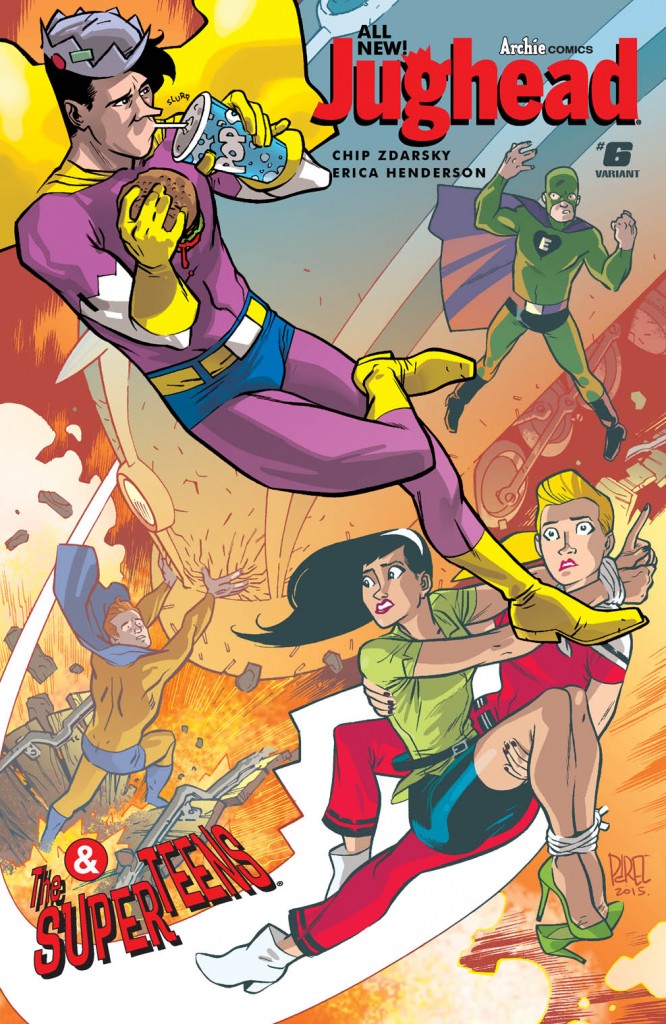 The time has come. It’s JUGHEAD VS. PRINCIPAL STANGER: THE FINAL SHOWDOWN! With the whole gang at his side, Jughead puts it all on the line: Either Stanger goes, or Jughead does! You won’t want to miss this! 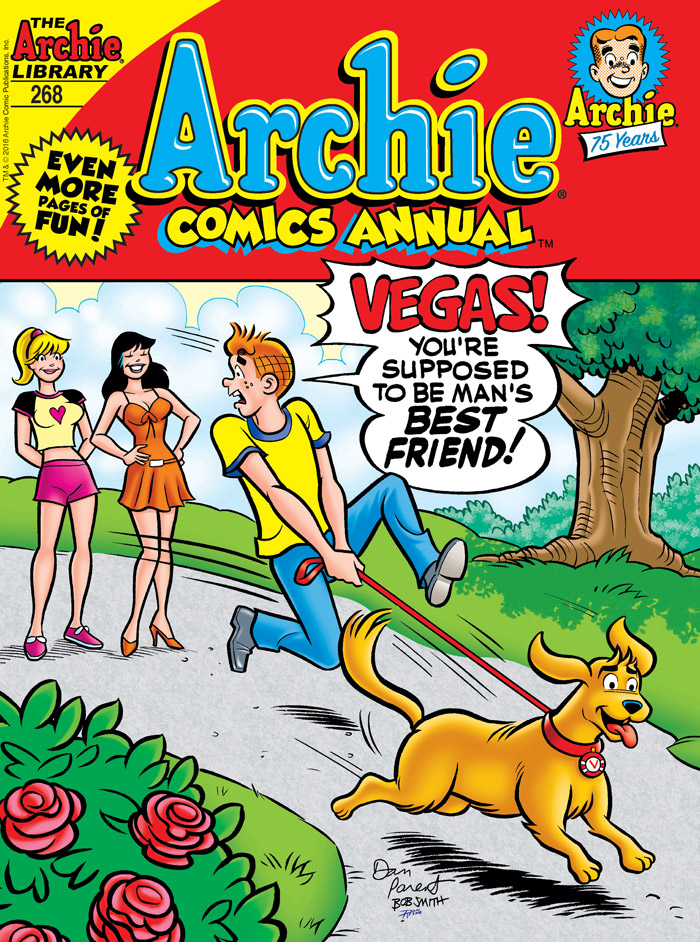 What was supposed to be a fun trip to a movie set ends up in a real-life crime caper! Will it be up to Archie, Jughead and Raj to save the day? Find out in “Go Figure,” the entertaining new lead story to this comics annual, featuring even more pages of fun! 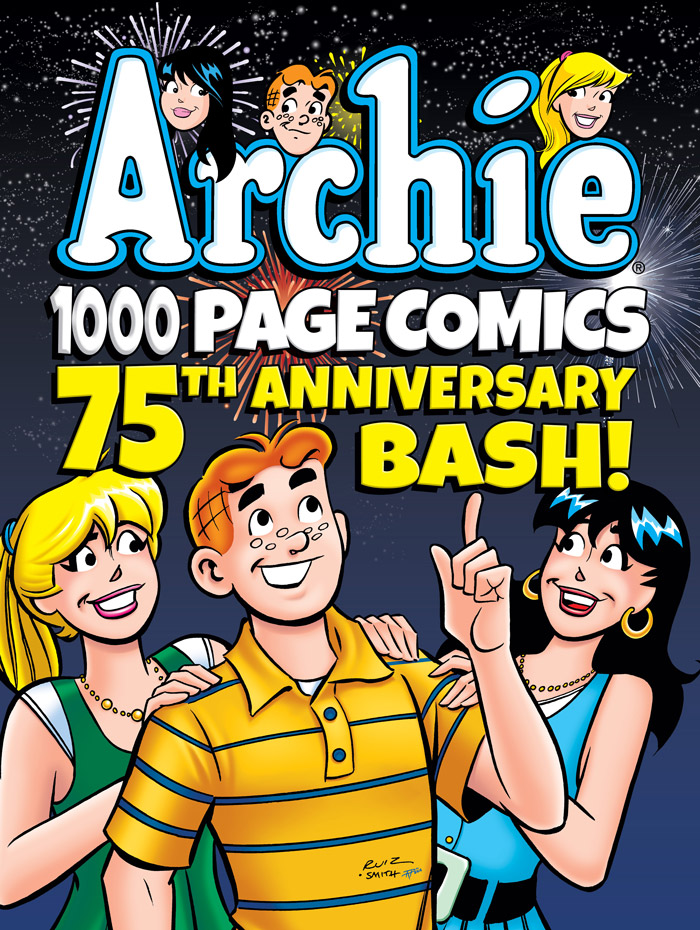 It’s the biggest celebration of the year! Archie, Jughead, Betty & Veronica are throwing a BASH to honor Archie’s 75th anniversary! In this edition of the ARCHIE 1000 PAGE COMICS series, get ready for hours of joy, laughter, amusement and crazy celebrations with Archie & his pals ‘n’ gals! For 75 years, Archie and his friends have been making everyone laugh and this collection will remind you of just what’s made Archie last for so long! Everything’s Archie in the largest Archie collection series EVER—offered at an incredible value price! 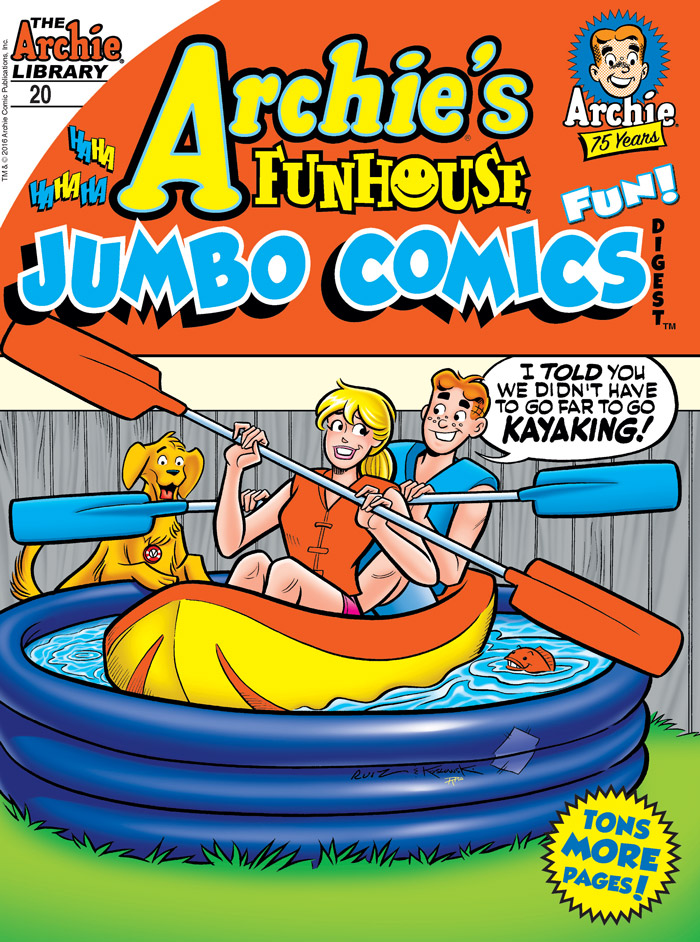 A rollerblading double date threatens to embarrass Archie in front of both Betty and Veronica! Can he learn how to blade in just a few days time in order to keep the date going smoothly and maintain his cool image? Or will Reggie be determined to skate him out of the ring… and into the hospital? Find out in “Cheat Skate,” the fun new lead story to this JUMBO-sized comics digest. 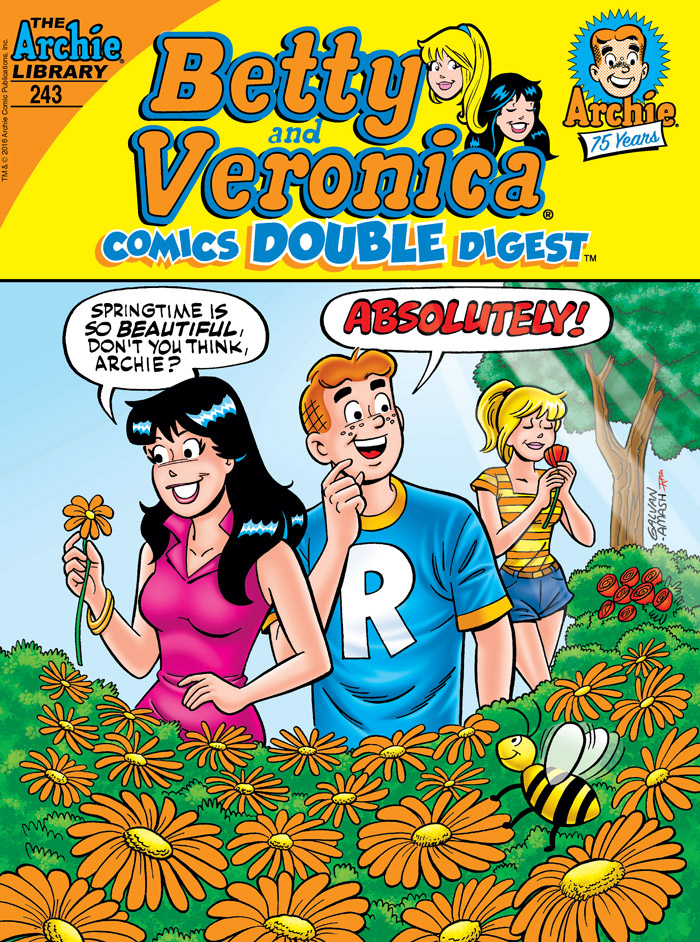 The Many Loves of Archie Andrews continues on in this next fun installment! Archie’s date with Ginger goes awry when her beloved cat Cinnamon gets sick. Exhausted from taking care of her cat, Archie lets Ginger rest while he takes over. Unfortunately, Cinnamon’s not as a big of a fan of Archie as her owner is! See if the claws will come out in “Don’t Make Ginger Snap!” the fun new lead story to this comics double digest! 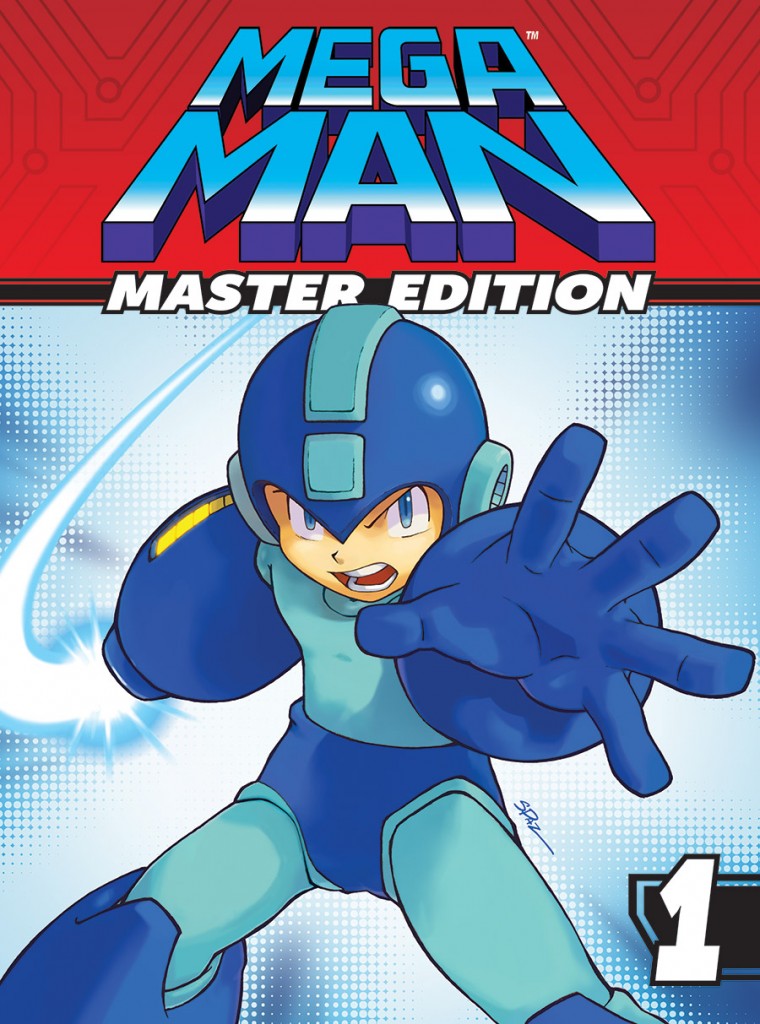 Mega Man is the legendary Blue Bomber-the boy robot turned hero! One of video game’s first icons, he’s now one of comic books’ greatest heroes! It all began when the nefarious Dr. Wily stole Dr. Light’s eight Robot Masters and turned them against the world! Helper-bot Rock had himself turned into Mega Man—the super fighting robot-to save the day! Dr. Wily wouldn’t go down without a fight, though, and built eight combat-specific Robot Masters just to destroy Mega Man—from without or within! Now Mega Man must fight to save the world and himself! MEGA MAN: MASTER EDITION vol.1 collects the first three epic storylines, covering Mega Man #1-12. 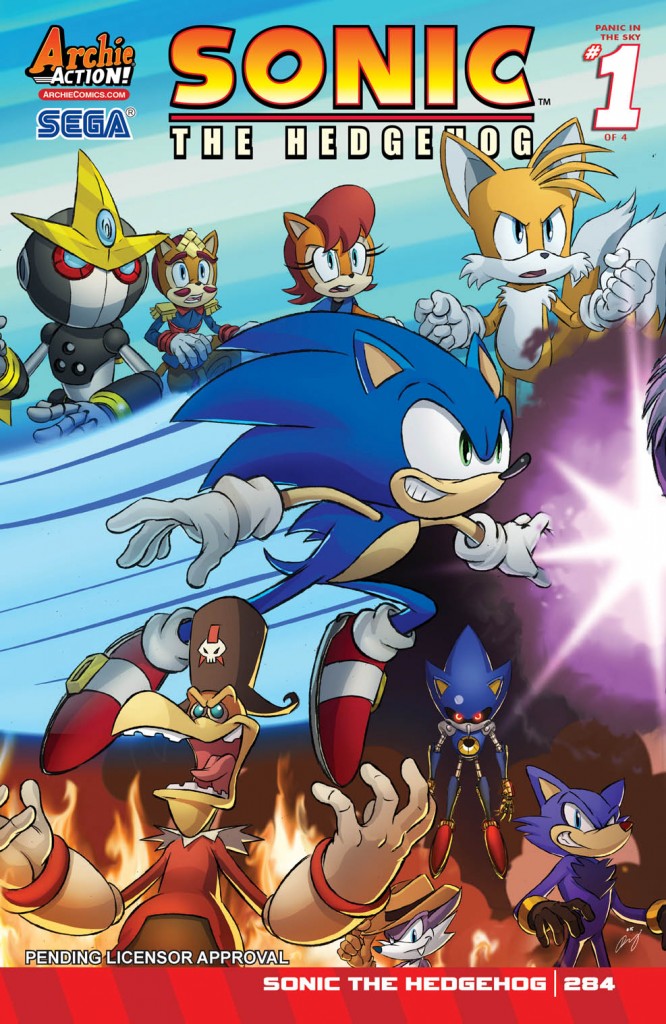 Cover A by Dan Schoening and Luis Antonio

Cover B by Lamar Well, Rick Bryant, and Matt Herms

SONIC and friends get into some BIG TROUBLE in “Panic in the Sky” Part One: Sonic’s Freedom Fighters are finally ready to restore the planet! Unless, of course, someone does even more damage! Cue: the evil Dr. Eggman (of course)! He has a plan of his own and strikes first! The mad doctor launches a multi-pronged assault that will leave you speechless-everything has been building up to this moment! The final chapter to the Shatter World Saga begins here! Featuring the first of four EPIC connecting covers by mega-talent Dan Schoening and an “Evil Win” variant by the wonderful Lamar Wells! 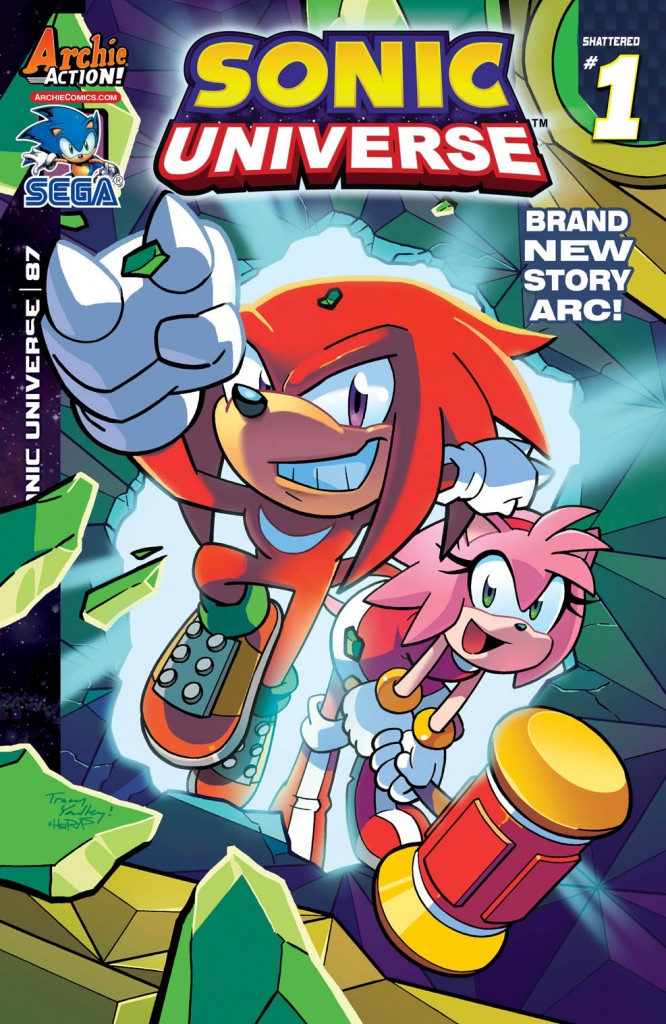 Cover A by Tracy Yadley and Matt Herms 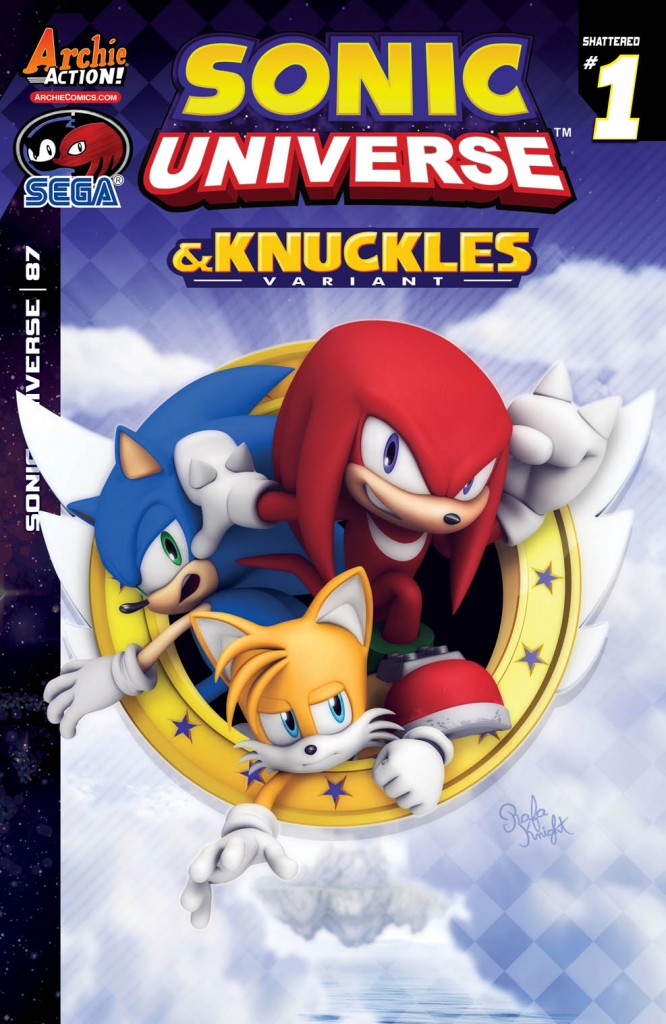 Cover B by Rafa Knight

Knock knock, it’s KNUCKLES in “Shattered” Part One: A brand new adventure starring Knuckles and Amy Rose begins here! It’s a race against time to find the final Master Emerald shards before Sonic restores the shattered world! The final installment of Knuckles’s search, filled with dangers and mysteries, starts with this issue! Featuring cover art by the terrific Tracy Yardley plus an “& Knuckles” variant by CG artist supreme Rafa Knight! 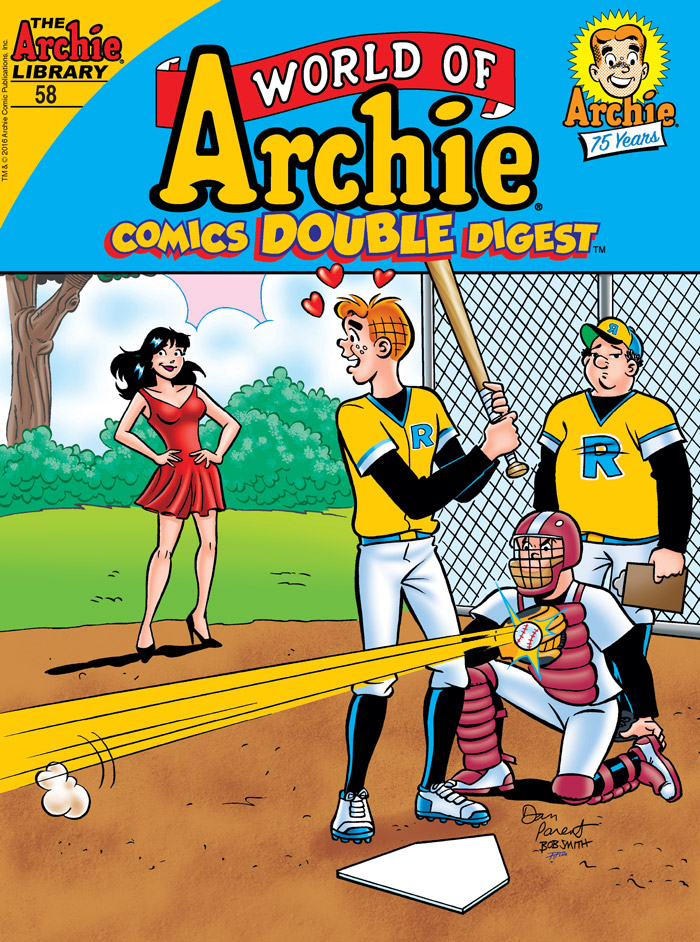 When Betty and Veronica learn that Archie and his father have gone fishing and left poor Mary Andrews to deal with a mountain of chores, they decide she deserves a little vacation too! And the girls quickly discover that this overworked Mom has more moxie than they realized! The big question is whether Archie and Fred will be able to handle what awaits them when they return home! Find out in “Thrills and Chills,” the entertaining new lead story to this comics double digest!