With the cancellation of Enterprise in 2005, the Gene Roddenberry era of Star Trek effectively came to an end. Yeah, Gene had passed away in 1991 but Rick Berman assumed the mantle for Gene determining how the Star Trek universe would appear in its forms. Despite Enterprise turning into a pretty decent show near its end, the market had become oversaturated with Star Trek and as the old saying goes, “Too much of anything is not always good for you.” So Star Trek too received a much needed rest.

It was four years later that Star Trek was brought back to life by JJ Abrams. At this point, JJ had just come off the success of his first Mission: Impossible film and was riding high on the success of shows on television like Alias and of course Lost. The film in question was a hit with audiences but Trek fans had some issues. I will be the first to admit the film is far from perfect. One scene in particular, where Kirk is stranded on an ice planet and just happens to run into the original version of Spock is just too convenient. It was lazy writing. What the film did right for me was the time travel aspect of the story. Other than doing an outright reboot of the story that would have done nothing more than piss a lot of people off, they pulled the old Back to the Future 2 trick of introducing an alternate timeline. The Star Trek we all grew up with was not erased with the new films (and new show coming on in 2017!). It’s still there in an alternate universe. These films were a way for Paramount to reset everything while still acknowledging the past we know still exists. For that, I as a fan am grateful. It could have been a whole lot worse.

Coinciding with the new films IDW comics brought us more adventures of the crew introduced in the movies. We’re eleven volumes into the series the comic is telling. One issue I had with the first few collected volumes of Star Trek comics was the fact that the writers involved wanted to focus the stories on different takes of episodes that were established in the original series of Star Trek. That is fine and everything but the problem was the stories ended up becoming pretty much a straight rehash of the original stories. I understand that these stories are told in an alternate universe and everything but knowing that the slate is wiped clean and the past as we knew it was different there was a real chance for the comics to take the crew to different places and interact with known characters in different ways. 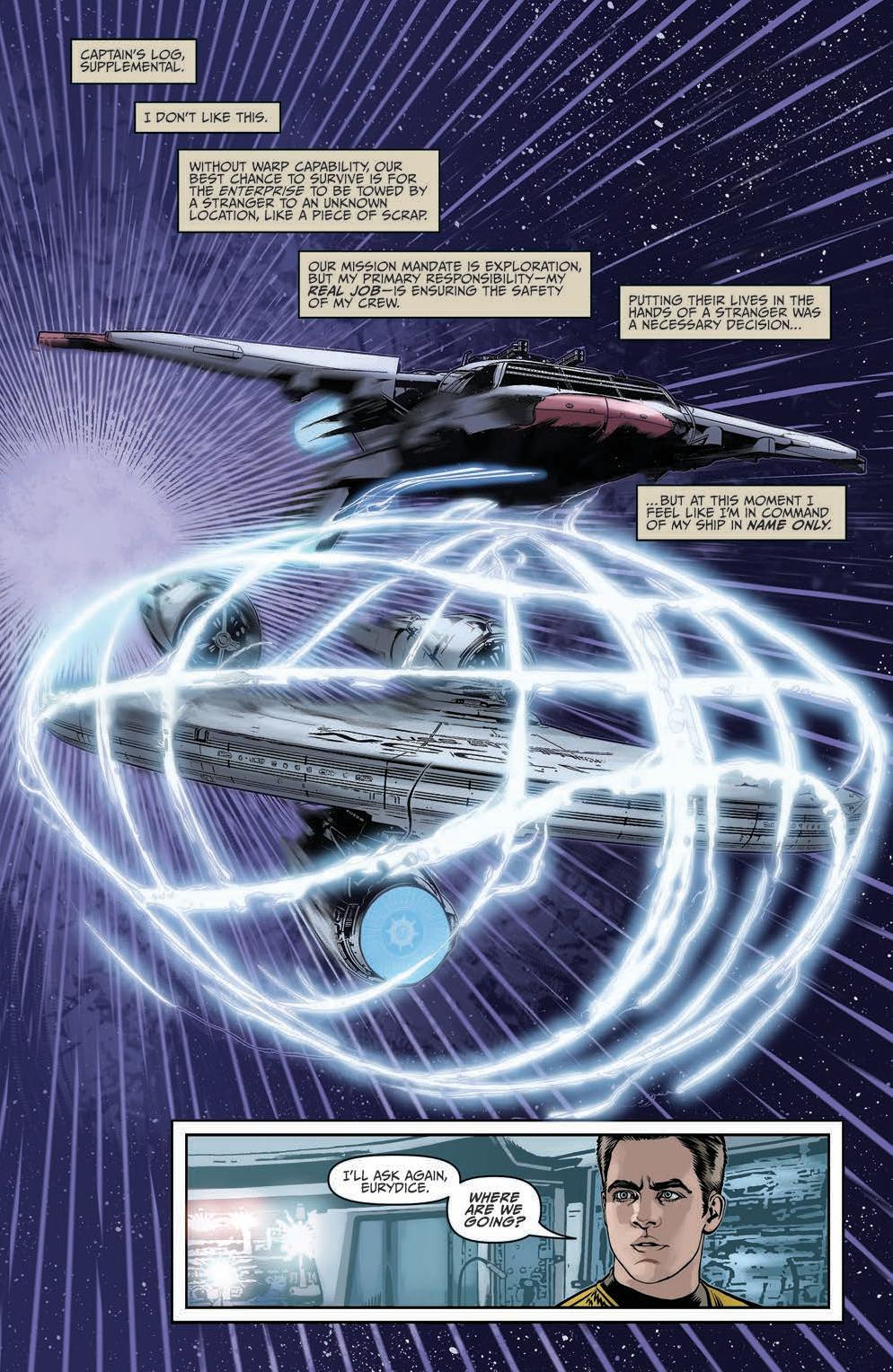 I am glad to say that with [easyazon_link identifier=”1631403818″ locale=”US” tag=”bounintocomi-20″]Star Trek, Vol. 10 TPB[/easyazon_link], things are getting a bit more original. The two stories told in this collection involve the Enterprise encountering a new creature warning them of a creature named Behemoth. While this story is pretty much original, this one does feel cribbed from a couple different Star Trek stories, one from the original series and one from The Next Generation. The battle with Behemoth comes across as an updated version of the story told in “The Doomsday Machine” (One of the best episodes from the original series in my opinion. It was good enough for John Williams to lift the score for Jaws). A giant creature is attacking planets, destroying them for its power. The Enterprise is outmatched but finds a way to ultimately stop the creature. The second part of the first story takes the premise of The Next Generation episode “Q Who?” (another great episode that introduces the Enterprise D’s [the ship featured in Star Trek: The Next Generation] best adversaries The Borg.) where Q sends the Enterprise D into the Delta Quadrant. Well, the original Enterprise finds itself in the Delta quadrant after defeating Behemoth.

These are fun stories, but the fact that with a quick five second search on Google I can find that these stories are still cribbed from some other existing Star Trek story is disappointing. I would have preferred the comics be a little more original when it comes to the stories they tell, not essentially rehash stories we already know as fans. Again, it doesn’t make them bad stories and if your introduction to the Star Trek universe was the new movies, these stories will be fine. Long time fans will end up more frustrated than anything else because you’re coming to the comics with the expectation of something a little more original than what we’re getting.

The second story picks up where the first left off. Thankfully, this is a little more original yet suffers from being pretty cliché. After being stranded in the Delta Quadrant and having no Dilithium Crystals to use for Warp power to get back home, it’s going to take them a long time to get back home on impulse power unless they get help. That help comes in the form of a smuggler name Eurydice. 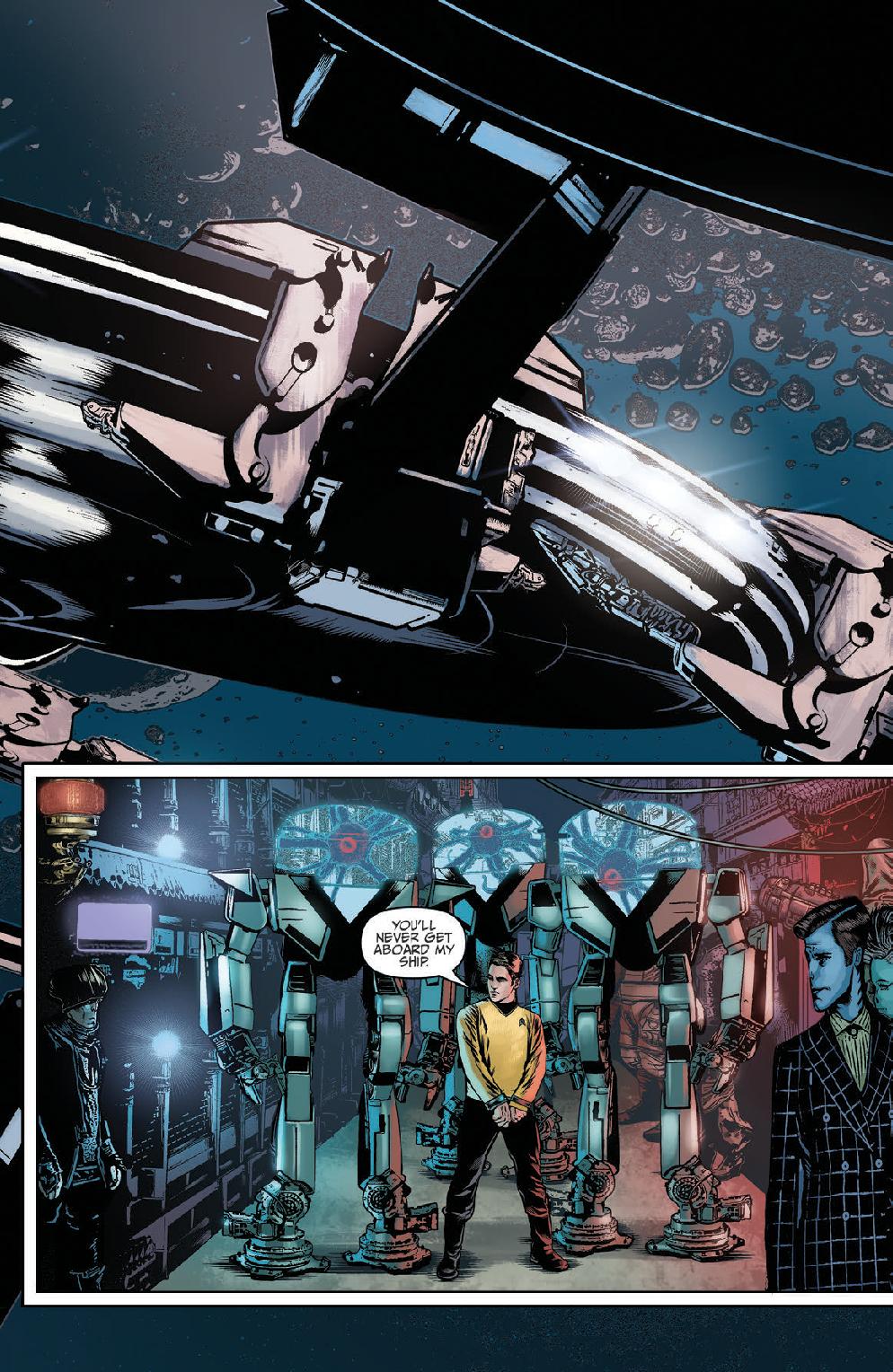 Within the first couple pages of her story one name came to mind: Lando Calrissian. The story is fine but anyone who has ever read any fiction since ever will know what is going to happen next in the story. It’s a paint by numbers story. That doesn’t make it bad but it does make it predictable which takes any sense of danger or urgency and tosses it out the window.

The art was all right, but I did have one issue with it. That had to do with the fact that the artists in question, Cat Staggs and Tony Shasteen, did a great job with character design, but I felt the backgrounds were not as critical to focus on. The locations were muddy and tough to determine what exactly they were trying to depict. There is an almost haze covering any location shot you see in the story which is frustrating. I get that it’s a comic. If I wanted an exact visual replica then I should just be satisfied with the movies. I do think more work could have been done detailing the locations where the stories take place.

There is much to critique in [easyazon_link identifier=”1631403818″ locale=”US” tag=”bounintocomi-20″]Star Trek, Vol. 10 TPB[/easyazon_link]. With that said, it’s still enjoyable. Being a Star Trek fan since I was a kid, I think my opinion of the comics is more jaded because I am knowledgeable on the universe these characters are playing in. New fans to the franchise can use the comics as a great gateway to the original series and movies and for that fact alone I recommend these comics. Sure, the art can be better but beggars can’t be choosers. Just know what you’re getting into when you pick up this volume.