After recounting his escape in the previous issue, The Spirit and his friends set off to discover who Mikado Vaas, the man who captured The Spirit, is. However, The Spirit has to mend his relationship with Ellen as new villains plot against him. How does it fare?

[easyazon_link identifier=”B018W46K54″ locale=”US” tag=”bounintocomi-20″]Will Eisner’s The Spirit #7[/easyazon_link] begins in similar fashion as the issues before it with some excellent drama followed by some engaging action sequences; however, the pace slows down quite a bit as Matt Wagner ties up some loose ends with character relationships and begins laying the groundwork for another detective adventure.

The opening sequence has some great moments that show the chemistry between Matt Wagner and artist Dan Schkade. I was spitting out my hot chocolate laughing as Sammy and Ebony jumped into the fray, calling the mobsters “Boneheads.” It was simplistic but got the job done. The chemistry continues after the fight characterizing the mysterious and elusive Mikado Vaas without even having him appear on the page. The panicked and nervous dialogue given from Larson E. Jones is seen in Schkade’s depiction of his sweating face and bulging eyes. It gives you a sense that this guy is someone you don’t want to mess with. He is the worst of the worst when it comes to villains. 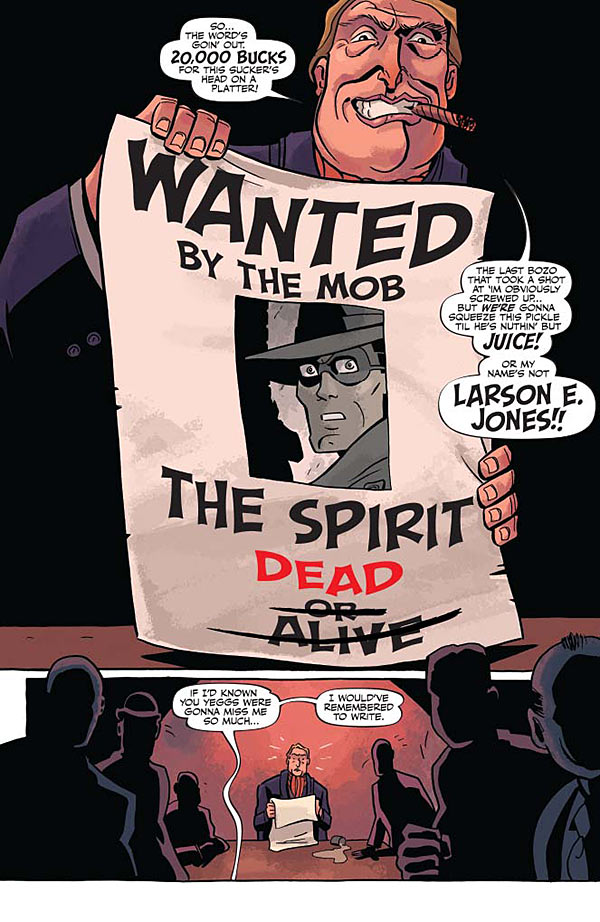 Transitioning to the next scene, Wagner finally decides to confront the problem that is Ellen and The Spirit’s relationship. It was a bit of a letdown as he seems to resolve their problems and difficulties way too easily. It fits into the nostalgia of the era, but I would have liked to have seen them struggle more in reaching their outcome. It just fell flat and seemed contrived to me the way Wagner wrote it.

Wagner still dials up the humor quite a bit in this episode and even ends the meeting with Ellen and The Spirit with some humor. In addition, the subsequent scene is quite hilarious especially if you imagine Ebony talking at a somewhat rapid pace. Combine this with Schkade’s artwork depicting the dock worker’s realization of what just happened and you have some great humor. Again, their chemistry together is so good. 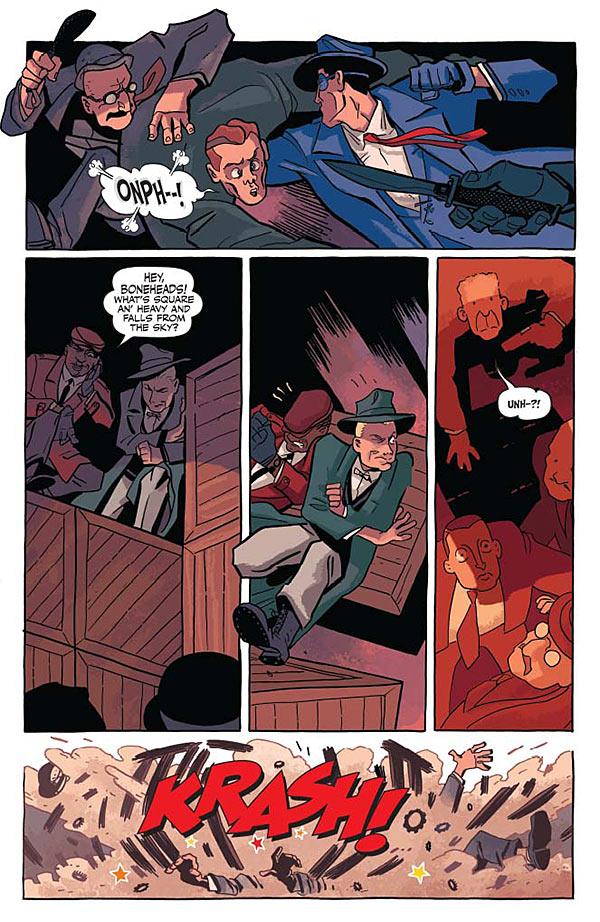 There are some art flow issues. For example during a combat scene, The Spirit is whacked on the head from behind, but the next panel has him shoving his elbow into his attacker’s neck. It’s a bit of a stretch to make the leap from being blindsided to winning a struggle. A similar issue occurs when he has a villain pinned down, but then all of a sudden the villain is running free. It doesn’t really make sense and forces you to suspend your disbelief a little too much.

Brennan Wagner’s colors were for the most part what we have come to expect. However, there were some panels where the colors felt more flat than normal. The Spirit’s blue coat didn’t pop off the page in some panels. He did do a great job with the Ellen sequence, providing an orange-reddish background to emphasize their tension and passion.

[easyazon_link identifier=”B018W46K54″ locale=”US” tag=”bounintocomi-20″]Will Eisner’s The Spirit #7[/easyazon_link] is good. It is definitely not as good as it has been. The resolution between Ellen and The Spirit is just too easy; there isn’t any conflict or difficulty. There are also some art mishaps that force you to suspend your disbelief a little more than necessary and some of the coloring feels flat. However, the story for the most part is solid, and Wagner’s dialogue is quite comical. If you’ve been enjoying this book as much as I have, you will enjoy this issue as well.