“The Vine Imperative” story arc comes to a close as Harada’s forces clash with the Vine plantings. Will Harada’s forces be able to defeat them as their leader is incapacitated? How does it fare?

[easyazon_link identifier=”B019ZUBVU8″ locale=”US” tag=”bounintocomi-20″]Imperium #12[/easyazon_link] concludes the “The Vine Imperative” in excellent fashion with an ending that will take you by surprise. Joshua Dysart begins the book in a rather odd fashion. It will leave you scratching your head, but by the end of the issue you recognize it for the brilliant foreshadowing that he creates.

The book continues Dysart’s tradition in previous arcs of really delving deep into the characters and showing us their different sides and just how complicated and complex they can be. He does this with both Tess Solomon and Lord Vine 99.

We get to see Tess Solomon’s transformation from the passionate and pro-active militant to a more reserved adult who has gained wisdom in her old age. Dysart brilliantly demonstrates this as Tess experiences a moment of pure grief, but is still strong enough to deal with LV-99’s rage-driven mission, offering an alternative to his violent actions. 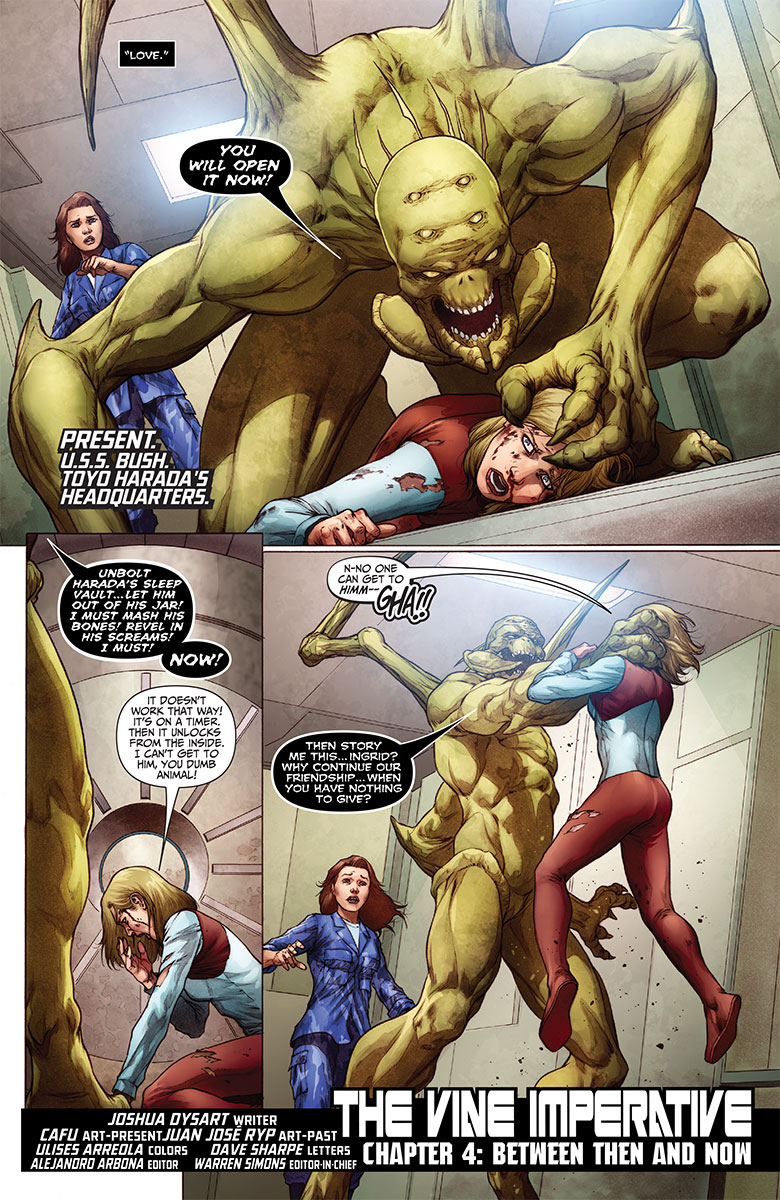 While the development of Tess’s character is interesting, it doesn’t compare to Dysart’s examination of LV-99. By now, we know he is completely full of rage, with one thing on his mind: the complete and utter destruction of Harada. However, Dysart takes us back into the past and explores a different aspect of LV-99 where, with the guidance of a Pure-Vine, he is able to re-examine his hate and purpose. The dialogue in this scene is absolutely fantastic, examining what it actually means to be sentient. While Dysart explores a completely different side of LV-99, he also incorporates a nice plot turn that binds LV-99 to Harada even more than they had previously been.

In addition to the character development, Dysart continues to subtly examine the political situation of the Valiant universe, pointing out the wrongness of fomenting war for profit. It’s such a small part of the plot you might miss it. There was one minor error where Dysart left out a word in his dialogue, but you are able to easily figure out what it is.

One thing that might bother a number of readers is how Dysart concludes the story. He doesn’t keep the story linear. Instead, he uses a narrative to describe the details of what happened with Cafu and Juan Jose Ryp providing flash panels to show the important parts of the battle or its results, excluding much of the actual combat. 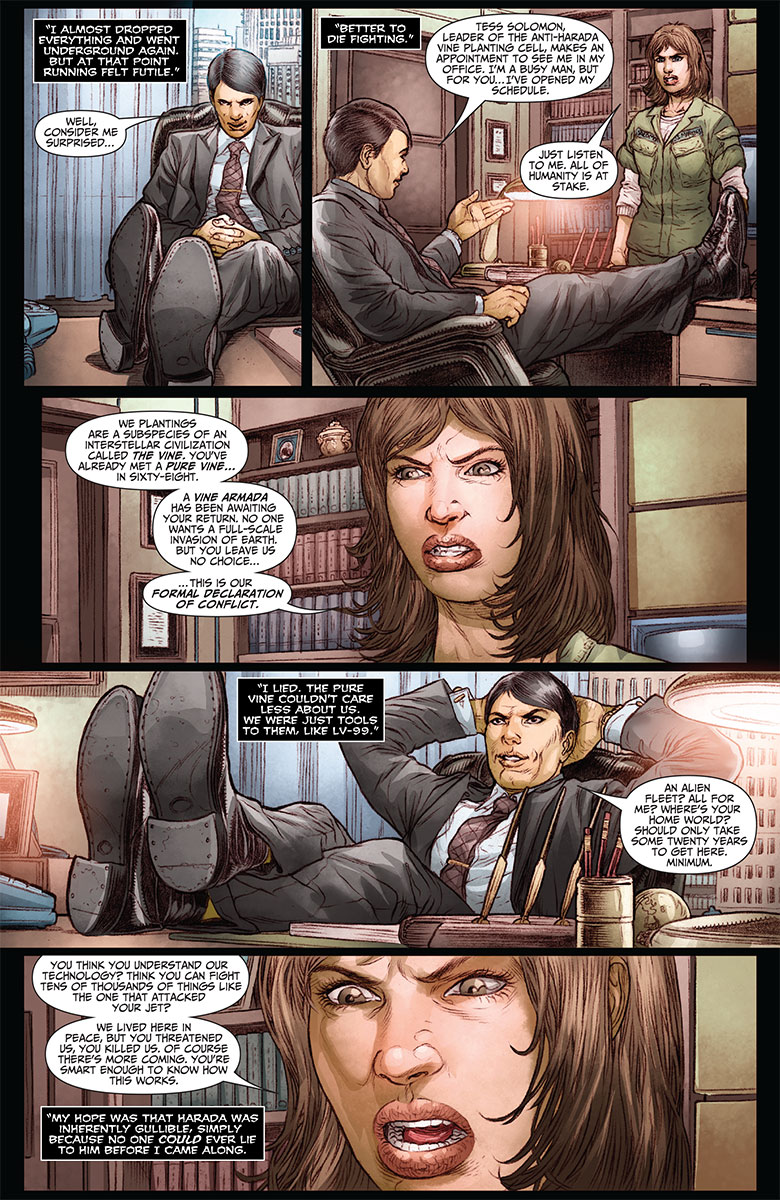 Cafu’s artwork is as good as ever. The first battle sequence gives a blow-by-blow narrative where you can see what is happening without Dysart’s dialogue. It is epic and personal all at the same time as he switches from depicting the overall battle to a more personal one between Gravedog and Sasha.

Cafu excels at depicting Tess Solomon’s facial features during her moment of grief and I really like how he keeps her tears on her face even when she is confronting LV-99. It just shows how wrought with emotion she is. You can feel her grief.

Juan Jose Ryp is also able to evoke emotions; however, instead of grief he captures the rage and turmoil swirling within LV-99 as well as the serenity and peace. He uses an iconic figure from one of those old Disney movies to punch you in the stomach and depict LV-99’s transformation. Those eyes, they just get to you. 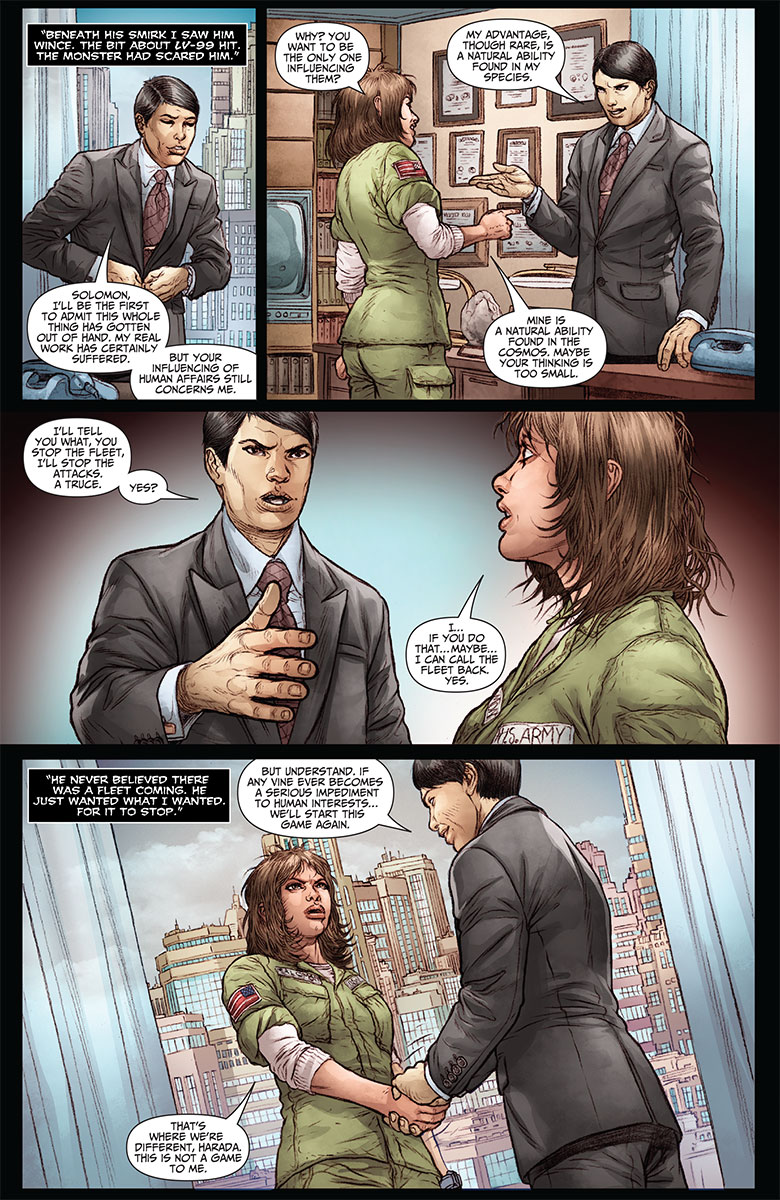 [easyazon_link identifier=”B019ZUBVU8″ locale=”US” tag=”bounintocomi-20″]Imperium #12[/easyazon_link] is a fantastic and surprising conclusion to “The Vine Imperative.” Dysart does an excellent job of delving into Tess Solomon’s and LV-99’s characters. The dialogue is exceptional with some extremely deep conversations with LV-99 and the Pure-Vine as well as the one between Tess and Harada at the end. The artwork is once again fabulous. This book continues to be a must read.