Judge Dredd finds himself in a strange world where he is completely out of place, but that doesn’t stop him from doing his job. How does it fare?

[easyazon_link identifier=”B01AGWP03S” locale=”US” tag=”bounintocomi-20″]Judge Dredd #2[/easyazon_link] is not what I was expecting from a Judge Dredd title. It is something radically different. I would argue it is actually a parody of Judge Dredd and, more importantly, Western internet culture.

Writers Ulises Farinas and Erick Freitas begin the story with Judge Dredd entering Ang Avi, a radically different version of the Angela Davis Block of Mega-City One. They do some good world building through the dialogue, detailing how the society in Ang-Avi works which is an exaggerated version of an internet forum full of trogs (trolls), sys-ops (moderators), and even terms of service. They even turn Dredd into a viral meme.

It also examines the dangers of a pure democracy with mob rule forming lynch mobs and kicking people off cliffs, having them fall to their demise. This world does not sit well with Judge Dredd at all and he pushes back against it throughout the book, trying to instill his sense of order and justice. However, his new found ally questions Dredd’s own moral stance and problem solving techniques. 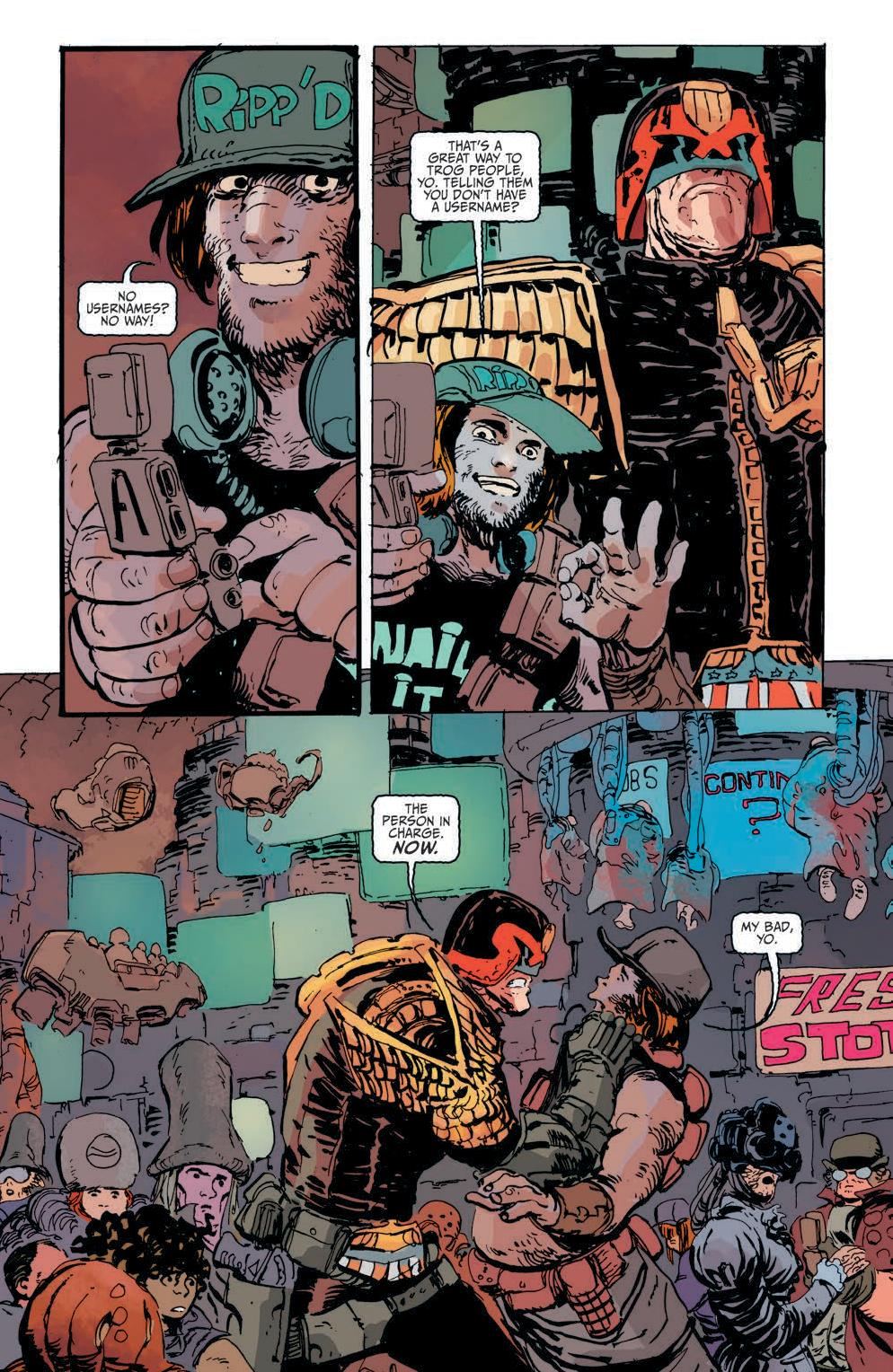 Unfortunately, due to the nature of the story, it reads a lot like a Facebook political post or a YouTube comments section with Dredd insisting the ideas of this society are wrong. This inflames the individual he is talking to and, when he eventually sees Dredd take action backing up his stance, his ally ironically turns against Dredd and his own advice with regards to violence. They pretty much took a YouTube comments section and put it into a Judge Dredd comic. It’s infuriating to read, but definitely gets its point across by holding up a mirror to internet culture.

The one thing they do very well is Dredd. His reactions to situations are spot on and even his responses fit the hardened Judge. Despite being in a strange world with radically different notions of how the society is run, he still sticks to his guns.

Artist Dan McDaid’s artwork has a very rough, grizzly quality to it. It captures the wrongness of the society and world in which Dredd finds himself. However, many of the panels feel a little too busy. There can be tons of things happening or just an overload of imagery in some of the panels that it can overwhelm you. This made it a little hard to follow or figure out what was happening in certain key plot points such as when Dredd’s three young prisoners decided to make a break for it. 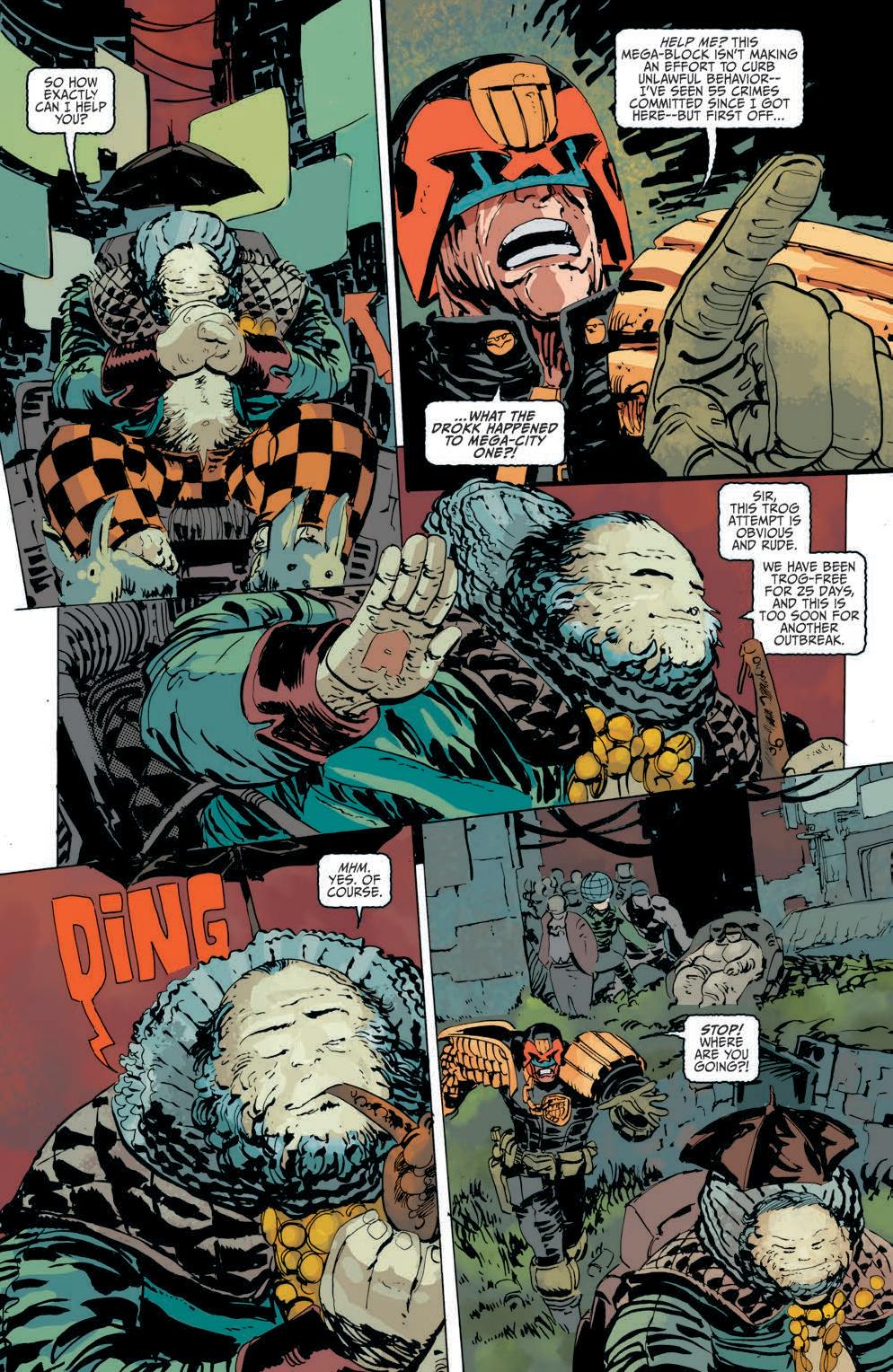 There were also some issues with action shots. There is one scene where Dredd headshots an individual; McDaid decides to put a red blotch in place of the head. It just looks bad and, to make matters worse, he adds a gray stream of smoke, but the impact doesn’t look like it should be smoking.

I did like his character design for the Trog; it very much resembles what I would imagine a Trog would look like. It was very reminiscent of a Dragon Ball Z Saiyan gorilla, but a tad uglier. Not only was the form of the Trog pretty awesome, but I really liked how he depicted the transformation and how painful and graphic it appeared. Finally, the way he depicted the Trog in different stances really captured the baseness and ultimate stupidity of the creature.

[easyazon_link identifier=”B01AGWP03S” locale=”US” tag=”bounintocomi-20″]Judge Dredd #2[/easyazon_link] is a radically different take on Judge Dredd. It addresses modern internet culture with dialogue that appears to be heavily influenced from the comments section of YouTube. The art had some really good points, but also struggled with cluttered panels. They do nail the character of Dredd very well, but I’m not sold on this new world.