Nowhere Men is back, but with a new artist as Dave Taylor has replaced Nate Bellagarde.Taylor is best known for his work on Judge Dredd and Force Works, which was an offshoot of the West Coast Avengers. Taylor does his best Bellegarde but it doesn’t quite add up to Bellegarde’s previous efforts. However, he is perhaps the most notable part of issue #7 and for good reason.

For sake of back-story, I received [easyazon_link identifier=”1607066912″ locale=”US” tag=”bounintocomi-20″]Nowhere Men Volume 1: Fates Worse than Death[/easyazon_link] (November 2013) in the mail from a friend. It came alongside a few other Image comics but was probably among the most detailed, intense and visually stunning of the batch. The way Bellegarde studiously captured people’s faces, their eyes, and their expression was incredible. And Stephenson’s world-building is the best bar none. But even with that world-building intact, Bellegarde leaving this comic was nothing short of a tragedy.

It isn’t that Taylor’s efforts are bad the artwork is certainly passable and even quite striking at a few moments. But overall it just feels like someone tried on Bellegarde’s inking/penciling duties and awkwardly walked around a bit and only got themselves comfortable along the way. Don’t get me wrong, it gets better as you go along, but Bellegarde’s art is missed.

It is also notable, that the last issue of Nowhere Men was released back in October of 2013. Which means that if Stephenson and company want to keep the readers as gripped as they likely were before, then it ‘s a good idea to both move backwards and forwards with the plot.

But insofar as that is concerned Stephenson doesn’t really seem interested. He gives some minor refresher details, a few things that happened in the previous volume here and there. Sadly, the back-story that seems necessary to fill people in on what exactly Nowhere Men is about, seems amiss.

You can get some of the details from the issue:

Aside from that, you should probably read volume one to have a better picture of where the story currently stands. 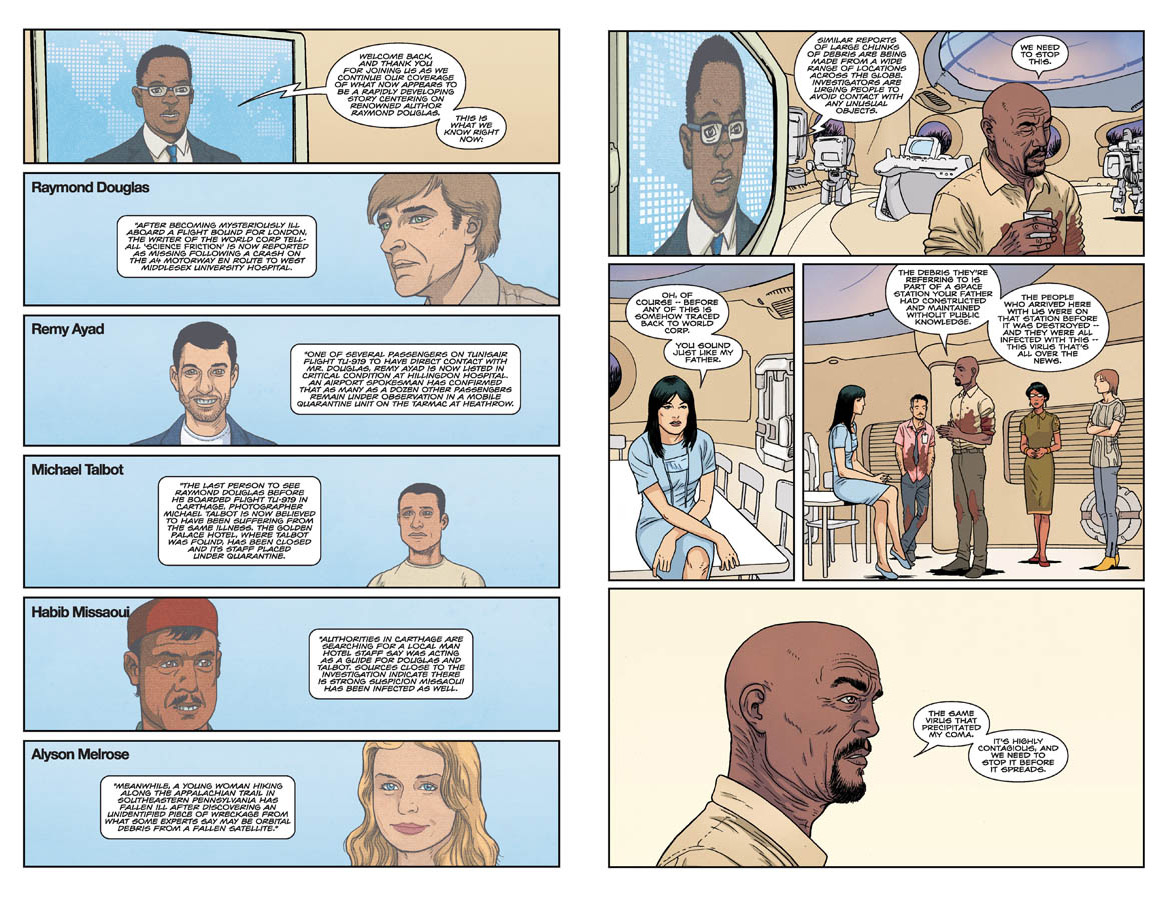 The issue starts with a child named Monica who laments about living in the shadow of her father. Even though she’s her own person, Stephenson shows how easy it is for us to be judged by others actions. But it’s also highlighted that Monica isn’t blind to this fact and takes that into account. We therefore see Monica as a fairly well balanced character when we slip back into the present.

While Monica and her father, Emerson Strange, share a moment together, Dade Ellis decides to interview the remaining test subjects of a recent experiment gone wrong.It’s a small and quick way of re-introducing us to the characters, their abilities and their concerns.

Daniel, Kurt and Adra are all in one room discussing how they feel about Emerson, Ellis and Simon Grimshaw, three of the founders of World Corp. Via their latest experiment they’ve all been involuntarily changed in certain ways.

Daniel, et. al. can be seen as a reflection of the moral ambiguity that the reader also has of the World Corp. founders. While Emerson and Ellis certainly have good intentions, their corporation has, in the end, done a lot of harm to a lot of people; possibly in irreversible ways.

And while Ellis comes into help ease each of the test subjects uncertainty, it’s unclear whether he succeeds. This aids in the atmosphere of distrust that could be quickly heightened given the right circumstances.

Jackson and Karen discuss their anxiety around the condition of Susan, who has transformed into a black liquid and is currently in a containment unit. Kurt gives Ellis advice to uses his own mental powers to try to get into Susan’s head. The results of this are some incredible visuals on Taylor’s part as he weaves his own distinct style into the issue.

Stephenson hasn’t lost his touch either; he still retains the solid characterization that was with the characters before. Seeing these characters on the page again and their interactions reminded me of why I enjoyed the comic. The mix of science-fiction with corporate politics, celebrity status vs. regular people remains ever present and influential in Nowhere Men’s presentation. Those are many of the things that made Nowhere Men so intriguing to begin with so to see their return is welcomed. Really, it’s just great to have [easyazon_link identifier=”B01AGS3YFI” locale=”US” tag=”bounintocomi-20″]Nowhere Men[/easyazon_link] back. 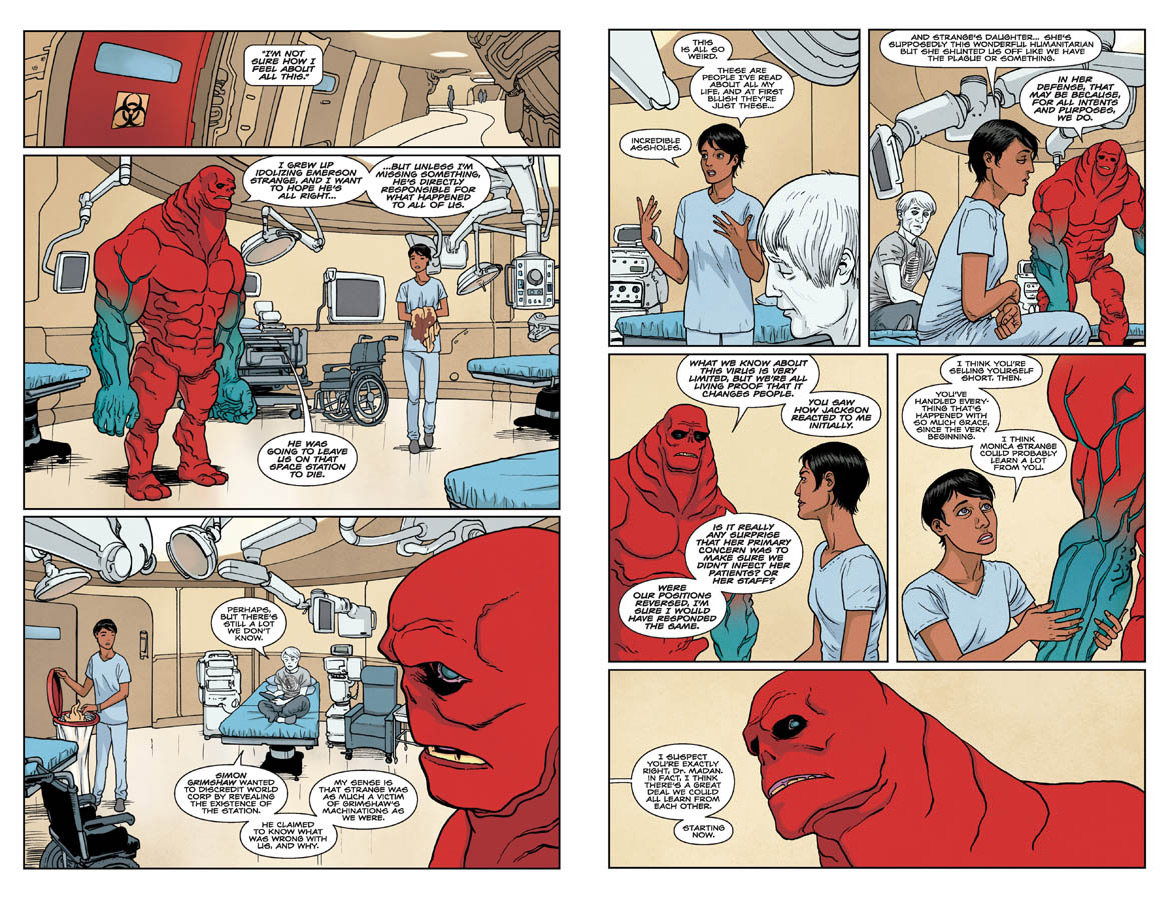 Although the art isn’t as affecting as it was before, it’s still good and definitely visually striking at times. This is particularly the case when we get close up to the characters and really look at their faces. The opening flashback of Taylor’s inking is also splendid and the flashback scenes from Monica’s childhood were entertaining and fun.

Stephenson is the real joy here though.He’s able to do a capable and bare-minimum job of reintroducing the story and move the plot ahead in some interesting ways. I may not like that he didn’t do as much filling in for the reader as I think he should have, but he also does a lot with a little, which is impressive.

The story itself is still very enthralling and I’m looking forward to where it goes. Bellegarde or no, I’m ready for more [easyazon_link identifier=”B01AGS3YFI” locale=”US” tag=”bounintocomi-20″]Nowhere Men[/easyazon_link].