“The Analog Man” arc begins and writer Jeff Lemire transports us 30 years into the future to a desolate, Mad Max-esque wasteland. What dangers does Bloodshot face in this new, unfamiliar world? How does it fare?

Lemire begins Bloodshot Reborn #10 in excellent fashion. He introduces us to this new world through the eyes of two children as they whisper to each other about the legend of Bloodshot and the dangers this wasteland poses. In this short scene, Lemire foreshadows the villains and does an excellent job of world building. Not to mention, in the next scene he absolutely kills it with some great characterization and dialogue between Magic and Old Man Ray. Their love just ripples off the page.

After the opening two scenes, Lemire transitions to an internal monologue to provide much needed exposition regarding the current state of affairs. But it’s not just exposition. Lemire uses it to show Bloodshot’s character and his do-it-yourself attitude. He also deftly incorporates other members of the Valiant universe and how their actions and reputations have influenced the current standing of the world. While the exposition and characterization during this internal monologue sequence is key, Lemire does get a little long-winded.

For the most part, Lemire keeps the plot very linear and tight. However, there is one flashback sequence that irked me a little. It involved a discussion with Magic that in all reality didn’t need to happen. It seemed to be almost out of place from the previous arc and the relationship Magic and Ray had created by the end. It felt like the strength of their relationship had regressed. 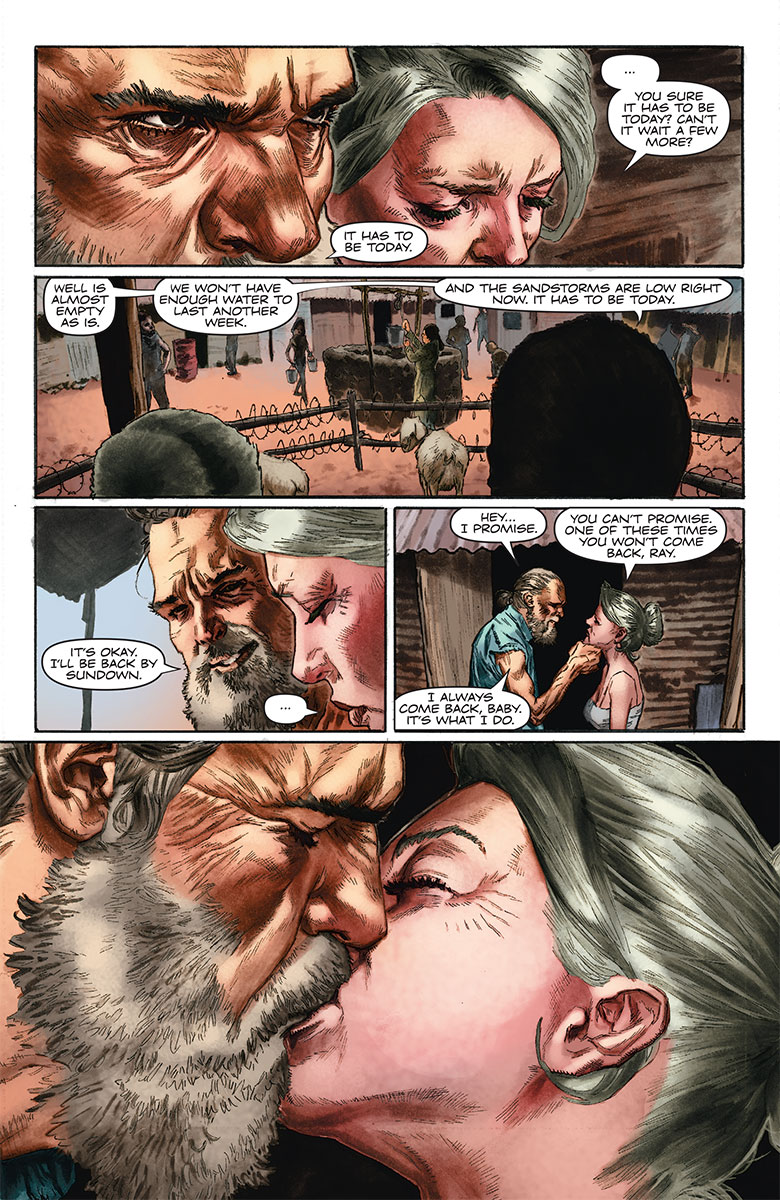 I absolutely adore Lewis Larosa’s artwork. It definitely has that Mad Max flair to it, but he also makes it his own. The first few panels depicting Old Man Ray are absolutely fantastic. You can see how happy and satisfied he is with his life. The smile Larosa gives him is contagious.

He also does a magnificent job during a transformation sequence. He allows you to see that joyful, happy old man turn into a serious, deadly killing machine. He also incorporates a number of different camera angles to expose us to the wasteland, taking us from a bird’s eye view, to an over the shoulder helicopter shot, to one looking right down the middle of a windshield.

The Shadowmen while also heavily Mad Max influenced have their own Valiant flavor. They are creepy and the physical positions he puts them in make them appear deadly dangerous. I mean these guys are so insane they are putting swords underneath their tongues while riding off road in an unexposed monster truck. Yup, definitely insane. 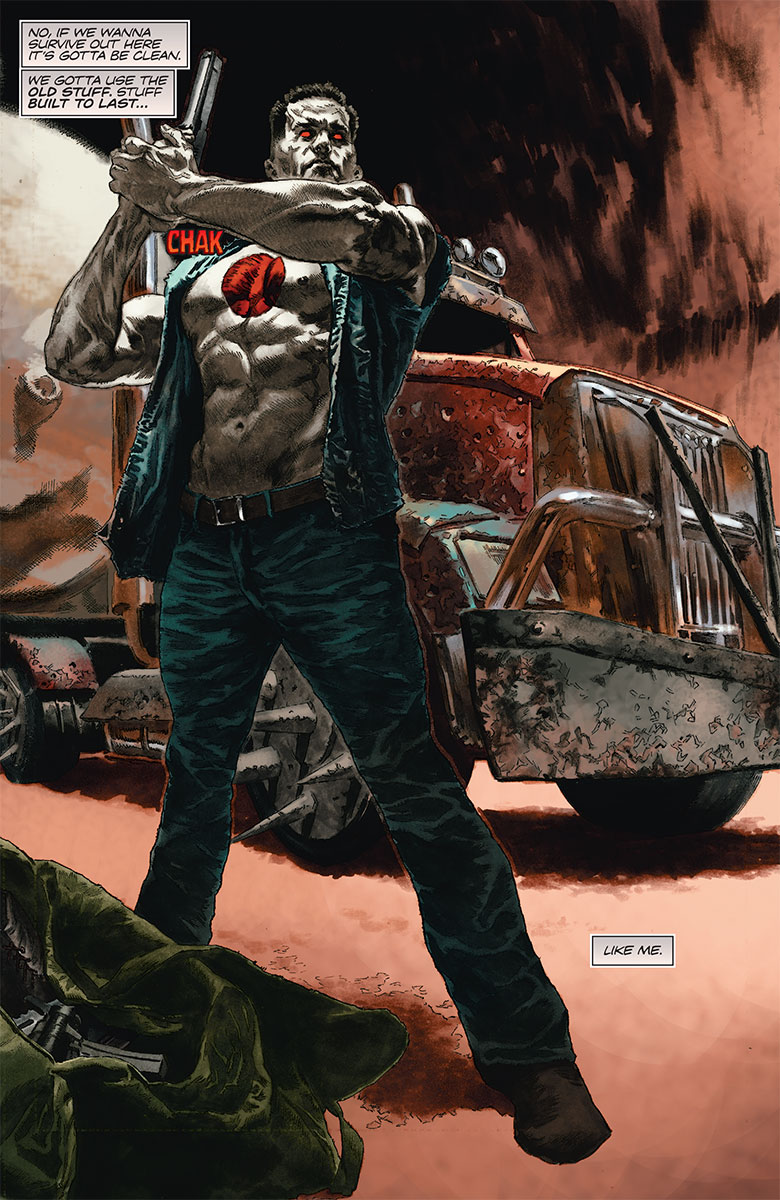 Larosa’s action sequences are definitely unique. He uses a lot of inset panels that are set at odd angles to speed up the pace and capture the chaotic car chase. It is also extremely violent with plenty of explosions and bullets galore, but he really ups the gore factor on the second to last page. It is honed and precise violence with a deadly outcome.

Brian Reber’s colors are really good. His subtle addition of white into the transformation sequence really sells the scene. He also does a great job of making the city of Los Angeles feel evil with dark green and gray clouds hovering above it, but the thickness of those colors fades away as one moves further from the city. It almost makes the city feel alive. 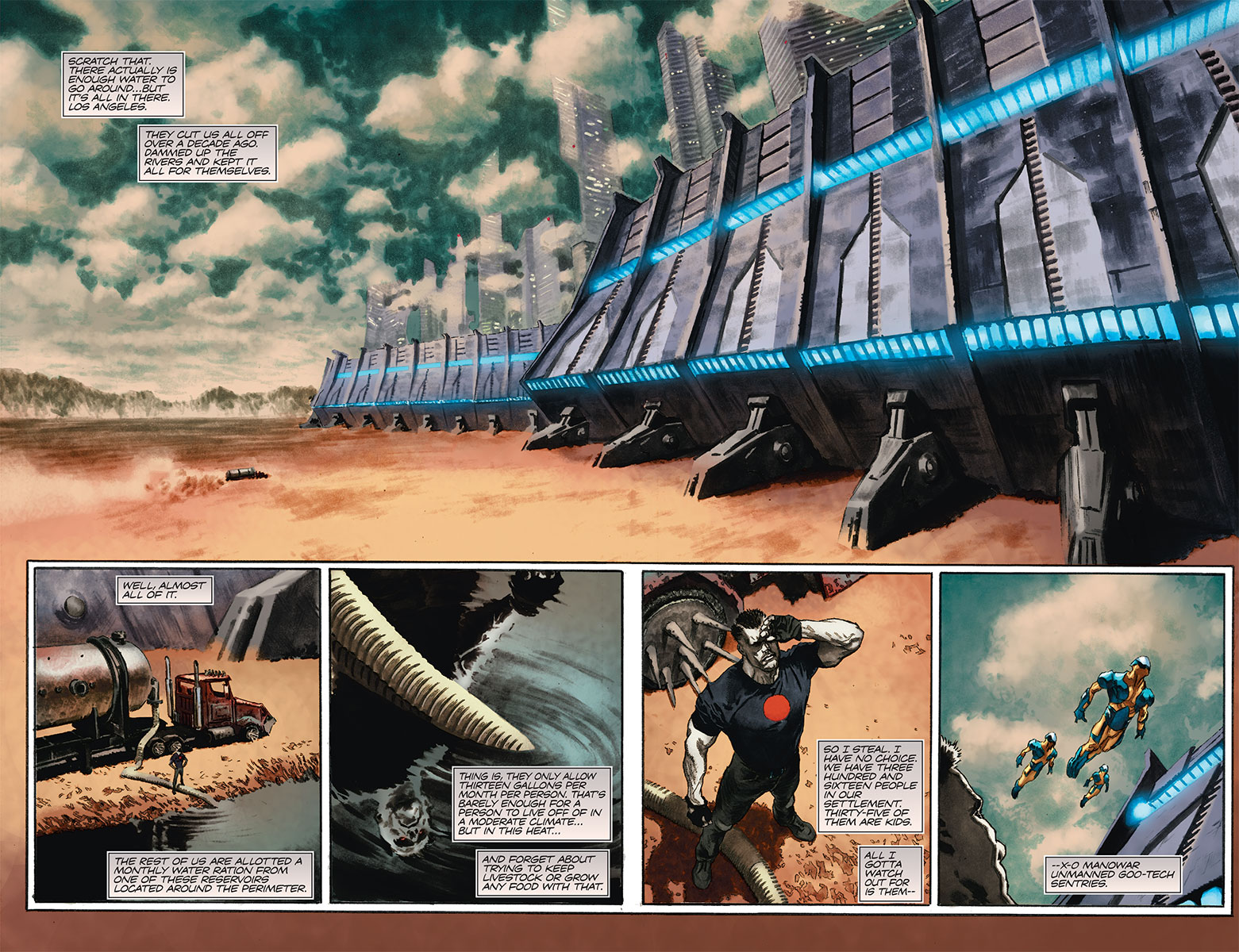 Bloodshot Reborn #10 continues to be one of the best books on the shelves even when Lemire and Larosa take us 30 years into the future to a Mad Max-esque wasteland. Lemire excels at characterization and building the world in a short amount of time, although he does get a little long-winded on fully fleshing out the world. The artwork really shines in this episode. It is truly magnificent from the action sequences to the more intimate personal moments. You should pick this up for the art alone; it’s that good.