Victorie City has reverted back to its old ways of corruption with police extorting businesses and tons of cases going unsolved allowing crime to flourish. However, one man, Detective Hektor Ness, hopes to begin a course correction. How does it fare?

[easyazon_link identifier=”B01AGYDABU” locale=”US” tag=”bounintocomi-20″]Victorie City #1[/easyazon_link] is definitely a different comic. It has a lot of noir elements with a grisly crime and a detective who must solve the case, but it also adds in an extremely corrupt police force to make the detective’s work even more difficult.

The story begins by introducing us to the villain. Keith Carmack and Vincent Nappi combine to really make their villain pure evil and they do it in a two-fold manner. The first is through dialogue and the subject matter he discusses with an unassuming waiter. It is dark and foreboding and probably one of the most evil subjects one can fathom, infanticide. Their villain’s first topic of discussion is killing your own children. It’s sick, twisted, and evil. 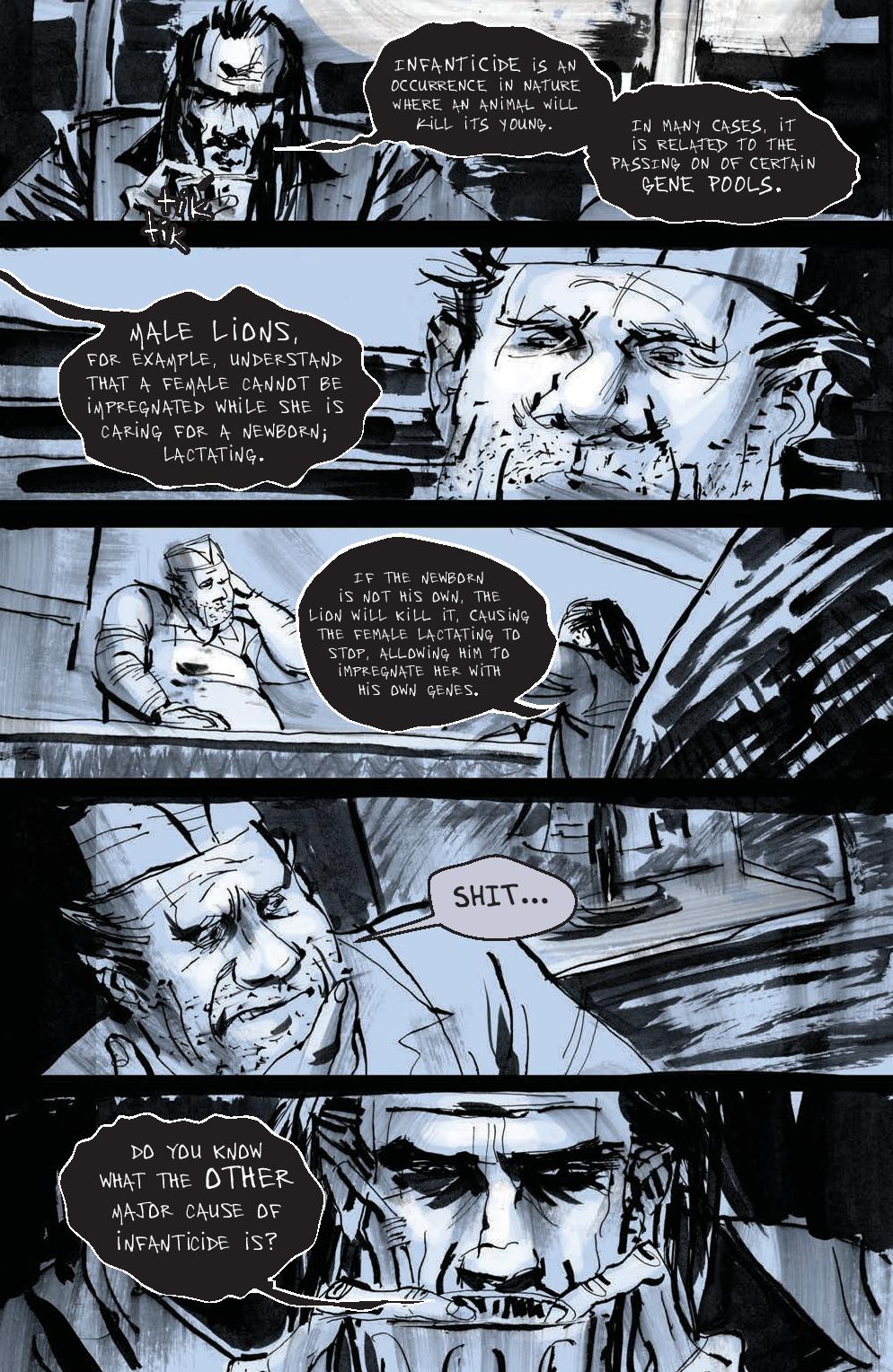 The second part of showcasing this villain is through his actions and they are brutal. Vincent Nappi’s artwork captures the villain’s brutality and sadistic nature. It is dark and grisly with tons of rough black lines on wood doors to chaotically grown trees and bushes creeping up the side of the house. Carmack includes a sinister villain monologue to go with the art and it is just pure creepy, Criminal Minds psychopath stuff.

After introducing the villain, Carmack introduces us to the hero, Detective Hektor Ness. He gives us a clear picture of who he is and what motivates him. We even get some nice little asides about his relationship with his father and how that has influenced his life decisions. Probably the most interesting aspect about Ness is his relationship with his wife and how they interact with each other. Their discussions really let you inside Ness’s head. However, the wife is very much a one dimensional character, acting as a sounding board for Ness. Nevertheless, there is plenty of room for growth.

The pacing of the book slows down quite a bit as Carmack really focuses on detailing who Ness is, what he does, and how awful Victorie City is. Towards the end of the issue the pace definitely picks up, with Ness’s integrity forcing him to take action. However, the last few pages didn’t seem to gel in any way with the rest of the issue. The story transitions from a phone conversation with his wife to Ness running down a perp. It doesn’t make sense at all and completely catches you off guard. 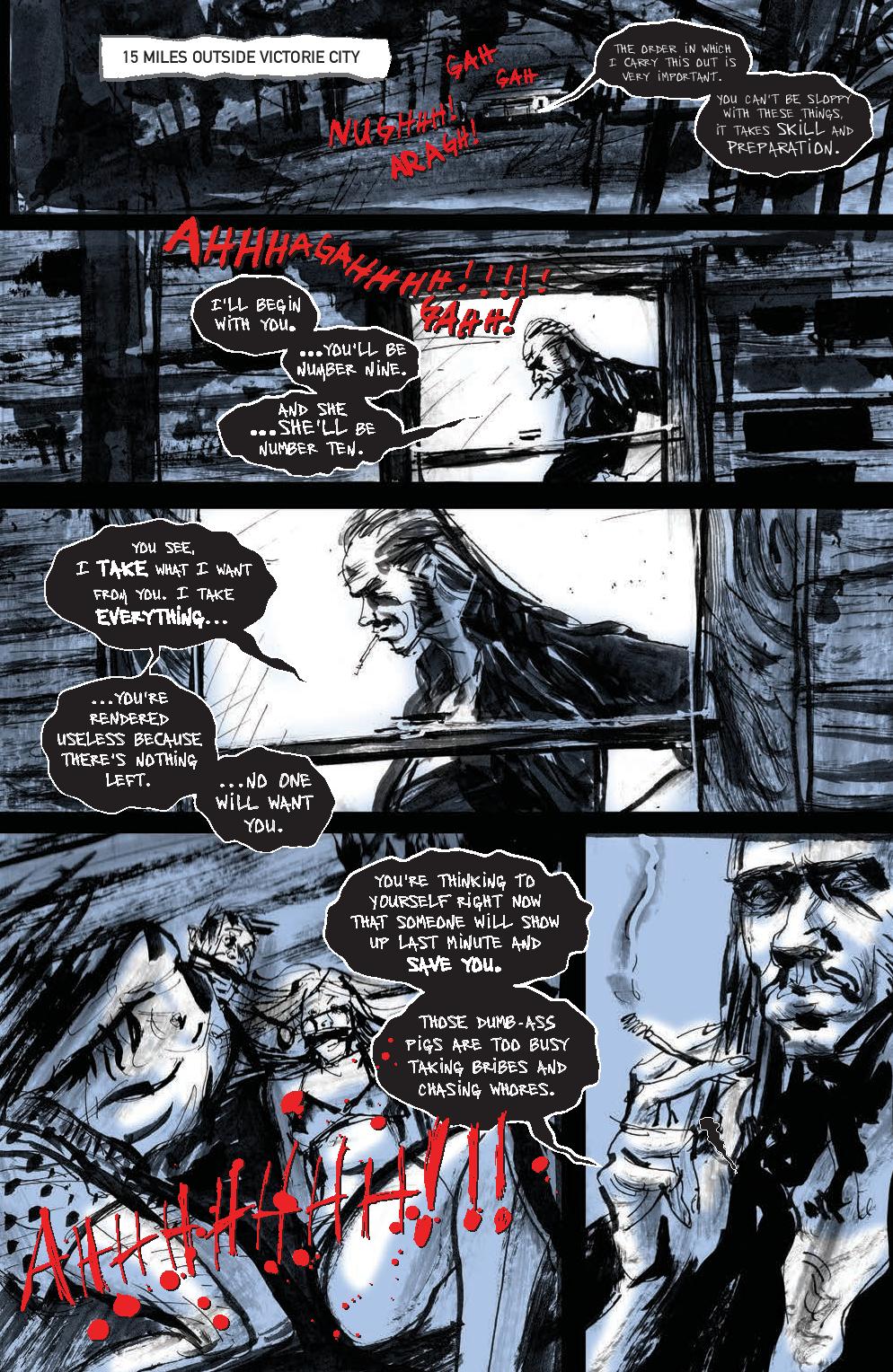 One reason it might catch you off guard is the distinct art style that Vincent Nappi uses. He maintains the harsh lines throughout the story. It can make it difficult to figure out what is happening as some of the lines can bleed into other objects. It can also make the characters difficult to distinguish one from another. What his art style does excel at is creating a dark, creepy tone to the book.

While the art may make it difficult to identify characters and figure out why certain scenarios are occurring, the lettering really struggled and was off-putting from the first page. Jessi Adrignola attempts to create almost child-like lettering to further solidify the creepiness and evil of the villain. Instead, it just comes off as childish and can be a tad difficult to read. He also plays with a number of the word bubbles giving them odd looking shapes that just become a distraction from the story.

[easyazon_link identifier=”B01AGYDABU” locale=”US” tag=”bounintocomi-20″]Victorie City #1[/easyazon_link] is an interesting noir tale set in a dark and corrupt city. Keith Carmack and Vincent Nappi do a good job of characterizing their villain and hero, as well as setting the tone and building the world of Victorie City. The book struggles towards the end with an apparent random sequence between the villain and Detective Ness. Vincent Nappi’s harsh and rough art style does a great job of capturing the tone but it can also make it a tad difficult to identify characters and follow the action. The lettering in the book was very distracting with odd shaped word bubbles and actual letters that appeared to be done in the style of elementary school kids on a chalkboard in an attempt to amplify the creepy tone. It just ends up being a distraction.