When most folks are asked what the best episode of the original Star Trek television series is, most folks will state “[easyazon_link identifier=”1631402064″ locale=”US” tag=”bounintocomi-20″]The City On The Edge Of Forever[/easyazon_link]” as the best and for good reason. From the opening scene to the sweeping finale, that episode was the best written episode on television. Originally written by renowned writer Harlan Ellison, the final script ended up being revised at the hands of writers approved by Gene Roddenberry. Fans of Mr. Ellison will know that he does not take kindly to changes to his work. Like any writer, I am sure that if a change makes sense he would have no problem with it but some changes to the story were contrary to his original intent for the story. For years, the closest people came to seeing what Mr. Ellison’s version of the story would be came in the form of a book he put out in the mid-90’s. IDW Comics this past year released a trade paperback comic that adapts Harlan’s original script into comic form, it may be the closest we’ll ever get to seeing how this story was supposed to look.

To start with, there aren’t too many changes between this version of the story and what aired on television. However, one huge change right off the bat starts with the fact begins the story with two random crew members using drugs instead of seeing Dr. McCoy have an accidental drug overdose and heading to the Guardians of Forever planet.

This is an interesting development. Mainly, because it runs counter to what Gene Rodenberry’s ridiculous vision of the future will be. While I can get behind a vision of the future where we don’t have to deal with some of the nonsense we deal with today, I simply don’t buy a future where all personal strife is gone and things like humans using chemicals to alter their perception of reality is a thing of the past. Humans have always found ways to self mediate through the ages and if we ever do reach the stars, I would be shocked if we didn’t find some way to snort moon rocks in order to get high.

One of the drug-using crew members ends up getting caught after the situations escalated and he murders someone on the ship who was threatening to snitch him to the Captain. This crew member is the one who heads to the planet and back into time. McCoy doesn’t make much of an appearance in the story at all.. 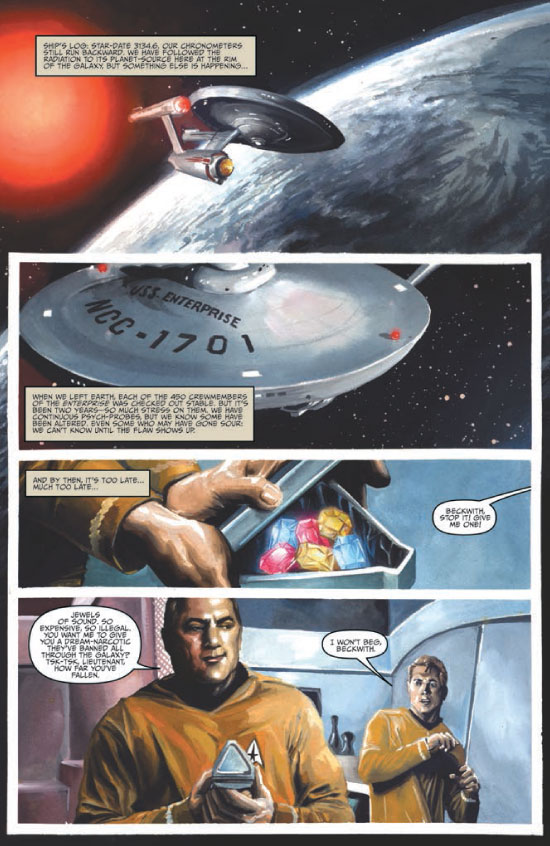 This change is also the biggest issue I had with the story. By having an unknown crewman be the one who travels back into time, you take out what essentially became the heart of the story. The only good thing this crew member did in the course of this comic was attempt to save Edith Keeler from the speeding truck that ended up killing her. I didn’t buy that a person who straight up killed someone just because he was going to be snitched on would think twice about a strange lady who, in the course of this comic, he only sees when she’s crossing the street with the truck barreling down on her.

The only change I would have made would have been to include some scenes, similar to the original television show, that showed the crewman in question interacting with Edith Keeler so he would have a reason to save her. You may be saying ‘Why wouldn’t he just do the right thing and try to save someone no matter what?’ In real life, yeah, that happens all the time. You hear stories of folks that are otherwise the scummiest of people that end up doing something nice or even life saving for someone. It happens. But this is a story. You have to establish a character as someone who would go out of their way to save someone. You cannot have a whole story where this guy is straight up evil and then decide at the drop of a dime that he’s suddenly going to be good. Again, this is not saying that I think it was absolutely wrong for this character to save Edith Keeler, Harlan should have done more to establish that this is something the character would actually do. Something as simple as a scene or two with this character and Miss Keeler would have sufficed.

A second change comes with making Edith Keeler’s importance to history being a lot more ambiguous. In the original episode, Edith was responsible for preventing World War II and altering the known timeline. She had to die in order for everything to be set right. Kirk and Spock end the episode by stating that she had the right idea for peace, just that it came at the wrong time. 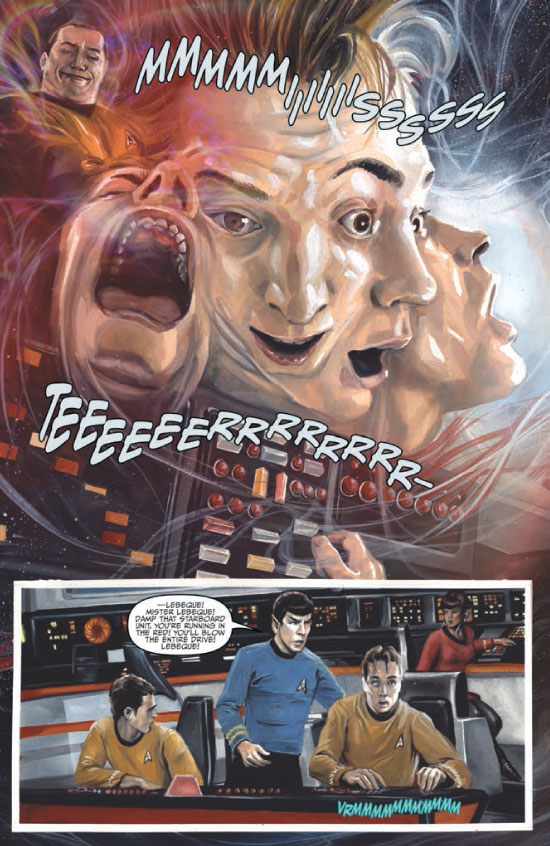 By making her importance to history a little more ambiguous, you take out the pro war aspect of the original story which I think is a superior change. To have a show that tackled so much in terms of dealing with the woes of society have an episode like this that essentially supported war was a dark spot on the franchise. Yeah, war can happen. People being people, they will always find ways to hurt each other. But making one woman who worked in a street mission responsible for preventing one of the deadliest wars in history just to showcase her importance was frankly not needed. The story more than set up her peace loving nature. There was no reason to detail what she specifically did in history. All that needed to be said was that she was important and that her death was needed to maintain the timeline.

When it comes to the art, I was not a fan of it. I did like, however, the inclusion of what can only be deemed an artist’s commentary at the end of the book. I have found that I have been able to get a better appreciation for some things I normally didn’t care for by simply finding out what inspired them to produce what they did.

“[easyazon_link identifier=”1631402064″ locale=”US” tag=”bounintocomi-20″]The City on the Edge of Forever[/easyazon_link]” is a must read for Star Trek fans. While the story is not perfect, when you have a master wordsmith like Harlan Ellison finally getting a chance to show the world both with words and visually the idea he had for this episode, you have to support it. The gripes I had with this comic are purely subjective. Just because I didn’t care for them doesn’t mean they’re necessarily the wrong choices. I just didn’t like them and would have responded differently if I were writing the piece.

The artist’s commentary at the end is worth the price of admission alone. For an artist, it is a great way to see what went into the creation of the comic. For a non artist like myself, knowing what brought about some of the pieces of the comic gives me more understanding why they chose to do what they did. While I am a huge fan of the art, the artist’s commentary made me think twice about what I viewed. This is well worth a read.