The crime noir continues with Detective Hektor Ness pursuing a missing persons case while the villain, Brahm Allvar, is delivered his due process in a criminal court. How does it fare?

Writer Keith Carmack and artist Vincent Nappi split this second issue of Victorie City into two main stories. The first follows Brahm Allvar as he is tried for a double homicide. The second follows Detective Hektor Ness as he pursues a missing person’s report. The back and forth between Ness and Allvar’s case does a great job of characterizing Brahm. Not only does Carmack’s dialogue allow us to add on to Nappi’s image of the murder from the previous issue, but it fleshes it out, providing all the key details and really displaying how evil he is. In addition, Ness’s detective work displays another side to Allvar’s villainy and something that was alluded to in the first issue: his ability to hollow a person out. It not only shows his evil nature, but depicts a whole different kind of evil.

Aside from providing this characterization, the dialogue is a pretty by-the-book police procedural. It has a real Law & Order type feel. Except in this case, the police work and trial are happening at the same time rather than the police work taking place first and the trial following it. You could probably even pick up this book and hop on the series without any difficulty. Carmack does a good job of providing exposition. 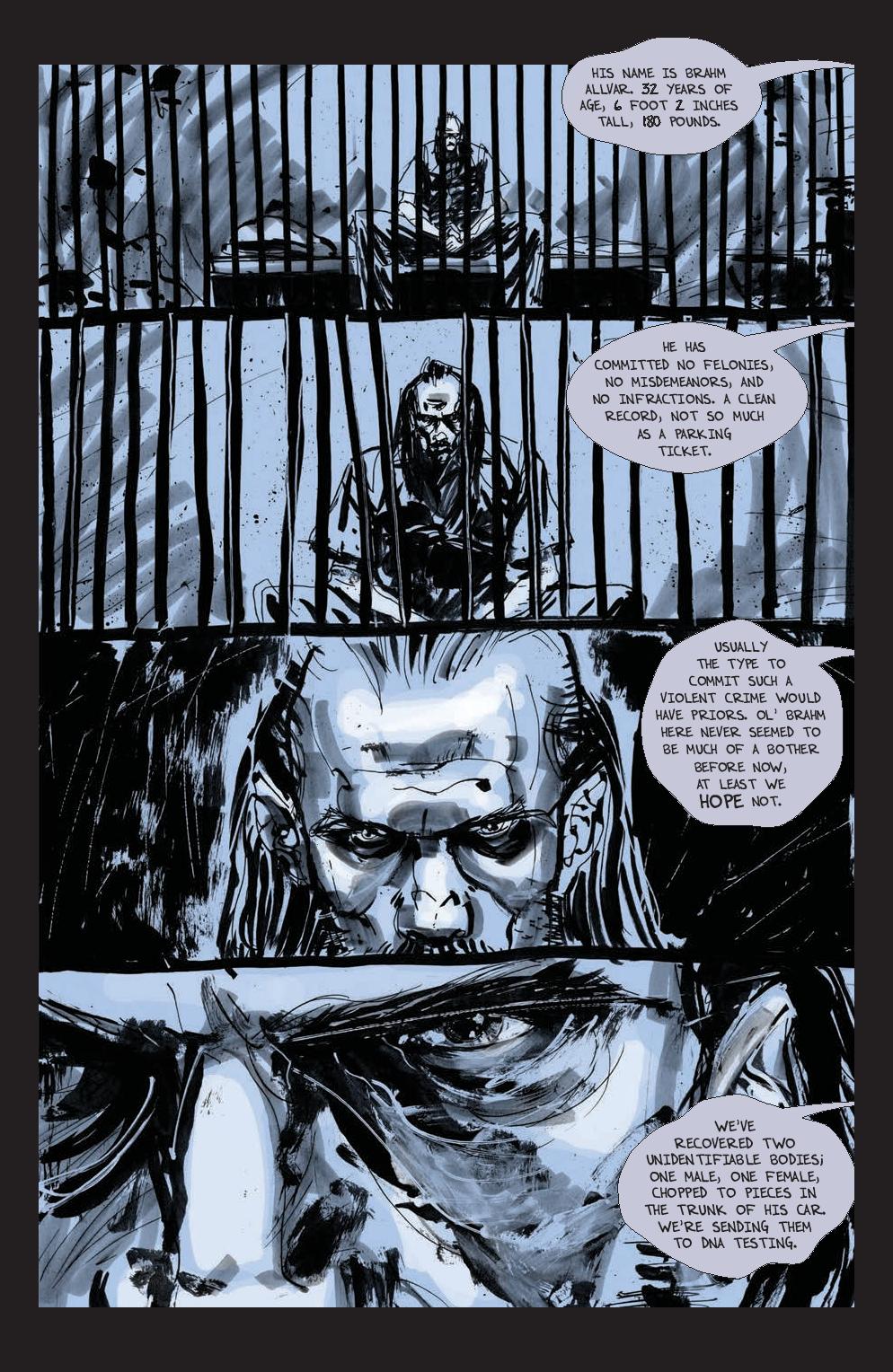 There are some really good pieces of dialogue. Ness attempts to get information from a woman who runs a women’s clinic. The conversation is fantastic and you can see Ness’s frustration building, not only in the words but in Nappi’s art as well. The back and forth between the two characters is excellent and addresses problems, but also safeguards in detective work. There was some sloppy dialogue at the end. I’m not sure if it was because Carmack was trying to insert some horror or just depict the stupidity of the police officer. Nevertheless, it just didn’t seem to fit the situation.

The story for the most part is pretty straightforward as well. It is what you expect from a police procedural. Although, there are subtle hints throughout the trial that reveal something even more sinister about Brahm Allvar. This finally comes to a head at the end of the issue as Carmack and Nappi finally reveal their major story turn.

Nappi’s artwork maintains the creepy, dark tone of the book with his rough lines. For the most part, it is much clearer than the previous issue. There aren’t many scenes where you can’t tell what is happening. However, there is one action scene where it is quite difficult to really figure out the details of the fight. You know it’s a fight, but you can’t really tell who it is between or why it is occurring. Carmack does provide some dialogue to help you along the way, but it still isn’t very clear. 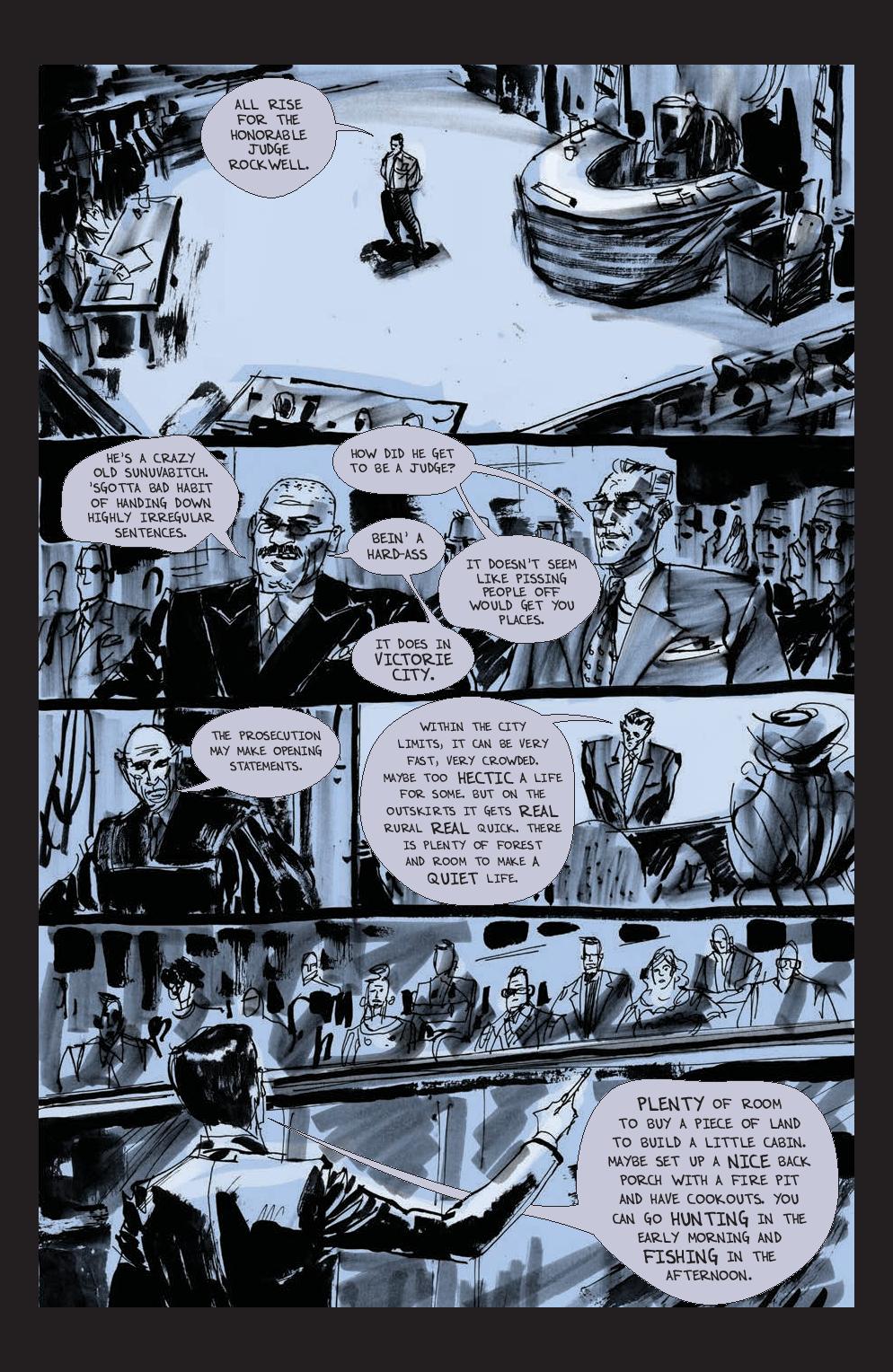 Nappi does a really good job with the characters’ body language, whether Allvar is in an imposing and powerful position on the stand with his arms folded in front of his chest, or the judge slamming his gavel down with his other hand upraised in a fist, or even Detective Ness’s wife resting her head on top of his as they discuss the case. They all convey solid emotions and help characterize them without any dialogue.

The lettering is still the same from the previous issue, and going forward I don’t see it changing much. This is the style they chose.

Victorie City #2 for the most part is a pretty run-of-the-mill police procedural with a noir tone. However, it does finally throw a turn at the end of the issue that can possibly take the story in a vastly different direction. The characterization was solid. The dialogue was pretty good, although there were some minor slip ups. The artwork for the most part was very good in setting the tone and depicting emotions, although the action scenes make it difficult to figure out the details.