Stel continues her journey to the surface while her two reunited daughters, Tajo and Della, descend to the depths to return home to Salus. What will their reunion be like? How does it fare?

[easyazon_link identifier=”B01BE2H6UO” locale=”US” tag=”bounintocomi-20″]Low #11[/easyazon_link] is very much a character and relationship exploration issue of Tajo and Della. Creators Rick Remender and Greg Tocchini don’t even give us a glimpse of Stel. Remender does continue to explore the underlying themes of hope and how belief in an ideal can shape the reality of one’s life.

The dialogue between Tajo and Della is the highlight of this issue. Remender and Tocchini draw clear distinctions between the two sisters. Tajo is ready to move on from her capture and imprisonment at the hands of Roln. She also wants to be able to openly talk about her experience with Della and try to get to know her. Della isn’t having any of it. She is much more reserved and mission oriented. These two drastically different personalities allow Remender to explore some sisterly drama in heated discussions.

Not only do their different personalities play a role in their outlook for the future, but Remender also makes it very clear how being in the presence of Stel can affect one’s outlook. Even when Stel isn’t on the page, her presence is felt. Remender makes this abundantly clear in a sequence where Della goes off on Tajo. 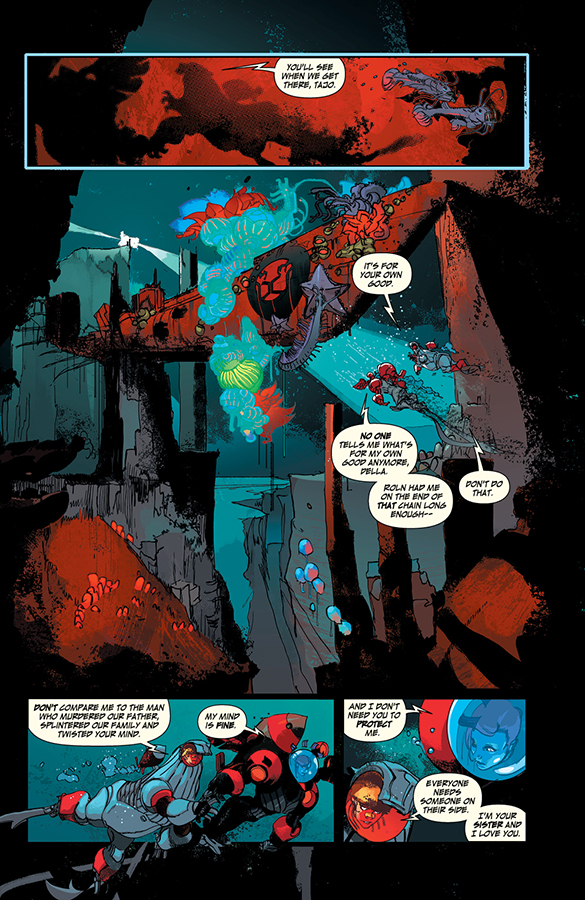 While the majority of the issue focuses on the relationship between Tajo and Della, Remender and Tocchini leave them for a few pages to give us a look at what is happening in Voldin. It is a not so subtle reminder that everything is not hunky dory within the world of Low. These scenes in Voldin build anticipation and set the stage for a larger conflict.

Remender also introduces two new characters. Unfortunately, he doesn’t really spend a lot of time with them and we are only given cursory looks at them. However, one of them may yet play a larger role in the story down the road. While the other plays a key role in the characterization of Della.

Greg Tocchini’s artwork is what we have come to expect. However, with the nature of this issue being much more relationship and philosophically focused, we don’t get to see as many of the large sweeping aquatic pages. Instead, we have up-close-and-personal panels with Della and Tajo. Tocchini is able to expertly capture their emotions whether it is shock, anger, or sadness, although there are times where he struggles with facial expressions. There is one panel where Tajo’s mouth looks like it is falling off her face and some of the grimaces Tajo and Della make at each other look a little flat. On the other hand, there are some really excellent panels capturing Della’s emotion as she shouts at Tajo with tears streaming down her face. You can feel the raw emotion just bleeding off the page. 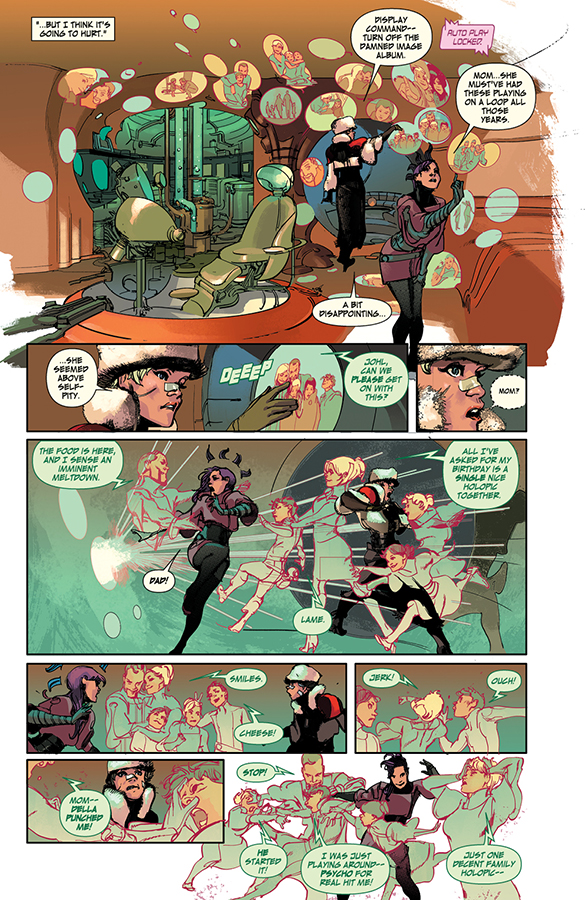 Dave McCaig’s colors are as good as ever. He uses a diverse color palette of blacks, reds, browns, and blues to capture the darkness of the ocean depths and the danger lurking within it. He expertly accentuates the emotions of Tajo and Della by using varying shades of red to show their emotion and anger in their verbal sparring. Probably the most standout feature is the blue in Della’s eyes. It sells her emotions and makes her feel life-like.

[easyazon_link identifier=”B01BE2H6UO” locale=”US” tag=”bounintocomi-20″]Low #11[/easyazon_link] is not the happy reunion you were hoping for between Tajo and Della. Instead, Remender expertly captures their differences and is able to use them to explore their fragile relationship and the overarching themes of hope and the idea that belief can shape reality. The art is what we have come to expect from Tocchini although there are a few mishaps. Yet, there are also some excellent panels. If you have been enjoying Low up to this point, this is another solid addition. It will be much more difficult for new readers to jump on, although they do provide a pretty in-depth recap at the beginning of the issue.