The Troop continues to expand, adding more members. However, a rift could be developing at the top that may break the new group apart. What new challenges will they face? How does it fare?

[easyazon_link identifier=”B01BGFZLM4″ locale=”US” tag=”bounintocomi-20″]The Troop #3[/easyazon_link] starts with the team on the brink. There is a ton of distrust and explanations are demanded. It is exciting and drama-filled. Noel Clarke takes this tension-filled atmosphere and channels it into some heavy exposition. He provides a ton of back story in a small space. However, it isn’t direct narrative exposition; rather, it is dialogue from Edwards explaining the situation. This allows Clarke to actually have the exposition be a complete lie or even a half-truth. He brilliantly understands this and uses Terrain to act as the voice of the audience to question Edwards’s intentions.

After this excellent opening scene, Clarke uses a hard transition to introduce us to another new, empowered person. Much like the previous two issues, Clarke does an excellent job of characterizing the new character, Owen, by giving him a truly tragic background, although the sympathy is short-lived once you find out the reason for his descent. However, you have an idea about the character’s personality, who he is, and how he will act within the group. Clarke does a good job of transitioning within the story line from providing Owen’s back story to a high octane chase sequence in the present. It brings him into the world of The Troop.

Another hard transition leads to another group of individuals and their story. Clarke does a great job of building suspense in this story line, giving us a life or death situation on the first page where we meet the new characters. Before anything can happen, he jets us back two months in the past to give us details about the group and their life in Brazil. Clarke focuses more on their harsh background and environment rather than personalities and also introduces us to their powers. 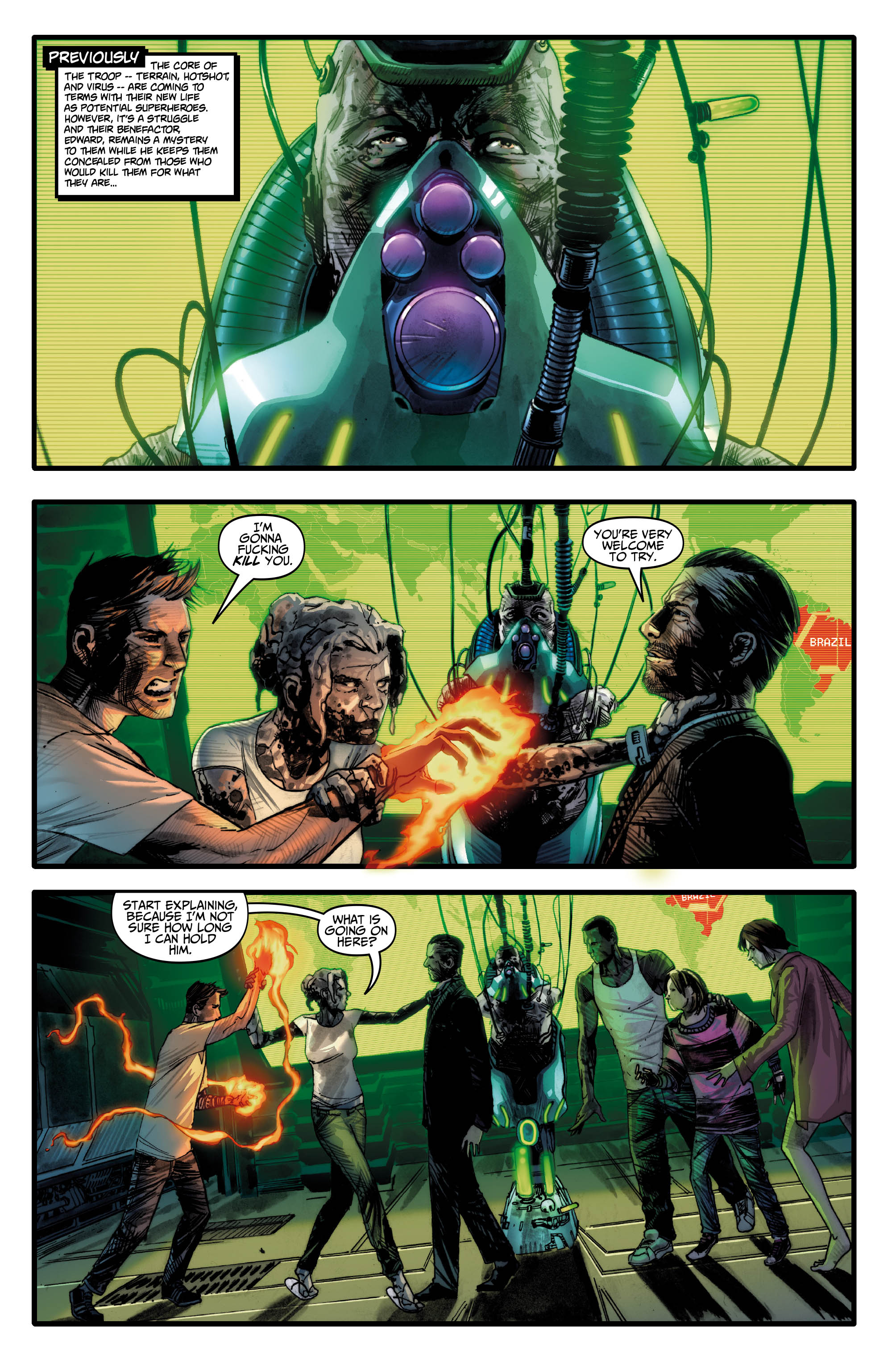 The story has plenty of twists and turns with the addition of new characters and the tension rising among the current members of the Troop. With every flip of the page, you aren’t really sure what is going to happen, what new villains will be introduced, or new empowered individuals will show up. Clarke keeps it exciting.

Joshua Cassara does an excellent job of aiding Clarke in keeping it exciting. His artwork is as good as the previous two issues. It is dark and violent. He expertly captures the villainy of the characters, but is also able to draw out extremely moving moments and make you really feel the emotions of the characters. You can feel the anger burning up within Hotshot and the distrust brewing within Terrain. He does this through their facial features and their body language. In Hotshot’s case, his clenched teeth and his flaming hand reaching out to burn Edwards exudes anger and borders on hate.

Cassara also aids in characterizing Owen with a couple of panels describing his addiction to extreme sports. While the first two panels are what you expect from an adrenaline junkie, the last panel shows how extreme he actually is with Great White Sharks jumping out of a wave attempting to eat Owen as he surfs. Oh, did I mention there are also mines floating in the water as well? 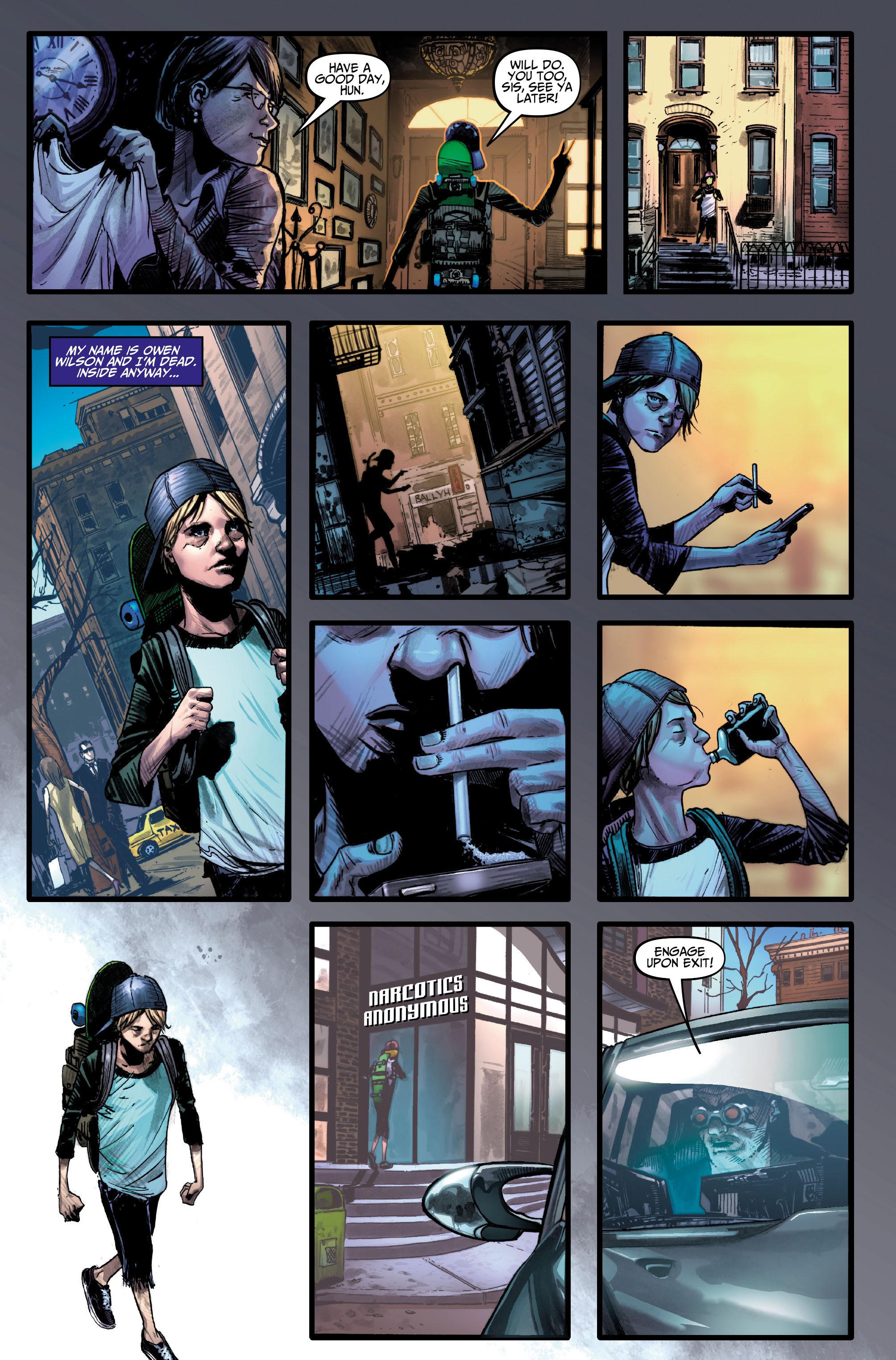 Luis Guerrero continues his excellent coloring work. He keeps the tone dark using browns, purples and dark blues. He also manages to make sure the action usually happens when the sun is either setting or just rising. He does a really good job of capturing the gun fire. The muzzle fire has a bright white center surrounded by orange and red. It immediately captures your attention and emphasizes the violence being enacted.

[easyazon_link identifier=”B01BGFZLM4″ locale=”US” tag=”bounintocomi-20″]The Troop #3[/easyazon_link] still struggles with the hard transitions. The tension and distrust among the team is delightful and creates a good amount of drama. It makes for a great story and allows Clarke to flex his writing muscles, putting different characters in tough situations. In addition, Clarke is able to provide a number of twists and turns with new characters. The artwork is absolutely fantastic from violent action sequences to strolls through a Brazilian favela. It is top notch. You need to be reading this book.