Gil’s tyrannical rule runs rampant throughout the camp as both Scott and Raja fall victim to his wrath. Will Raja be able to find a way to escape the camp and save humanity? Is humanity even worth saving? How does it fare?

Writer Rick Remender and artist Jonathan Wayshak do an excellent job of pacing [easyazon_link identifier=”B01BU0PBC0″ locale=”US” tag=”bounintocomi-20″]Devolution #2[/easyazon_link]; before you know it, the book is already over. Remender and Wayshak do a great job of giving us high octane action, powerful character moments, extreme brutality, and even a little bit of philosophy.

Remender and Wayshak really focus the book on Gil, the political structure he has created, and his extremely brutal methods. There are a couple of points in the book where the artwork and dialogue combine for some cringe-worthy moments. You almost have to put the book down because it’s giving you the willies. It shows how ruthless, but also how powerful Gil is, since no one in the camp stands up to him.

The dialogue is top-notch as expected from Remender. You can feel the emotion and determination pouring out of Raja as she pleads her case to Gil. You can also feel the defeat in Scott’s words as he begs for mercy from Gil. On the other hand, you can feel the menace and power emanating from Gil. Remender is able to give each of his characters a unique voice and personality that allows you to relate to them. 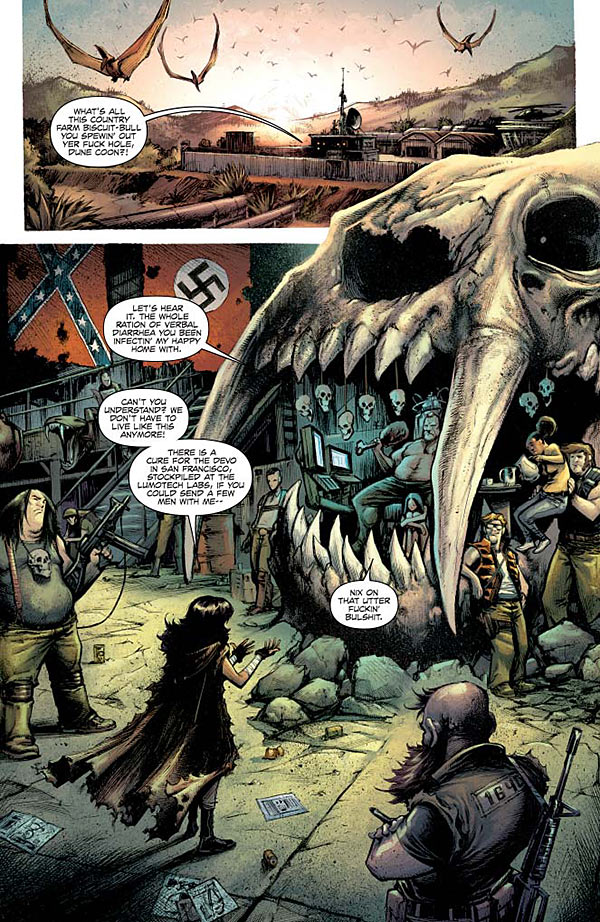 Wayshak’s artwork is even more violent and provocative than the first issue. He is able to conjure up fear with a pair of giant scissors in the foreground and, just for an added touch, he adds a nice little shine to them. It’s that little extra detail that pushes it over the edge.

His facial features are excellent, you can see the fear on Scott’s face in a number of different panels. Even when Scotty is exhibiting a similar emotion, he exaggerates his features a little more or adds a tiny detail, such as exposing his bottom teeth, to show how the emotion has heightened.

He uses a number of different camera angles to capture multiple intense moments throughout the book. There is a two-panel sequence where he depicts Raja and Gil going head to head. In the second panel he uses a low camera angle looking up at Gil to depict where his power comes from. It perfectly captures who Gil is.

The only drawback to Wayshak’s art is his apparent obsession with drawing his characters having elongated jaws. The characters’ mouths always look enormous when they are shouting. It is a little off putting. 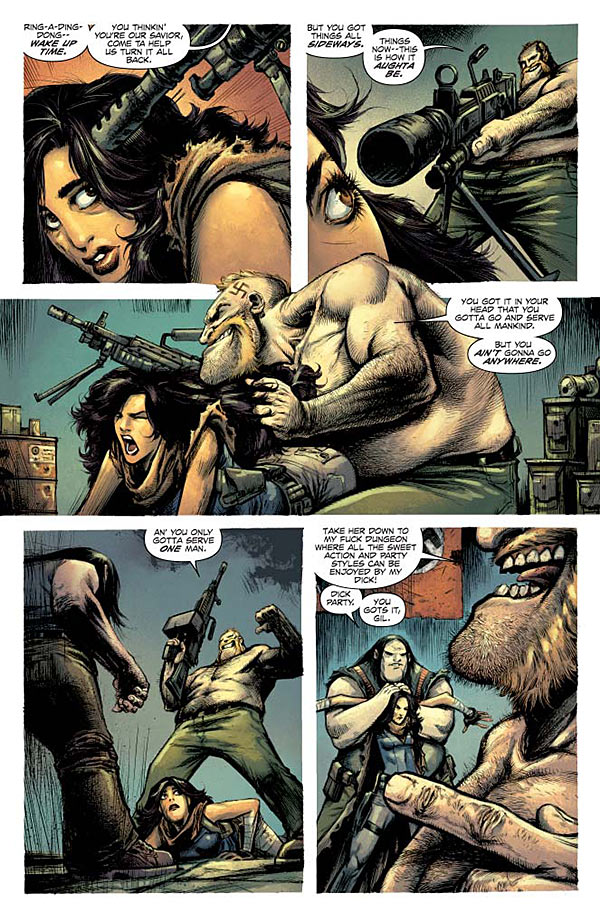 Jordan Boyd’s colors do an excellent job of setting the mood and tone of the book. He uses an orange-red mix as a background to a very dark close-up of Gil’s head. It just emanates rage and anger. He also incorporates a bluish-purple background in a number of the panels in the second half of the book to capture the night. It gives the characters’ actions an almost mystical quality.

[easyazon_link identifier=”B01BU0PBC0″ locale=”US” tag=”bounintocomi-20″]Devolution #2[/easyazon_link] strikes at your emotions. It is crude, violent, and exciting. The dialogue crafts unique voices for each of the characters and the artwork brilliantly captures the brutal world in which they find themselves. You need to be reading Devolution!