In 1776, The Shield has been captured, but her fate remains a mystery. While in the present day, she begins to recover her memory as she flees a group of highly-armed government agents with the assistance of her detective friend. Will she be able to escape? How does it fare?

[easyazon_link identifier=”B012HIPMYG” locale=”US” tag=”bounintocomi-20″]The Shield #2[/easyazon_link] begins back in 1776 with The Shield incapacitated and in the back of a wagon. The entire sequence is really one big tease. Writers Adam Christopher and Chuck Wendig build up the mystery and even use minor characters to act as the voice of the readers, “Colonel, tell us what is happening, by God!” Unfortunately, Wendig and Christopher remain mum on this point and the entire sequence just seems to be used for a violent act against two soldiers making lewd comments about The Shield. They even repeat the same phrase three times. It becomes redundant and feels a lot like page-filler. To make matters worse, they don’t even go back to it later on in the issue and it becomes all but forgotten.

Once Wendig and Christopher transition to the present, the story begins to take shape. It has a very Jason Bourne vibe with government agents using the entire power and resources of the federal government to track down The Shield and the detective. The Shield doesn’t even have her memories just like Bourne. It does get bogged down a little bit with dialogue. Christopher and Wendig insist on reminding us what we just witnessed a few pages ago. 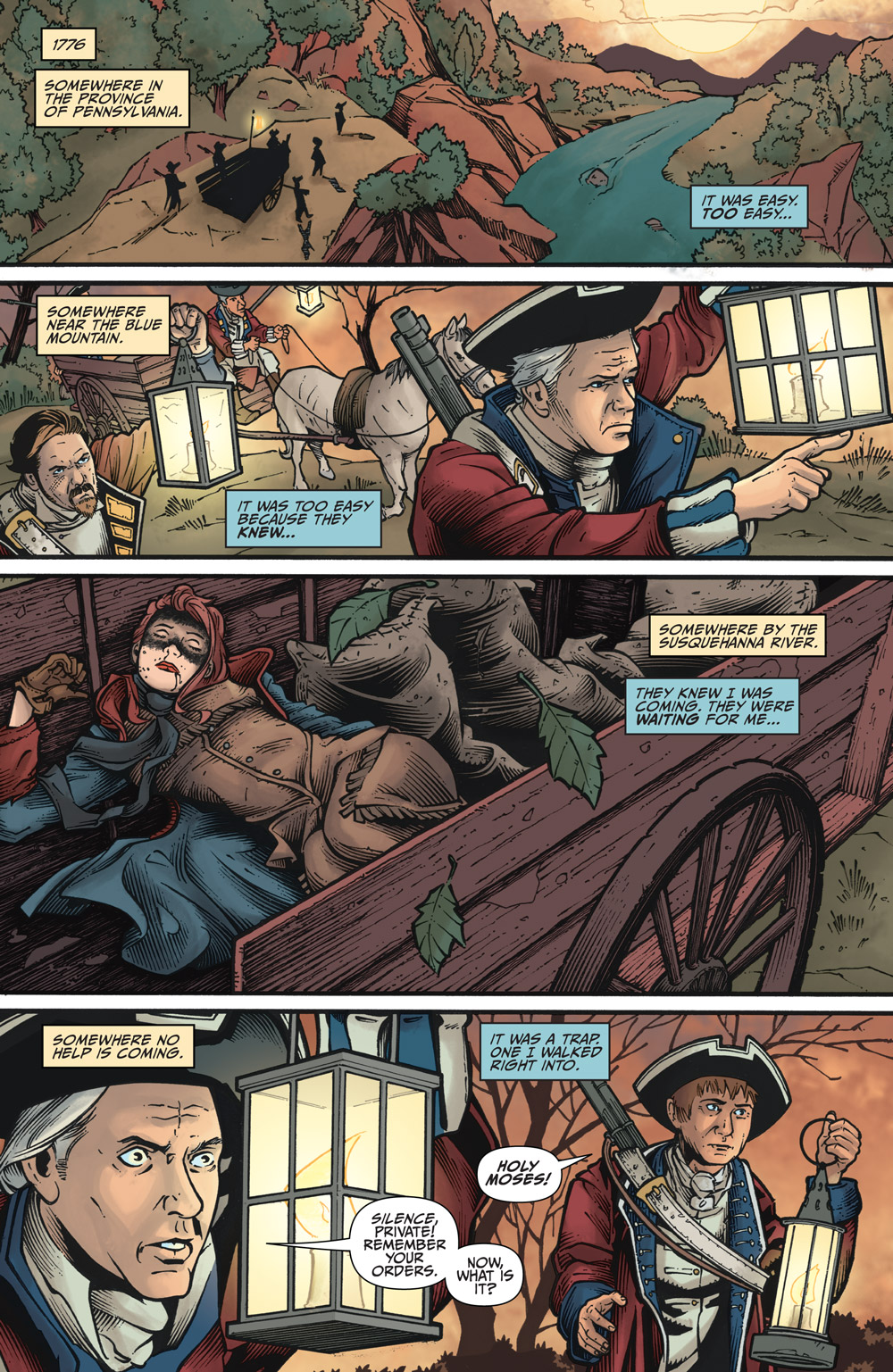 There are some great moments of dialogue that elevate the tension of the chase. One of those is between the government agent and the police captain. It shows the urgency of the mission as well as how motivated and determined the government agents are to find The Shield. Although, they do seem to give the captain the title of chief as well.

The transitions between sequences are a little rough. Wendig and Christopher just drop us into the scenes without any notice. It can be a little jarring and takes you a little bit to readjust and figure out what you are seeing.

The art duties are split between Drew Johnson, Ray Snyder, and Al Barrionuevo. They all do a good job of keeping the style consistent; it is actually quite difficult to tell they covered different pages. There are some neat panel layouts. Johnson and Snyder use three horizontal panels across the page to capture the dangerous height The Shield and the detective are at. In the third, large horizontal panel they break it into five smaller panels. It does a fantastic job of capturing a fall as they guide your eyes down the page just as the characters are falling. 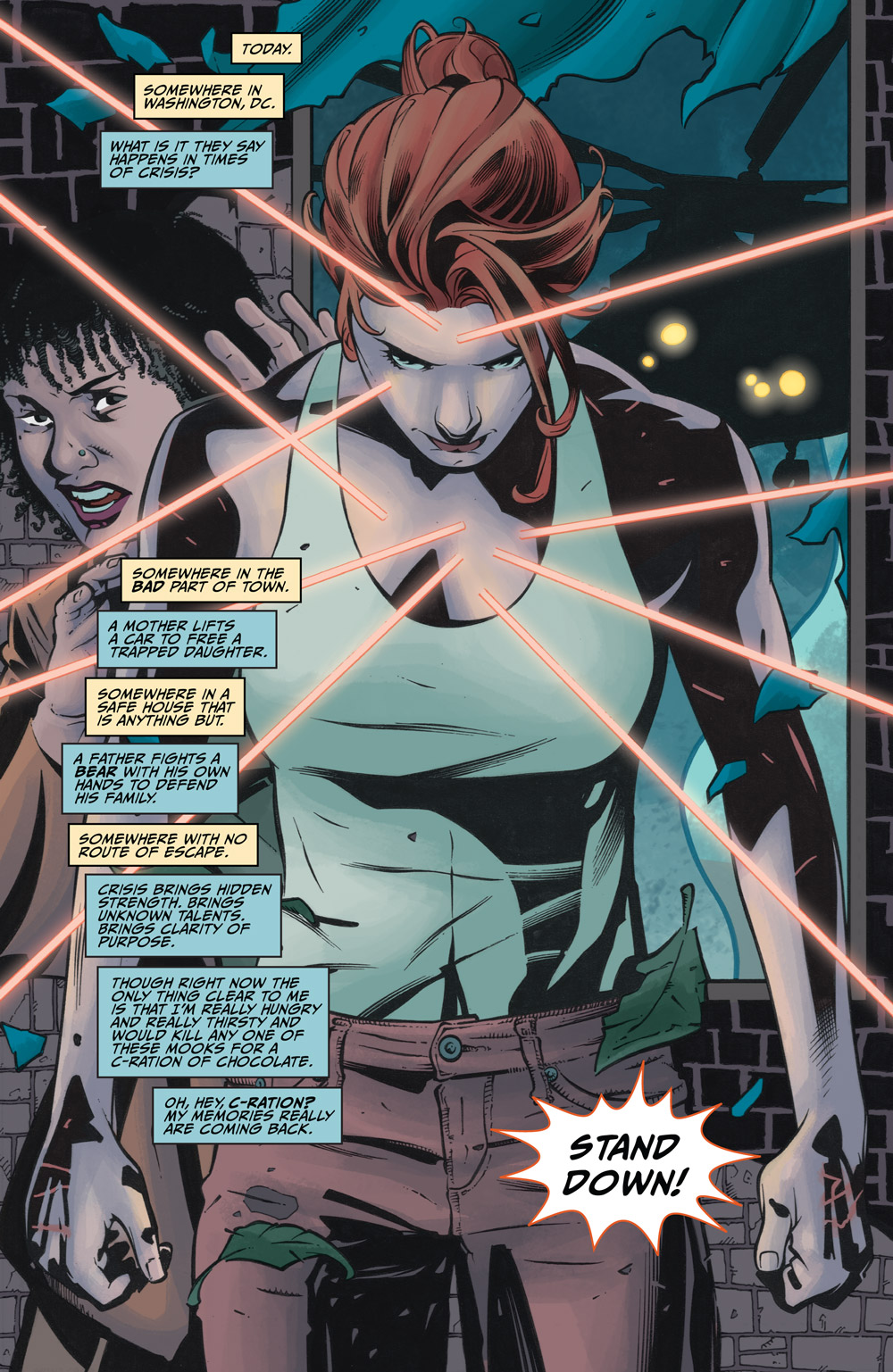 There are some issues. As soon as the book transitions to the present, we get a splash page of The Shield with random streaks of light on her body. Without any context, you don’t really know what they are and they just seem to be focusing your attention on The Shield. Fortunately, they do show us what they are in subsequent panels.

There was one issue with the lettering and I’m not sure if letterer Rachel Deering does it or colorist Kelly Fitzpatrick, but the narrative boxes switch back and forth between a beige and blue background. It is a tad confusing as that usually signals two different people, but in this case it appears to be just one.

[easyazon_link identifier=”B012HIPMYG” locale=”US” tag=”bounintocomi-20″]The Shield #2[/easyazon_link] struggles with its transitions, its dialogue, and even the narrative boxes it uses for lettering. The overall story is decent. It has a Jason Bourne vibe with an exciting chase sequence, but all too often it gets caught up with just too much dialogue that even recaps the sequences we just witnessed. There is still some promise it might be able to get off its feet with the cliffhanger, but as of right now it seems to be digging an early grave.