Takeo has arrived at The Isle with No Name in search of his brother, Akio, but what he finds is a destitute village being pillaged by Clan Nobunaga. How does it fare?

[easyazon_link identifier=”B01C89PKD2″ locale=”US” tag=”bounintocomi-20″]Samurai #1[/easyazon_link] begins with an exciting action sequence, but it struggles to find its path, not truly revealing the story until about halfway through. The main reason for this struggle is writer Jean-Francois Di Giorgio’s placement of the different events. He opens the story with a brief bit of prose to set the stage and then, instead of introducing us to Takeo, he scripts out a very compelling action sequence introducing us to a completely different warrior. It muddles up the story and makes it difficult to figure out what exactly is going on. An easy correction would have been to move the action sequence further along in the story so it aligns better with Di Gorgio’s dialogue between two of the leaders of the destitute village.

Once you get past this part and figure out what exactly is happening [easyazon_link identifier=”B01C89PKD2″ locale=”US” tag=”bounintocomi-20″]Samurai #1[/easyazon_link] becomes a much more enjoyable read. There are fun character moments with Takeo displaying his skill with the sword and even some classic foreshadowing of a seemingly inevitable contest between the two talented warriors. The character moments are also very poignant, especially when Di Giorgio focuses on the villagers. You can feel their suffering, but also their love. He truly wants you to empathize with them. 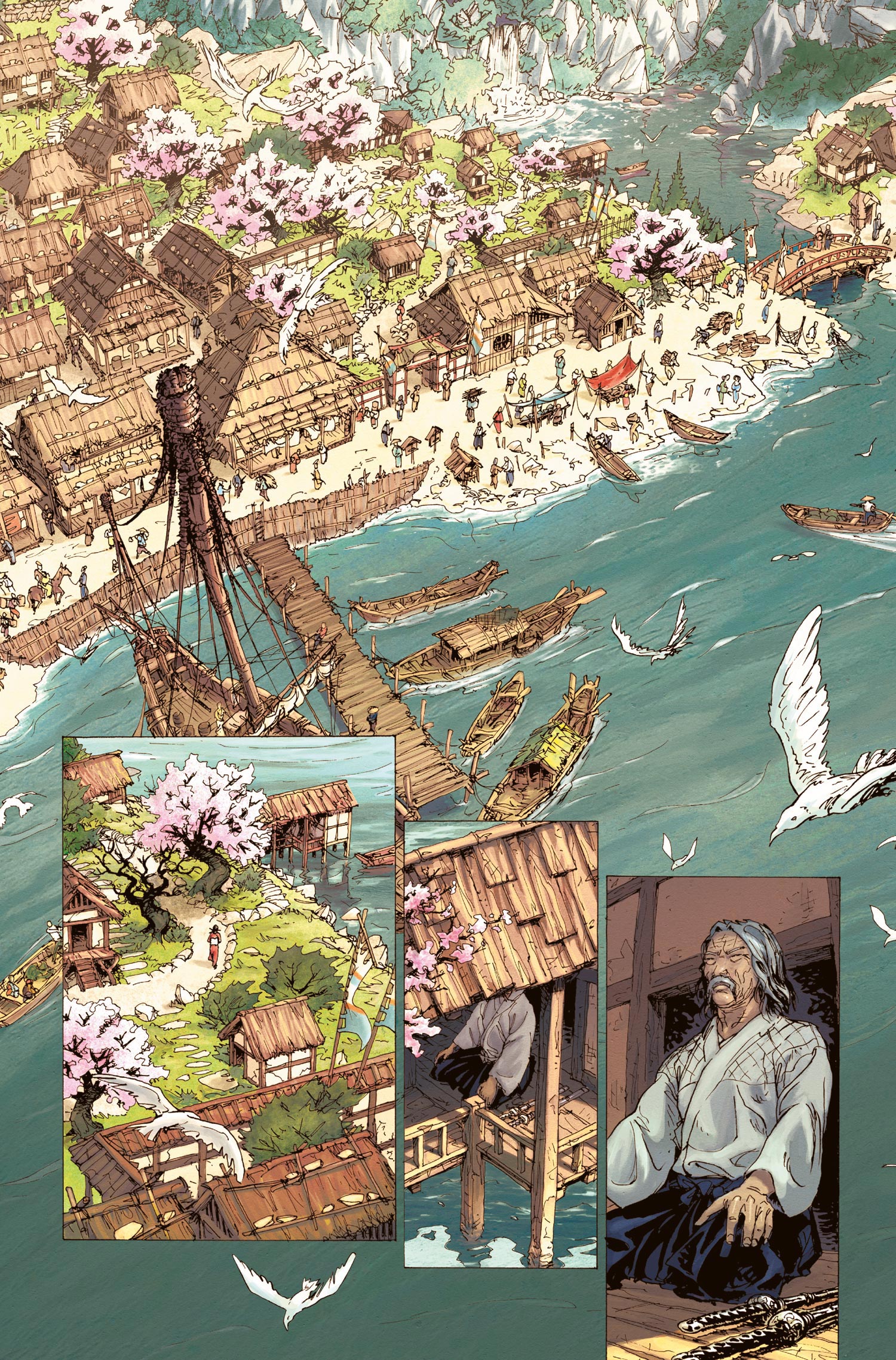 My favorite part of the story comes when Di Giorgio puts Shobei (the other warrior) and Takeo in the same room and they have a small, but friendly mental battle as they discover and show each other their talents and skills.

Frédéric Genêt’s artwork is truly majestic and has a very romantic vibe, emphasizing intense emotion whether it is the beauty of a small Japanese harbor city on the opening page or the rainy Isle with No Name when we are first introduced to Takeo. The landscapes and nature allow you to escape the hustle and bustle of the city, but also draw on the emotions with the rain evoking an extreme sadness. Genêt goes out of his way to incorporate panels fully devoted to nature and void of humans. He makes sure we see the beauty of the world he has created. There are even a number of panels where humans play second fiddle to the aesthetic of a Japanese cherry tree in full bloom.

His action sequences are tight and extremely compelling. He uses a blur technique to show motion whether it is on a character’s hands, feet, or sword. This technique quickens the pace of the book, making the swordsmen feel almost superhuman with the quickness in which they dispatch their enemies. In order to maintain this effect, he keeps the action sequences contained to less than two pages and in some cases only half a page.

As with his landscape and nature-focused panels, Genêt excels in showing emotion with his characters whether it is outrage at being run into or a completely defeated look as one succumbs to the power of the Nobunaga Clan and is forced into servitude. He focuses on characters’ facial features to show their attitudes and emotions to really let us in on who they are as characters. 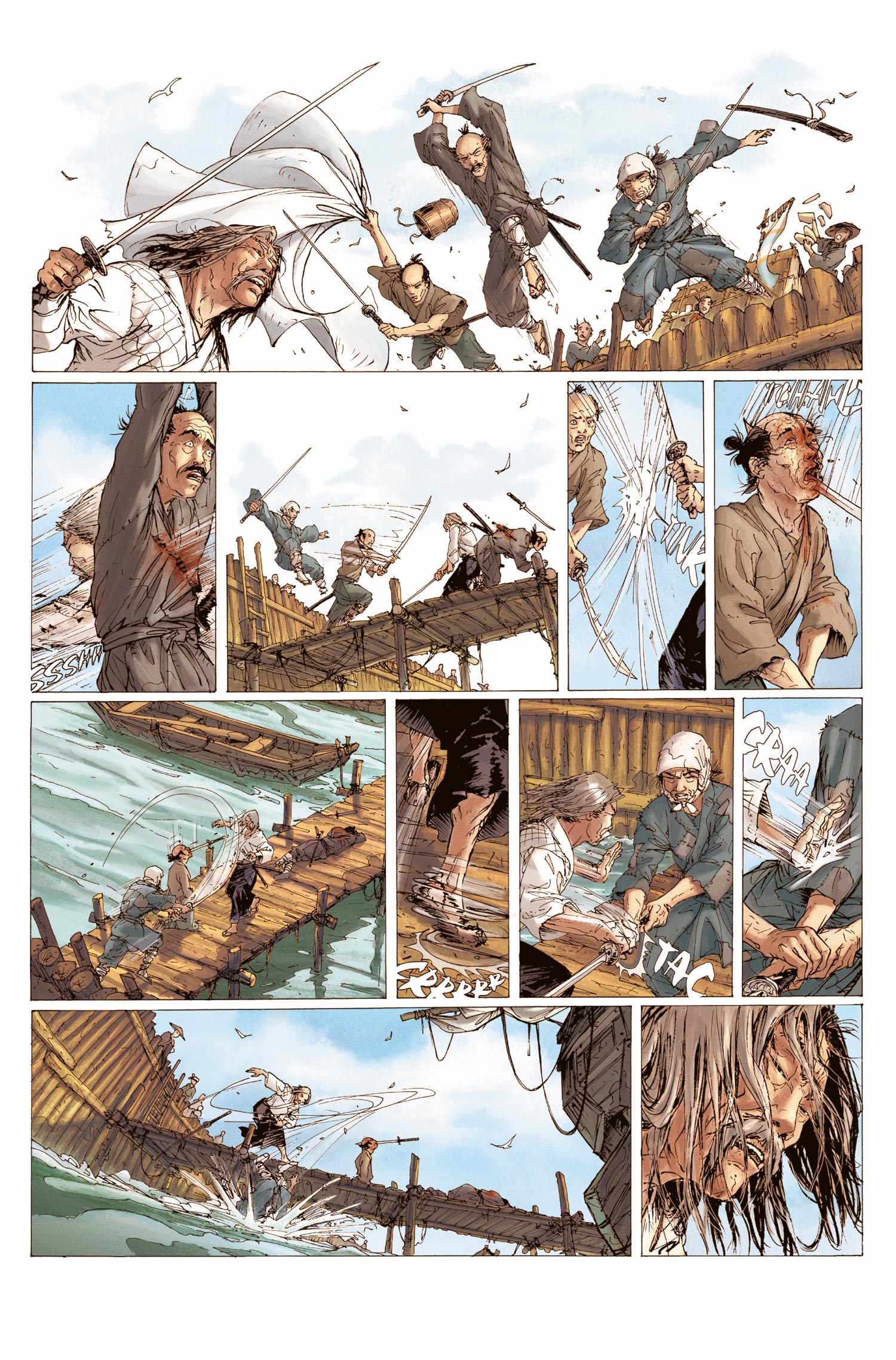 [easyazon_link identifier=”B01C89PKD2″ locale=”US” tag=”bounintocomi-20″]Samurai #1[/easyazon_link] was an absolutely beautiful story. Frédéric Genêt’s artwork is absolutely phenomenal. It makes you want to step into the comic and journey alongside Takeo to take in the beauty of the world he has created. However, there was a major issue in the beginning of the story that made it very difficult to figure out what exactly was happening. This was still a good read and I can’t wait to revisit this majestic world.