A mysterious ritual is performed, unleashing a mythical creature and a young girl learns the truth about her father. How does it fare?

[easyazon_link identifier=”B01CEUHKBK” locale=”US” tag=”bounintocomi-20″]The Shadow Glass #1[/easyazon_link] is a slow burn, character-driven issue. Writer and artist Aly Fell begins by introducing us to Master Thomas Hughes, a seemingly intrepid explorer and upstanding gentleman. However, Fell uses the small bit of information we know about him and quickly turns it on its head. The twist plants your butt firmly in the seat.

Not only does the twist come as a bit of a shock, but it also adds multiple layers to the story. There is a constant stream of questions running through your head. What are these people up to? Why is Arabella, the wife of Master Hughes’ friend, so willing to partake in the ritual? What is the ritual even about? What does she see in the shadow glass? What has taken possession of her? None of these questions are truly answered in this episode, but your need to discover the answers keeps you forging ahead.

The dialogue in this scene is quite interesting. Fell incorporates quite a bit of religious references, but it is the interaction between Arabella and Thomas Hughes which carries the day. Hughes is controlling and even manipulating at times. He ensures his ritual performer, John Dee, that Arabella is willing. However, while Arabella may claim to be willing, she also notes how she has no choice and you can even see how her tone is meant to cut at Hughes. 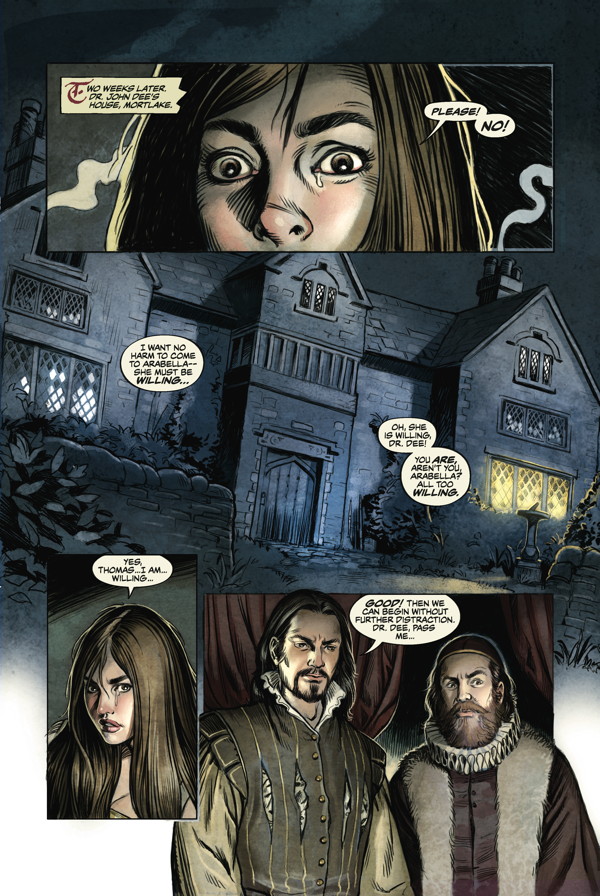 Nate Piekos does a great job of creating this tone through his lettering, although the effect he creates may not be intentional. He shrinks the font size, most likely to save room on the page. The unintended effect is the sense of a softer, more biting tone coming from Arabella and, in Thomas’ case, one that is direct and commanding, but in a soft voice.

After unveiling parts of the ritual, Aly Fell transports us 20 years into the future and introduces us to a brand new character: a fiery and adventurous young woman named Rosalind who defies cultural norms by wearing men’s clothes and carrying a sword at her side. Fell spends the rest of the story (over half of it) diving into who Rosalind is by the actions she takes, the conversations she has with her father, and eventually through a revelation given to her by her father. It gradually builds up anticipation while allowing you to really connect with the character, although at times it can get a little drawn out. There are quite a few sequences where Fell just shows us Rosalind wandering through the city and taking in the sights. While these scenes add to the world-building, they feel superfluous to the story and don’t really add anything significant.

Fell’s artwork is solid. In the second sequence she magnificently builds up tension and suspense during the ritual. You can see the sadness and almost helplessness depicted on Arabella’s face and how it quickly turns into shock as she gazes into the shadow glass. 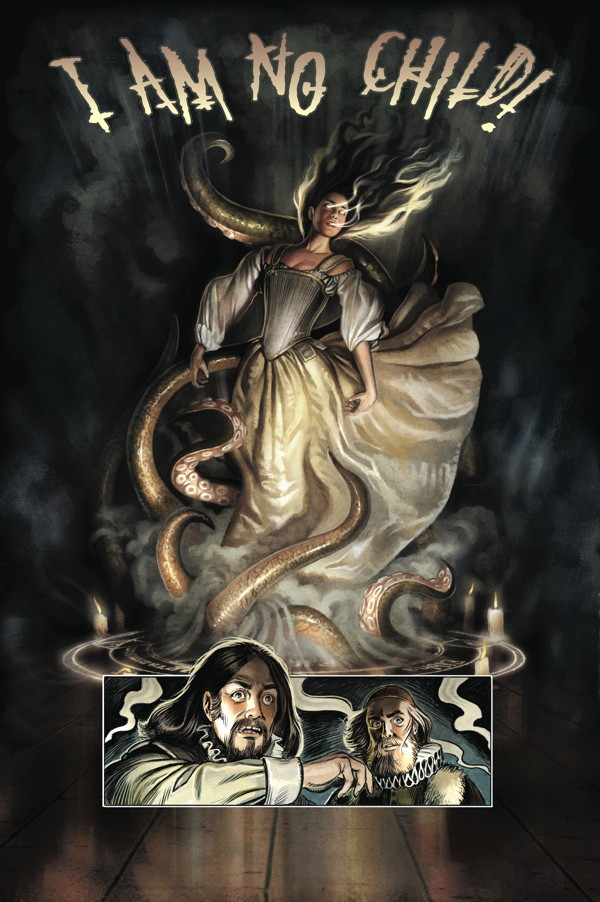 When it comes to Rosalind, Fell does a decent job of drawing out her emotions through her body language as opposed to her facial features. You can see her concern as she reaches out to her father and then her frustration as she buries her head at the dinner table. Fell really captures how much father and daughter care for each other. It is rather moving.

Aside from the strong character moments, each of Fell’s panels feels like a 16th century painting, whether it is an image of Rosalind walking towards a large estate house in the rain or when she is putting on a dress in front of the fire. Each panel has a majestic quality.

[easyazon_link identifier=”B01CEUHKBK” locale=”US” tag=”bounintocomi-20″]The Shadow Glass #1[/easyazon_link] is a character-driven story with hints of mystery and a dark ritual for a backdrop. The characterization is excellent, the dialogue is solid, and the artwork is gorgeous to look at. The book does drag on at points, but the promise of the ritual and the questions that run through your head keep you reading. If you are looking for a dark mystery, this one has promise to deliver; however, after this first issue it is still unclear what the overarching story will be.