Harley Quinn has recruited a group of unique individuals (each from a specific part of New York City) and they are taking the battle to the Hipster Mafia of Williamsburg, Brooklyn. Afterward, a search and rescue mission for Harley goes south and real trouble finds the Gang of Harleys. How does it fare?

[easyazon_link identifier=”B01D5E4350″ locale=”US” tag=”bounintocomi-20″]Harley Quinn & Her Gang of Harleys #1[/easyazon_link] begins with quite a bit of exposition, but it is solid exposition explaining why Harley is no longer in Gotham as well as her change of heart and the reason for assembling her Gang of Harleys. Writers Frank Tieri and Jimmy Palmiotti also introduce us to the Gang of Harleys in a nice character page set within the comic. The exposition isn’t just exposition; it is full of small identity jokes and even makes fun of handicapped superheroes. It sets the tone that this book isn’t holding on to any sacred cows.

And if there was any thought that it was going to have sacred cows, Palmiotti and Tieri quickly dispel that notion with the Gang of Harleys’ first mission into Williamsburg, Brooklyn to lay waste to the Hipster Mafia. Tieri and Palmiotti come up with some of the craziest yet most likely real consumer goods as the Harleys outmuscle and eventually outwit the Hipster Mafia. The writing is absolutely fantastic; there is even a monocle joke, and the finale of this scene had me dying laughing. All I can say is milk.

The jokes don’t stop with the Hipster Mafia. There are poop jokes and race jokes, but the biggest joke might be the one played on Harley and her Gang of Harleys. 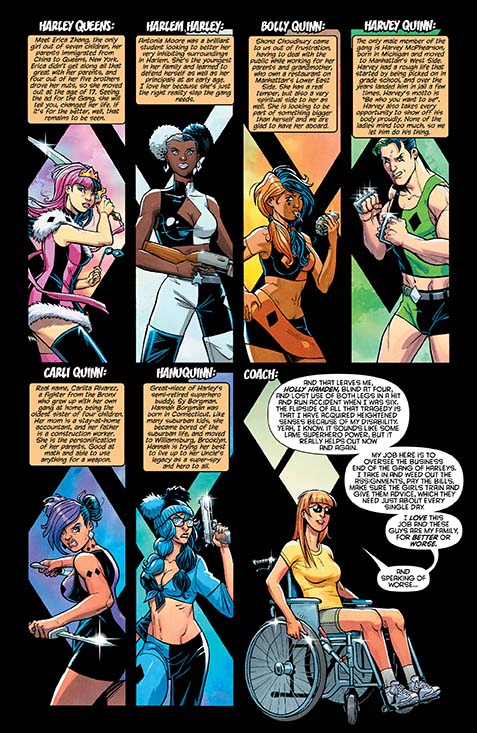 After the confrontation with the Hipster Mafia, Tieri and Palmiotti easily transition into a whole new story, almost. Harley is kidnapped and the Gang of Harleys is tasked with finding and rescuing her. You would think this new storyline might mean a more serious or dire nature. You would be wrong, although it is a different type of humor than what is used with the Hipster Mafia. It is more script-based, situational humor instead of dialogue humor.

The members of the Gang of Harleys are all endearing and each one has their own personality. Tieri and Palmiotti try to give each one plenty of their own page time but, given there are six of them, they do struggle at times. Fortunately, in the time they do give them, they are able to showcase their individuality, especially during a sequence discussing the Joker and seeing each of their reactions.

All of the characters have great chemistry together as well. Not to mention, they also are extremely similar albeit their tastes may be different. Their chemistry really keeps you intrigued and interested so much so that you almost don’t care about finding Harley, but are just content joining in on the fun with the Gang of Harleys. 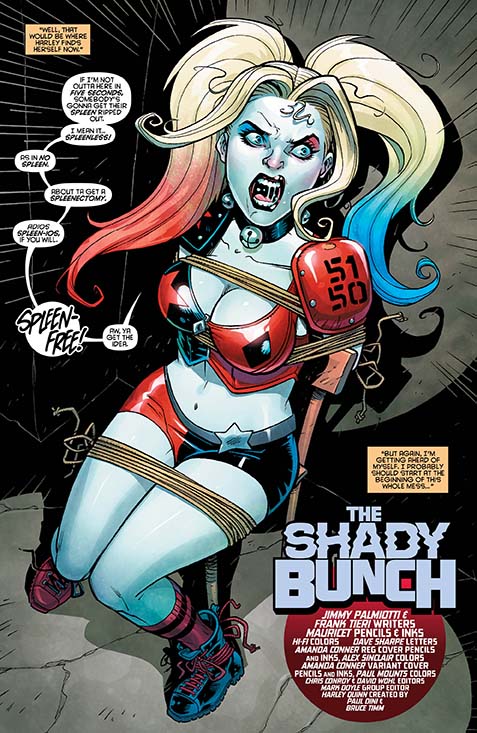 There are some characters that Tieri and Palmiotti rely on readers already knowing. They aren’t ever referenced by name. This is unfortunate because they play a small but important role in the story. It would have been nice to get a casual reference with a name drop and there were plenty of opportunities to do so.

Mauricet’s artwork is solid. The scene where Harley takes on the Hipster Mafia boss is exceptionally well done and fantastically captures the humor of the script. Mauricet is able to do a great job of using the differing sizes of the characters to incite humor. He uses Harley’s small stature against the Hipster Mafia boss’ massive physique to expertly pull off some great humor.

There are some minor issues with the artwork. One in particular is when Harley Queens, one of Harley’s Gang, is interrogating a local hipster. Her eyes and face in general appear to be looking past him rather than at him. It makes the interrogation lose its effect. 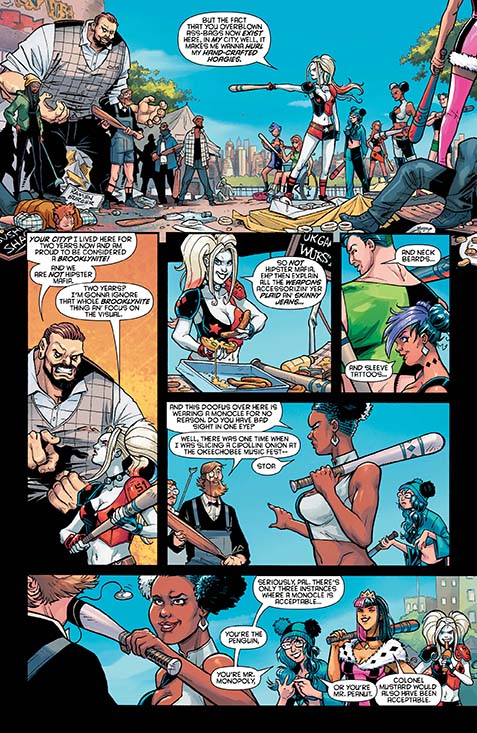 [easyazon_link identifier=”B01D5E4350″ locale=”US” tag=”bounintocomi-20″]Harley Quinn & Her Gang of Harleys #1[/easyazon_link] is a laugh riot from start to finish. Jimmy Palmiotti and Frank Tieri make an excellent pairing, providing different kinds of jokes throughout the issue. They also craft a compelling and serious story by the end of the issue that will have dire consequences for Harley and Her Gang of Harleys. Mauricet’s artwork is solid and excels in situational humor and makes many of the jokes hit even harder. Go out and buy this one. The only thing that will be regretting it is your stomach from all the laughs.