Dynamite Comics has tapped Michael Uslan and Giovanni Timpano to bring together the Lone Ranger and Green Hornet in a six issue miniseries beginning this July!

Here is the official solicitation:

A tale of super-heroics and family that has taken eighty years to be told! This first chapter, entitled “Those Thrilling Days of Yesteryear,” creates a world of carefully researched alternative history in 1936 as we learn whatever happened to The Lone Ranger and discover his familial link to the emergence of a man who is a modern day urban version of The Lone Ranger himself. What is the blood connection of The Green Hornet to The Lone Ranger? What is the link of Olympic runner Jesse Owens to The Green Hornet? What role does Bat Masterson play in The Lone Ranger’s New York adventure? What intense rift tears a family apart just when America desperately needs a great champion of justice? The shocking answers lie in the historic first issue of “The Lone Ranger Meets the Green Hornet: Champions of Justice!” 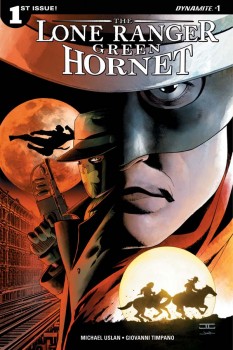