Michael Moreci and Kyle Charles continue to explore the characters and themes they introduced in the previous two chapters of Roche Limit, and take it one step further to examine what makes humanity unique in the universe. How does it fare?

[easyazon_link identifier=”B01C9EH9PI” locale=”US” tag=”bounintocomi-20″]Roche Limit: Monadic #2[/easyazon_link] is definitely a high concept book. It’s also a single issue that is just a piece of a larger story. The story primarily takes place within a city center, but does give us a glimpse into a remote lake house. Both locales take Alex, Sasha, Sonya, and Bekkah on a journey that questions what their senses are telling them is real. They begin to question whether or not the reality they are experiencing is actually real. It feels a lot like the Matrix.

Moreci’s script, as in the previous chapters of Roche Limit, continues to build suspense and mystery as it progresses. As the reader, you feel just as confused as a number of the characters, but as the story moves forward you begin to put the pieces together to get a real feel for what is happening.

One of the main sources of the confusion is the fact that the story jumps around a bit. It begins with Alex in a subway terminal and then switches to Sasha at the lake, and then back to Alex, and then to Sonya in a laboratory, and finally back to Alex. These jumps add to the confusion by just plopping you into the scenes without easing the transition or providing any notice of transition. 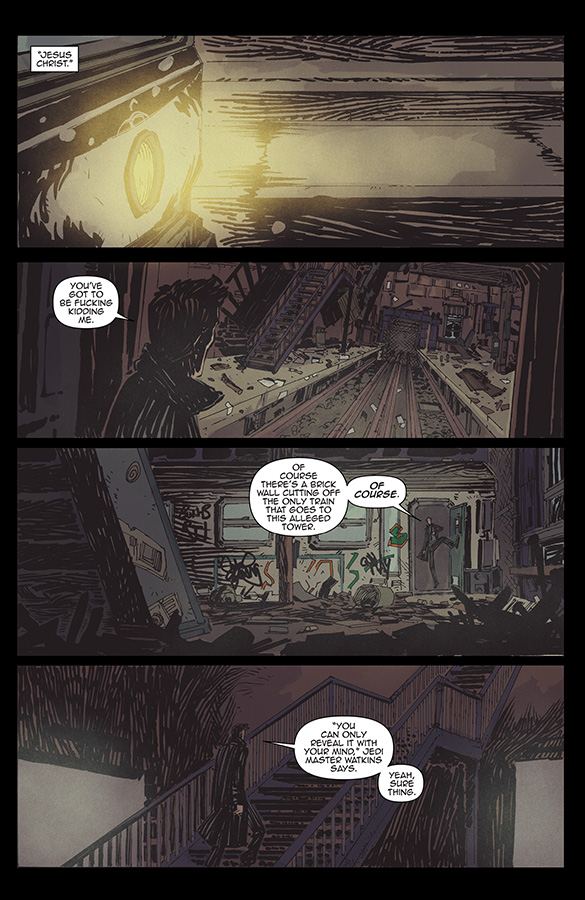 One of the highlights of the Roche Limit trilogy has been Moreci’s ability to combine complex philosophical questions, murder-mystery investigative work, and high-flying action. All three of these components are on full display in this issue. Alex Ford tracks down the path to the Black Tower while being pursued by the alien beings that have taken on the persona of Alex’s old foe from the first book, Moscow, although he isn’t mentioned by name. All of this is happening under the guise of figuring out what is or isn’t real and what makes humanity so unique.

The artwork by Kyle Charles is absolutely stunning. His depiction of the Black Tower with its swirls is not only a touch terrifying, but also a little psychedelic, reinforcing the confusing nature of the story. He is also able to flawlessly switch gears from the dark, almost evil cityscape to the more isolated, barren lake scene.

The action scenes are intense and extremely graphic. Not only does Charles provide a shocking splash panel, but he adds two inset panels to really hit home the carnage that is being depicted. Those inset panels give you a close-up of the victim’s eye and then the point of impact. It really adds gravitas to the panel.

I also really enjoyed Charles’ vehicle design. He takes a Mustang and combines it with a Charger to give it a real muscle car feel. It’s exciting and adds to the chase sequence, imagining how fast that vehicle can go. 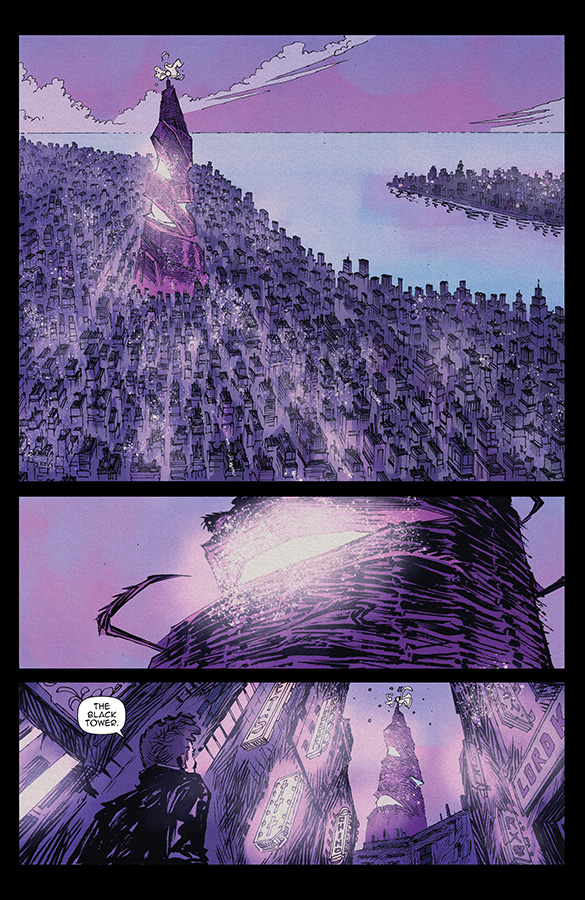 [easyazon_link identifier=”B01C9EH9PI” locale=”US” tag=”bounintocomi-20″]Roche Limit: Monadic #2[/easyazon_link] is another solid entry from Michael Moreci and Kyle Charles. It has what you have come to expect with critical thinking questions combined with high flying action and plenty of character drama. The book does struggle with its transitions and can be a little confusing to really figure out what is happening. A rereading of the first issue and even the first two Roche Limit books might be a necessity. I’d pick this one up if you are a fan of the series. However, it might be a little difficult to jump into without any background.