A young boy lets his imagination run wild as he ventures into the forest on a merry adventure. While, a young girl gets creative as she searches for her missing father. How does it fare?

If you don’t know, Over the Garden Wall was Cartoon Network’s first ever original animated miniseries. BOOM! Studios has tapped show writers Jim Campbell and Amalia Levari along with artist Cara McGee for a new, ongoing series in the universe; [easyazon_link identifier=”B01DHLK3BE” locale=”US” tag=”bounintocomi-20″]Over the Garden Wall #1[/easyazon_link] contains two original short stories. The first features Greg and Wirt as they journey to Dreamland with the second taking us to the early days of the Unknown where Anna, the daughter of the Woodsman, must learn to live on her own.

The first story, featuring Greg and Wirt, is a delightful short where Greg ventures into Dreamland chasing after Sheriff Funderberker. Greg’s adventure provides plenty of hilarious moments as Greg, with childlike curiosity, learns some lessons the hard way.

Not only is the story delightful, but the dialogue when Greg runs into a couple of elves is a riot. The back and forth between the elves as they discuss their predicament will put a smile on your face if not have you spitting out your drink in laughter.

The artwork here definitely has the Cartoon Network design the station has come to display over the past couple of years. The characters are for the most part very round in their midsections and have ears, noses, and eyes of all shapes and sizes. Some of the characters even have bad teeth. However, it captures the moments perfectly. When Greg is spitting up, you will be spitting up as well. The art complements the punch lines perfectly. There is also a wondrous moment where we see the entire plane of existence transition into Dreamland. It happens so seamlessly you might miss it.

The story is an absolute delight that you won’t want to miss. 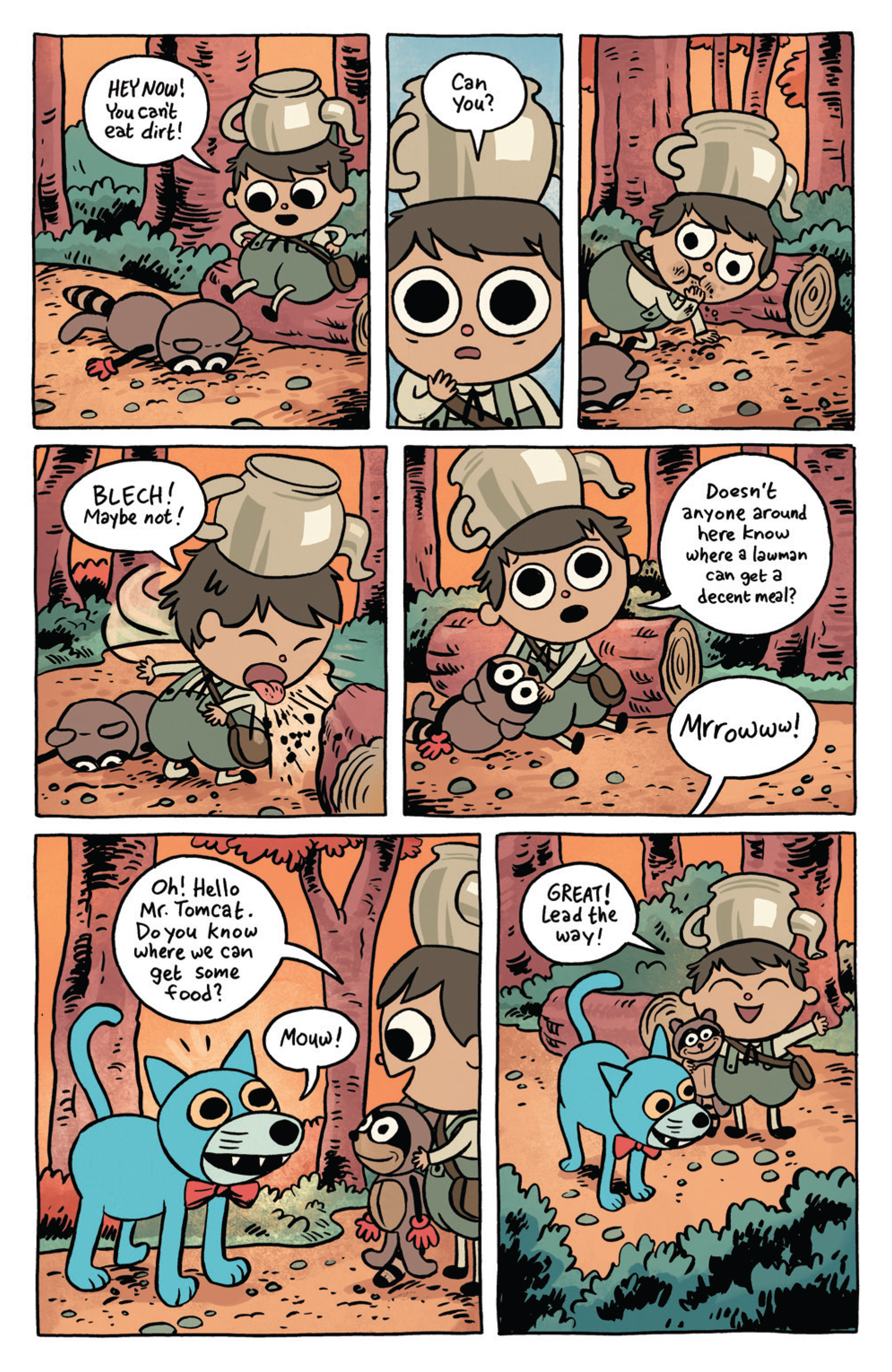 The second story, featuring Anna, is very different with a drastically darker tone from Greg and Wirt’s adventure. Albeit nothing too dark. This is made abundantly clear with the darker color palette as well as creepy lettering. Anna has lost her father and is struggling to survive on her own in the woods.

The story depicts her attempting to cope without her father, while also holding onto hope that he may just return. It takes us through a range of Anna’s emotions including despondent, fearful, industrious, excited, curious, depressed, and hopeful.

While the characterization of Anna is nice, the story doesn’t really move you or do anything for you other than show you what Anna does while her father is missing. It’s a cute, surface level story about Anna, but that is all you are getting.

The art does open up plenty of opportunities for Anna moving forward as her curiosity does allow us to see what is happening around her home. Unfortunately, we don’t ever get to really explore those areas as Anna confines herself to the house. McGee’s artwork does a great job of capturing Anna’s various emotions. You can see the joy in her smile or the depression seeping in as she pulls her knees to her chest and huddles in her bed.

The story does what it sets out to do by showing us a day in Anna’s life, and how her mood changes and what she has to do in order to survive alone. Unfortunately, it doesn’t move you one way or the other. Anna’s constant shifts in mood also hamper your ability to really connect with her. 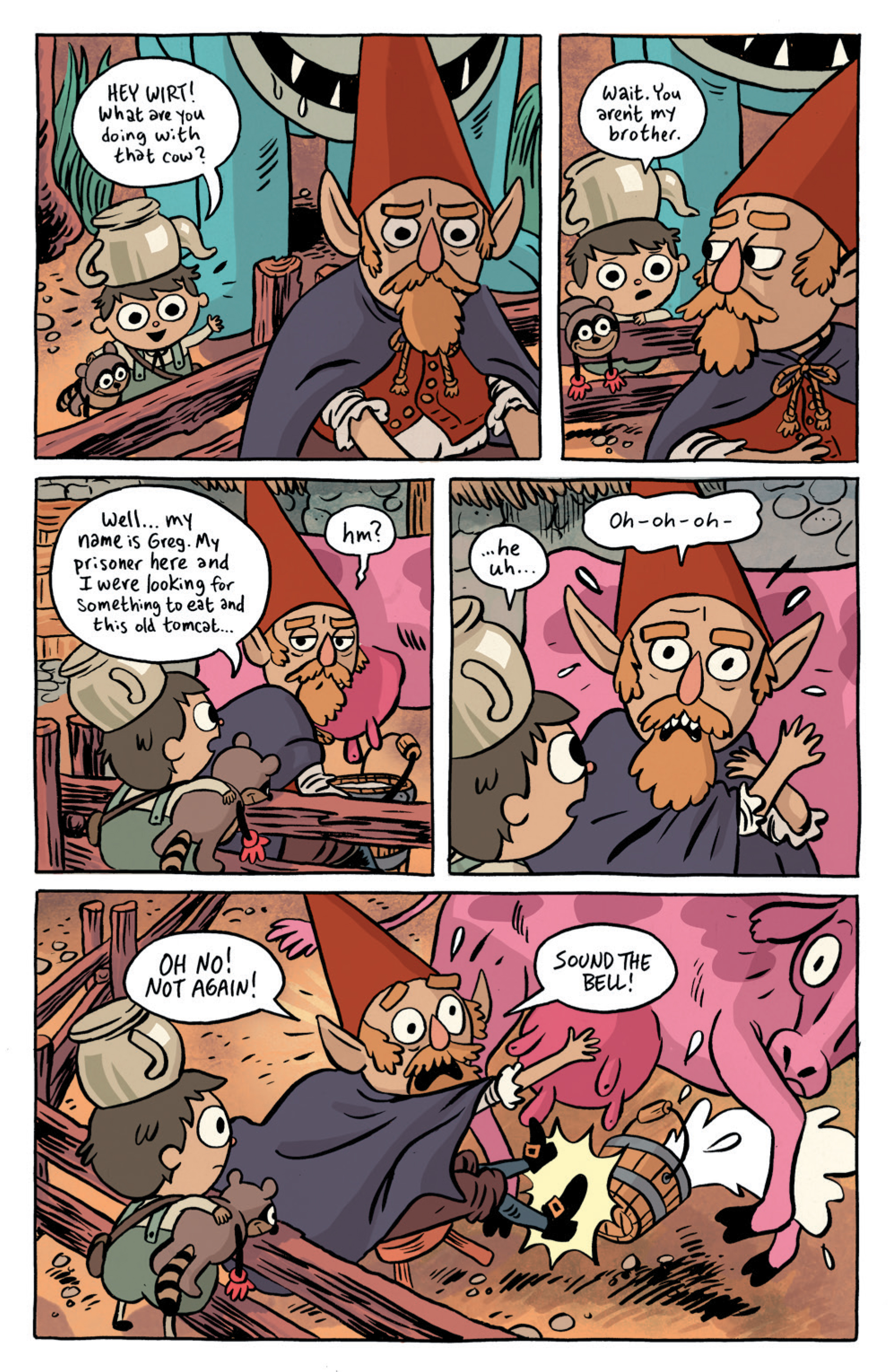 [easyazon_link identifier=”B01DHLK3BE” locale=”US” tag=”bounintocomi-20″]Over the Garden Wall #1[/easyazon_link] has one standout story featuring Greg and Wirt that makes it worth picking up. Greg’s story has you laughing as you get lost in his imaginary adventure. Unfortunately, the second story doesn’t live up to the first one. Anna’s character feels distant and there doesn’t really seem to be a purpose or goal to her story other than to show what she is up to. Don’t get me wrong it isn’t a bad story just not as entertaining as the first. And the first story is well worth picking up the entire issue especially if you plan on reading with your kids.