“I can’t stop thinking about him. It’s almost like I can see him right in front of me sometimes…but then he’s gone.”

Ray Fawkes has been an incredible writer for DC in the past few years. Rarely having a title to himself, he’s replaced troublesome writers or worked steadily on weekly series. Then came Gotham by Midnight. His amazing work on that series created one of the best new titles for a main publisher in this century. Ben Templesmith and Juan Ferreya’s art elevated the series to new heights. Since then, Fawkes has been closely connected to the magical part of the DC Universe.

Ragman #1 is his latest foray into the depths of DC’s magical catacombs. Combining a horror story with a modern day soldier’s struggle with PTSD, Fawkes creates an interesting premise. Ragman is one of the more intriguing, but lesser known characters in the DC Universe. Because of that, Fawkes and artist Inaki Miranda are able to take creative freedom with the story and run with it. Their’s is an imperfect world of horrors both mystical and modern. 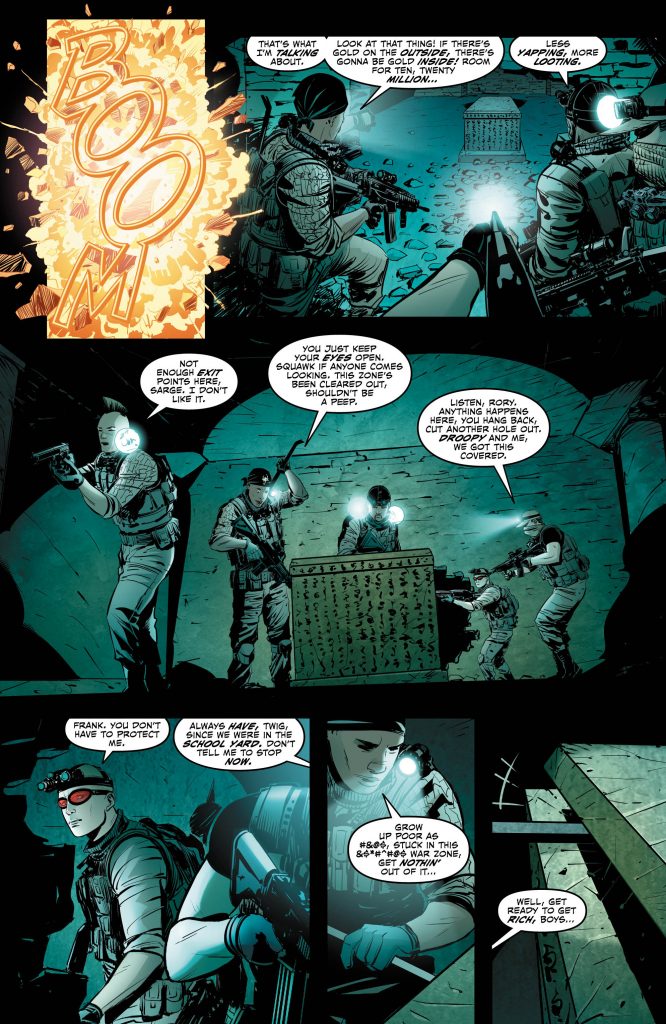 More Than a Feeling

Rory’s seeing things. A mixture of both mercenary and soldier, Rory has been having nightmares unlike anything seen before. The atrocities he witnessed when at war are his to bare, and with good reason. He wasn’t a member of any military. He was a tomb raidering, grave robbing gun-for-hire. The monsters that haunt him at night do so because of his lies.

Rory visits with the family of the lost, only to be reminded of the lies that put them in the ground. Ray Fawkes is making the protagonist both relatable and unique. Rory’s introduction to the Ragman side of things is a little fast, but it’s undeniably fun. His penchant for war makes him immediately drawn to a nearby fight. Willing to use anything in his arsenal Rory quickly puts his new powers to use. It cuts to the chase fairly quickly but Ragman #1 makes great use of its pages.

Miranda’s work on Ragman #1 is a visceral mix of horror and realism. His designs on Ragman resemble Tradd Moore’s work on Ghost Rider. A uniquely different approach on a classic character. One that makes excellent use of the past while crafting an almost unrecognizable character. Eva De La Cruz’s colors are also very striking. 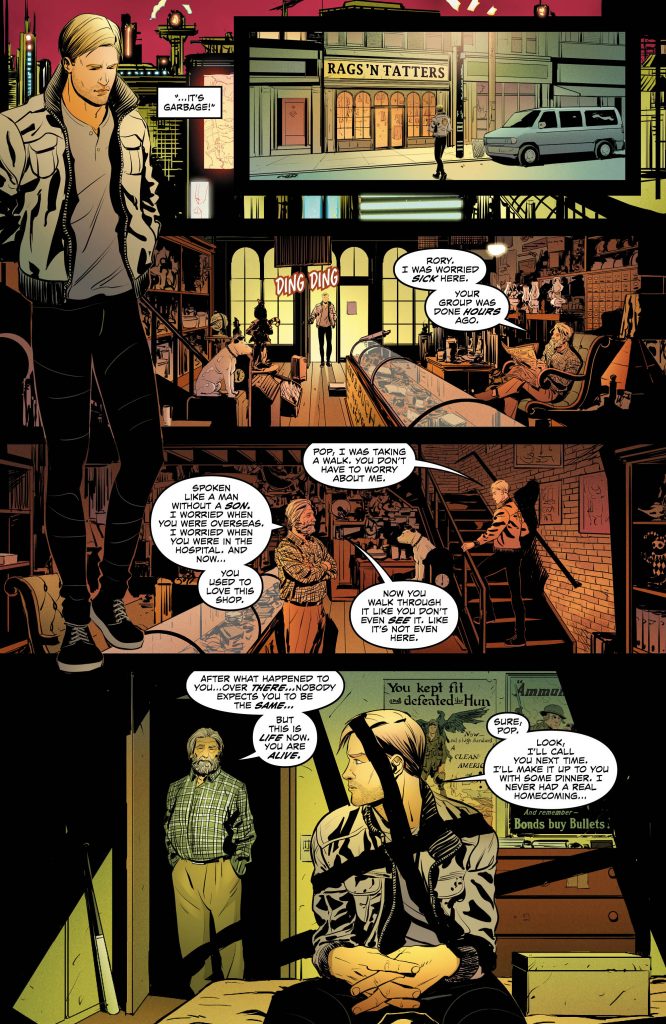 The DC Universe has two particularly awesome aspects for colorists. The world of the Green Lantern Corps and the underworld of magic. Here, Cruz makes great use of the dark alleyways and bright costumes. Together, she and Miranda have made an eye-catching entry into the mystical world of DC.

Ray Fawkes has a bit of magic in him. The stories he creates have inventive uses of the dark corners of the world. He’s been able to create amazing stories that mystify and entertain. Ragman #1 is no different. With Inaki Miranda on art, Fawkes has created his most mainstream glimpse of the many cards up his sleeve. With a not-so-simple soldier trying to get through his everyday, Fawkes is giving us yet another mini-series with great potential.

The first issue hits the ground running, introducing the characters to each other as quickly as they’re introduced to the audience. A little jarring at times, but does little to get in the way of the excitement there is to be had. Fawkes and crew may only have 6 issues but the story is off to an adventurous start.