Fox’s upcoming film featuring the Ragin’ Cajun, Remy Lebeau, may feature a big bad we weren’t really expecting. At least with all the rumors and casting news and directorial searches we’ve been hearing over the last two years since the movie was first announced for development.

A few weeks back we were lead to believe Mr. Sinister would be the ultimate bad guy for the first feature film. Daniel Craig is supposedly in talks to play Mr. Sinister, Nathaniel Essex, and the rumor mill of the internet went crazy about his role in future X-Men films, Gambit aside. The film was in development hell for quite a while and just found a director in Gore Verbinski of Pirates of the Caribbean fame, and was given a tentative release date of February 2019. Yet just yesterday in a report from Omega Underground we are told the film will feature a female villain in the form of Candra the Benefactress. 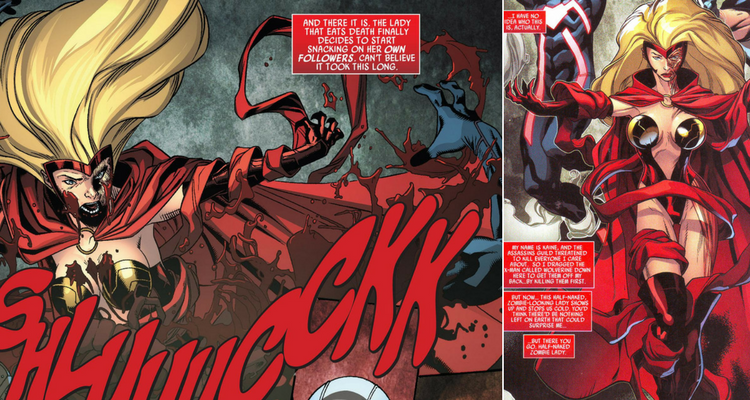 Candra the Benefactress, a.k.a. the Red Death is a literal immortal. Her dealings on earth have been secretive. She’s been  manipulating on a global scale for thousands of years. Hers is a sort of power play, at times working with other immortal beings and at others working in opposition to eventually steer control of the planet’s future in her direction. Amongst their run-ins over the years she has encountered En Sabah Nur (Apocalypse) and his one-time associate, Nathaniel Essex (Mr. Sinister).

Candra is also a powerful telekinetic. Her dealings with the thieves guild of New Orleans ties in with Gambit’s past as a member. Her involvement with Apocalypse and Nathaniel Essex also ties in with Gambit in that each has had a hand in shaping the tormented past of Remy Lebeau, specifically with Sinister in his formation of the Marauders. In that part of Remy’s life, he was responsible for the massacre of the Morlocks, a society of mutants living in the underground tunnels of New York City.

Recently Fox and their Marvel production team has been learning lessons from the box office. Successful films that have deviated from the normal super hero film have been blueprints for how they sculpt future projects. Logan was a dystopic western. X-Men: Days of Future Past was a time piece/dystopian picture. X-Men: First Class was a pure time piece. Even Legion, a mind-trip of a series, is having success because it isn’t a typical superhero versus a bad guy, but an OP main character facing off against his literal inner demon. Let’s not forget to mention X-Men: Age of Apocalypse, and Wolverine: Origins. It seems FOX studios has learned from their failures as much as with their successes.

Fox appears to be showcasing their learnings with The Gifted, which looks to be like a sort of season two of Prison Break. The New Mutants also looks like a teen horror movie, except the antagonists of the film may very well be the teens themselves. Future films may also follow this blueprint for further box office/television ratings success.

The future Gambit movie will have an Ocean’s 11 feel to it. The only problem is that we’ve kind of had that already with Ant-Man. The tone of the movie, at least in my opinion, needs to feel more like Mission: Impossible. Or even more like The Thomas Crown Affair. A more serious, adult film will gather a larger audience to the theaters, as Deadpool and Logan have demonstrated.

It’s unclear how Candra will play out in the success of the film and her larger role in the X-Universe. But it’s nice to see some more news coming out from the Gambit film. Hopefully this means it’s finally out from the production limbo it was previously in.