Thor: Ragnarok hit theaters like a thunderbolt over the weekend! With an opening of over $121 million domestically, Thor not only is going to shatter the enemies of Asgard, but also some record books.

While Thor might be tossing around the enemies of Asgard, one character who didn’t make the final cut for Thor: Ragnarok was Beta Ray Bill. Although we did get a nice Easter Egg in return.

In an early cut of the film, Beta Ray Bill made a small cameo. Unfortunately, in the editing process the cameo just didn’t make it. We were left with only a reference to Beta Ray Bill welded on the side of Grandmaster’s Tower. You can see Beta Ray Bill on the left of the tower. 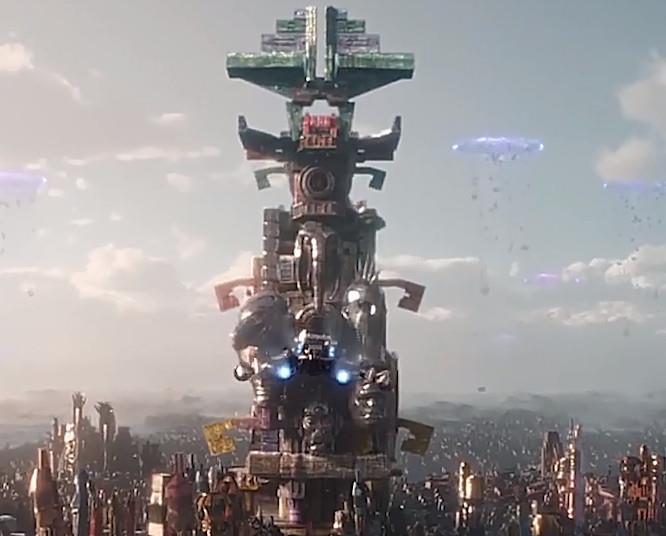 It was a nice gesture, but it left many of us wanting more.  Why didn’t Beata Ray Bill make it into Thor: Ragnarok? Well, Kevin Feige, head of Marvel Studios dished on why Beta Ray Bill was cut. In an interview with Carve Online, Kevin Feige went on to explain that the timing needed to be right, and right now it wasn’t. He goes on:

There was a Beta Ray Bill, but it was so quick that you would have the same complaints that you have now. He was in it a little bit more and it just didn’t do justice. And the feeling is, if you can’t do it justice, do it later.

There you have it. Beta Ray Bill didn’t make the final cut, because the cameo didn’t do the character justice in the minds of the top brass at least. However, with Avengers: Infinity War and the upcoming Avengers 4 film on the horizon, the possibility of seeing Beta Ray Bill on the big screen. We know he is out there in the Marvel Cinematic Universe and was presumably the Grandmaster’s Champion at one point. Who knows he might be the key to Thor recovering his hammer, Mjolnir.

How would you like to see Beta Ray Bill make his debut in the Marvel Cinematic Universe?  Let us know in the comments below!