Justice League’s Rotten Tomatoes score leaked early and as with past DC Films with the exception of Wonder Woman, the initial results are not pretty.

The movie currently sits at a 48 percent rating according to a screen shot posted by a Reddit user. 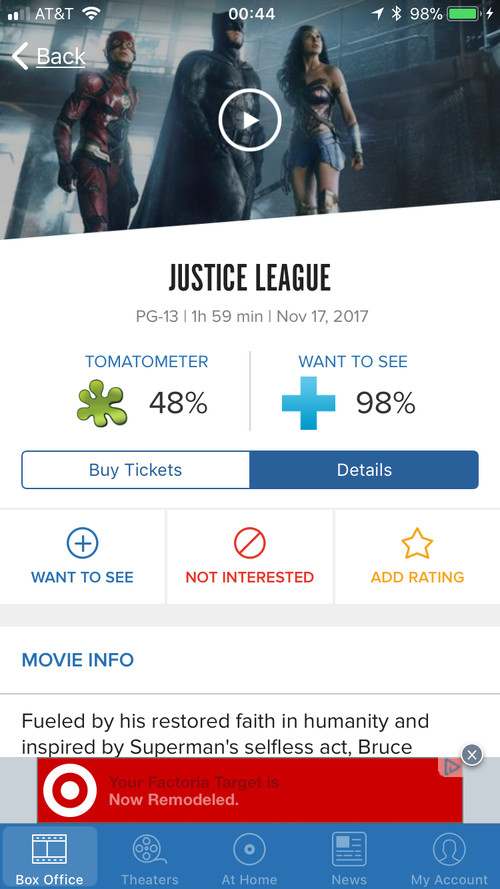 It’s not entirely clear when this screen shot was taken, so it’s possible when Rotten Tomatoes goes live with their official score it could change. Rotten Tomatoes originally announced they would not release the score until initial viewings of the film began on Wednesday evening.

While the 48% percent rating might look bad to many, it’s nearly double the score from Batman v Superman: Dawn of Justice which received a 27%. You also have to remember this is a critics score. Personally, I never place any value in the critics score and look more towards the audience score. In fact, Batman v Superman: Dawn of Justice received a much higher audience score with 63%.

The leaked Rotten Tomatoes score does come close to Metacritic’s overall 51 score. This midway score indicates it might be a love or hate it type of film.

Richard Roeper at the Chicago Sun Times gave the movie a high mark with an 88. He describes the movie as “a putting-the-band-together origins movie, executed with great fun and energy.”

On the other end of the spectrum, Todd McCarthy at The Hollywood Reporter gives the movie a 30 describing it as “garishly unattractive to look at and lacking the spirit that made Wonder Woman, which came out five months ago, the most engaging of Warner Bros.’ DC Comics-derived extravaganzas to date, this hodgepodge throws a bunch of superheroes into a mix that neither congeals nor particularly makes you want to see more of them in future.”

And in the middle is Chris Nashawaty’s review at Entertainment Weekly. He scores Justice League as a 58 and describes it as “better than its joylessly somber dress rehearsal, Batman v Superman: Dawn of Justice. Now the ‘but’ …you knew there was a ‘but’ coming right? But it also marks a pretty steep comedown from the giddy highs of Wonder Woman.

Regardless of what the critics say, I’ll still be going to see Justice League this weekend. The film comes to theaters on November 17, 2017.

You can catch Ben Affleck as Batman, Gal Gadot as Wonder Woman, Henry Cavill as Superman, Ray Fisher as Cyborg, Jason Momoa as Aquaman, and Ezra Miller as The Flash in Justice League.