About a dozen Avengers: Infinity War images leaked online. The images give us shots of Vision, Scarlet Witch, Drax, Falcon, Black Widow, and Captain America. There are also a number of shots of a truck exploding. However, probably the biggest thing from these leaked images is our first look at one of Thanos’ lieutenants, Proxima Midnight. 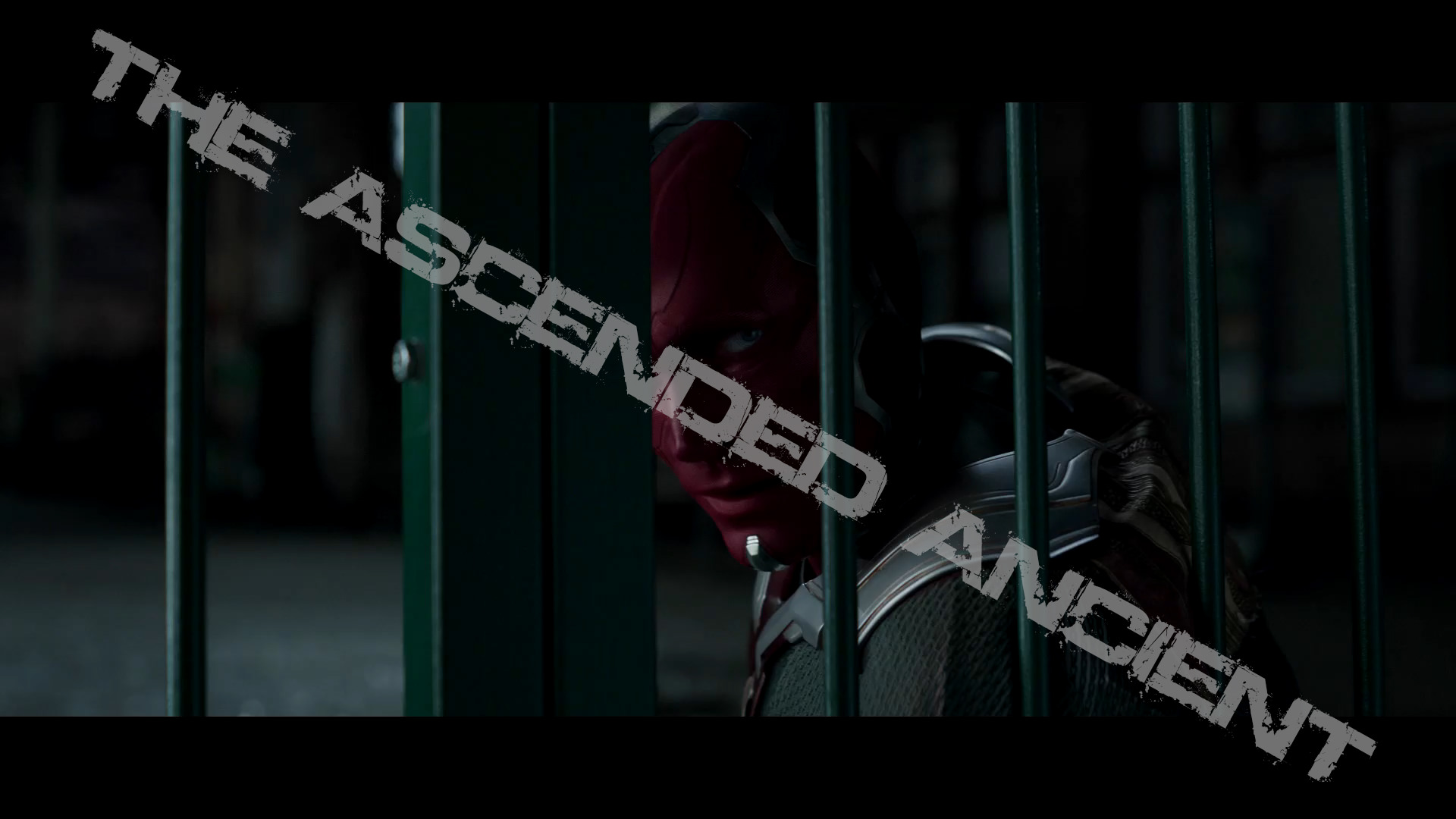 This first image is of Paul Bettany’s Vision. Our favorite android looks to be in a world of trouble. We know Thanos and his minions will be hunting for the Infinity Stones and Vision carries the Mind Gem. It’s impossible to tell if he still carries it in this photo due to the jail cell, but it’s more than likely he’s been captured by Thanos and his minions. Whether or not they have extracted the Mind Stone yet remains to be seen.

Next up we get what appears to be a high flying action scene with Elizabeth Olsen’s Scarlet Witch. She appears to blow up a truck Denton Construction truck. However, based on the second image where she is doing her best Neo impression from the Matrix, she might actually be trying to contain the explosion like she did in the opening scenes of Captain America: Civil War. Regardless, it looks like we are definitely going to get some awesome Scarlet Witch scenes in Avengers: Infinity War. 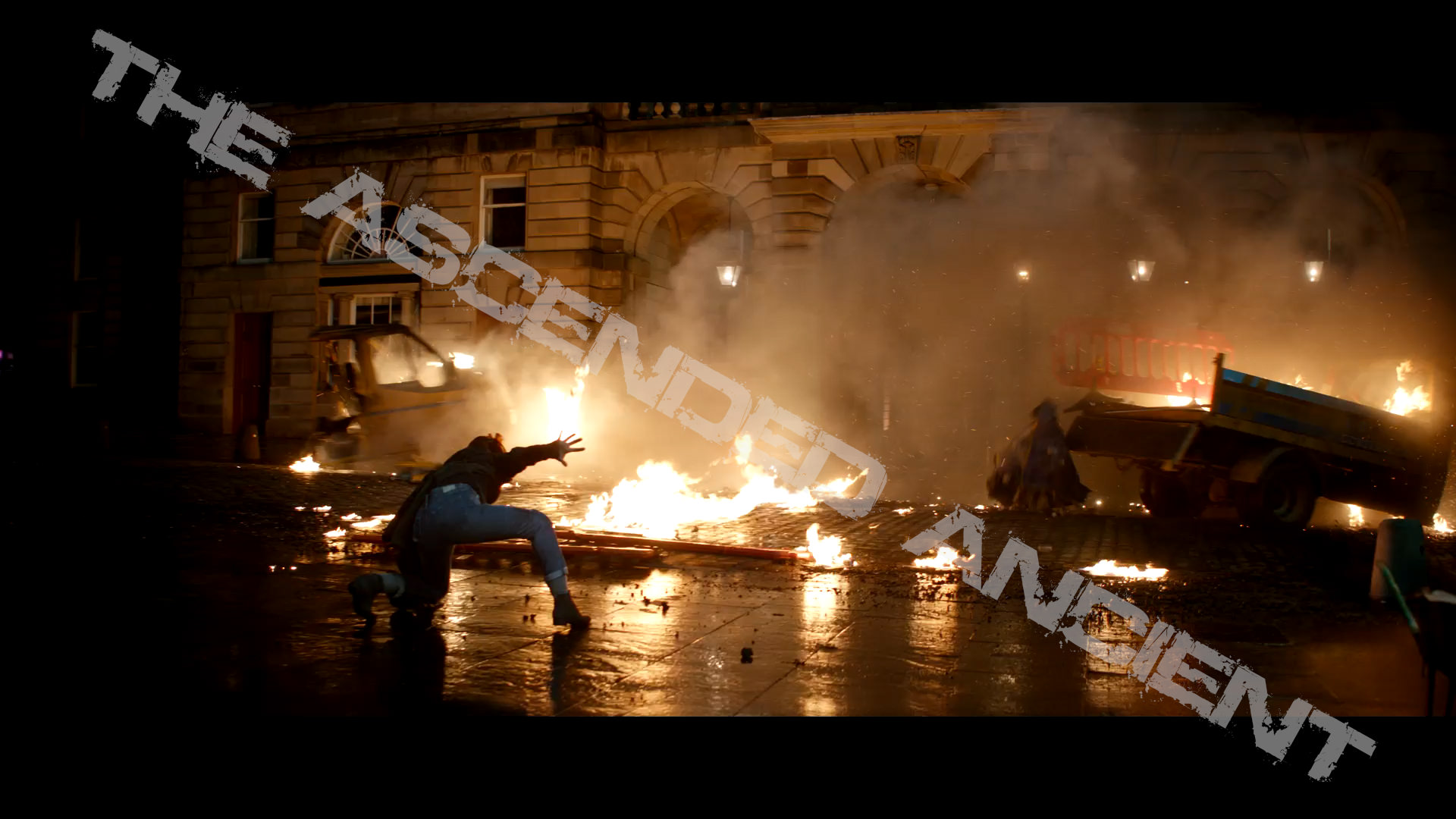 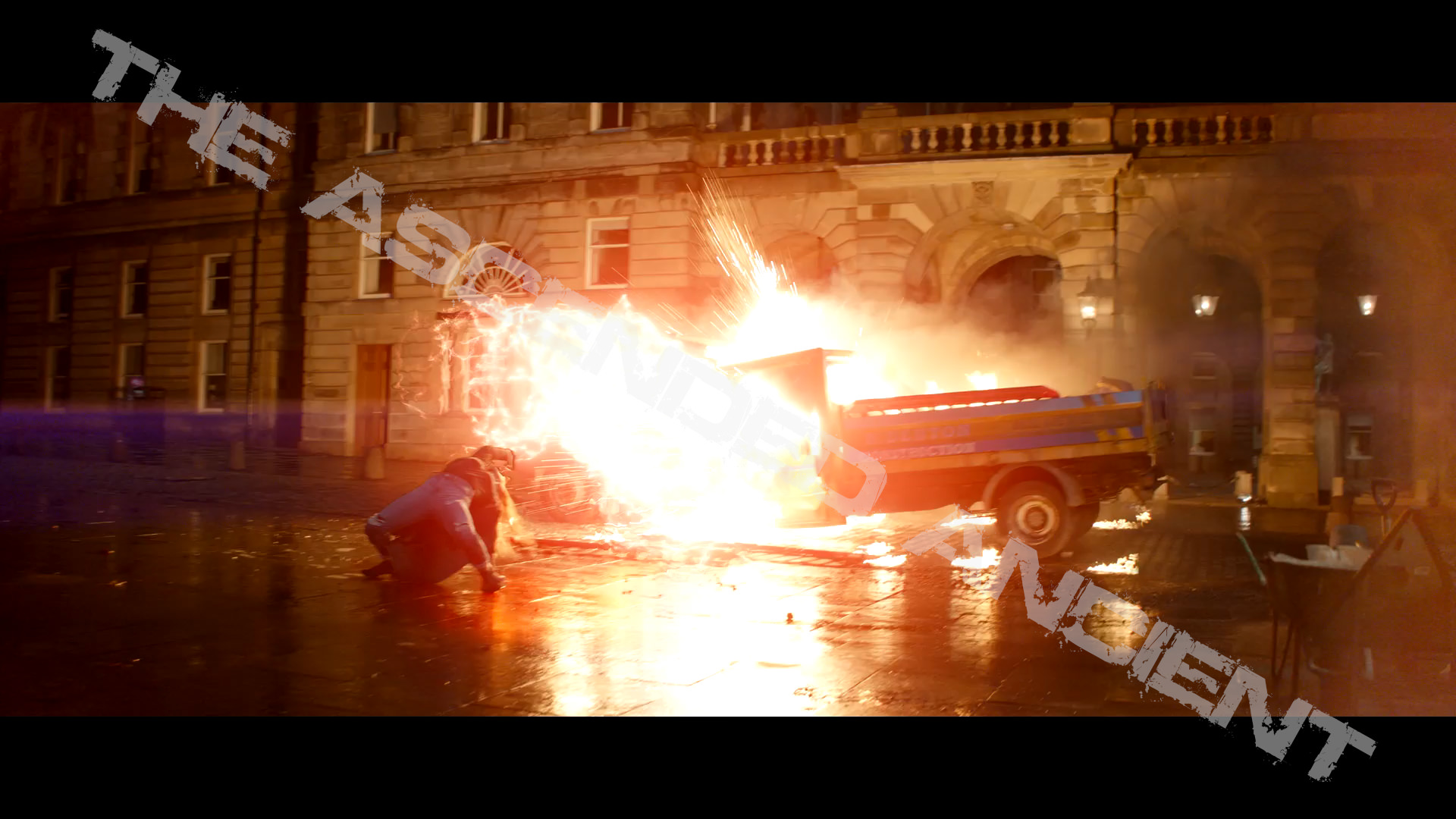 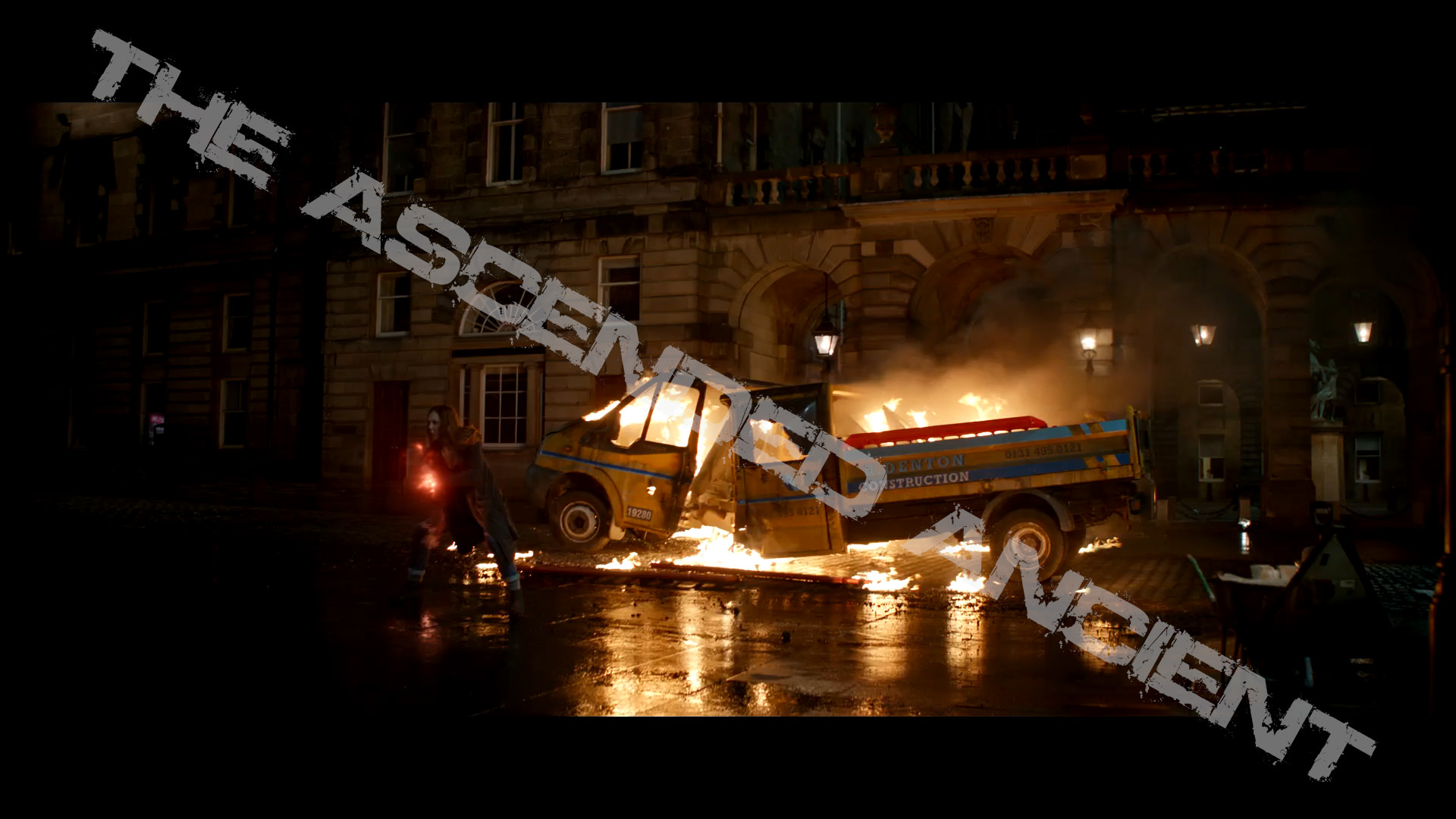 Next up looks to be a set scene. It’s unclear what exactly it is. My best guess is it’s the Collector’s home base on Knowhere. Last we saw of Benicio del Toro’s Taneleer Tivan was in a post-credits scene where he sat in the middle of his ruined collection with Howard the Duck and Cosmo. We do know that the Collector had the Aether in his possession. It’s highly likely Thanos would send his minions to retrieve it from Tivan. 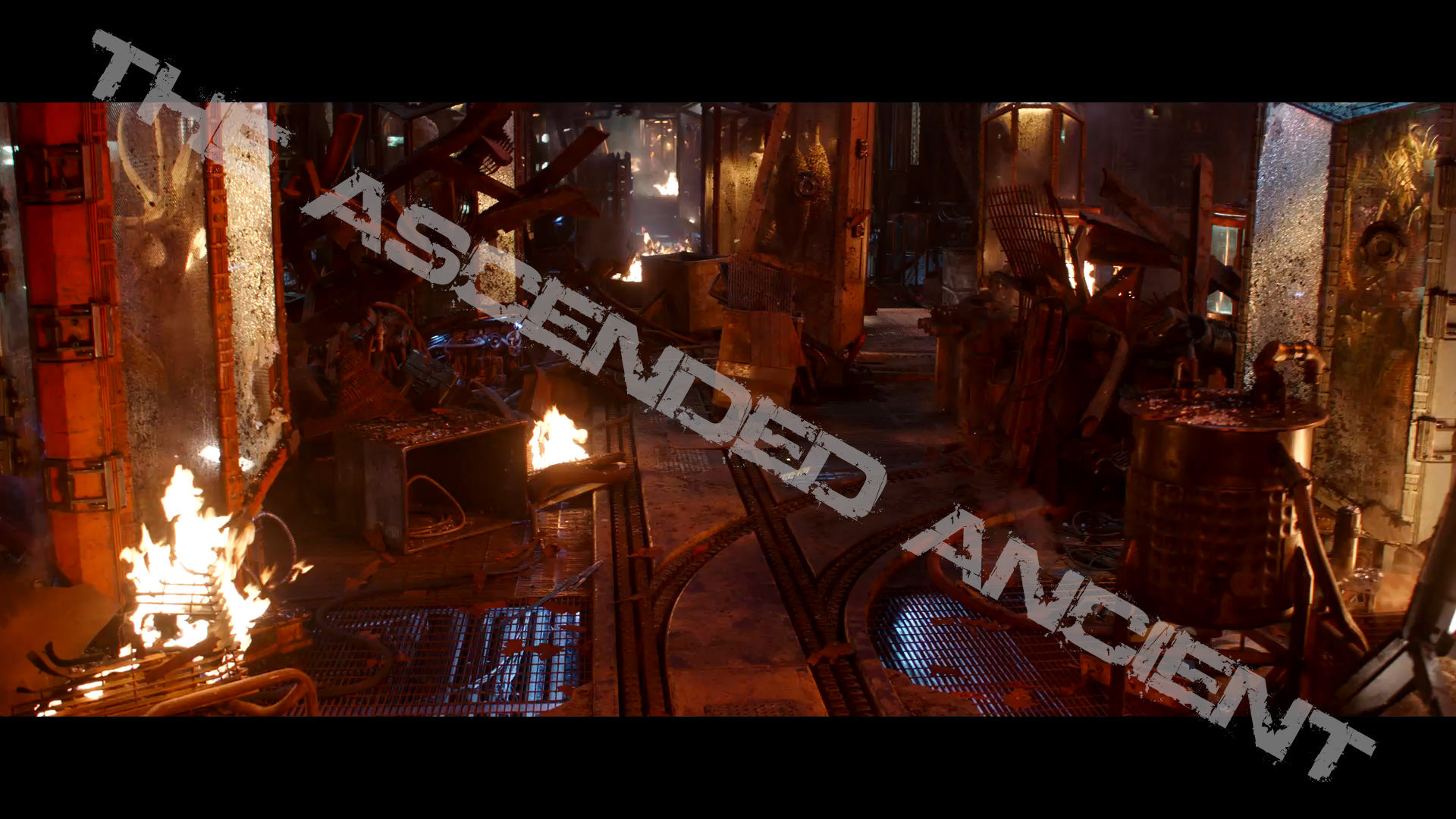 Drax looks super serious in this leaked image. There’s not much to say here. 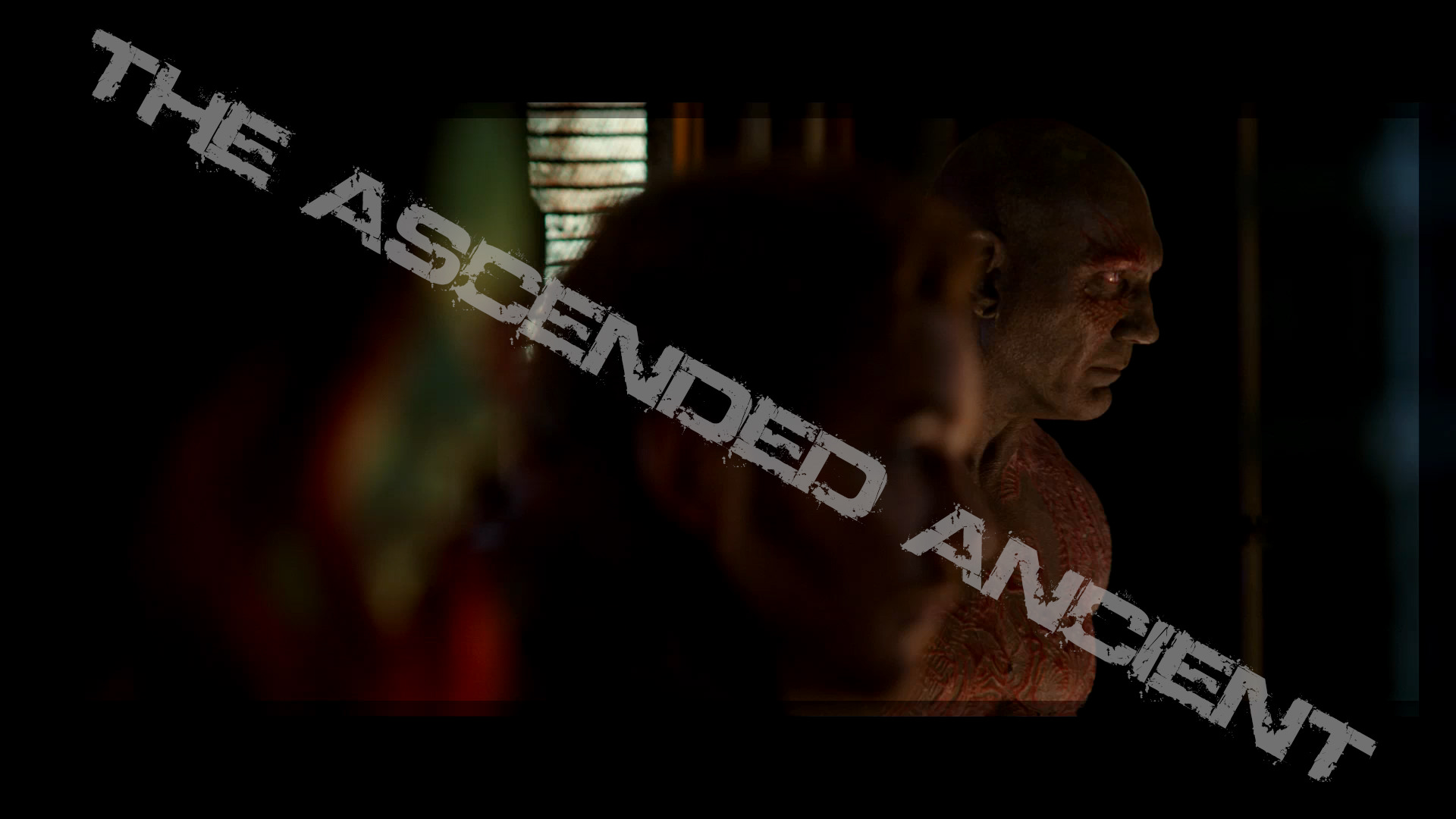 Anthony Mackie’s Falcon flies into action. Maybe it’s just the still of the action, but the person he is attacking doesn’t look phased one bit from Falcon’s boot flying from his face. If this is any indication of the sheer arrogance of Thanos’ minions, the Avengers are up the creek! 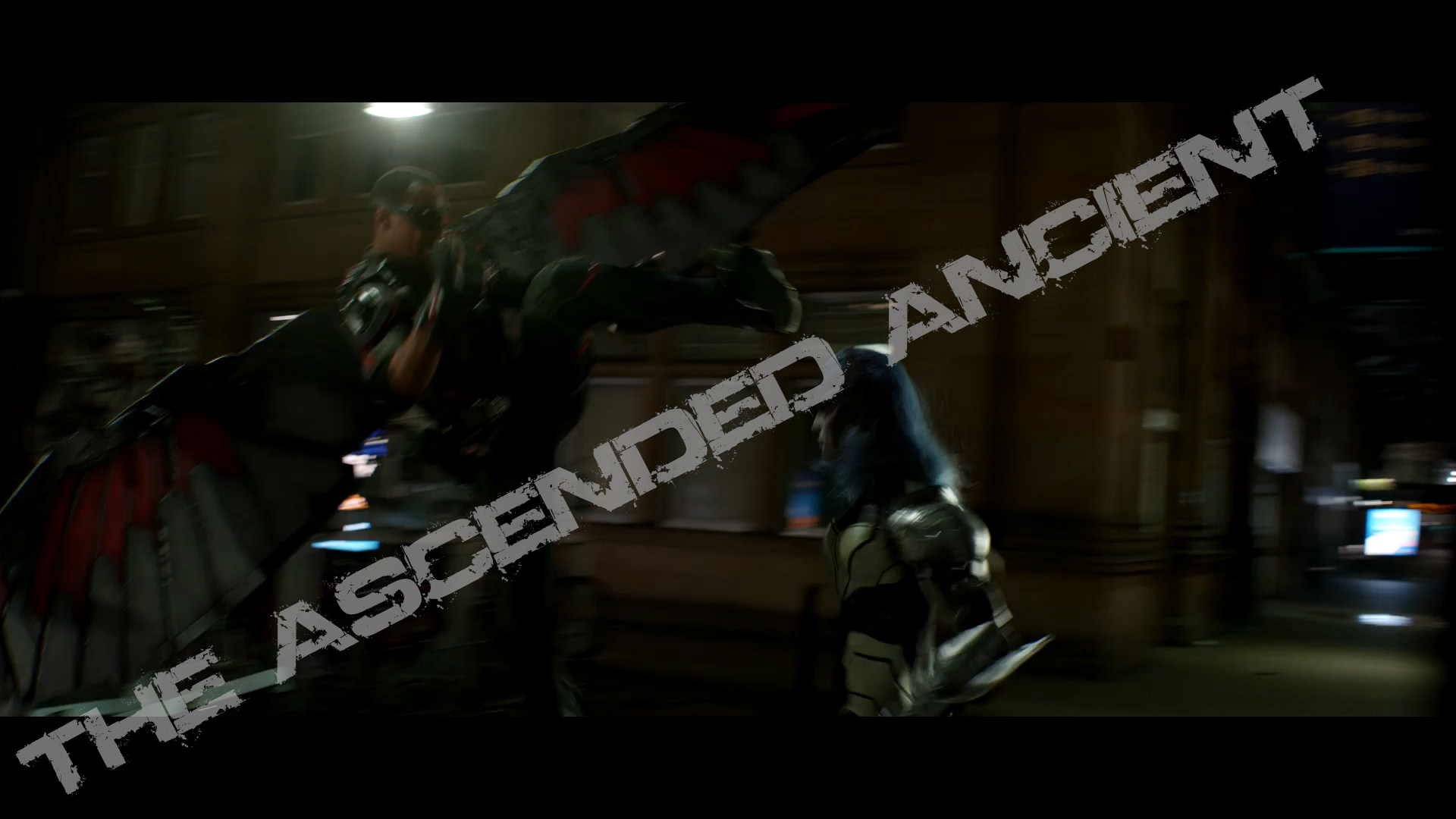 We get another look at Elizabeth Olsen’s Scarlet Witch. She looks distraught and it appears there might even be a tear in her eye. Could she be seeing Vision getting carted off with her being powerless to intervene? 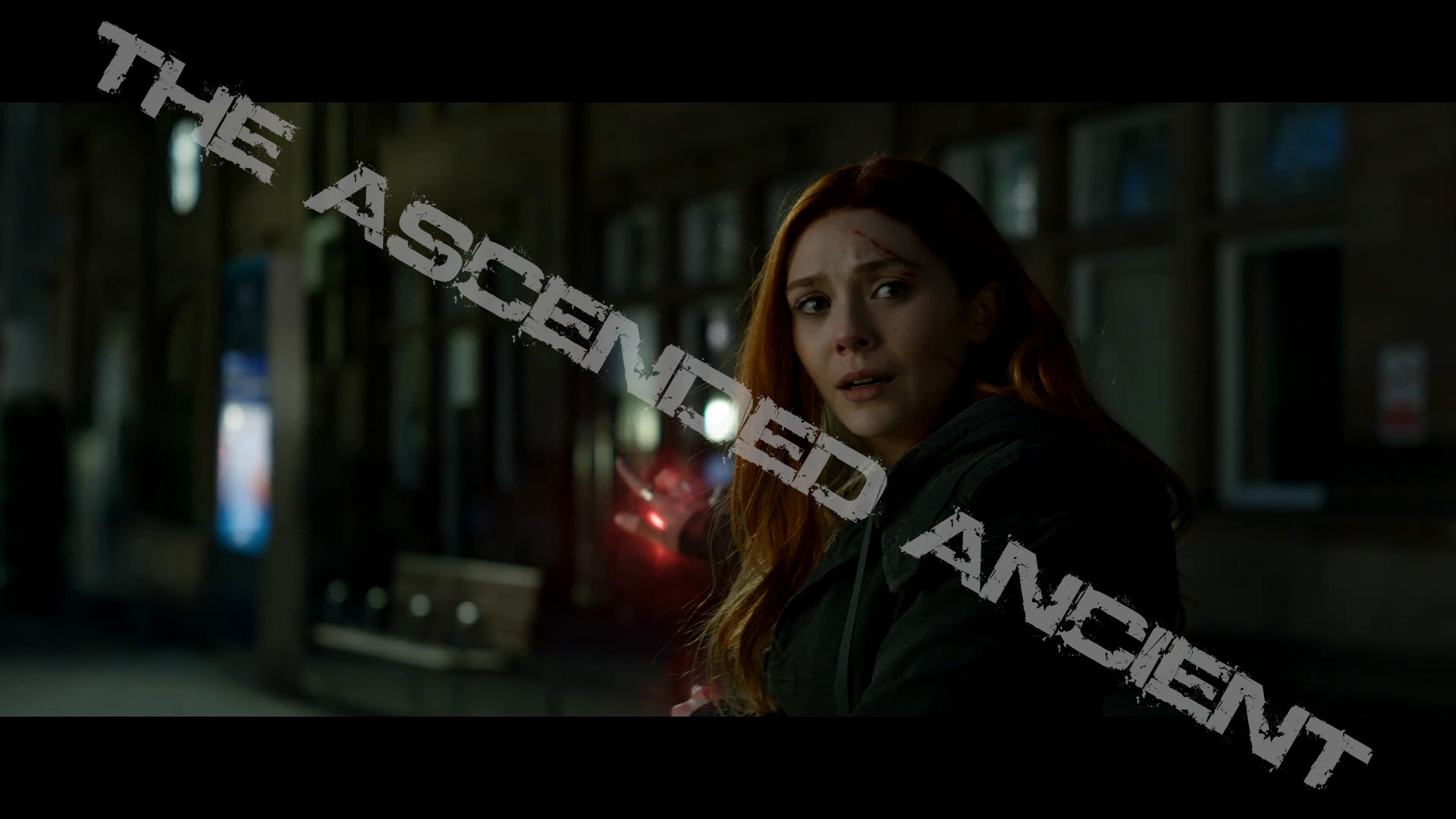 This next image we get is Chris Evans’ Steve Rogers, Scarlett Johansson’s Black Widow and Anthony Mackie’s Falcon. The biggest thing that stood out to me is Captain America’s star appears to be black. Now this might just be a trick of the light, but we haven’t seen a black star on any of his previous outfits. This could lend more evidence to the rumors that Steve Rogers may no longer carry the mantle of Captain America. 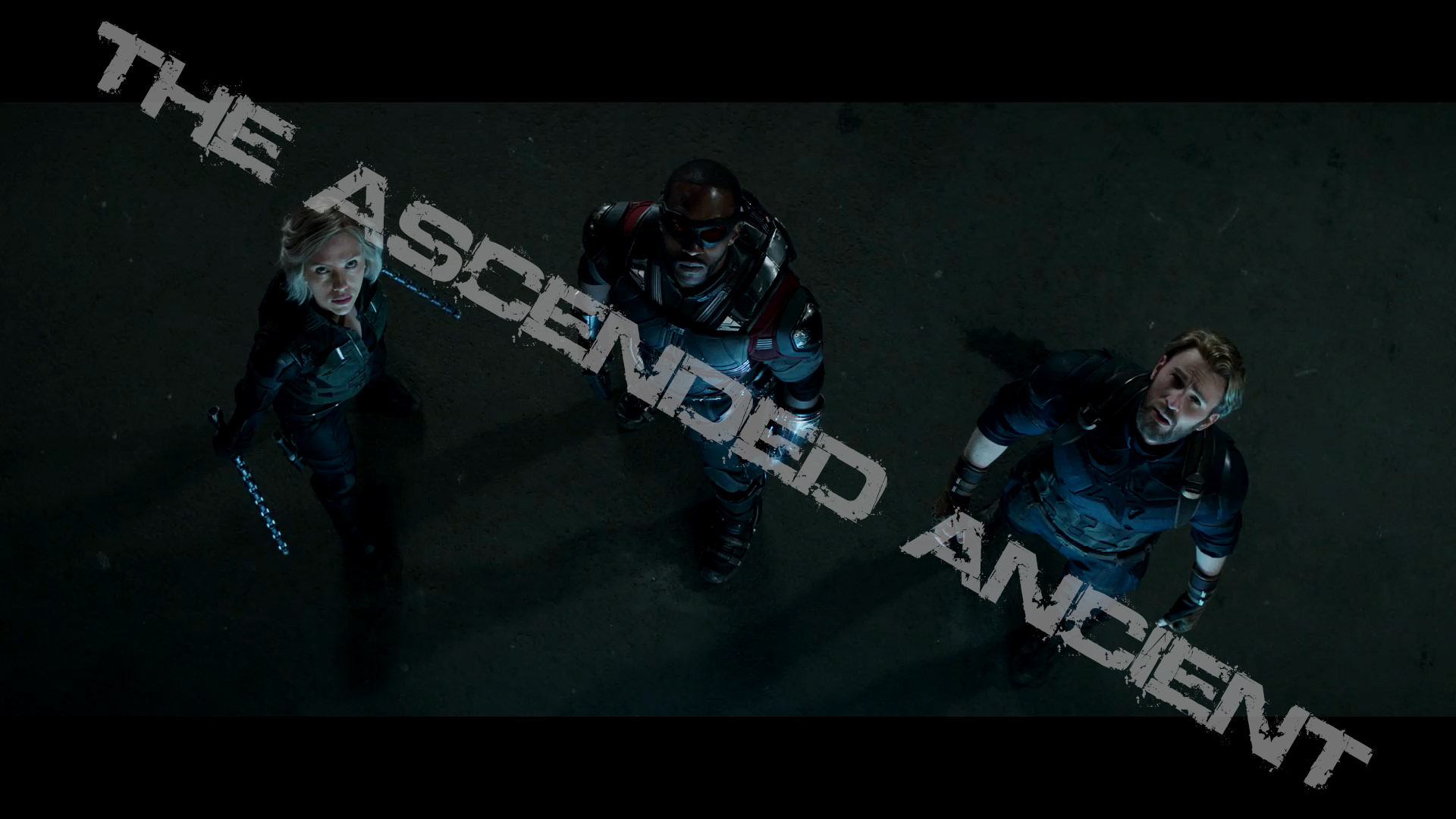 Finally we get two good looks at one of Thanos’ top lieutenants, Proxima Midnight. 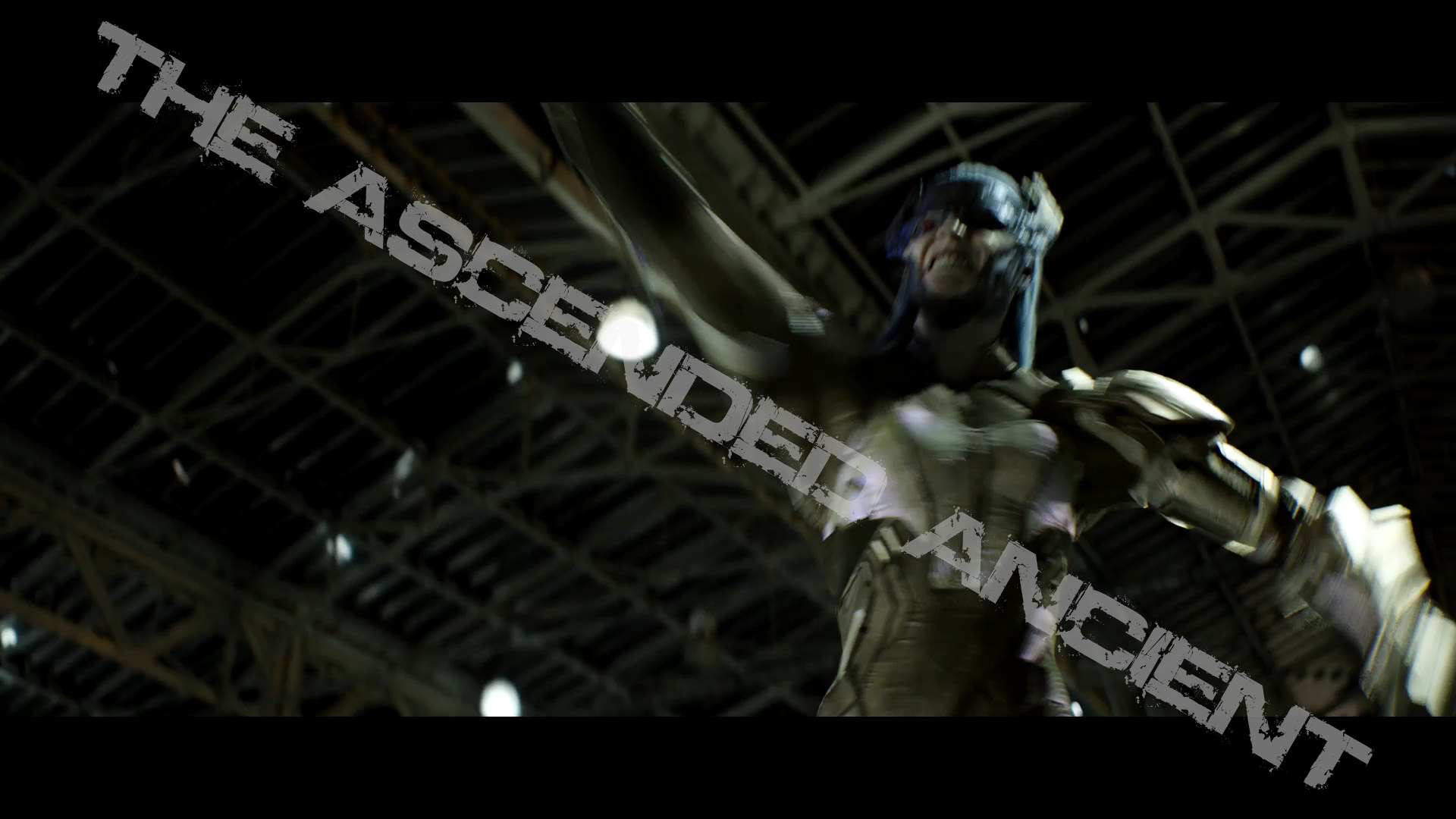 In the comics, Proxima Midnight invades New York City and lays waste to the city and its denizens after Thanos dispatched her to Atlantis to retrieve Namor’s Infinity Gem. She detoured to New York City before going after Atlantis. While in New York City, Proxima Midnight is thwarted by Luke Cage. It’s possible we might finally get to see the Defenders show up when Proxima launches her invasion on New York City. But probably the biggest takeaway from the comics is that the Infinity Stone is not in Atlantis. It’s in fact hidden away in Wakanda. Thanos, Proxima Midnight, and Corvus Glaive, another of Thanos’ lieutenants invade Wakanda and located the stone after Black Dwarf failed to do so on his own. 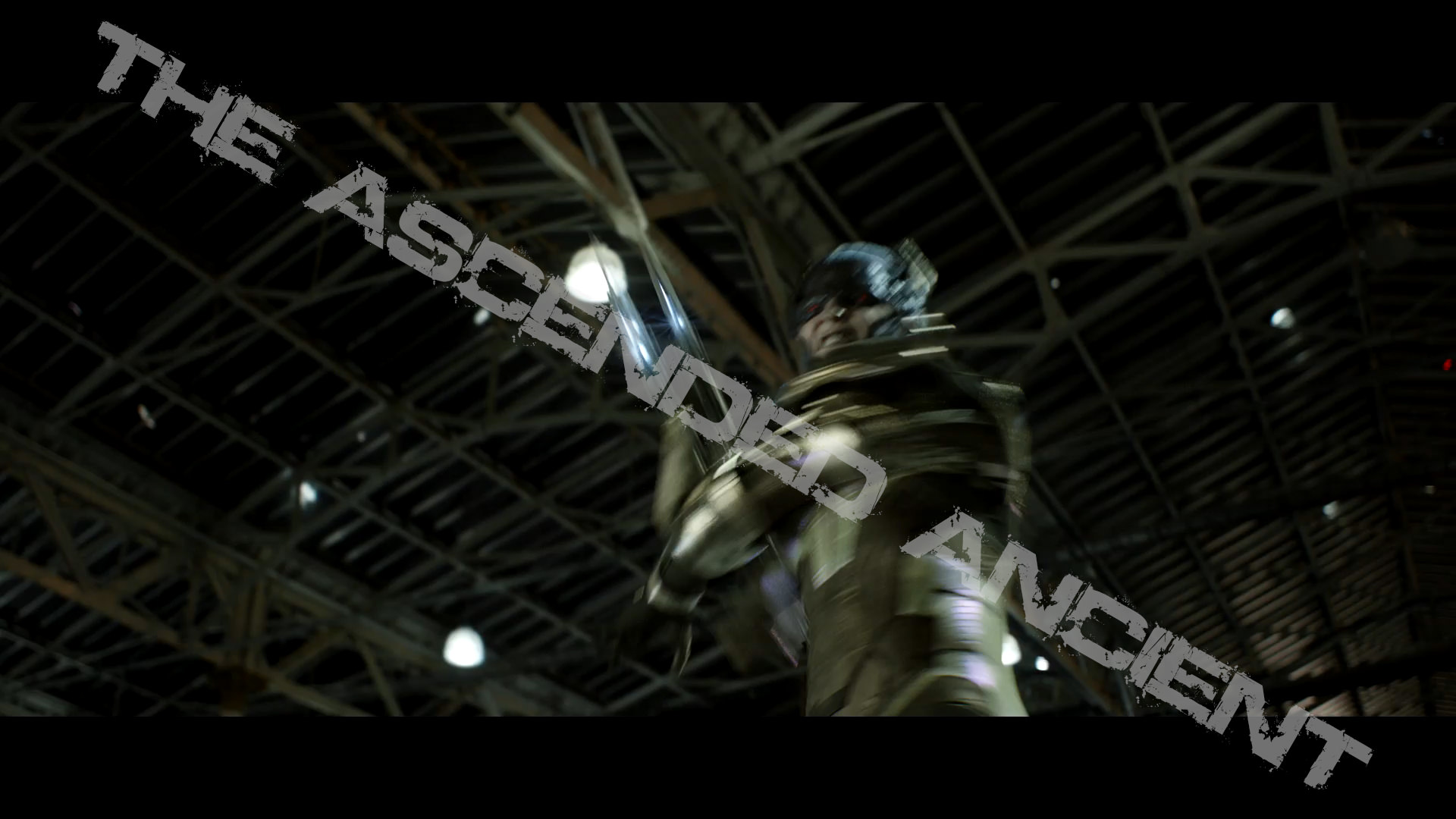