Beware of Spoiler to Justice League, Ye Who Enter Here

Now that Justice League is in theaters it’s time to discuss the ramifications and implications of the film. The post-film sequences have already been dissected, now for aspects of the film itself. One of the more prominent questions about the film was whether or not Hal Jordan or any Green Lantern would appear. Now that the film has arrived we have an answer to that question…

Remember, you were warned.

A Green Lantern (or two) appears in the flashback to Steppenwolf’s first attack on Earth. The Green Lantern is an alien, clad in armor and wearing a cape. Not a uniform familiar to fans of the more standard Green Lantern uniform. Unfortunately, his or her’s presence in the film is relatively short. He stops a parademon or two with a hammer construct before being put down by Steppenwolf himself. Then, the highlight of the scene is the Lantern’s ring quickly zipping away from his body like every Green Lantern comic has imagined them doing. It’s glorious.

There’s a few questions to ponder about this poor, green soul. Their identity. Whether they’re significant in the film. And whether or not their presence has a larger meaning for this world. Spoiler alert: it does.

“No protectors here, no lanterns…”

A declaration made by Steppenwolf in the Justice League trailer. The statement had two meanings. That Steppenwolf didn’t regard the forces of the world as a threat, and that Earth is without any Lanterns of any color. The most famous of which are the Green Lanterns, and the most famous of them is the human Hal Jordan.

Hal is famous for being the first human Green Lantern. Given the ring by a dying Lantern by the name of Abin-Sur, Hal becomes the first human to ever wear one. The guardians, the ring’s creators, are not fond of humans and have never regarded them with much respect. That’s why it’s so important that Hal Jordan, one of if not the most powerful lantern of all time, becomes one.

Many speculated that Hal would make an appearance in the film. Unfortunately, that isn’t the case. Though the Lantern is impressive their presence really only exists to establish their existence in the universe. In fact, it’s difficult to imagine Steppenwolf considering them a threat when he was able to put one down so easily. Nevertheless, Earth didn’t need a lantern to stop Steppenwolf in Justice League. 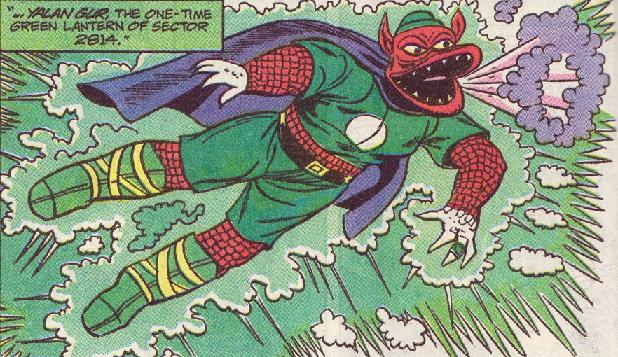 Who was the Mysterious Green Lantern?

Reddit user by the name of StrandingDeath made a comprehensive post explaining the identity of this mysterious Lantern to be: Yalan Gur. Yalan Gur is noted for being one of the most powerful Green Lanterns of his time, which was roughly 2,000 years ago. Unfortunately, Yalan Gur would turn evil after the Guardians removed the weakness to the color yellow from his ring. He terrorized his entire sector, including Earth. Notably attacking China and enslaving its people.

Not the best of the corps.

Instead of this portrayal, the simple nod to the Green Lanterns was very effective. There’s no mention of the terrorizing this character unleashed in the comics, he’s simply a fallen hero laid low by the axe of a monster.

It wasn’t the grand appearance or creation of a Green Lantern that fans were hoping for. But it was a nice nod to the great history that DC has to draw from and it left an open door for one Hal Jordan to someday enter.