It seems that Harley Quinn is going the route of fellow famous Gotham citizen Batman. She’s not only getting her own animated series, but it’s expected to be an R-Rated show that might see Margot Robbie reprise her role as the title character.

According to Deadline, the animated show will be part of Warner Bros. own DC digital platform. So far twenty-six episodes have been ordered in what is described as an adult action comedy starring Harley Quinn.

Since her debut as Harley Quinn in 2016’s Suicide Squad. Margot Robbie has been heavily associated with the character because of her stand out performance as the psychiatrist who fell for the Joker. Though the movie was sub-par on many levels, Margot Robbie’s performance was the best part for many fans who saw the character finally brought to life. Deadline reports Robbie is at the top of the list to voice Harley Quinn in this new series. However, they believe she has not been approached for the role as of yet.

Harley Quinn won’t be the only DC villainess to be featured in this new R-Rated animated series. Poison Ivy is on the top of the list among many heroes and villains from the DC Universe which are slated to appear on the show. This adult orientated animated series will be the third such project in development for the DC digital platform.

Halpern, Schumacker and Lorey will also write the upcoming show. According to the report, the show will center around Harley Quinn after she’s broken up with the Joker. She will seek out a new life and identity of her own without his shadow over her. She’ll even attempt to become the Queenpin of Gotham.

While the show is still in the development phase and there is no official word if Margot Robbie will lend her voice. If not it wouldn’t be unreasonable to think that Tara Strong could once again lend her talents to the role.

Check out some development art for the series. It’s possible the actual art style may differ when the show launches. You can see Harley, Ivy, Clayface, and a host of others. 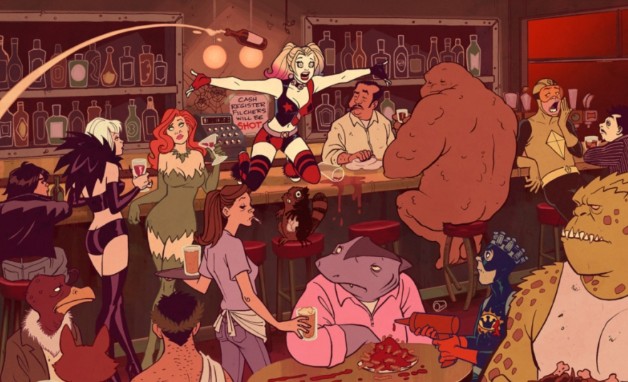 Who would you like to see make a cameo in the Harley Quinn show?