IDW Publishing will remove an anti-Trump panel from their upcoming collected edition of G.I. JOE: A Real American Hero after receiving significant pushback from fans of the series. However, the panel did it make it to the printer for the single issue edition.

This isn’t the first time IDW has found itself in hot water over a G.I. JOE book. Earlier in the week, we reported about Aubrey Sitterson saw his G.I. JOE book cancelled after his disgusting 9/11 Tweet saw significant blowback with many fans vowing not to buy the book.

Now long-time G.I. JOE writer Larry Hama and artist SL Gallant are under fire for scene in G.I. JOE: A Real American Hero #244. The scene depicts a pair of outdoorsmen types recklessly vandalizing a brand new cabin. During their rampage, they go on about how “Folks like us made this country Great!” The book even got political when one of the men begins to carve Trump into the cabin, while the other wears an NRA hat. One of the men even sports a tattoo of the Army of Northern Virginia Battle Flag. 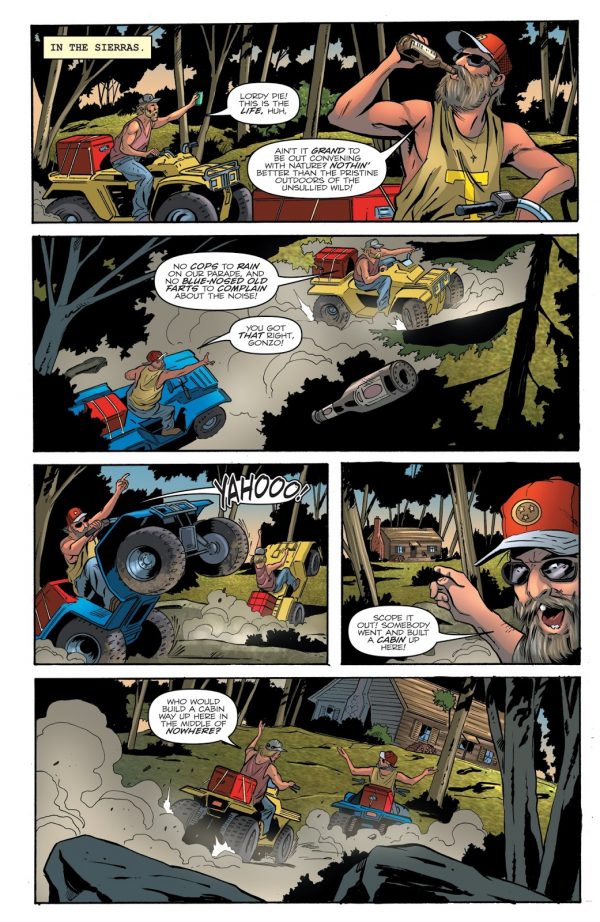 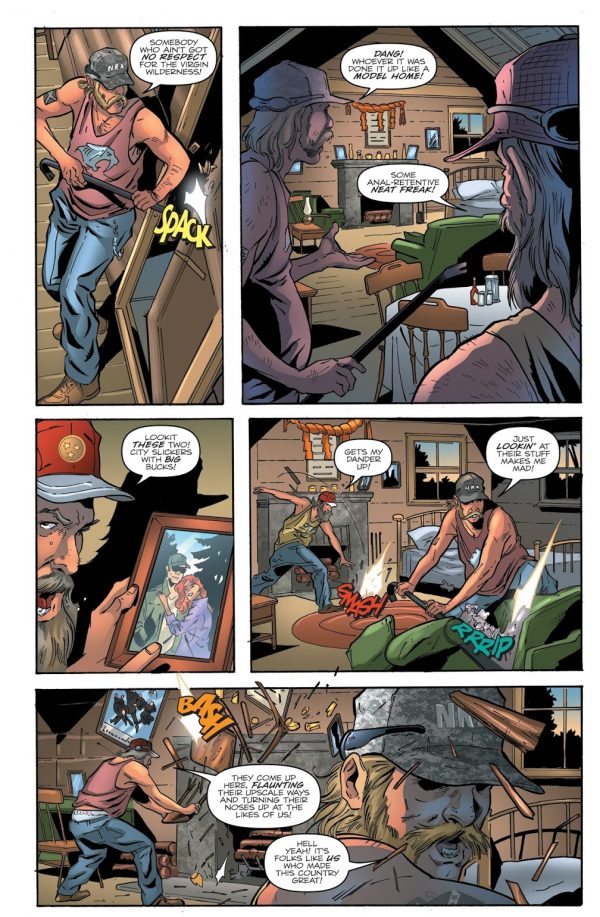 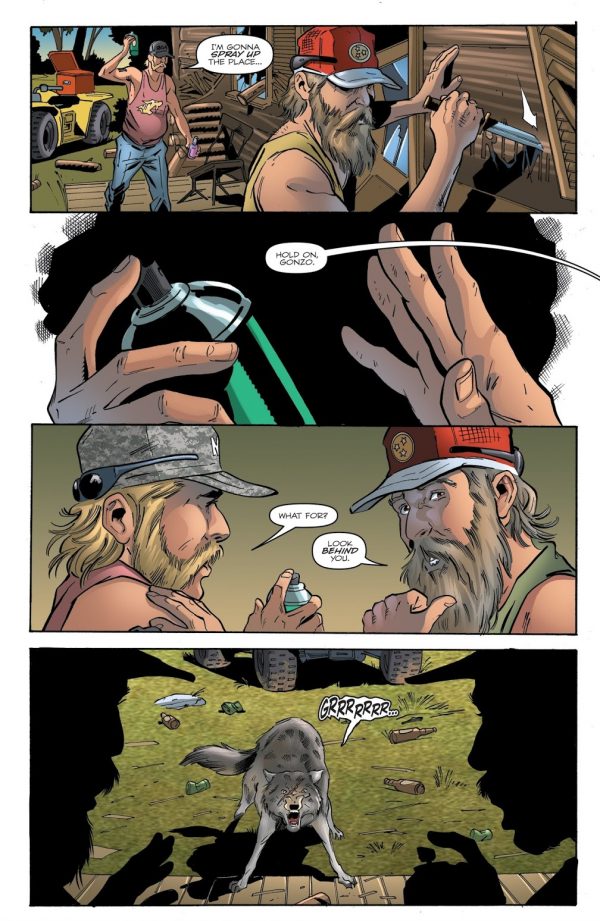 When fans of the comic saw this they weren’t too happy about it. On the Hisstank Forum, a popular G.I. JOE fan website, one member decided this was the tipping point for him and he would no longer be buying the comic.

well, I’m out. Been with Hama since the beginning. tolerated Fake-eyes and Dawn-eyes, but I’m done. I don’t know why politics cannot stay IRL and out of comics. I’m a Trump voter, life-long Republican, hunter, gun owner, from a military family. I have never trespassed or destroyed someone’s home. I respect everyone elses political beliefs. But once again, anyone right of center is characterized as a racist intolerant redneck. the redneck guys with the NRA caps breaking in and carving Trump in the wall…. Ha! This Cultural Marxist propaganda is just funny and most of all tiring. I’m so sick of this anti-right propaganda. I have dropped all DC and Marvel titles. Now I’m dropping this one.

The negative reaction to the portrayal of these two characters had IDW editor Tom Waltz attempt to clear everything up. He claimed that it was a miss understanding and just an inside joke that was missed during the editing process. In a statement he said:

Actually, no. The TRUMP knife-grafiti vandalism was my fault… because I missed it before we sent this off to the printer. It was a silly inside gag (Gallant’s always f’ing with me… he’s like Loki when it comes to being a trickster, and I’d kill him if I didn’t love him like a brother. Wait… does that make me Thor?) that I had made a note to myself to take care of and have modified… then it got lost in the production/deadline rush to get this out to stores.

Why am I telling you this? Not to defend my mistake (these things happen… sucks, but they do) but because it was Larry, when we were putting together the balloons and captions for the issue, who requested we remove anything overly/overtly political in the scene, because despite whatever political leanings he (or anyone involved with the book) might have, RAH (in his exact words to me when he made said request) “isn’t the place for this.” And I (and IDW) 100% agree with him, which makes me even more bummed that I missed it (total disclosure: I didn’t realize I had let it slip through until I read this forum thread).

I wouldn’t dare speak for Larry as to how he feels about anything, politically or otherwise — he’s a grown man, who is fully capable of doing so for himself should he choose to do so. However, I think it’s important I point out facts in this specific case to counter uninformed online conjecture. Larry didn’t want that stuff in the issue. I didn’t either. IDW didn’t either. But… it got lost in the shuffle anyway, and as editor, that’s my bad.

Look — we are doing a lot of stuff behind the scenes here at IDW when it comes to JOE — a lot of exciting things. Personally, I’m so excited for what’s coming with DAWN OF THE ARASHIKAGE, I could wet my trousers! (You guys wanted gritty? Get friggin’ ready!) And despite just about 99.9% of what’s being thrown about online (by folks who have zero clue what we do day-to-day, or who we are as people at IDW… which, if you’re curious, is a VERY diverse group, with everything from young hipsters to old, crusty former Marines like yours truly, and everything in between), I can say without reservation that our number 1 priority is to the properties we are blessed to be working on… as well as finding ways to tell the best stories possible through those same properties… and not some “Marxist propaganda campaign.” Hell, the only campaign I know of here is to get more varieties of coffee in the office kitchen (I keep telling all these wimps to drink it black… problem solved! LOL). Truth is, there are damn good people here at IDW (and over at Hasbro) that I’m proud to work alongside, just as I was once proud to serve alongside a diverse group of Marines back in the day — all differences in races, genders, and political leanings notwithstanding.

My point is, to everyone here on Hisstank: please don’t assume to know what folks are thinking or doing unless you either intimately know them… or you actually ask them and let them explain it to you. Your assumption might just be wrong and when you share those inaccuracies with the vast online world, it only creates unnecessary confusion and animosity. I’m not trying to scold or berate… I’m just letting you folks know that we are all on the same team here — the team that wants to bring G.I. JOE back to the glory (guts and glory!) and prominence it deserves. And I promise — we’re working on it every single day!

As for Larry? Larry bleeds G.I. JOE. And I’m learning so much from him — all of it good and honorable. You know who else bleeds G.I. JOE? SL Gallant (the trickster bastard). That guy’s one of the biggest JOE (and overall 80s nostalgia) nerds I know! Hell… all the gang: Brian Shearer, James Brown, John Royle and his team… they LOVE being on this book. (And they aren’t done yet… look for a cool announcement at NYCC… hint, hint.)

And I know you all bleed JOE, too, so please accept my heartfelt thanks for supporting us through thick and thin… the best is yet to come!

The speed of this response and how it was done is quite telling. Maybe some comic book publishers are finally realizing that you cannot demonize your readers and expect them to hand over their hard earned money. No amount of Stockholm Syndrome will make that work.

Tell me what do you think? Harmless fun, or just a rehashing of the same old same old. Let us know in the comments below!